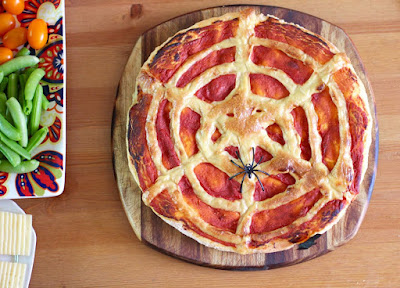 I recently tried Vedged Out's vegan mozzarella.  It was amazing.  The cheese crisped up on the outside and was gooey and cheesy on the inside when baked on a tart or melted on toast. But we don't stand still in the rapidly changing digital world.  I saw a similar vegan mozzarella recipe which used aqua faba.  I tried it, incorporating some of the Vedged Out components.  This was even better because it had strings! 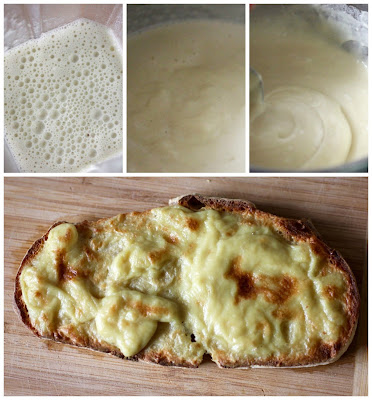 Yes strings!  Strings are the ultimate in vegan cheese.  Finding the taste is not so hard but finding the texture is so hard. And to be honest, I have never been a big fan of the taste of mozzarella.  It is a bit bland.  But I love the strings.  You can see by all the pictures I took of strings below that I was pretty excited.  I also had to check it worked in melted cheese on toast.  And I am happy to report: affirmative! 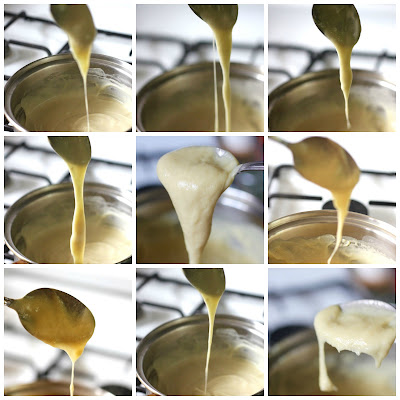 My first experiment with the mozzarella was to try it in a tomato, zucchini and corn galette (based on Joanne's tomato and corn galette).  It was good but the zucchini just would not soften.  I quite liked the mozzarella spread on the base of the pastry and some more dotted on top.  In fact I have revisited the amazing galette pastry with beetroot and will share that soon. 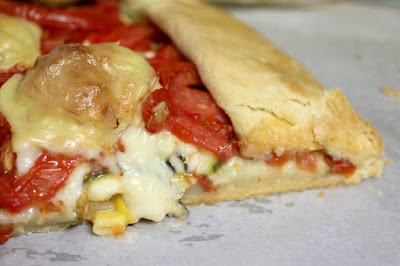 A week or so later I made the mozzarella again for pizzas for our Halloween lunch.  I found the idea on Vie de la Vegan where Kyra made spider web pizzas.  As soon as I saw it I wondered if the vegan mozzarella would work.  In fact I was a little nervous when I tried it as I was not sure how much it would spread.  Turns out it holds its shape well.  I just piped it using a zip lock bag snipped at the corner. 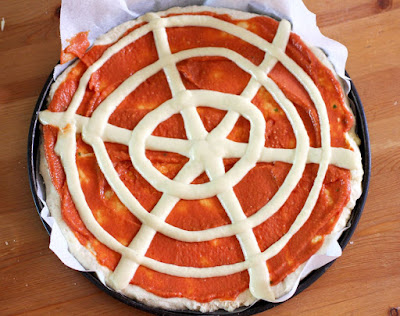 Sylvia insisted she would not eat vegan cheese.  So I made a pizza for her and the children.  Fortunately the adults all loved the vegan cheese pizza.  I used some sourdough starter in my fast track pizza for the bases.  Leaving the mixture for a couple of hours made for a thick airy base.  I whizzed up some pumpkin hummus in with tomato paste, a tin of tomatoes and some extra seasoning to make the sauce. 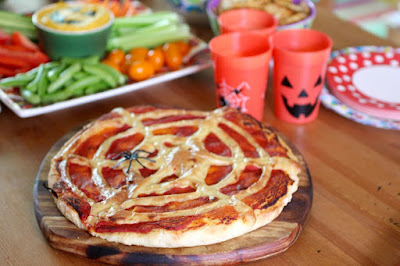 So with the search for a vegan mozzarella over (until the next viral trend), you can relax as I tell you a story about spiders.  We bought some plastic spiders and cotton wool spider webs for the Halloween lunch.  A couple of nights later I looked up and asked who had put the spider up high on the window.  We all looked at each other puzzled.  And [cue spooky music] then the spider moved.

I will make the bold claim that this vegan mozzarella would be as cunning as the plastic spiders in standing in for the real thing.  And it is can be piped in shapes which make it even superior to regular mozzarella!  And did I mention it uses ingredients I always have in my pantry (the nutritional yeast flakes can be optional if they are hard to find.)  I am in love with the stuff.

I am sending this pizza to Kimmy for Healthy Vegan Fridays #72, Jac for Meatless Mondays, and Lucy and Lauren for Fabulous Foodie Fridays #76.

More fun pizzas on Green Gourmet Giraffe:
(How many of these would be great with this mozzarella cheese for decoration!)

Blend all ingredients in a high powered blender.  It will be a really thin liquid.  Pour into a medium saucepan and heat over medium heat, stirring fairly frequently.  (Ideally stir frequently but I was cleaning my blender at the same time so you can get away with a break every now and again.)  The mixture will become lumpy on the way to becoming smooth.  Just keep stirring and have faith.  It will take a few minutes.  Once it thickens and becomes smooth and pulls away from the pan while stirring it is good to use.  The mixture can be kept in an airtight container in the fridge for a few days.

*NOTES: I have a high powered blender.  If you do not have such a blender you might need a little less water and also need to drain the blended ingredients to take out any chunks.  I used the water drained off a can of chickpeas.  If you use the water drained off home cooked chickpeas you might need more salt.  If you want to grate the cheese, you can add some agar and set it in the fridge in a ramekin.  It might be easier to grate if frozen.

On the stereo:
Sometimes I Sit and Think, and Sometimes I Just Sit: Courtney Barnett
Posted by Johanna GGG at 14:37