Halloween cheesy snacks, reflections and the dangers of Pinterest 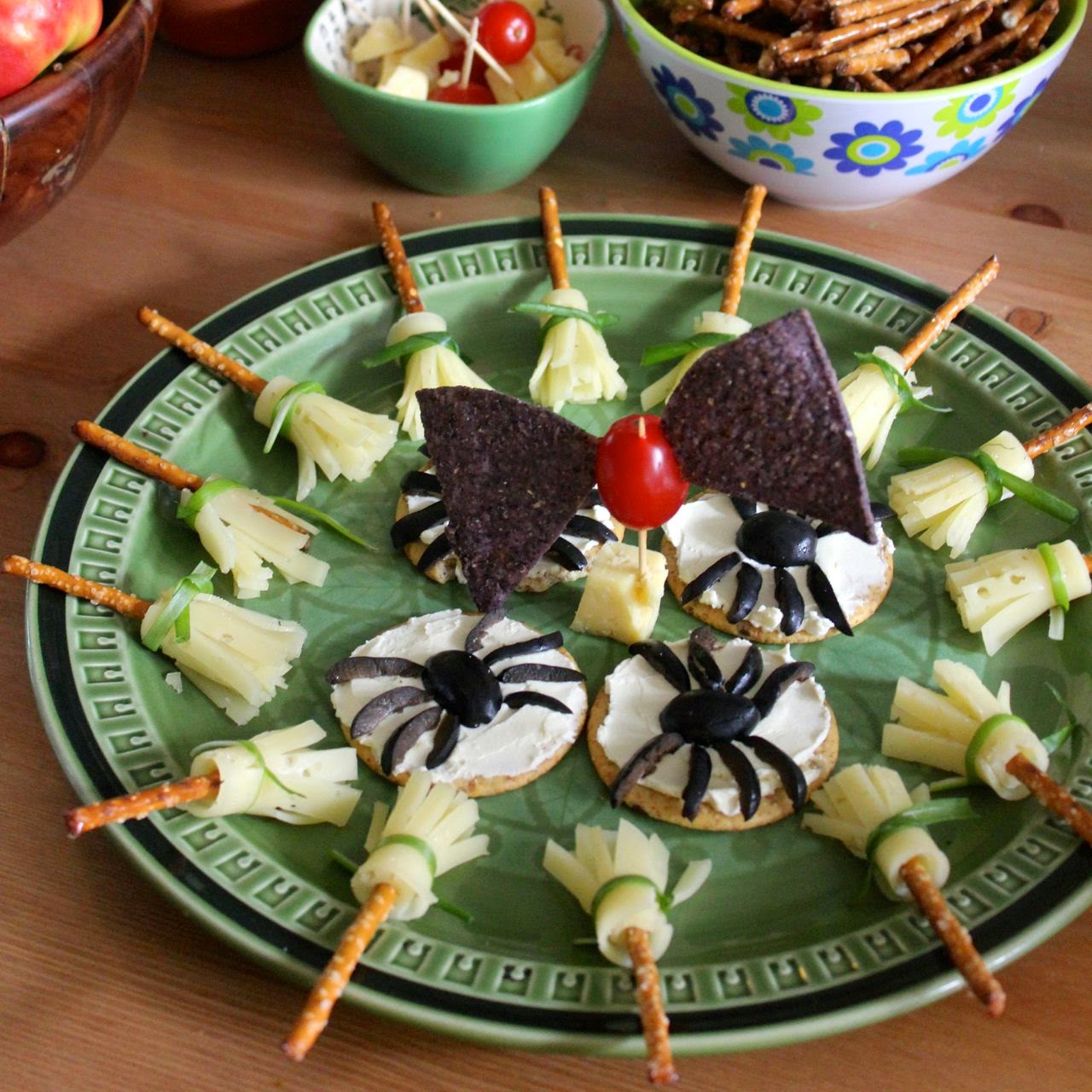 In Australia we are fond of saying that Halloween is an American import.  In my house, E says that Halloween originates from our Celtic heritage.  It is not something I grew up celebrating.  I was in the supermarket on 31 October and was shocked at how pillaged the lolly aisles looked.  Halloween is a growing tradition here but we are still uneasy about it.

I have mixed feelings about posting Halloween recipes here on my blog.  I enjoyed the Halloween pumpkin cupcake at True North in the above photo.  Yet commercialisation of the day makes me uncomfortable.  Halloween is very much about remembering the dead in our house.  I grew up with the Catholic tradition of All Saints Day and All Souls Day.  The 31 October is the eve of the birth and death of Alex and Ian.  We remember our sons with a lunch and cake on their birthday each year. 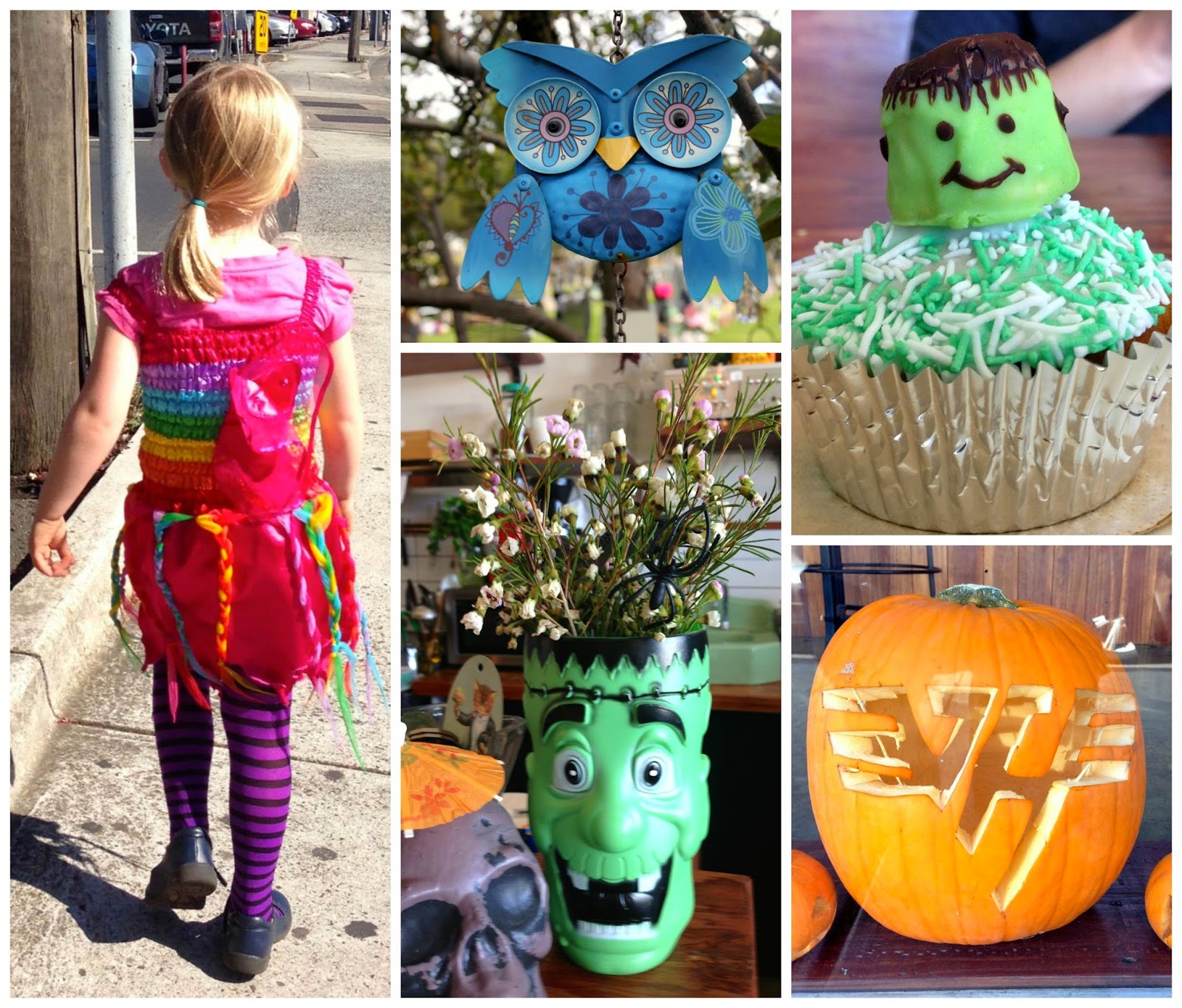 Then there is our 5 year old Sylvia who loves all that is spooky and scary.  And so I too cannot resist some of the fun of Halloween.  After all, death is not all about sadness.  (TS Eliot said, in my beginning is my end, but he might well have said in my end is my beginning!)  She is starting to get excited at planning this birthday meal with us.  We invite our family each year and this year Sylvia invited a school friend too who came with her mum and little sister.

Some Halloween themes are creeping into the birthday food.  I have started collecting ideas on my Halloween Pinterest board.  Which had me dreaming of all sorts of weird and wonderful food art.  When I told Sylvia that we would make some Halloween snacks, she was so excited. They looked like lots of fun to make.  While I am sharing them here, I warn you that they were not as simple as they looked on Pinterest. 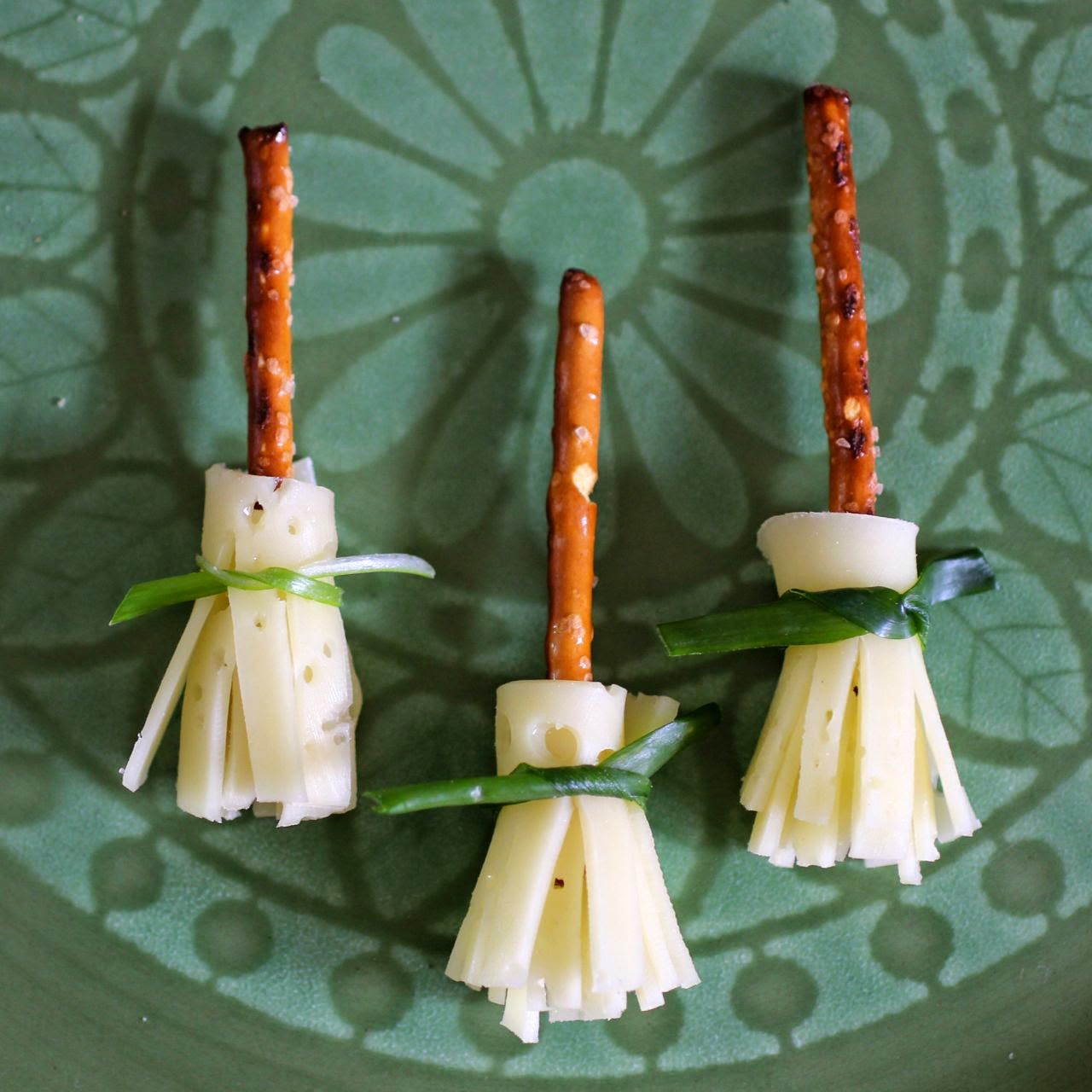 All morning yesterday Sylvia kept asking when we would make broomsticks.  I waited until about an hour before everyone was expected.  It seemed quite a simple recipe.  Perhaps it would be even easier if we had string cheese that seems quite popular in recipes in the USA.  Instead I followed the instructions on Kidspot.  They make it look pretty easy too.

The cheese on the first few broomsticks I made crumbled and the chives broke when I tried to tie the cheesy bristles onto the pretzel broom handles (which were small because that was all I could find).  I finally got the hang of it with spring onion ties but it was too hard for Sylvia. 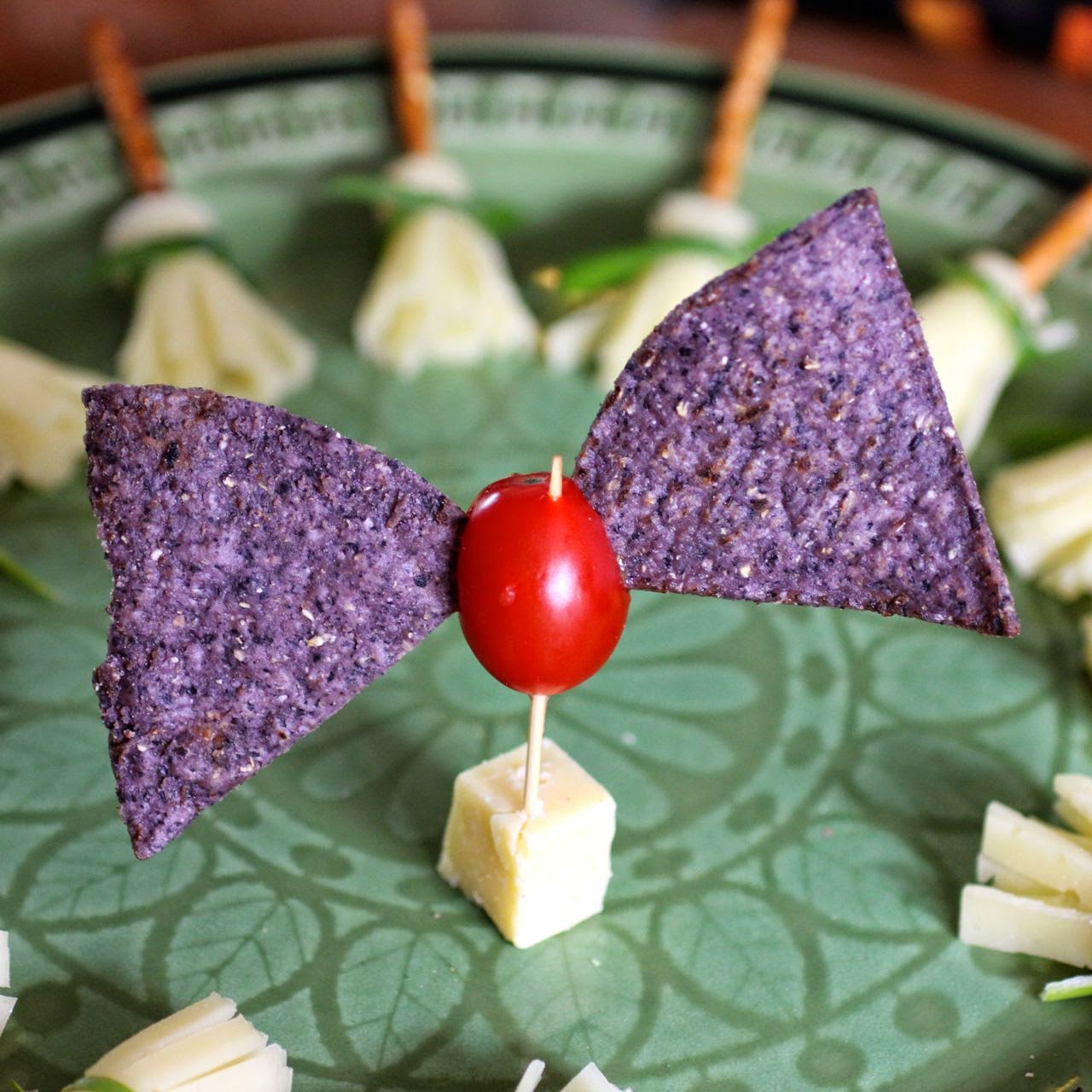 No matter, I said to Sylvia, you do the bats.  Poor child!  These were probably our biggest failure.
I saw a pin where someone used dark grapes with blue corn chips for wings.  It seemed a good idea to use cherry tomatoes and hold the bats up by shoving the toothpick into a chunk of cheese.

I apologise for only sharing a photo of the one bat we managed to get to stand up for a while.  It was too difficult trying to get the rest to stand up - if the cherry tomatoes weren't so big that they fell over, the corn chip wings either drooped or were too heavy for the poor wee tomatoes.  I wont be doing these again.  Though the one that worked did look impressive overseeing the platter like an edible dark lord! After the broomsticks and bats drove me a little batty, I went easy with these olive spiders.  I really liked the idea of putting olive spiders on a pizza or a little cheeseball.  But they were too much work.  I had the ingredients for the cheeseball but in the end I took the shortcut and just spread cream cheese on a round cracker and cut up black olives in a spider shape.

If I had had more time I would have made more.  However I accidentally bought ones that weren't pitted which created challenges with cutting them up.  I only made four of these because I was running out of time.  They looked too good to eat and so I never tried one.  All I can say is that a few hours later when we were clearing up the crackers were really soft. 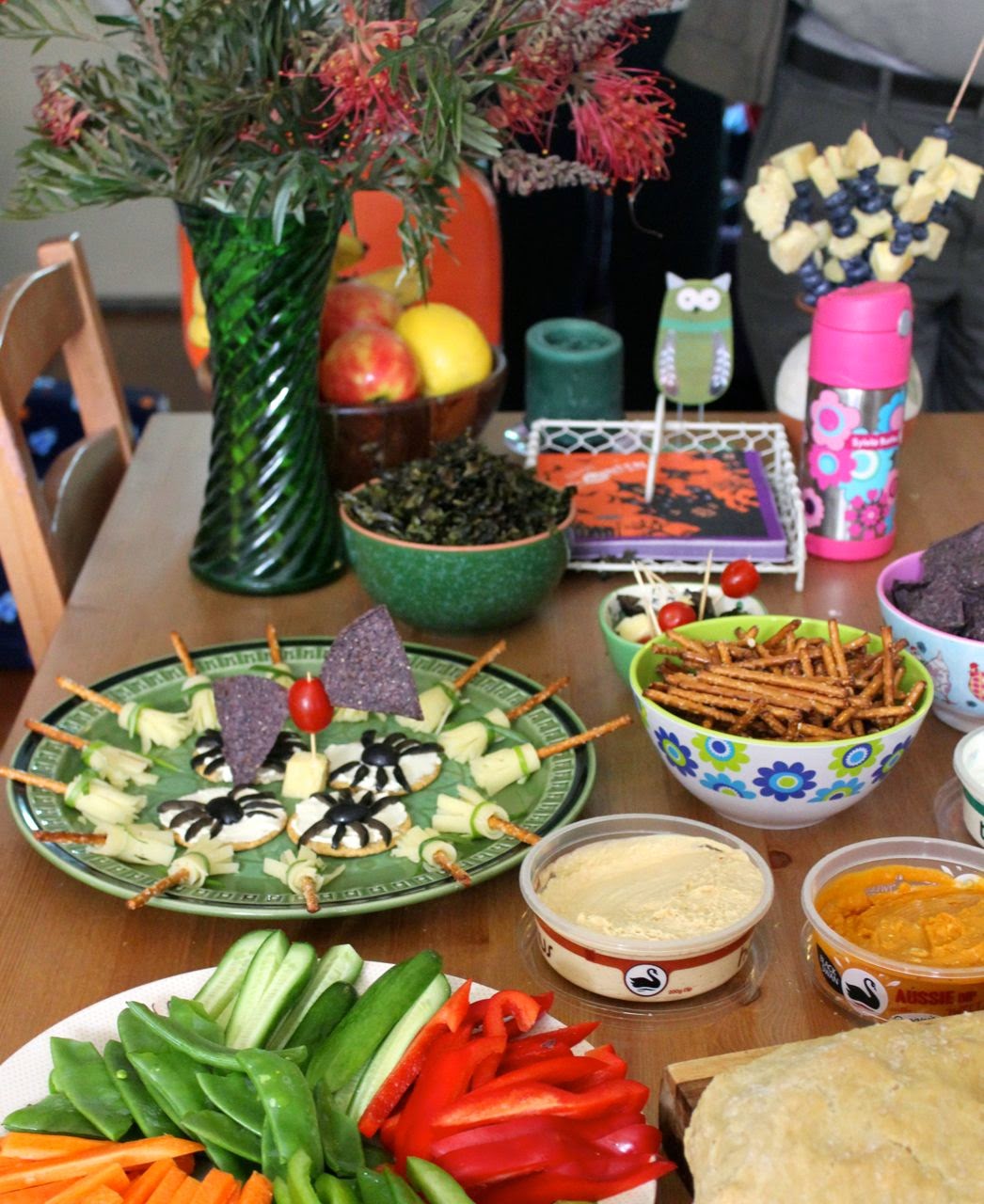 Despite all my complaints about making the Halloween snacks, they weren't too time consuming and delighted the kids.  I really enjoyed eating the broomsticks.  All the snacks made a fine and fun contribution to a simple lunch of vegies, sourdough focaccia, pretzels, blue corn chips, dips and some kale chips that was brought along by Sylvia's friend's mum.  Naomi also kindly brought the lovely flowers from her garden.  And a good time was had by all.

I will post the monster cake and monster rice krispies from the lunch in the next day or two.  Meanwhile, though you can also find them all over the blogosphere, here is my take on the cheese and pretzel broomsticks.

Firstly take the floppy green end of the spring onions (trimming off any manky bits) and use a sharp knife to cut longways into very thin long pieces of spring onion.

Take a square of sliced cheese and cut in half.  Use a sharp knife to cut slits into the cheese to make a fringe on the bottom half of the long edge.  (I found it easier to handle if the slits were about 0.5cm and did not got any further up that halfway towards the top of the rectangle.)

Place broomstick on a plate.  I found mine quite fragile so it was best to put them where they were going to be and minimise handling.

On the Stereo:
Deserters Songs: Mercury Rev
Posted by Johanna GGG at 22:58