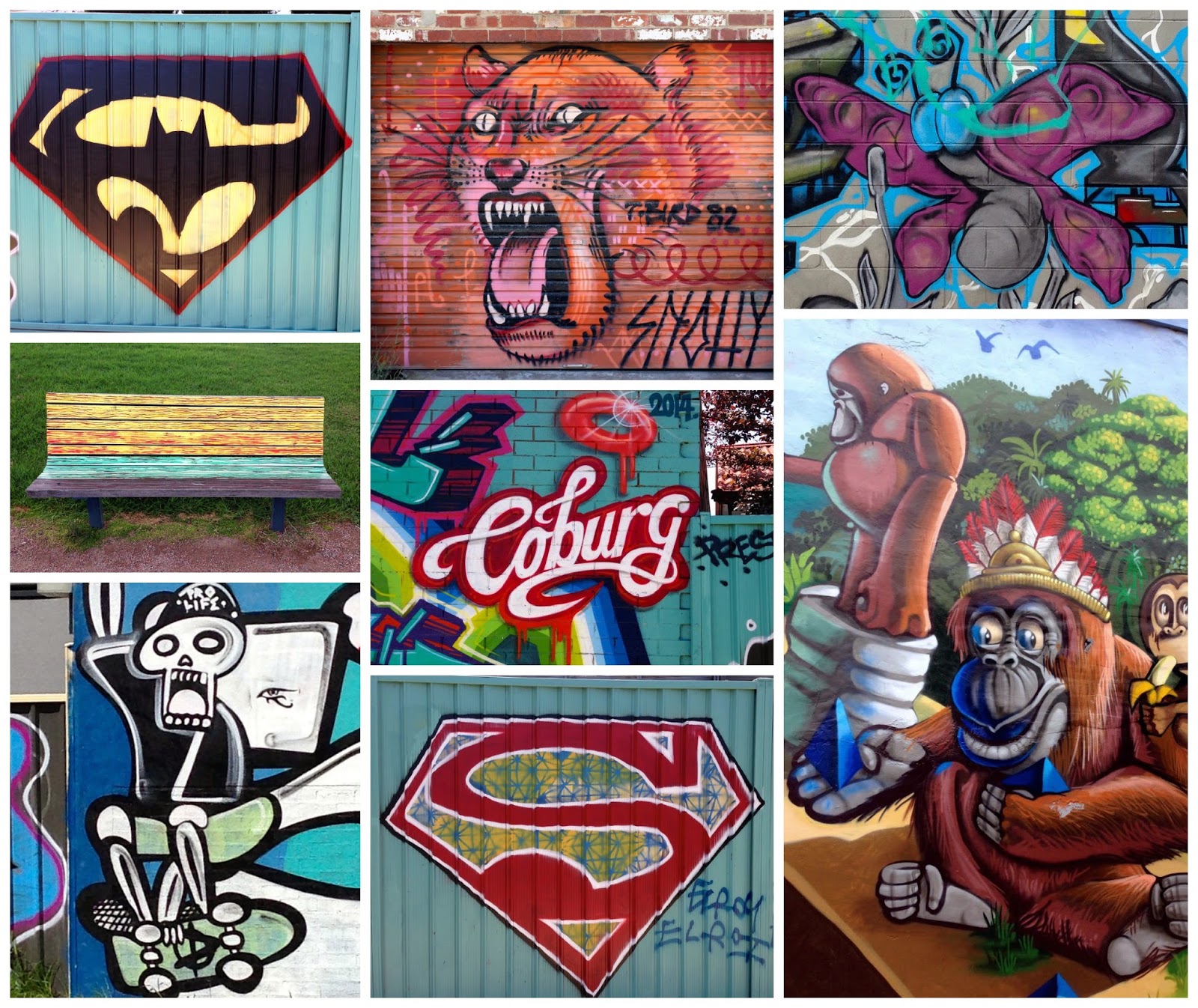 A few years back a friend commented that there wasn't any street art in Coburg, in the inner north of Melbourne.  It all was happening in neighbouring Brunswick.  However Coburg is changing.  It is now a suburb boasting gentrified residents with money and time and a love of art.  And Moreland City Council also supports street art in Coburg as can be seen right now with MoreArt 2014. 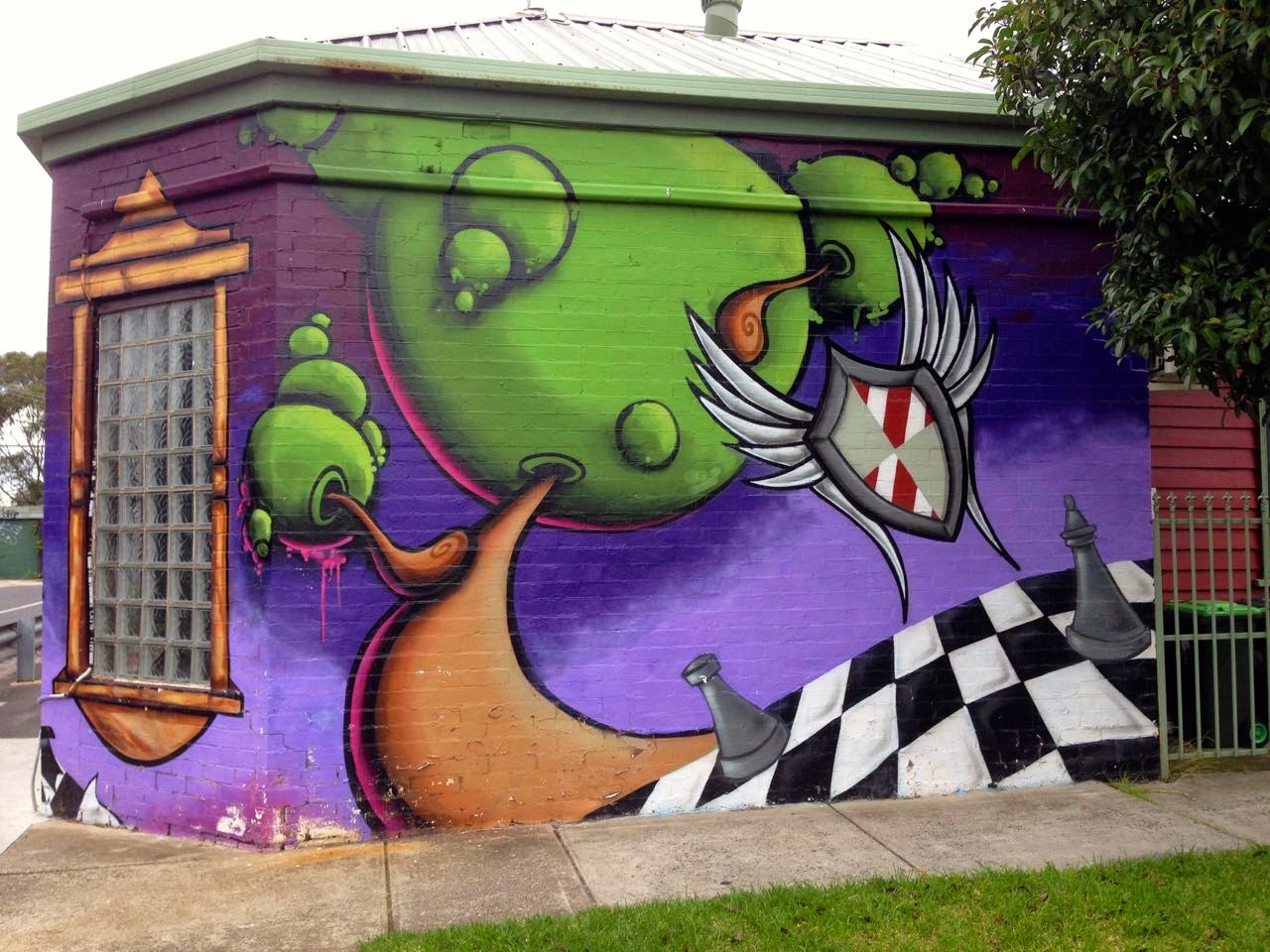 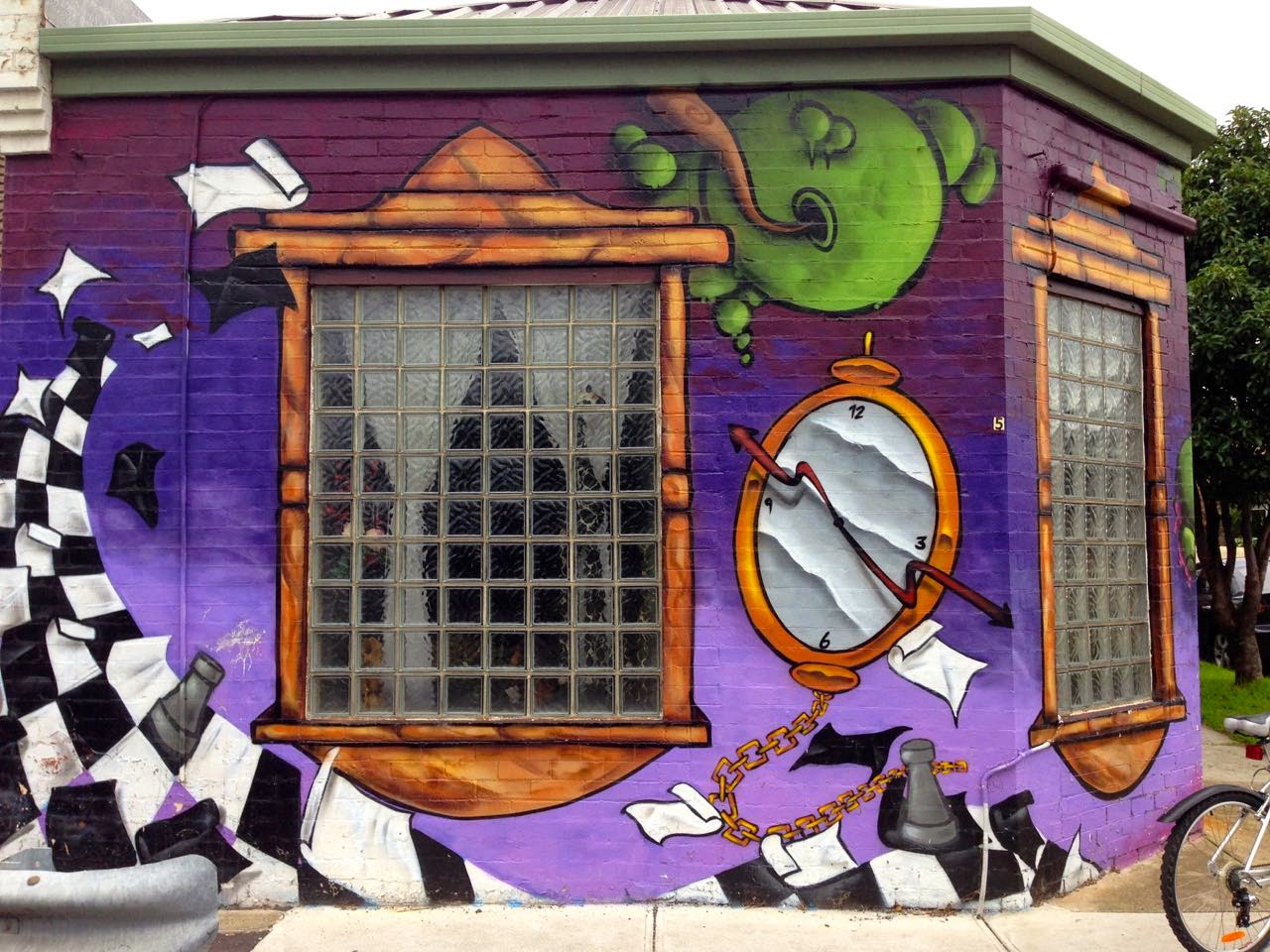 Let's start with this colourfully painted house on the Upfield train line. 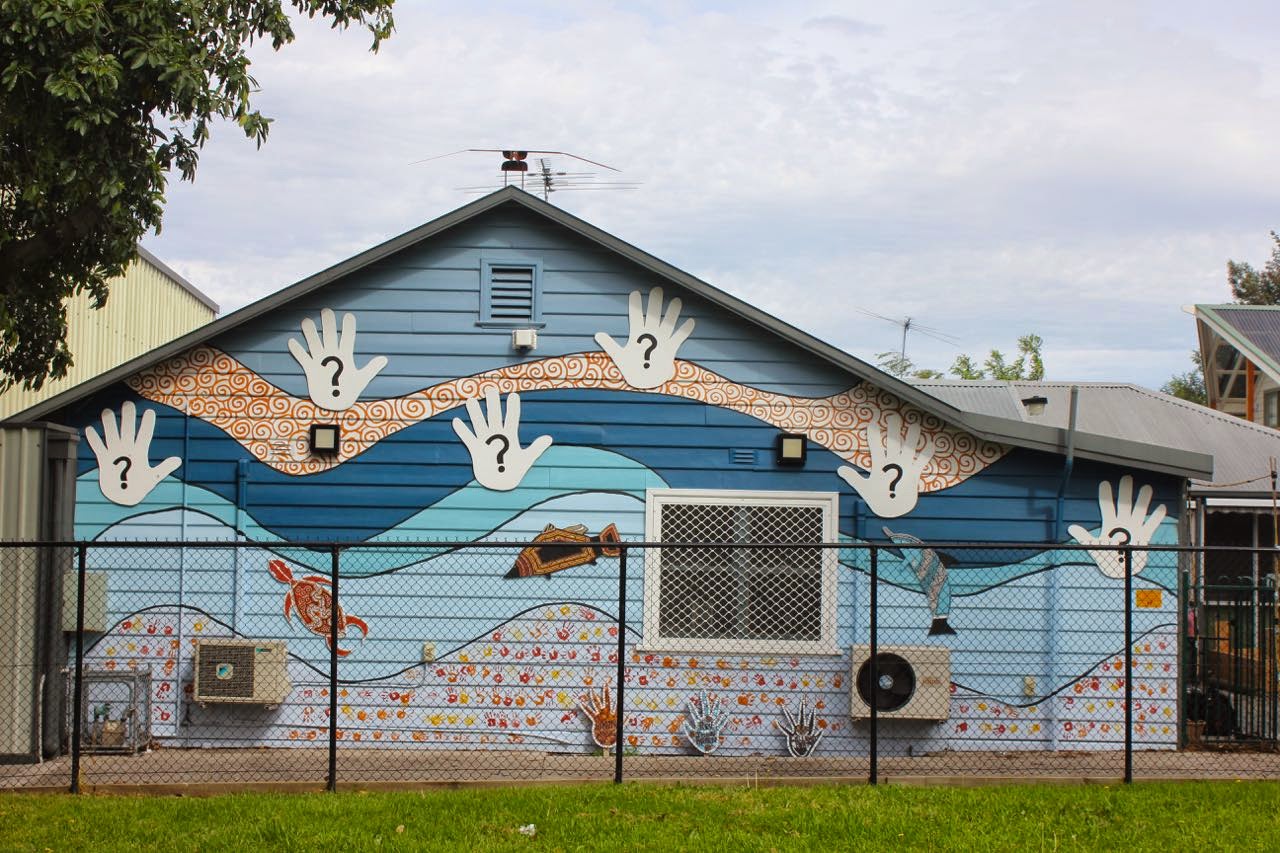 I really love this Recognise mural that can be seen from the park on the wall of the Robinson Reserve Neighbourhood House. 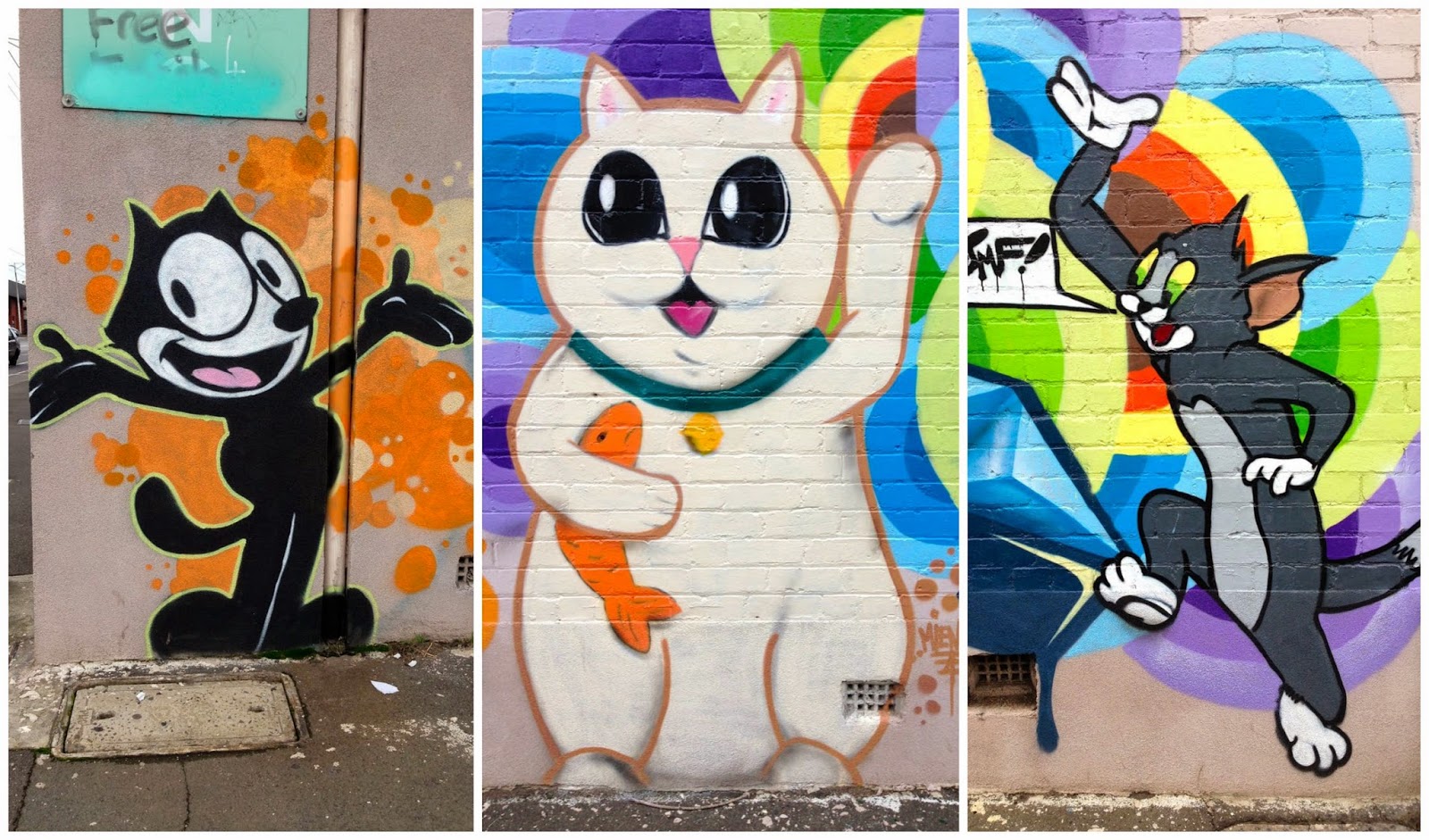 These three cartoons are on the wall at Woollacott Street. 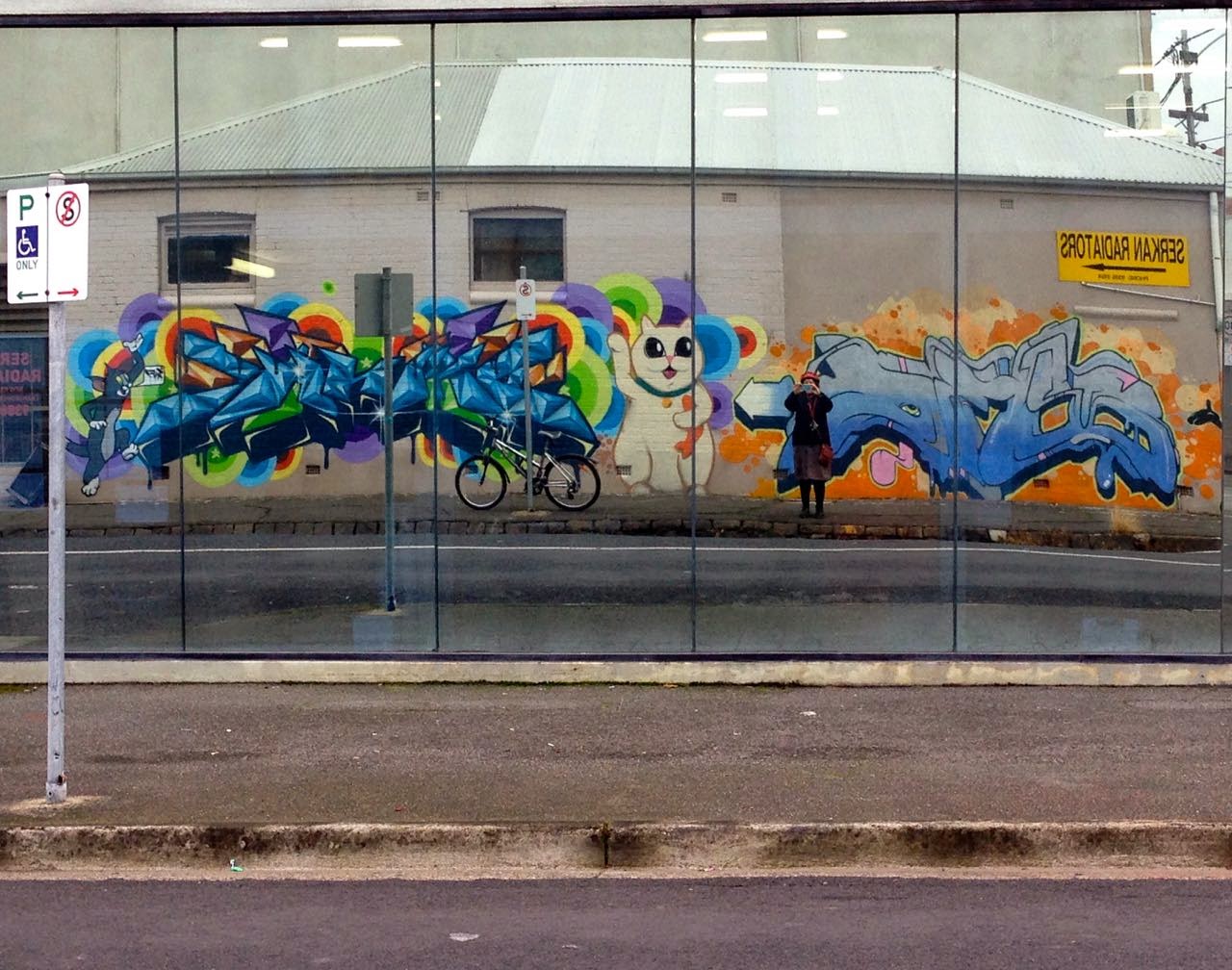 Here is the full wall on Woollacott Street.  (And yes that is me and my bike in the mirrored image!) 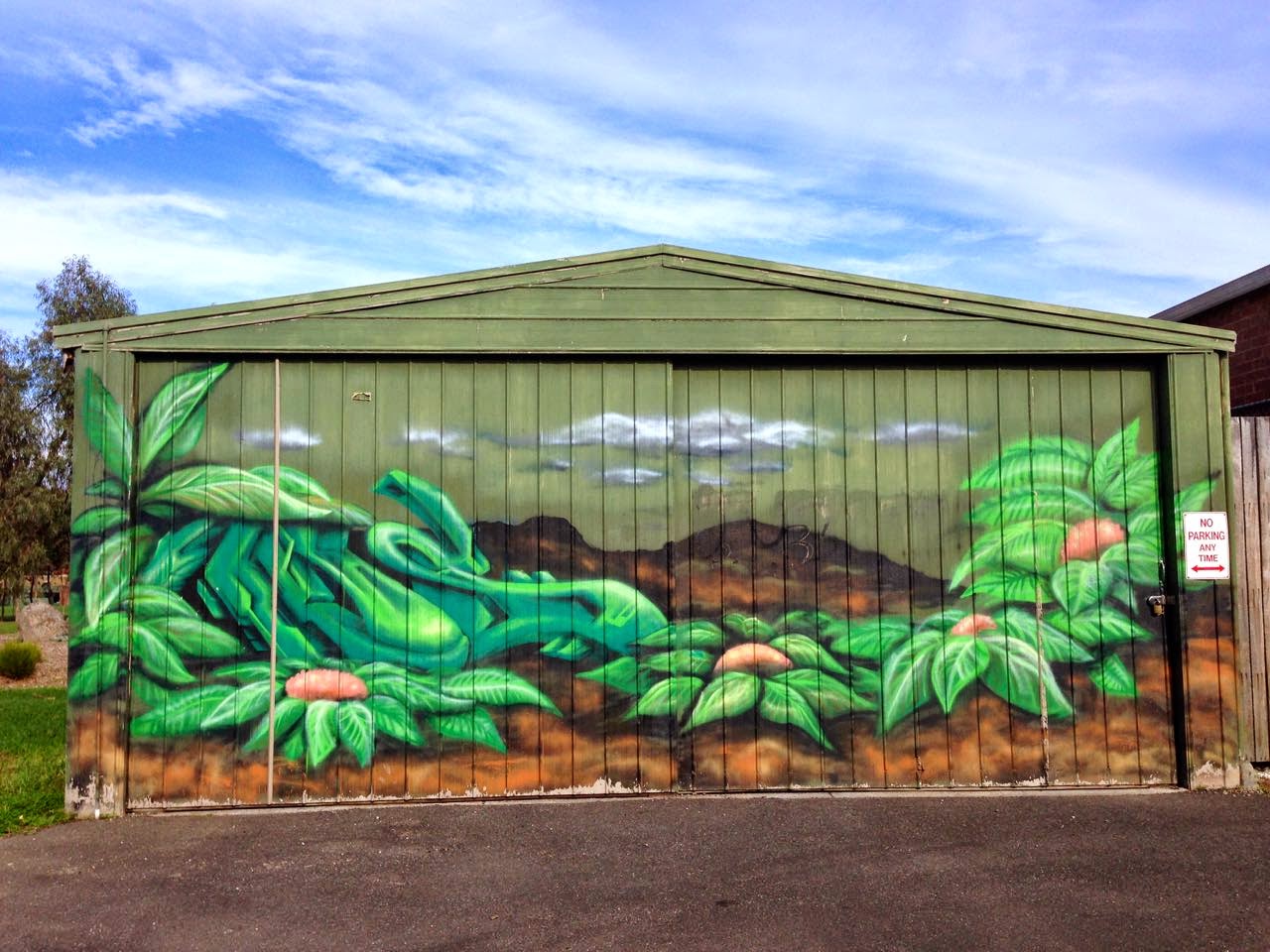 This shed is at Harmony Park on Gaffney Street.  (For the pedants, it is Coburg North.) 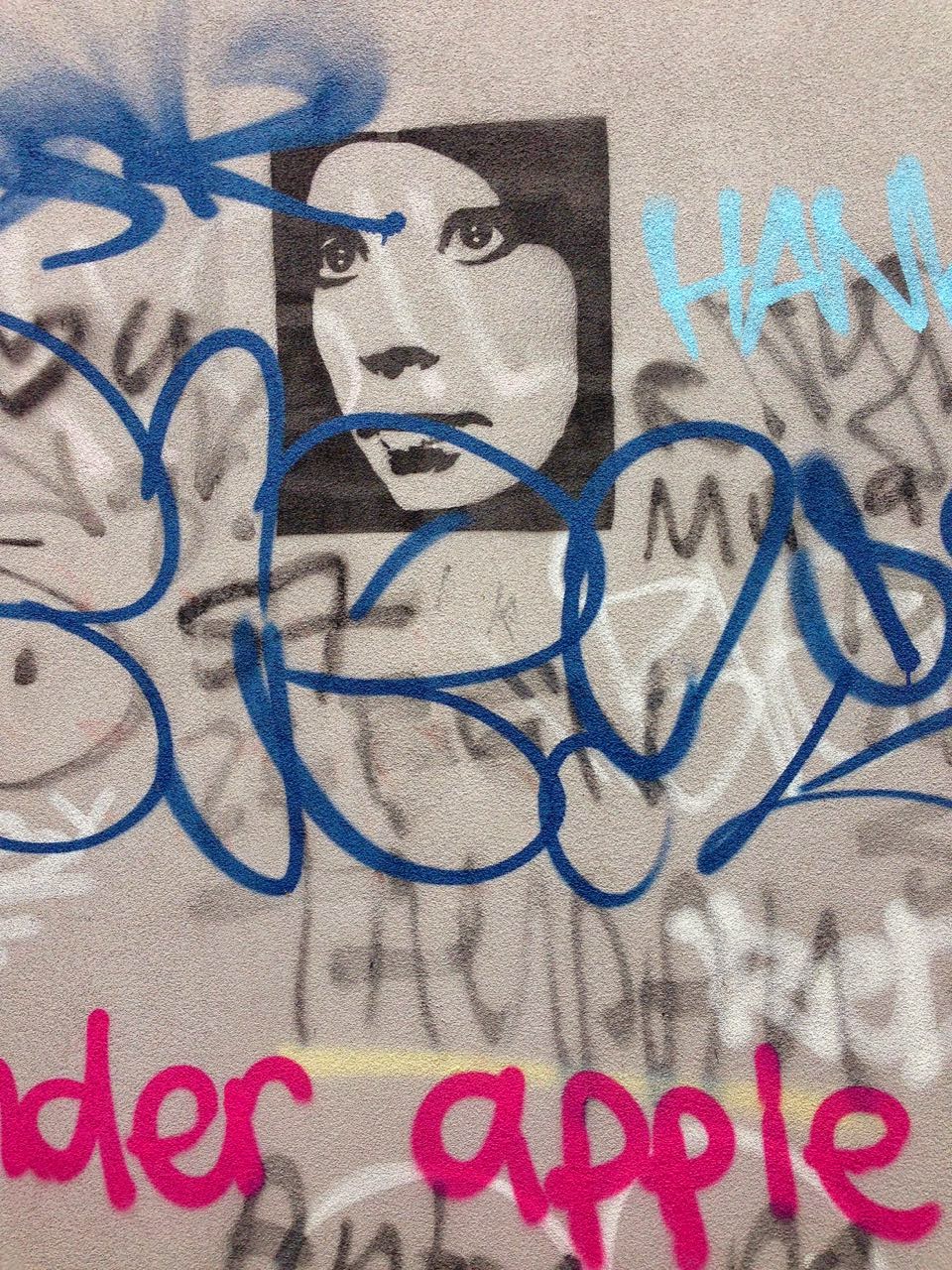 There is even stencil art in Coburg.  Not a lot. 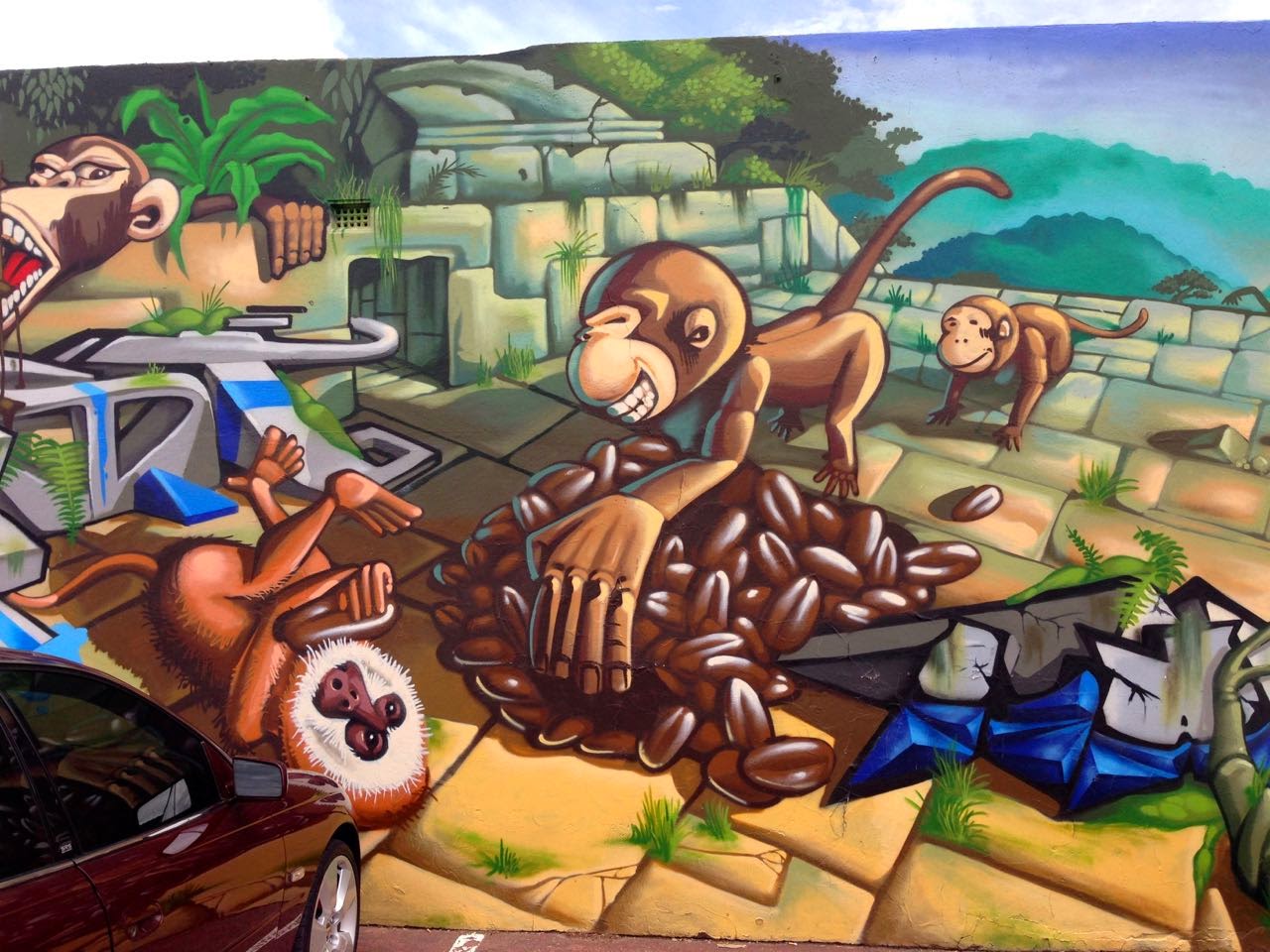 This monkey mural is on a wall at Espresso Joe's drive through coffee shop on Sydney Rd south of Gaffney Street. 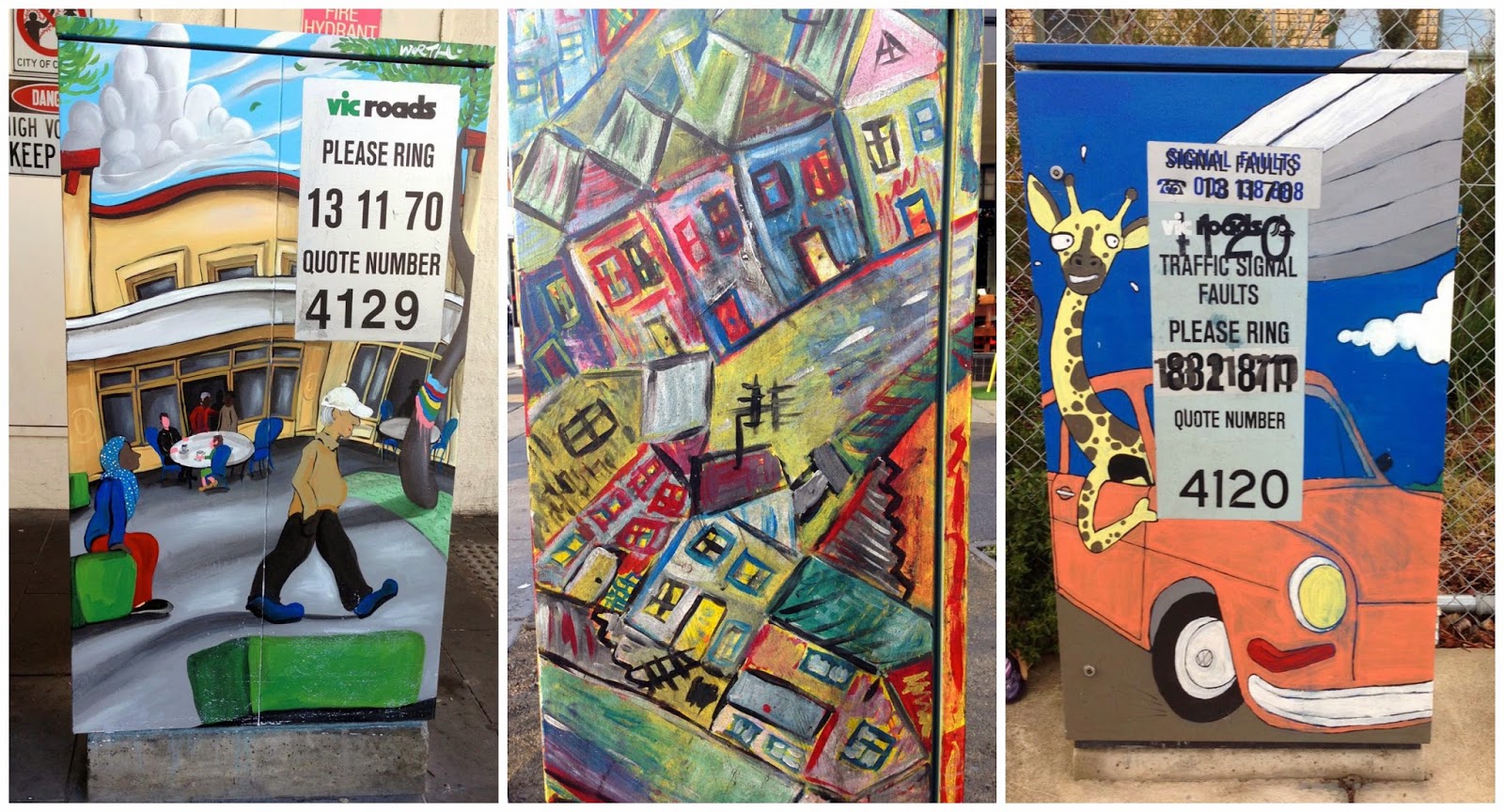 Coburg signal boxes are being painted as part of a VicRoads program.  I particularly love the giraffe in a car outside Coburg North Primary School. 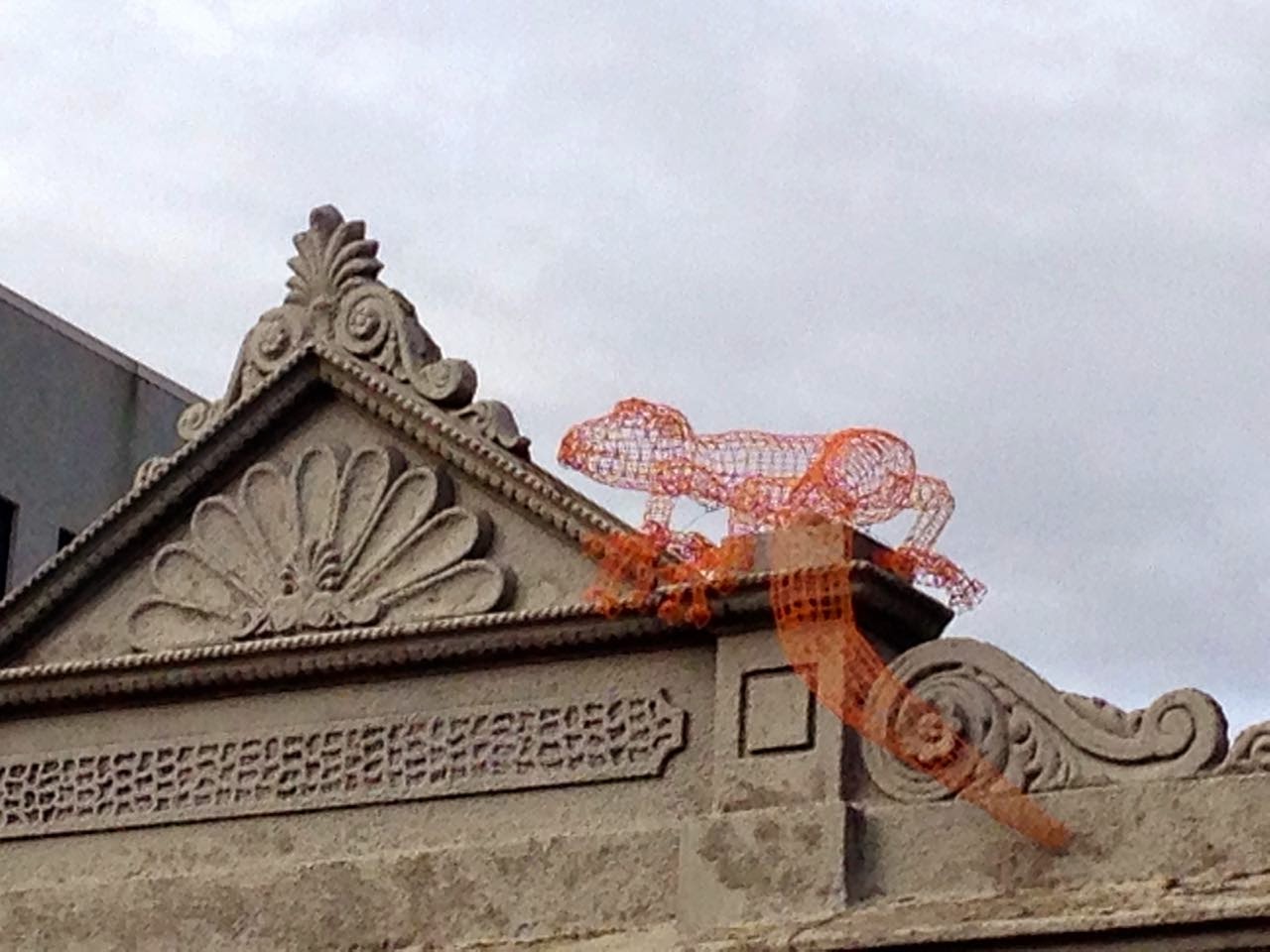 This mesh lizard and a mate have been atop a house in Railway Place, again on the Upfield train line. 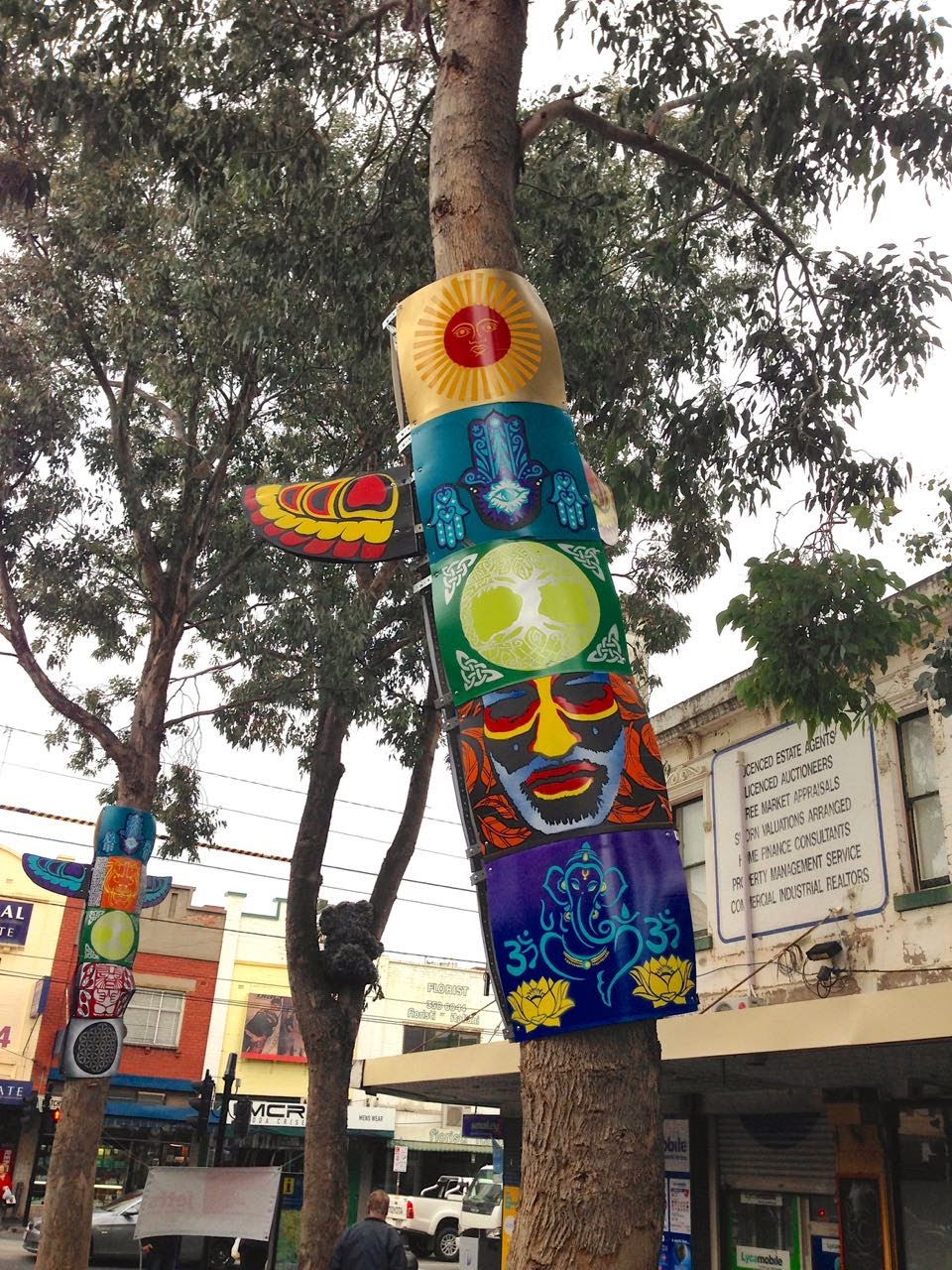 Victoria Street mall has some interesting pieces of street art.  These Pillars of the Community Celebration poles were created by Aaron James McGarry for the Coburg Carnivale this year.  He also made the koalas out of old shopping bags (see the koala in the forked tree in the photo). 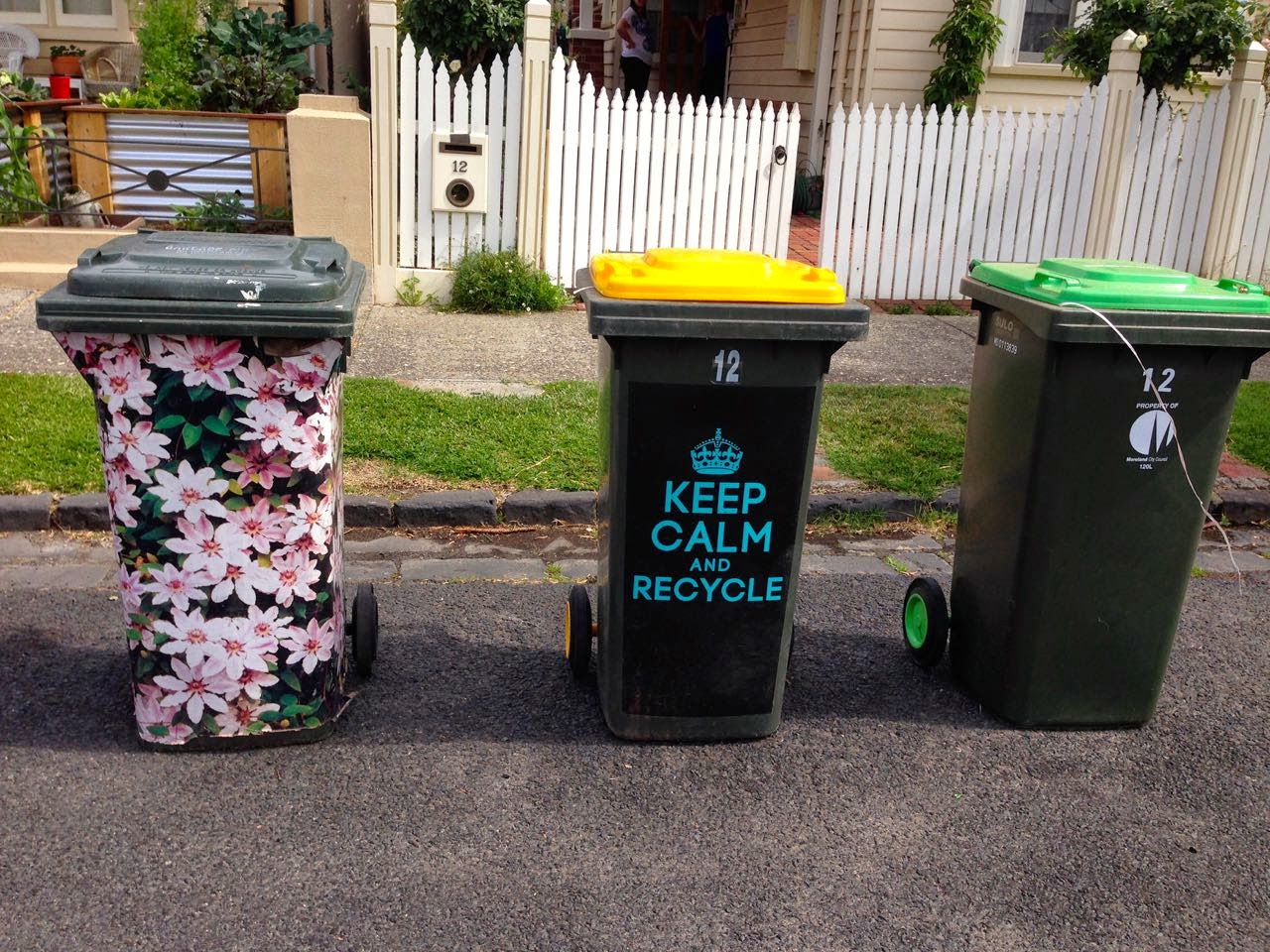 I recently was riding through the streets and saw someone's bins on the road waiting to be emptied.  I really love the floral decoration on the bin and had to snap a photo.  It gives new meaning to trashy art! 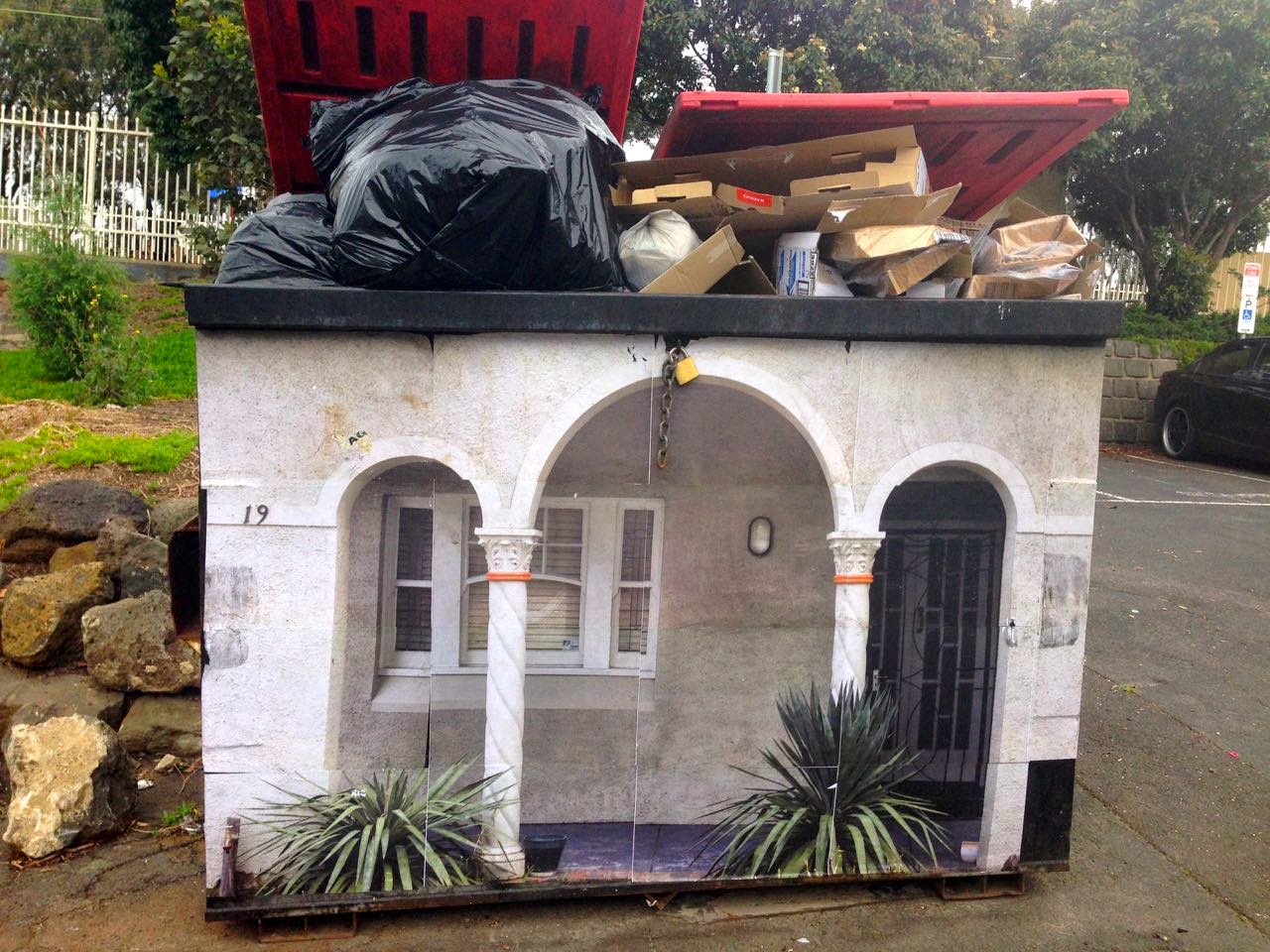 More trashy art.  I really love these house photos that have been stuck on the sides of bins, public toilets and other public architecture.  Then I saw on Facebook that it is part of the MoreArt 2014, the Moreland City Council's public art show. 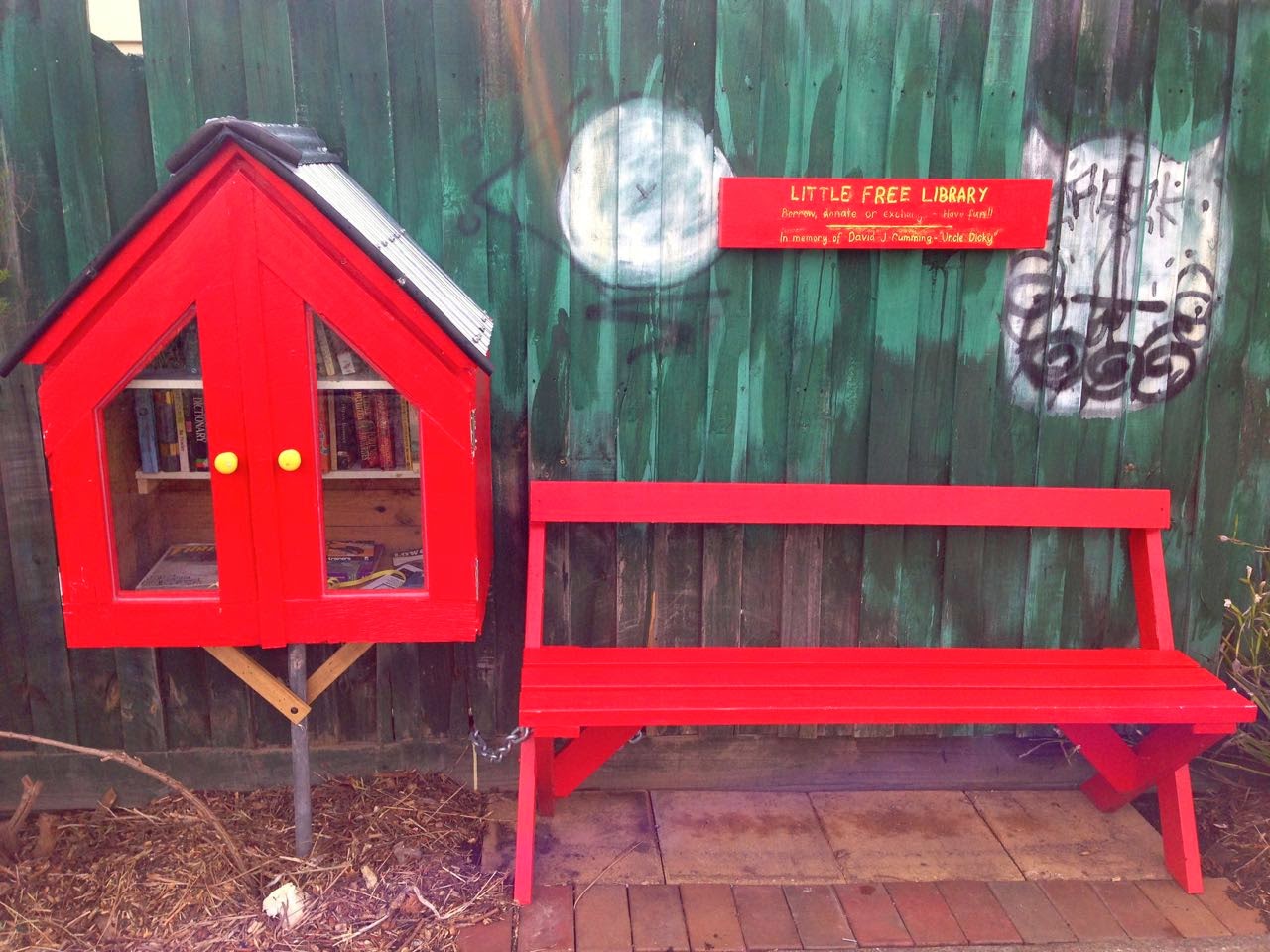 I thought that this Little Free Library that has recently appeared on the Upfield bike track south of Reynard Street might be part of MoreArt 2014 but I can't see it on the list of art works.  It would be a great place to read a book and watch some trains!  (Update 1/12/2014: see Moreland Leader article about it.) 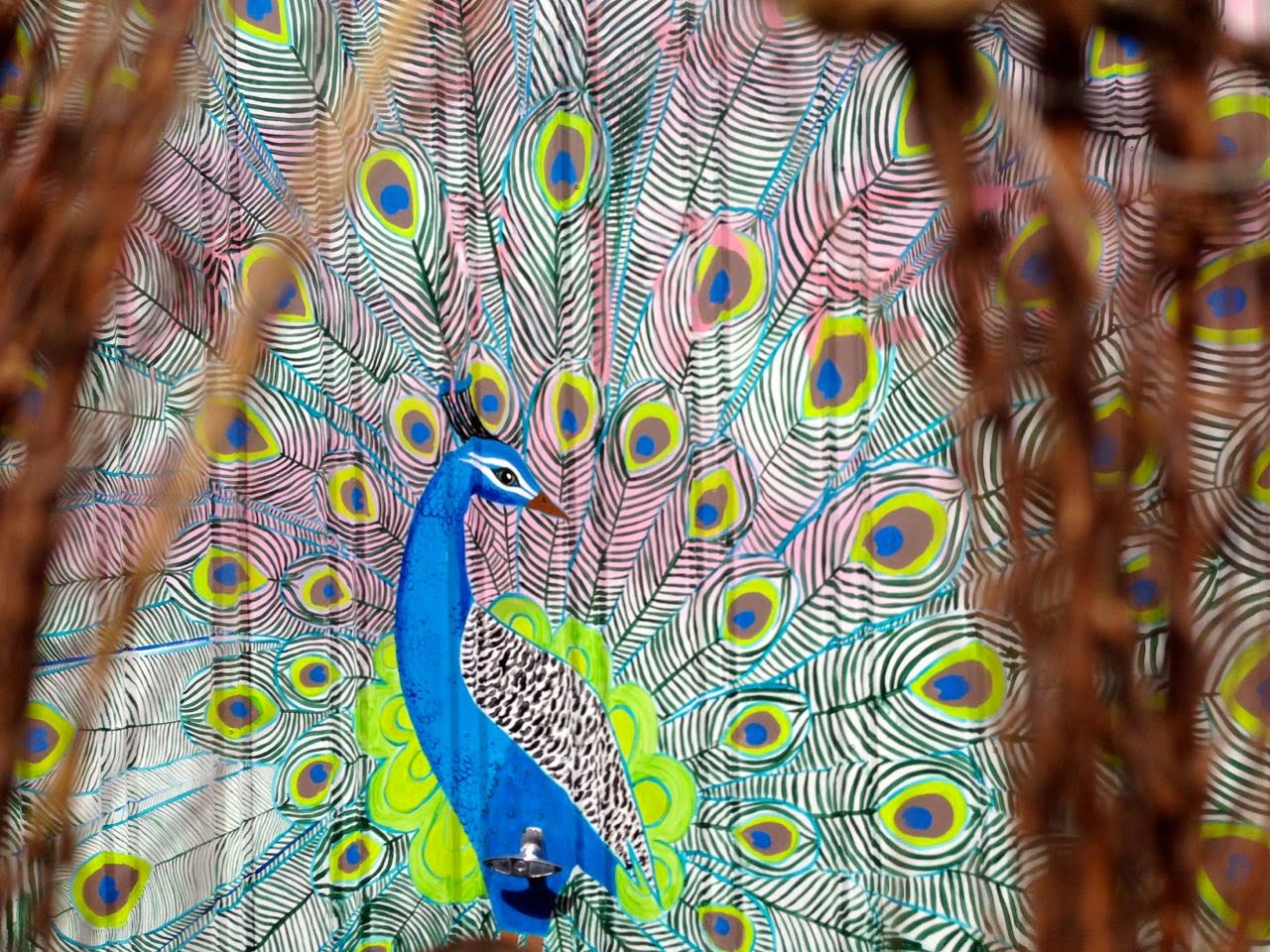 Finally I happened to see this peacock through some brush fence.  It is painted on someone's garage.  (It is signed by Jara Art.)

I hope you will agree with me that there is some really interesting street art around Coburg.  If you are in the area, I recommend you check out the MoreArt 2014 page which has a little map of where you can see participating art pieces until 19 December 2014.  Or just look out the window if you are on the Upfield train.

Update September 2015 - I have written another post on Street Art in Coburg II with more photos!
Posted by Johanna GGG at 11:30