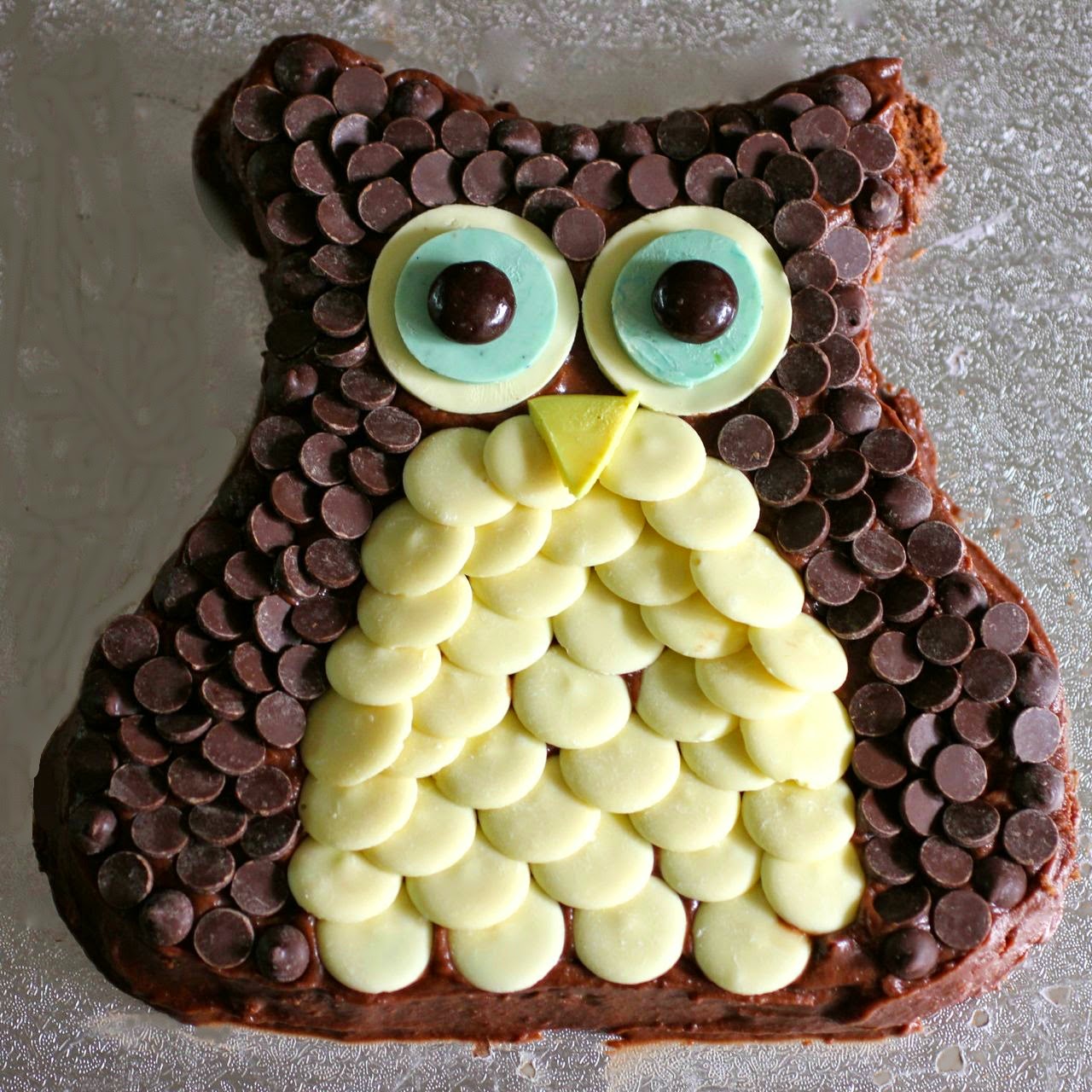 Everything seemed right with this owl cake when my niece Ella entered the kitchen, looked at the cake and smiled with pleasure.  After all she had chosen this cake for her birthday.  Seeing her reaction made light of my misgivings about the sunken cake, the colour of the beak being wrong and the not-quite-right shape.  After all, these cakes are about making kids happy! 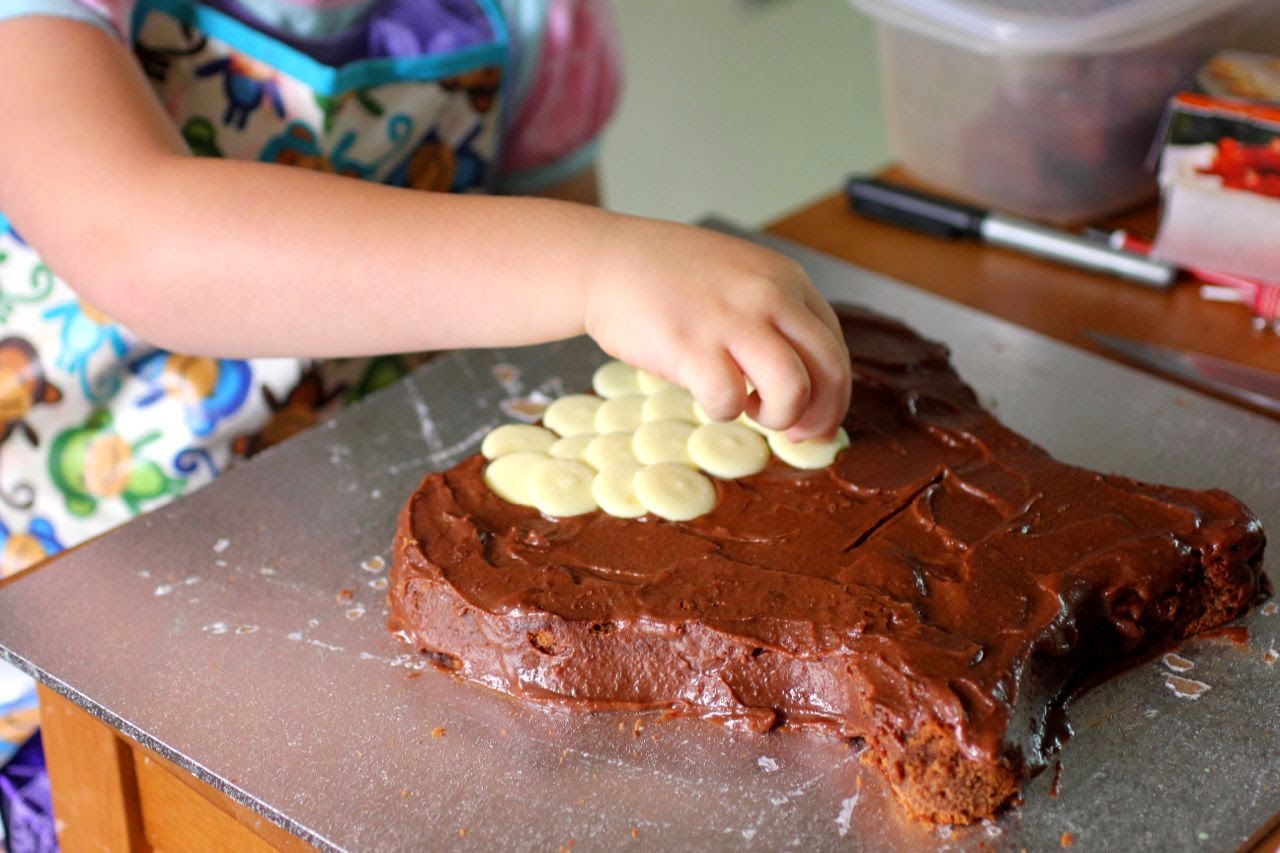 I had looked through my novelty pinterest pins with Ella a week before and we decided on an owl cake.  I chose a favourite gluten free chocolate cake recipe.  After all it was her twin sister's birthday too and Grace is celiac.   The recipe has worked well before but on this occasion it came out of the oven all risen and beautiful.  (I even ate a little cupcake I made with some leftover batter and it was light and airy.)  The next morning the large cake looked flat.  It still tasted good.

The cake was also too square.  Well  it was square when it went in the oven.  When I came to cutting out an owl I wished I had used a lamington tin rather than a square one. It was cute enough but I would have liked a round face. 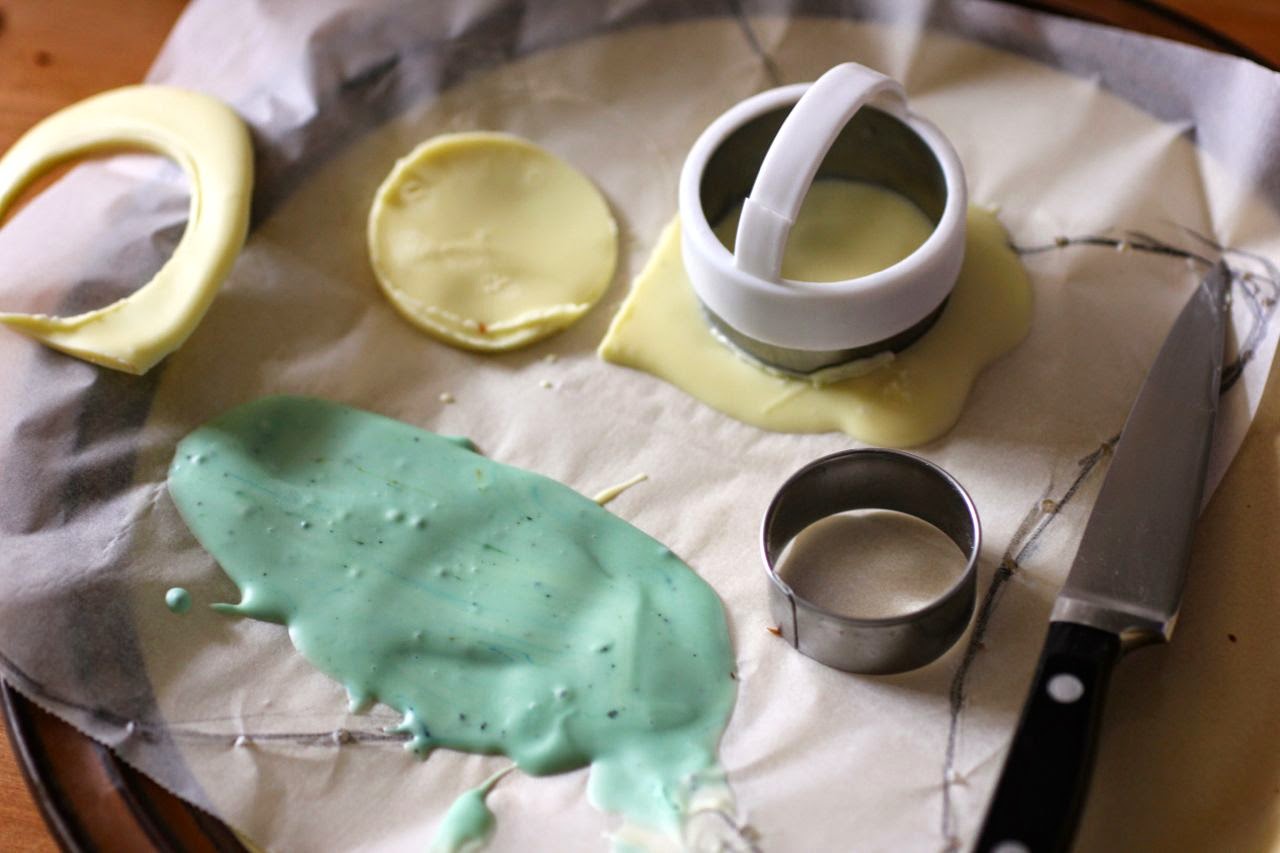 I was pleased Ella chose the owl cake.  It was easy enough to cut, frost and decorate with choc chips.  Easy enough that Sylvia was able to help.  The biggest challenge, other than cutting it from a square (which resulted in a concave rather than round head), was making the eyes and beak.  I decided to dye some white chocolate, smear it on baking paper and cut it out when just firming up.  The colours we made were quite muted but close enough for jazz. 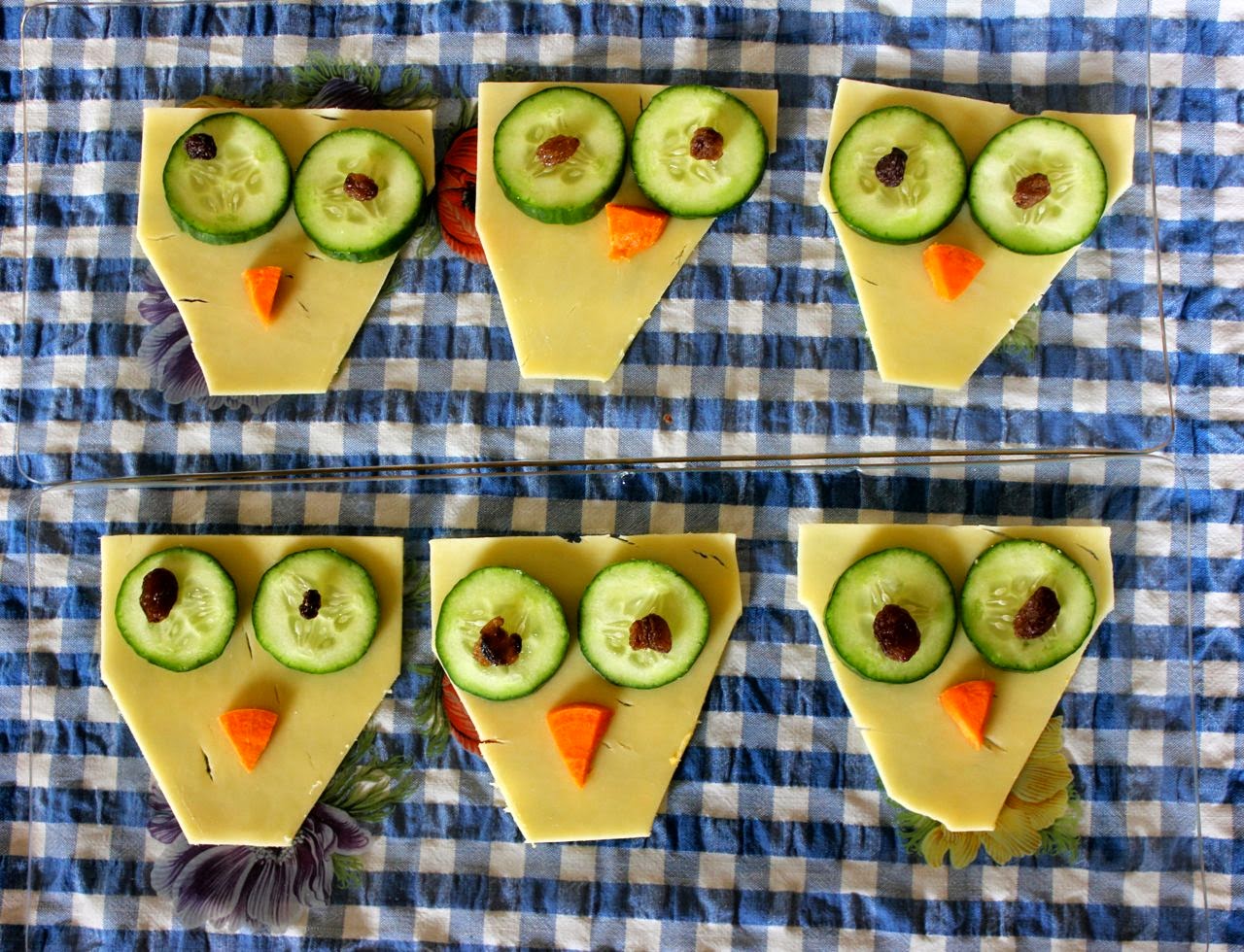 We took the cake to my mum and dad's place in Geelong for the birthday lunch.  Sylvia decided she would join in on the owl theme and make some owl snacks that she had seen on Playschool.  She originally wanted to do it with sandwiches but we decided to use cheese slices so they would be gluten free for Grace.  Sylvia loved instructing her younger cousin Ashy on making the owls.  They looked great though everyone was too full from other food to eat them. 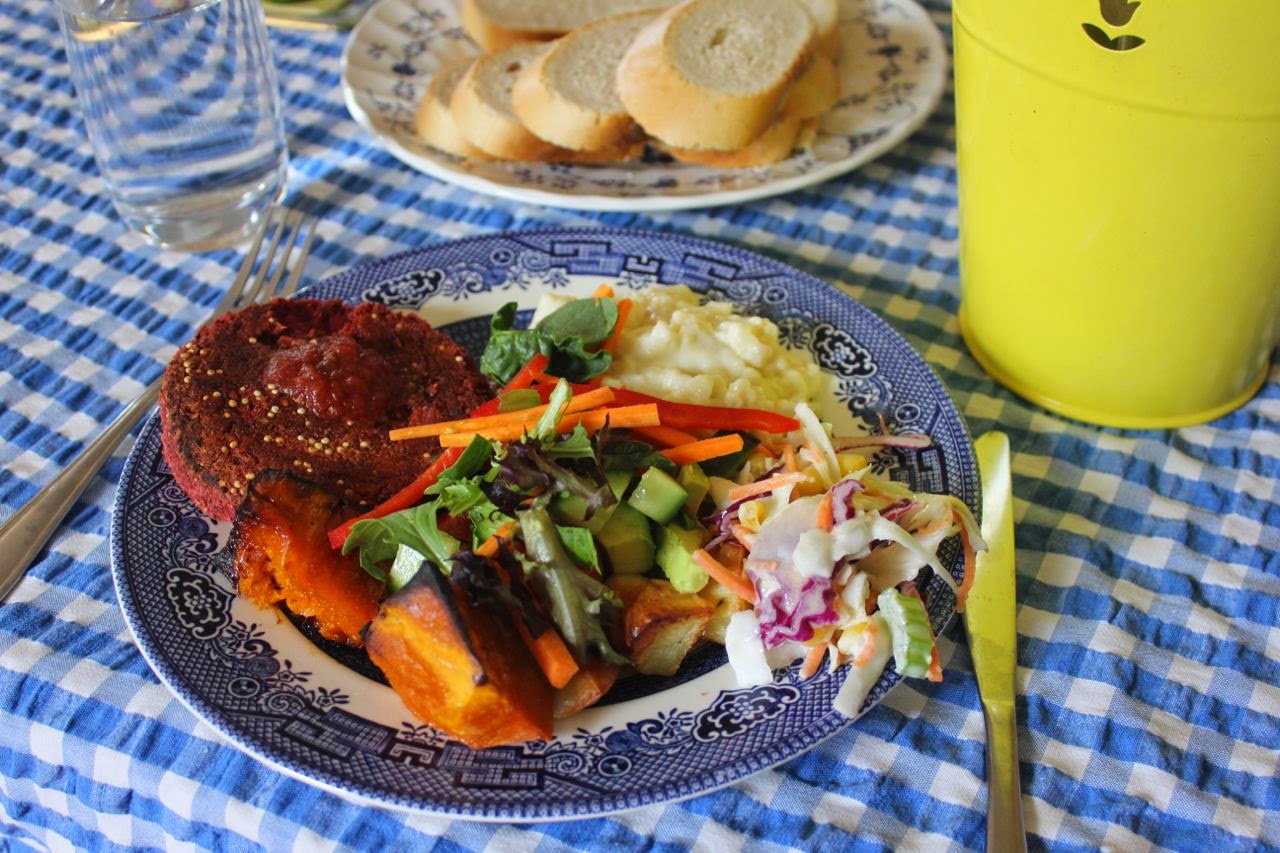 Here is my plate of food.  There was heaps.  I had a beetroot burger, roast potatoes and pumpkin, cauliflower cheese, coleslaw and heaps of salad. 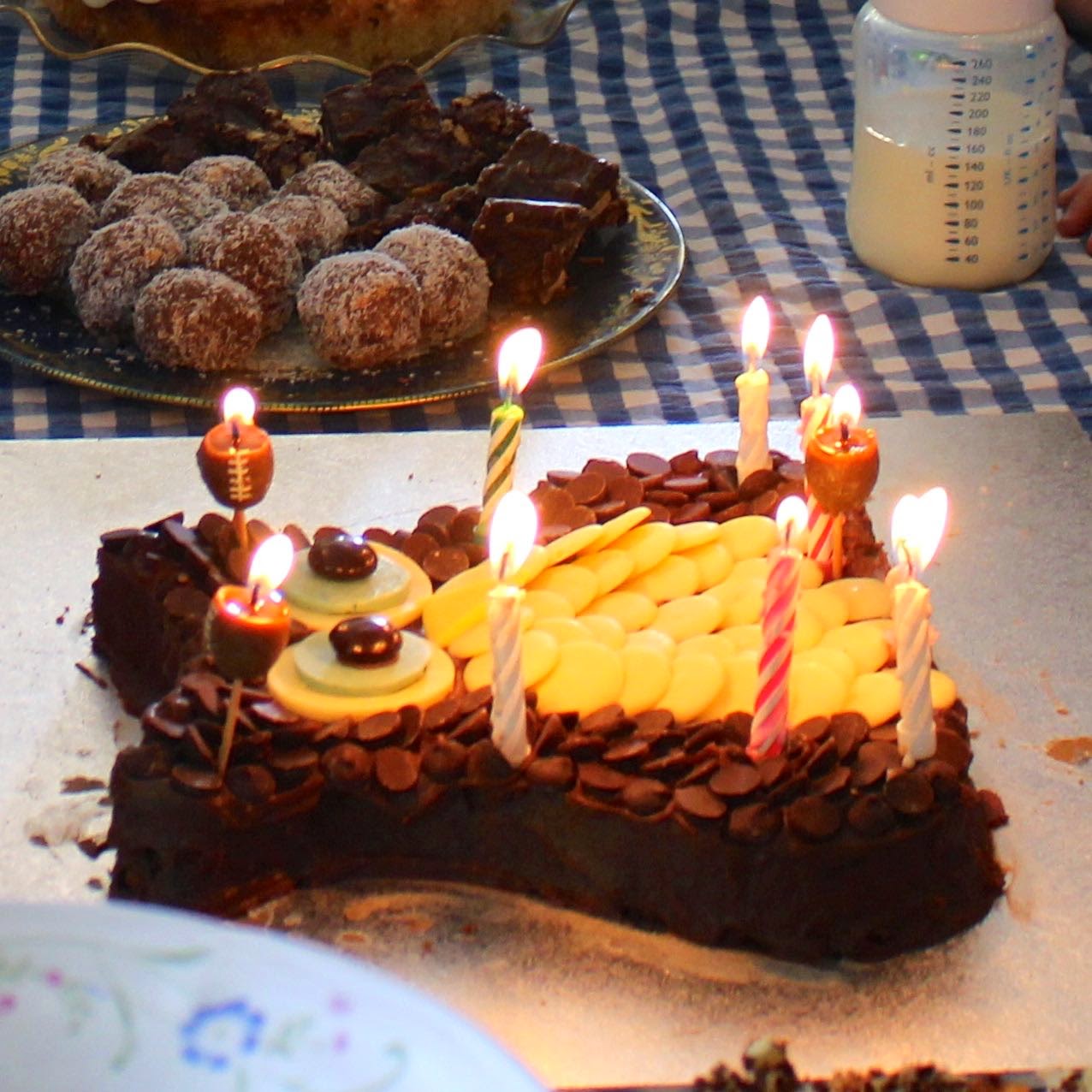 And here is the little owl with candles.  It looks like owl acupuncture.  And what a stoic look this little bird has despite all the pins and flames.  Over and over.  We sung happy birthday to Ella and then to Grace and then all the kids had a go at blowing out the candles. 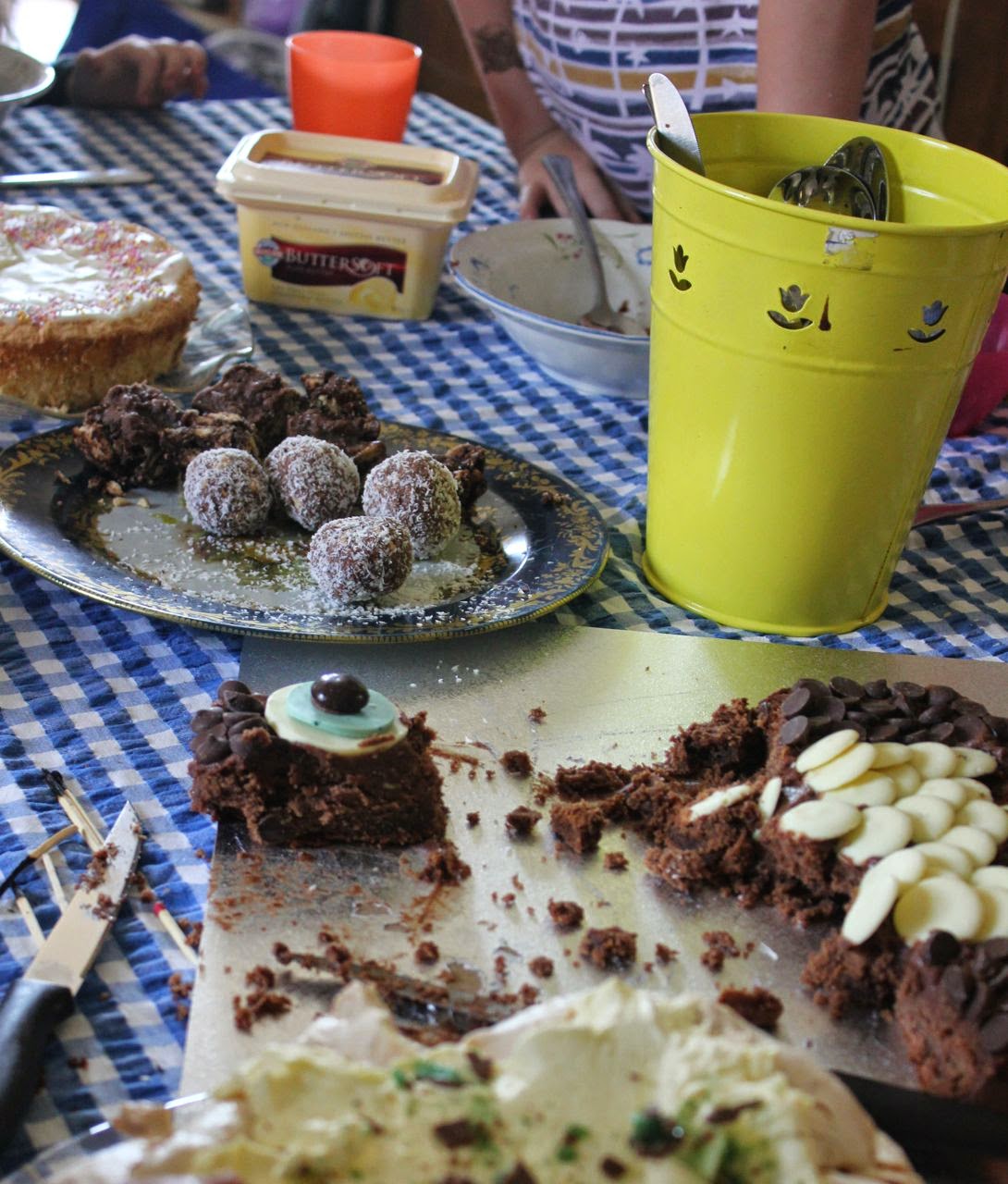 Finally here is a lone eye - like a halloween remnant - after many slices were passed around the table.  Everyone loved the cake.  I suspect the generous helping of choc chips on top were the secret of its success.  By the time we had all eaten sponge cake, grubs, hedgehog, and pav, everyone was as full as a state school.  Best of all, was having my nieces thanking me for the cake as they left.

I am sending this cake to
- Helen of Fuss Free Flavours for Bookmarked Recipes (coordinated by Jac of Tinned Tomatoes);
- Helen of Casa Costello for Bake of the Week; and
- Jane of the Hedgecombers for Tea Time Treats (co-hosted with Karen of Lavender and Lovage) for this month's Bonfire Night (because chocolate cake is warming and owls come out at night). 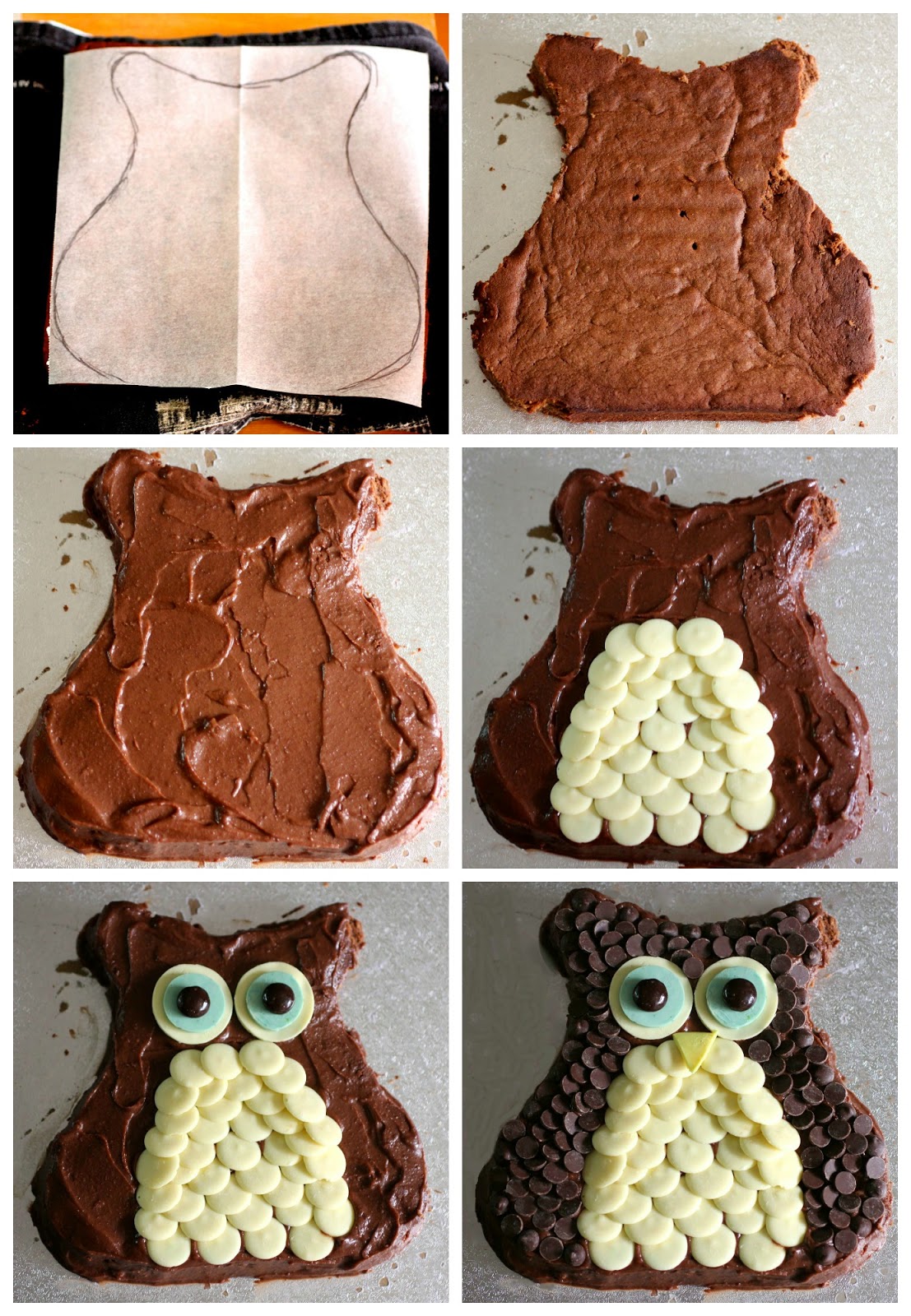 You will need:
Chocolate cake baked in a lamington tin (I used this cake)
Baking paper and pencil
*Chocolate frosting (I used this one)
White choc chips (I used melts)
Black choc chips
Blue and yellow food colouring
Dark brown round lollies (I used junior mints)

[*My frosting had to be made first and then left to cool and thicken.]

Make owl template:
Cut out piece of baking paper the size of the cake.  Fold in half and draw outline of half an owl (I would do the ear tufts on the side of the ears and then a smaller circle at the top for the head and a larger circle at the bottom for the body but the square didn't get much room for shaping - hence next time I would use a rectangle shape of the lamington tin).  Turn over and trace the half shape to create a whole owl shape.

Cut cake into owl shape:
Place paper over cake (on a chopping board) and use skewer or other sharp objects to make marks on cake of the shape of the owl.  Use a sharp knife to cut out the owl shape.  Use a pastry brush or silicone brush to remove any crumbs.  Transfer cake onto cake board or plate.

Frost and decorate cake:
Spread chocolate frosting over the cake.  Clean any frosting from board or plate with a cloth.  Place white circle on frosting for eyes.  Use a small dab of frosting to attach the blue circles on the white circles.  Then use a small dab of frosting to place lollies in the middle of the blue circle.  Now place white choc chips overlapping so that they form a half circle breast of the bird that goes just a little below the eyes.  Place yellow triangle between eyes as beak.  Arrange dark choc chips overlapping around the rest of the body and head of the owl.

On the Stereo:
Costello Music: The Fratellis
Posted by Johanna GGG at 13:23