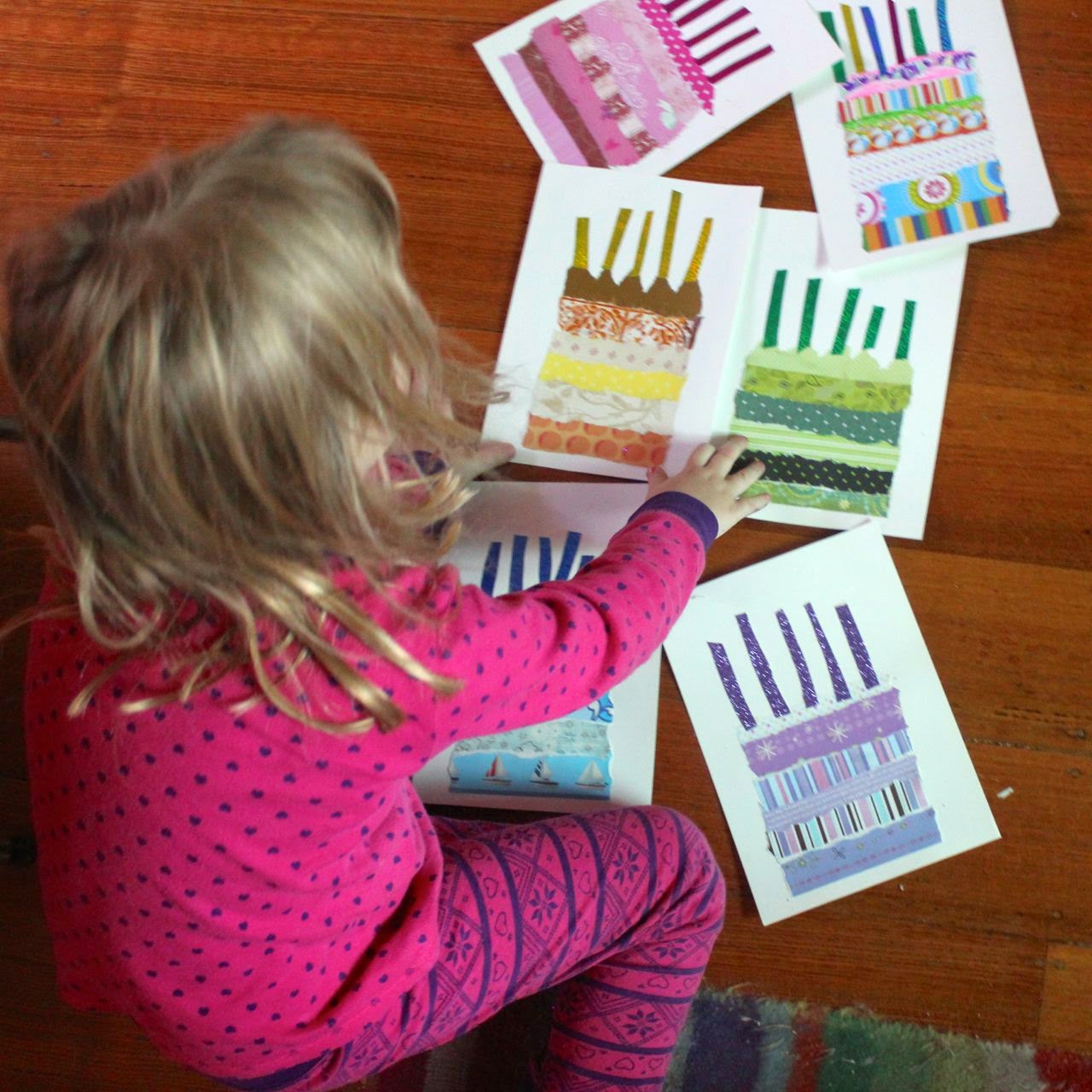 Entertaining always leaves leftovers in my fridge.  I had bought more cheese than necessary for our recent birthday lunch.  It went into a delicious cheese spread that saw us through a long weekend.  Sylvia had a holiday on Monday as well as the Melbourne Cup public holiday on Tuesday.  So here is an overview of the weekend interspersed by craft, the zoo and the cinema.  Oh and I have some random reflections to share as well. 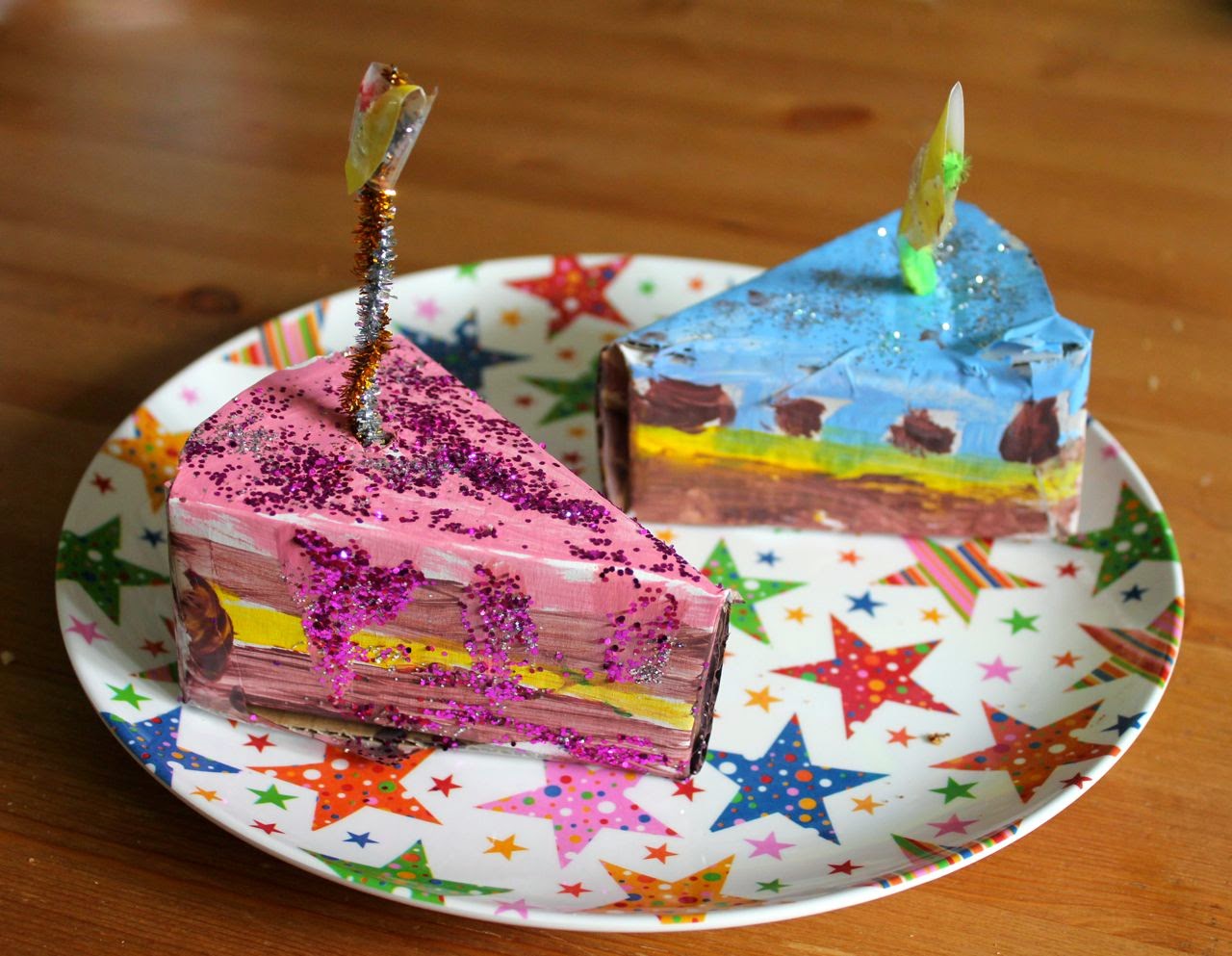 I have already told you about the birthday lunch on Saturday.  On Sunday we had a quiet day at home. It seemed an excellent opportunity for some craft.  Sylvia got out her craft tablecloth and craft box.  She was keen.  We also got out the paints and she set about painting some pictures while I cut out some cake shapes for her to paint.  (Template from here.) 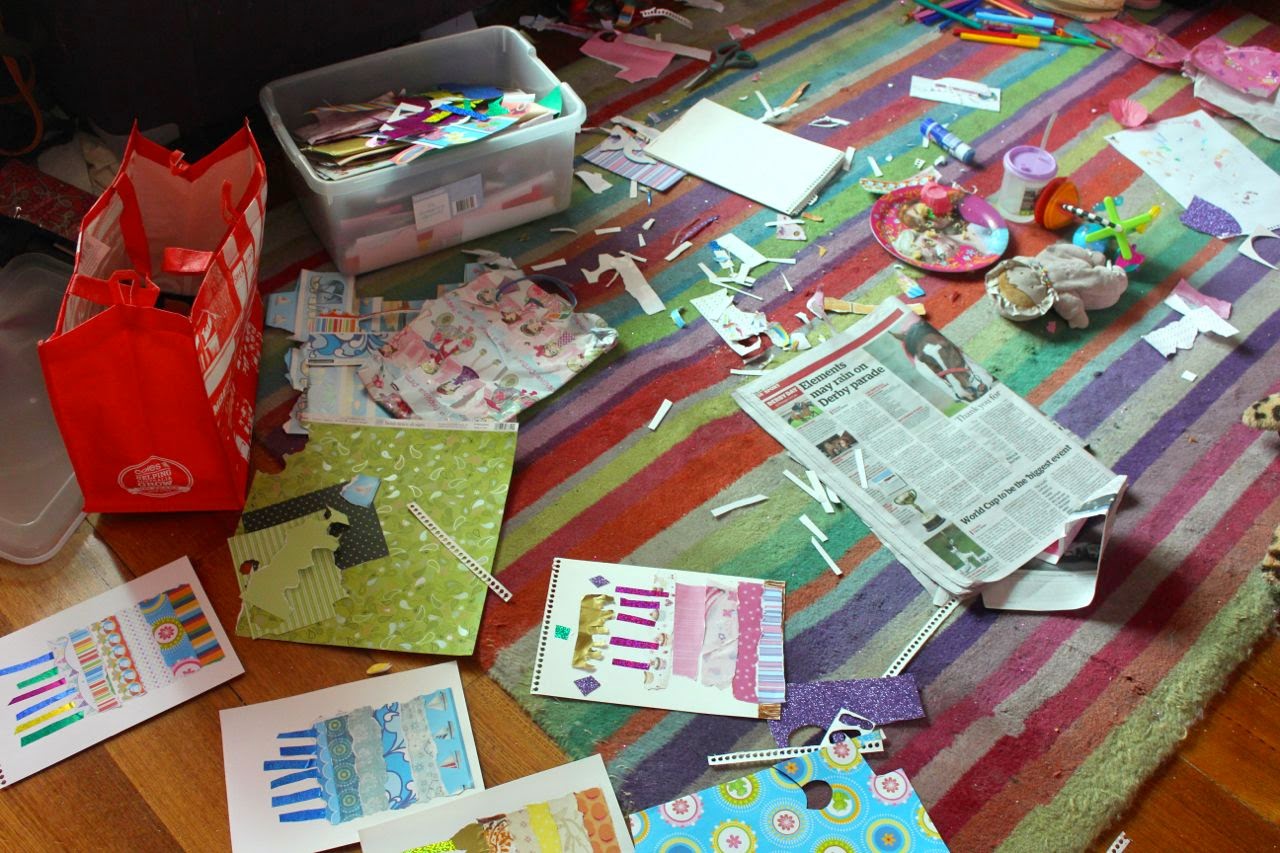 Meanwhile I started some birthday cake collages I had been keen to try. The idea is to rip layers of cakes from craft papers.  We have a ridiculous amount of patterned papers and this was a fun way to use them.  Though it did leave the loungeroom in a mess. 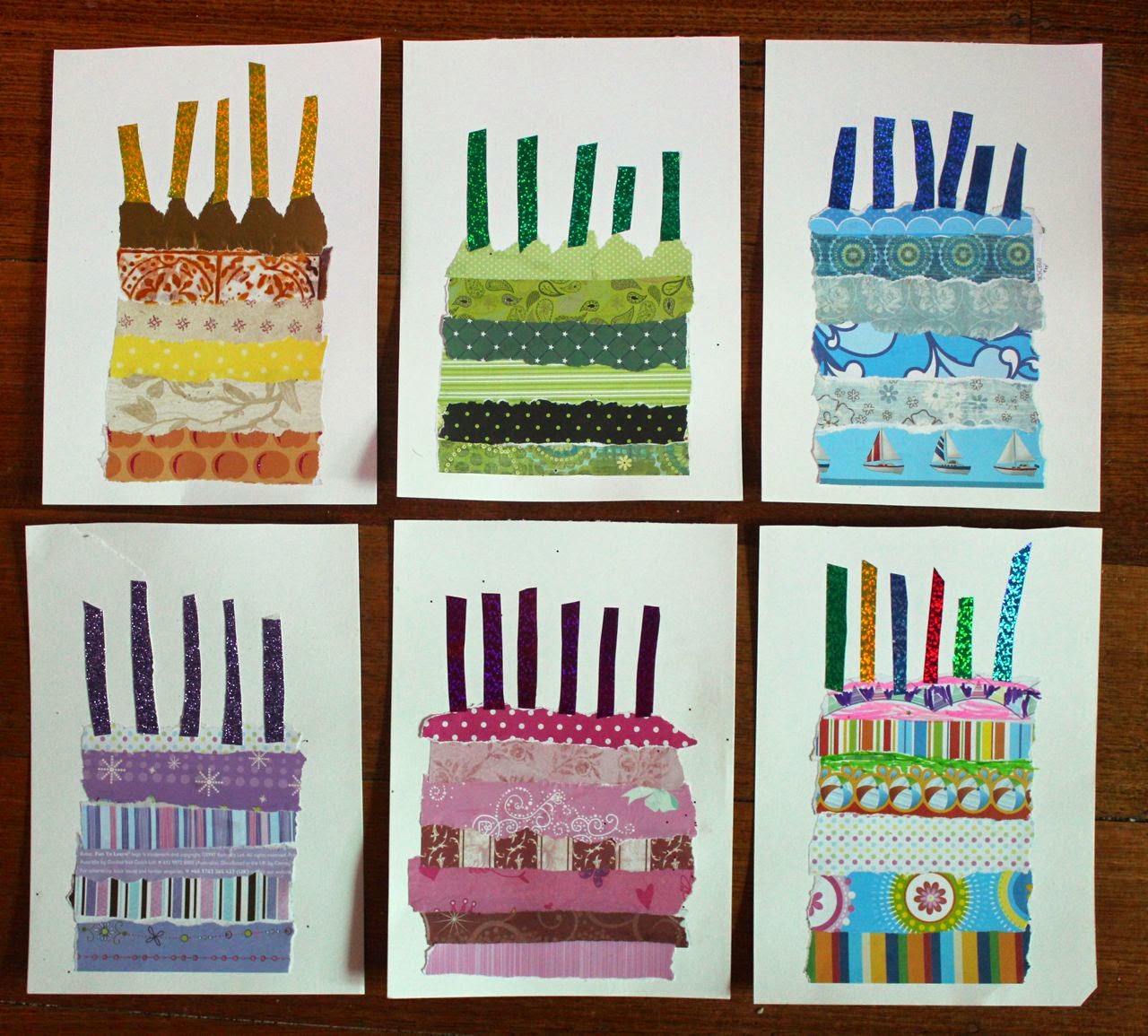 Meanwhile we needed lunch.  I had ambitiously planned to make cheese balls for the cracker spiders the previous day and had bought some nice cheese that never got used.  So I mixed it with leftover cream cheese and seasoning.  It was delicious, albeit quite rich.  It wasn't that easy to spread.  Perhaps a bit of butter would help that so I have added it as an optional extra to the recipe below.  It would be very good in a ball rolled in crushed walnuts for entertaining. 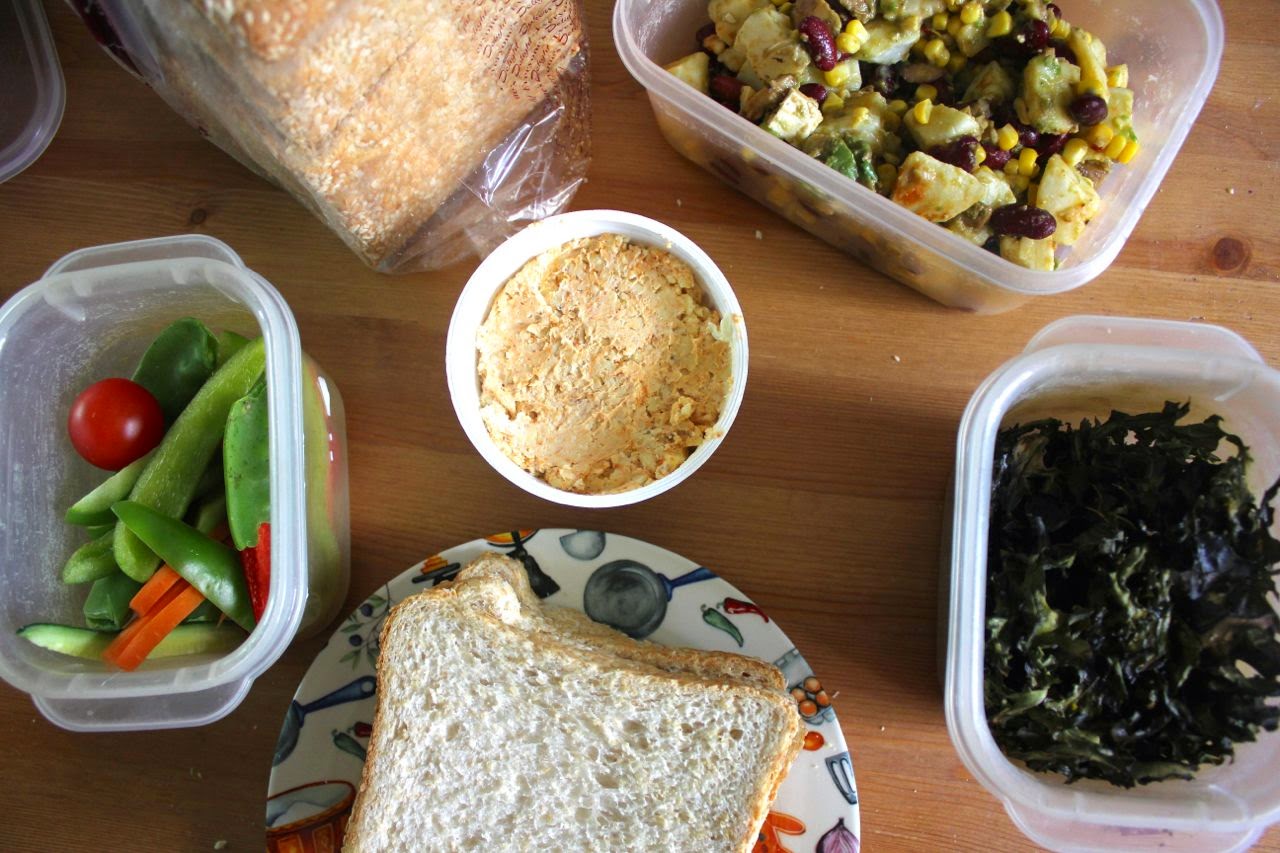 For lunch I made sandwiches with smoky potato salad, vegie sticks and kale chips.  (The leftover kale chips were great and I loved having some ready chopped vegies!)  It was so good.  Afterwards I had to finish the collages.  Sylvia had done with her paints so she helped me and even made some of her own. 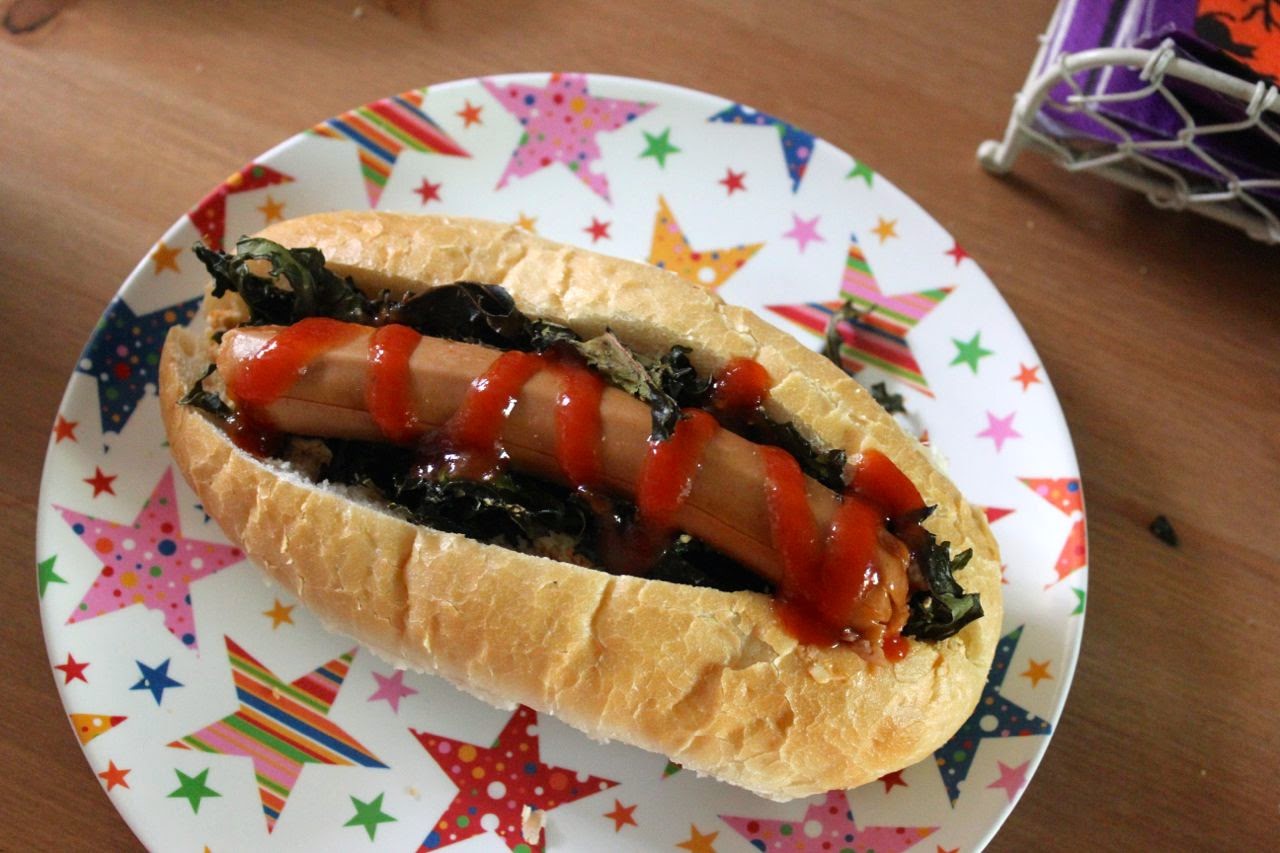 For dinner that night we had hotdogs.  I have had Fry's hotdogs in the fridge for far to long.  Actually they were 2 months past the best by date.  Oops.  I wasn't overly keen on the hotdogs but I have never found a vegetarian hotdog that I like.  When I was young my mum would make hotdogs on weekends occasionally.  I have never found hotdogs that have the red colour and the crunch of the skin that characterised the hotdogs I knew.  These ones were good served with some cheese spread, kale chips and tomato sauce in the hotdog buns. 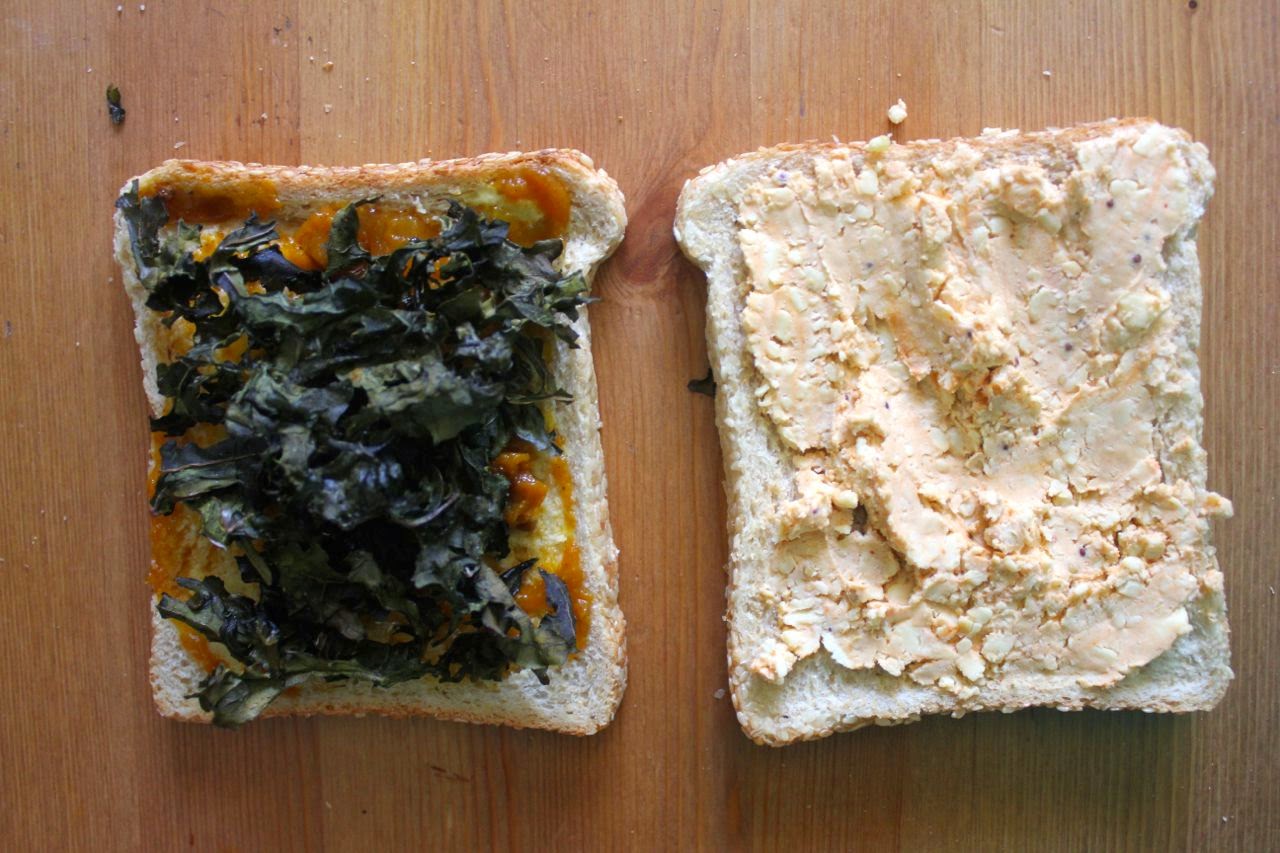 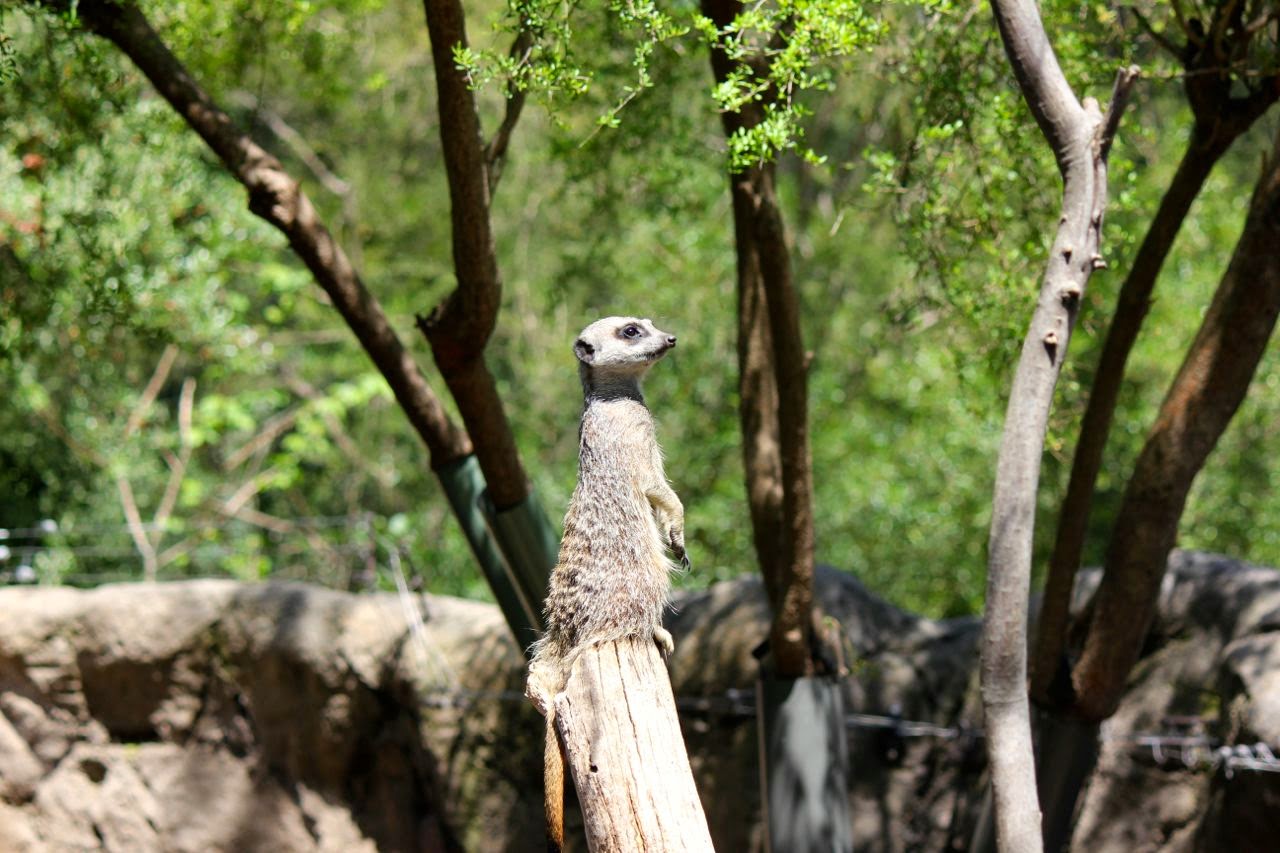 We go to the zoo frequently enough that I just hone in on favourite animals these days.  The meerkats are always entertaining.  Not only are they so cute to watch but I really like the sense of community.  The little meerkat here is on the lookout on behalf of his buddies.  We went to see the seals who were a unusually inactive. 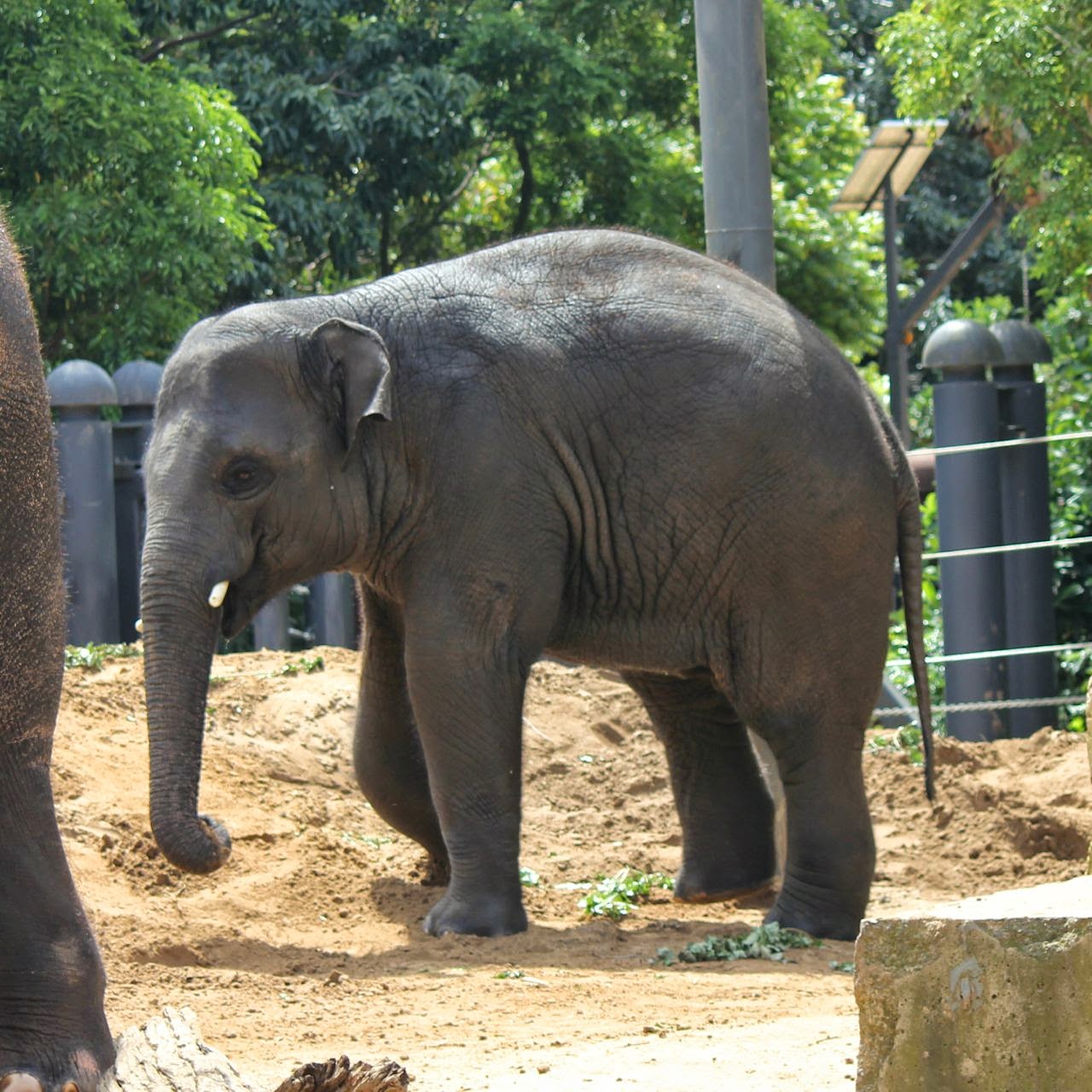 I had promised Sylvia an ice cream so we sat to enjoy it.  When we walked back past the elephants, they were out of the water and walking about.  It was quite amusing seeing one recalcitrant elephant refusing to come for its hay.  The little baby elephant (above) was very sweet. 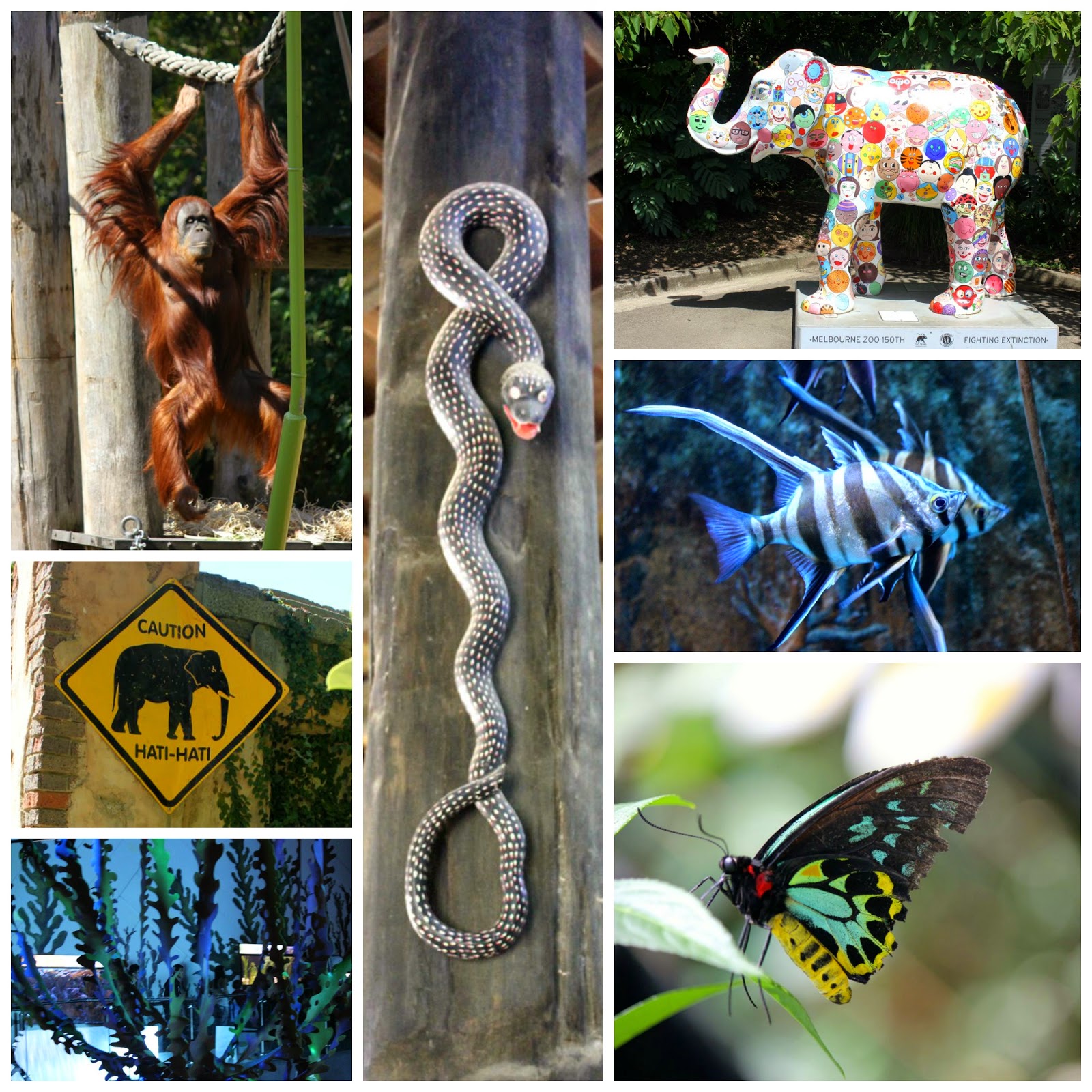 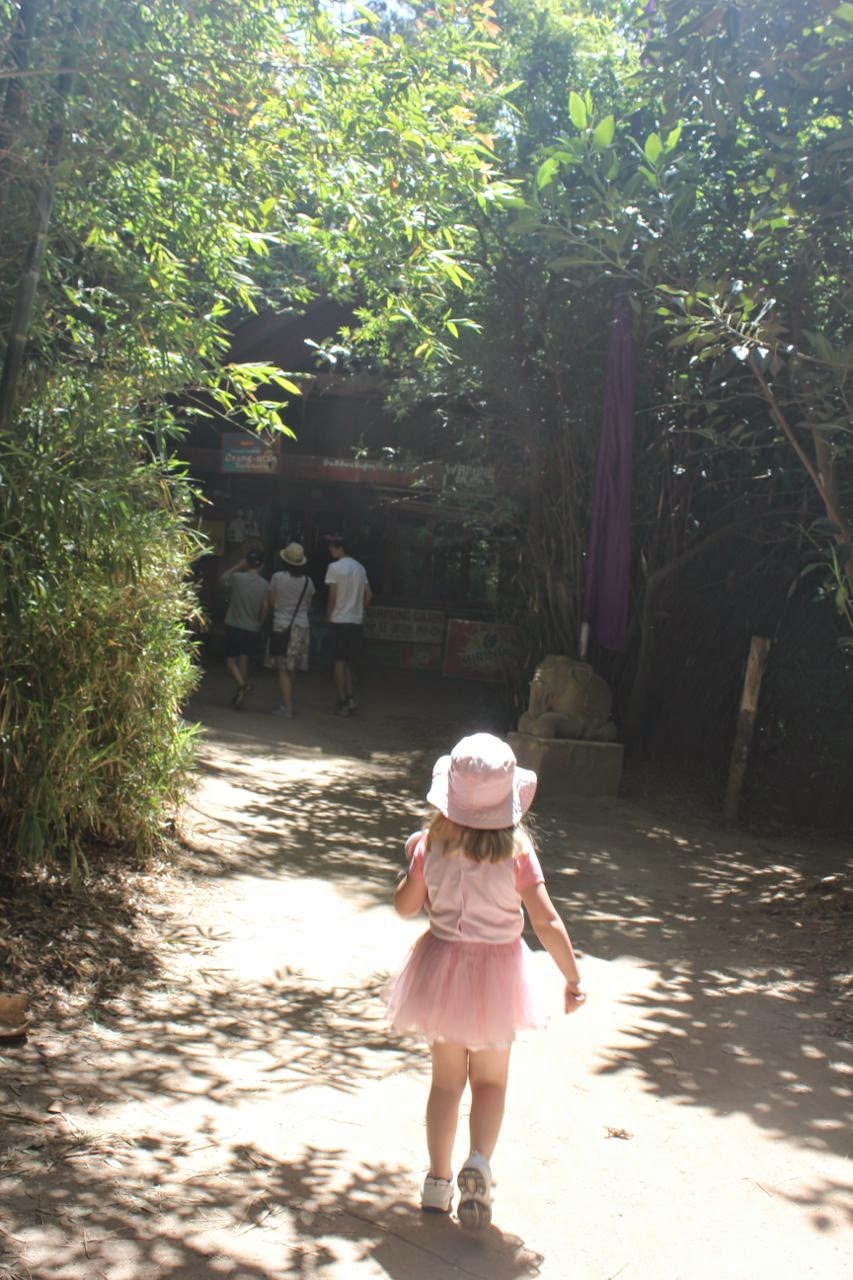 As we were ready to leave we walked past the giraffes only to find they had gone to bed.  I was most displeased.  Sylvia was very pleased to buy a bag that came with colouring in pens to colour in the picture on the side of it.  The next day we went to see the House of Magic at the cinema.  It was a movie that was at times cute, spooky and heartwarming.  I liked it, only not as much as I thought I should.

Finally I wanted to reflect on Facebook.  This week I have reached 100 Likes on my blog page.  Thank you to those of you who have liked the page.  It feels good.  Though I read that it is estimated that my posts will only reach about 6% of the people who Like my page.  Wow!  I Since starting my FB blog page in August, I have found it has been another way to engage with readers but also another drain on my limited time for my blog.  However I have found it useful for following other blogs.  There are some blogs that don't show up in my blog list on the side bar that I use instead of a feed reader.  I have been able to keep up with these blogs through FB.  This has helped demonstrate the value of a FB blog page.

In a related note, recently I stumbled across a FB post where someone had shared the apple slice recipe on my blog.  It has been shared a gobsmacking 75,000 times.  (As well as lots of shares on Pinterest and gawks on FoodGawker.)  I had noticed the spike in my blog stats but it was impossible to see where it was coming from in Facebook until a friend tagged me.  I still get frustrated with the exclusive nature of Facebook.  Yet I also find it a useful way to share information and links.

Mix all ingredients and serve immediately or keep for up to 24 hours in the fridge.

On the Stereo:
American Industrial Songs: Pete Seeger
Posted by Johanna GGG at 23:00