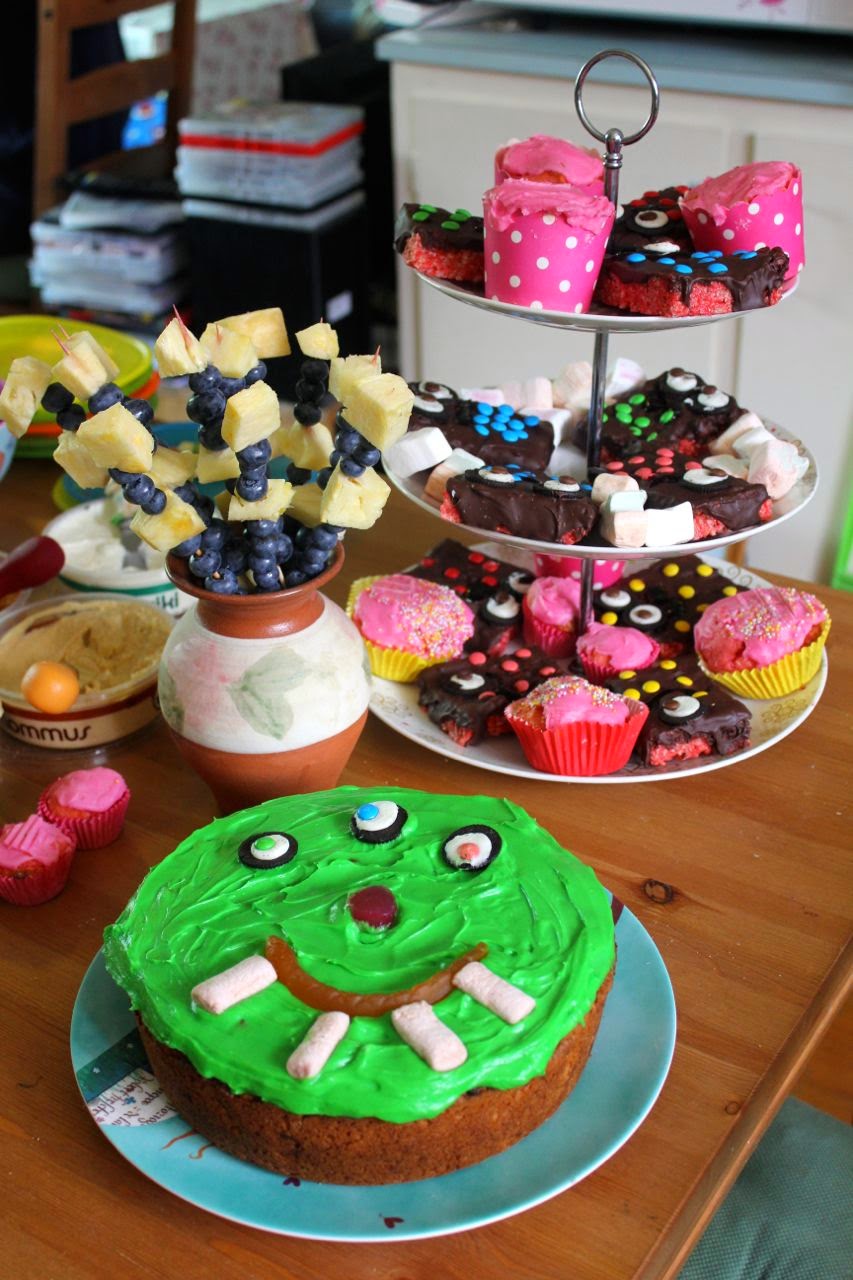 I have written about my discomfort with Halloween and the snacks I made at the birthday lunch for Alex and Ian.  While Halloween does not sit easily with me, I was far more comfortable with making a monster cake and monster rice krispies.  Monsters are as much something that little boys love as they are co-opted for Halloween fun.  Only this year I mistakenly overdid the red food dye and Sylvia and friends looked like something out of a horror movie.  That was fun but not at all recommended! 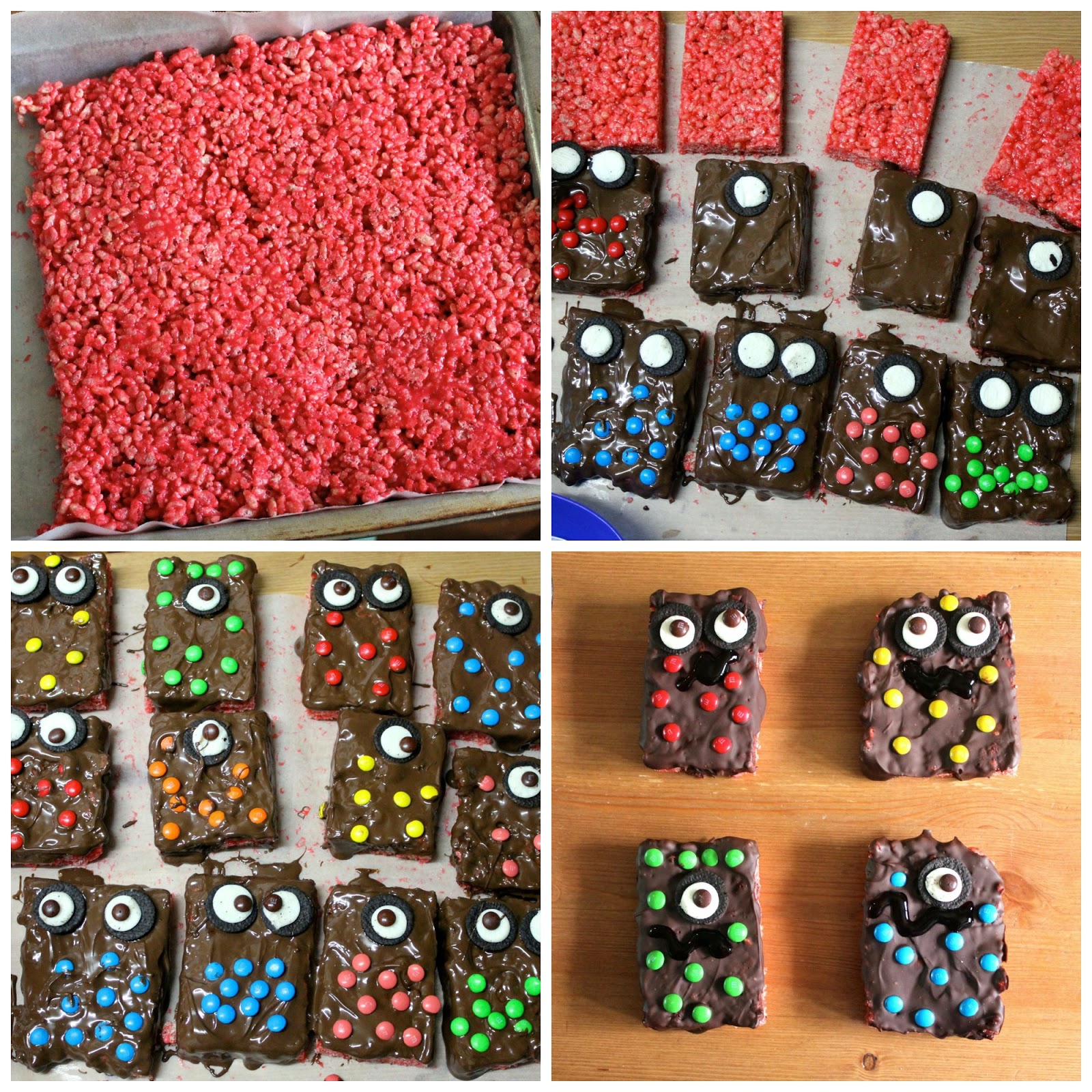 I decided to make rice krispie monsters based on a Pinterest image that took my fancy.  Like Halloween, rice krispie treats were never part of my childhood.  In fact I'd never heard of 'rice krispies' until I started blogging because we say 'rice bubbles' in Australia.  By the time I discovered the recipe I was vegetarian and was only too aware that marshmallows were made with gelatine. 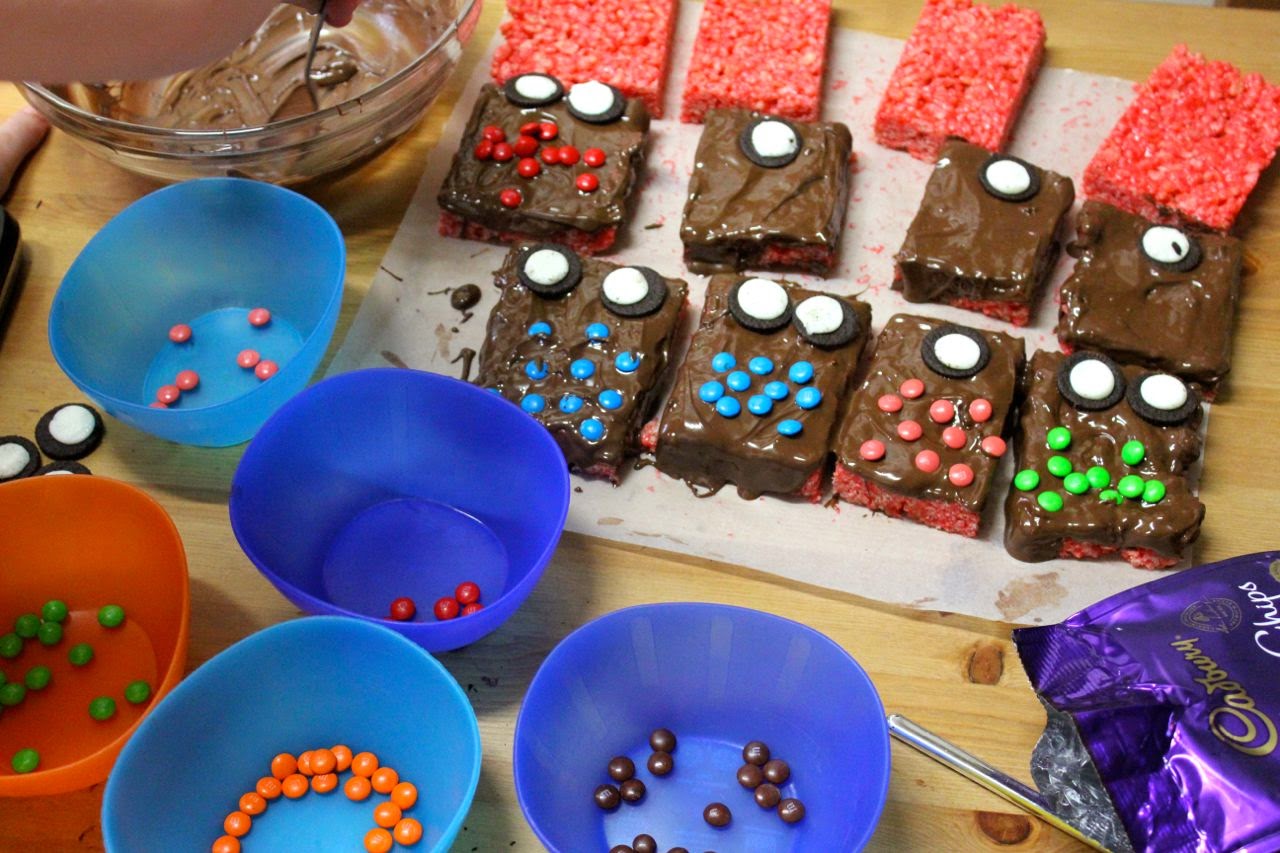 Last year I tried some vegan rice krispie treats with cashew butter and rice malt syrup.  They worked ok.  I tweaked the recipe on the weekend and they were brilliant.  I am sure I loved them twice as much because they had chocolate spread over the top.  I made them with Sylvia the afternoon before the lunch.  They were easy to make but quite messy with spreading chocolate on them.

The photo had little squiggly mouths of icing.  I hate being asked to pipe icing.  It never works for me.  I thought if I bought a little tube of icing that would solve my problems.  Shopping late in the day found me buying what I thought was a tube of icing gel.  When we put it on the rice krispie monsters, Sylvia tasted it and told me it was salty.  I dismissed this and never bothered to taste it.  The gel did seem rather darker than I expected.  But it was on the monsters by then and I put it down to the dark chocolate background. 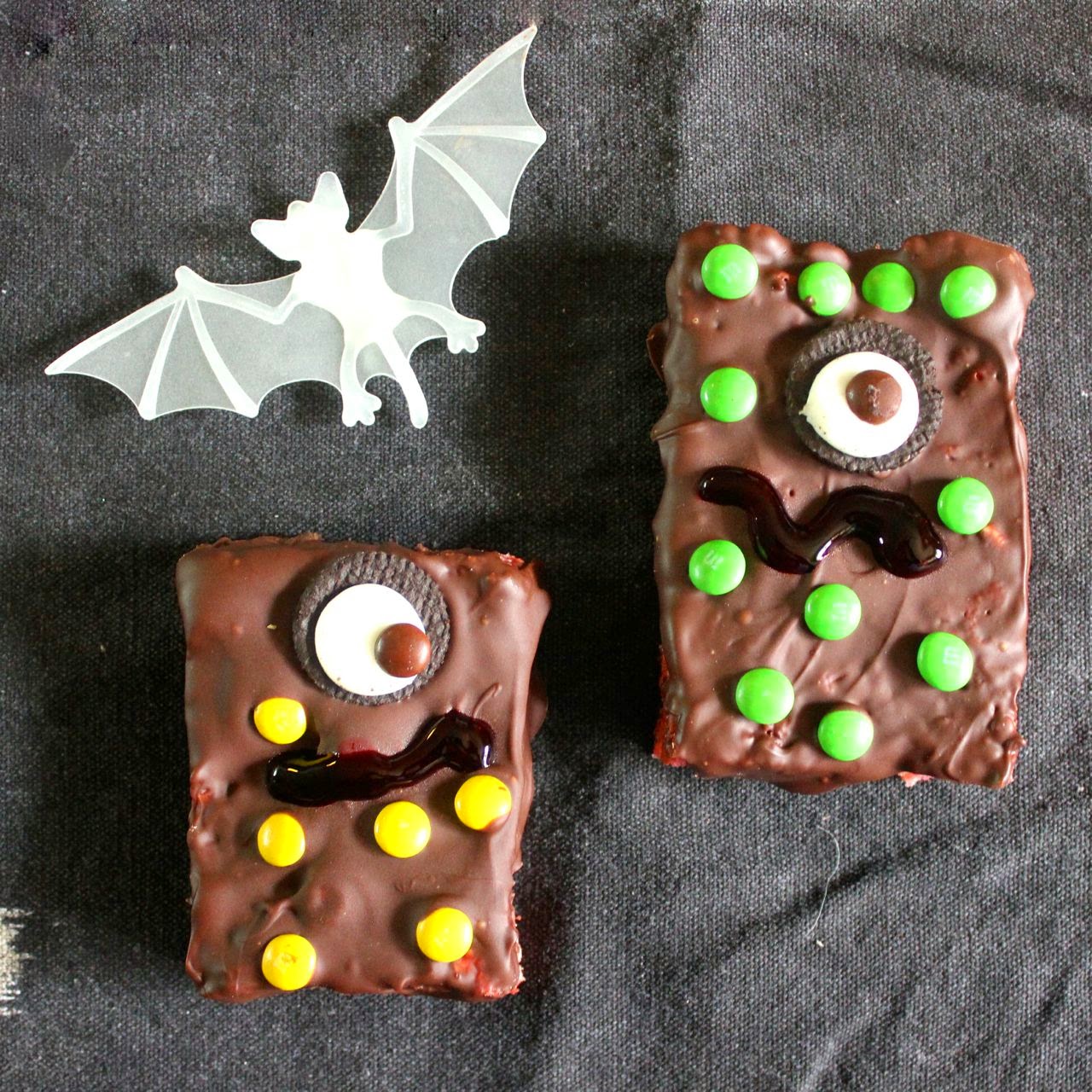 When Sylvia first tasted a rice krispie and her mouth went all red, I thought that was a powerful icing.  She loved the red so much she was smearing the gel over her mouth.  And by the time we were all eating the rice krispies, we all commented on how disgusting it tasted.  This was no sugar icing mixture.  It was pure food dye.  Red food dye!  That the kids were smearing over their lips and giggling in the mirror.  Oops!

So I post this recipe with the warning: do check the icing pen if you decide to buy one.  I will revert to my usual practice of making icing to pipe from a ziplock bag with the corner snipped or using one of my pipes.  At this this is not a piping exercise where precision is required!  However I do highly recommend making rice krispy treats using this recipe and topping it with chocolate.  So so good! 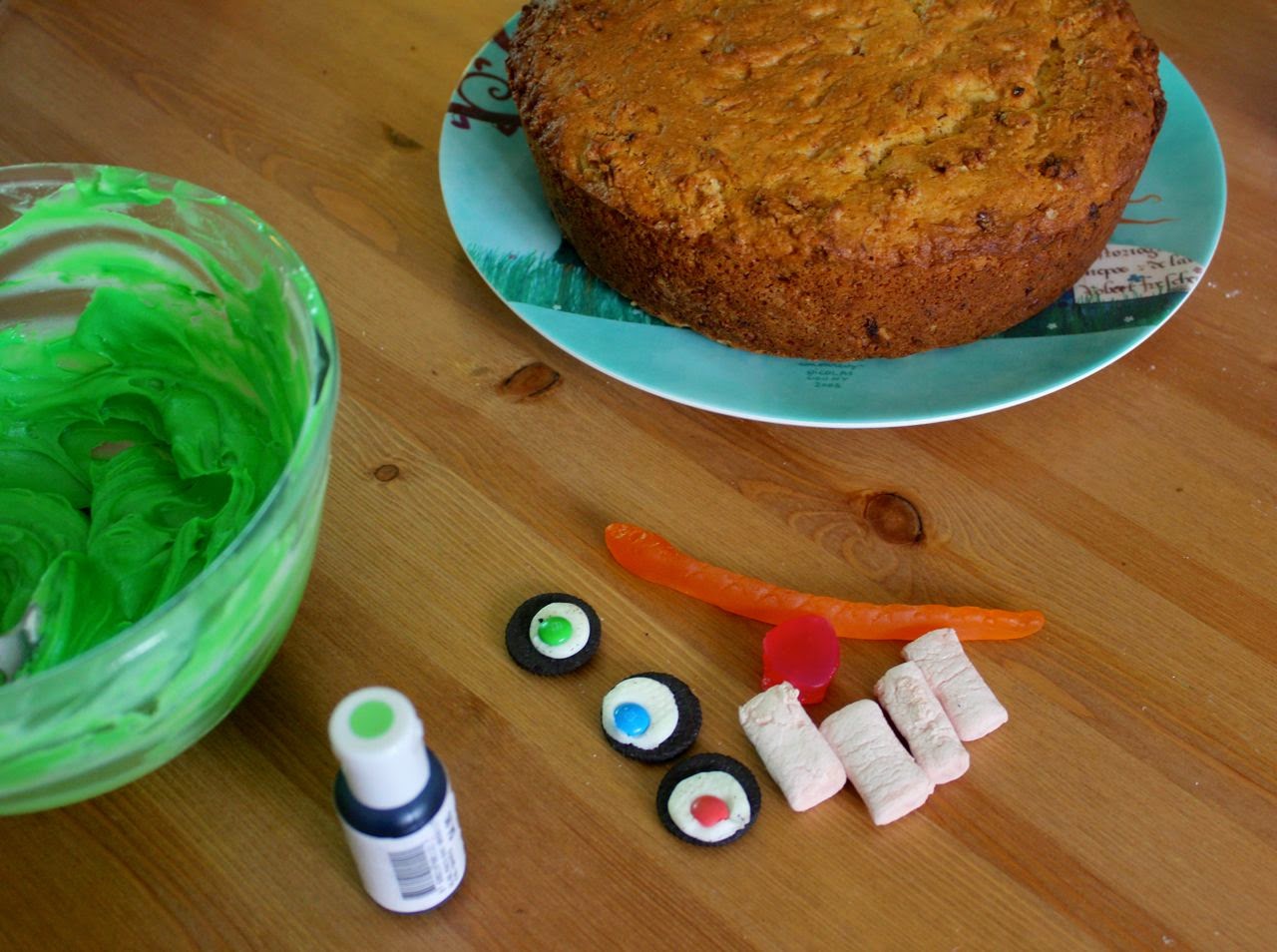 The other monster treat I made was a monster cake.  I took the path of least resistance here.  The cake I made was the banana yoghurt cake that we have loved on previous occasions.  I used the same simple cream cheese frosting I had used for the cake before but coloured it green.  The inspiration for the cake was a Charlie and Lola book called This is Actually My Party.   (The irony that it was more Sylvia's party than Alex and Ian's is not lost on me!  My mum also bought some pink cupcakes - in the top photo - which corresponded nicely with the story in the book.)

Given that very few kids were eating the cake, I liked that it didn't use many lollies (yep that is sweeties or candy).  In fact we had enough for it: mini oreos I had bought for the monsters (eyes), some vegan marshmallows I had bought (teeth), and some smarties (eyes), a jelly snack (mouth) and a jelly dinosaur cut into a round nose.  It was also an easy cake for Sylvia to help me make. 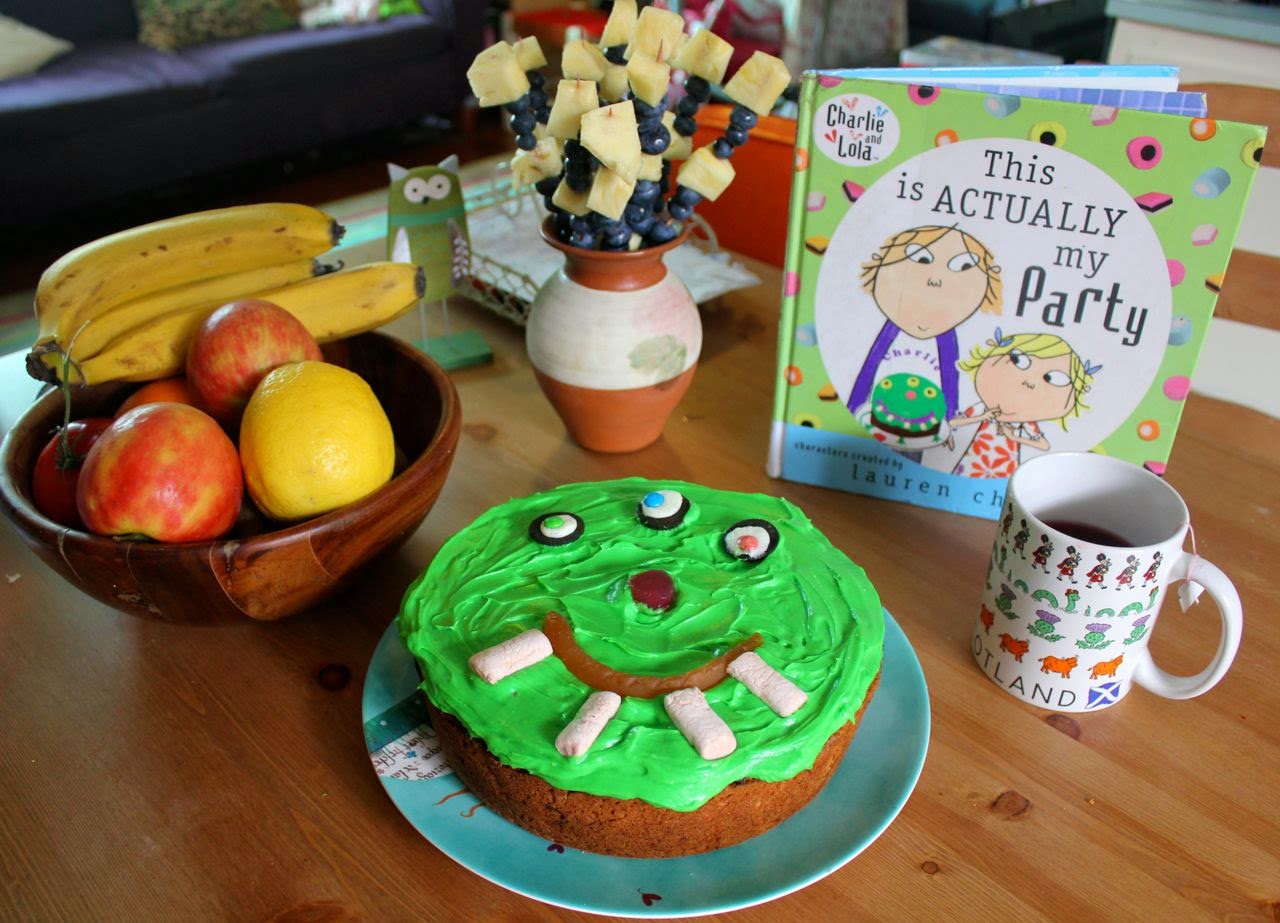 Food dye aside, the kids really loved the cake and rice krispy treats.  And the adults really loved the cake.  In an attempt to be a bit more healthy, I also made some skewers of blueberries and pineapple chunks.  I really liked them and they made a pretty addition to the table in a vase (see above photo).  I felt like I did well the birthday lunch in keeping the food simple.  We didn't have too many leftovers, though I do have a few pink cupcakes stashed in the freezer.

I am sending these monster rice krispies to Healthy Vegan Fridays #20 hosted by Kimmy of Rock my Vegan Socks and Robin of Vegan Dollhouse.

Mix all ingredients except food dye and rice bubbles into a large heatproof bowl.  Heat gently in the microwave until warm and gooey.  (I think I did about 1 minute).  Stir in a few drops of food dye or as much as you need for your desired colour.  Stir in rice bubbles until wall coated with gooey mixture.

Tip into a greased and lined lamington tin.  Smooth with the back of a spoon.  Refrigerate for an hour or two until firm.

Cut into rectangles (I cut 12 but there were rather big and we actually chopped them smaller to eat them).  Melt chocolate and spread over each rectangle.  Place mini oreos on melted chocolate to make eyes.  Pipe a squiggly mouth with red/pink icing.  Use m and ms to place pupils on eyes and dots over the monsters.

Refrigerate until firm before eating.  (Again this should only be an hour or two.)  I found that they were great kept firm in the fridge but we kept some leftovers at room temperature for a day or two and these were fine too.

*Note: to make these gluten free, choose a gluten free brand of puffed rice.  Eyes could be made by purchasing different sizes of chocolate buttons (some dark and some white) and use alternative lollies or pipe icing for the spots.  To make these vegan, you will need some vegan lollies to make the spots and pupils of the eyes or just pipe icing.  Thanks to Robin for the suggestion of using Skittles which are vegan!

On the Stereo:
Wreck and Ruin: Kasey Chambers and Shane Nicholson
Posted by Johanna GGG at 23:10