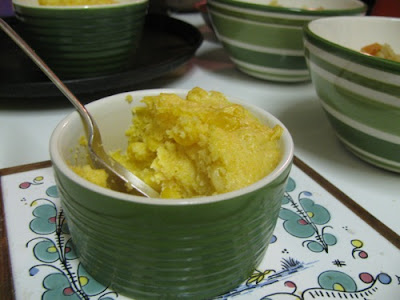 Eggs are a mystery to me.  I've never liked them.  Even as a child, my mum made me a separate dish when she made dinner with eggs.  Given this, it was no surprise that when it came to the Eggs theme for the Cookbook Challenge that I found it a tricky one. 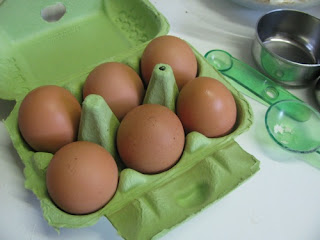 The theme called for a dish in which eggs were prominent.  Precisely the sort I rarely make.  I dislike cracking eggs.  I dislike their texture.  Any more than 3 eggs in a recipe is just too much for me.  I once made a cake with 12 eggs.  That was upon request.  Never again.  Another time I made a souffle with a friend.  Fortunately it was full of chocolate.  I considered making a vegan omelette for the Cookbook Challenge.  Or a vegan egg salad.  Such things interest me. 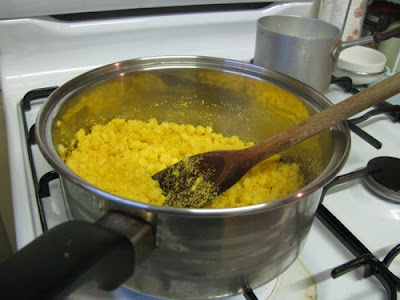 In the end I returned to a dish I once made many years ago that intrigued me.  Spoonbread.  It hails from the American South and has been compared to a Yorkshire pudding and described as a cornbread souffle.  I vaguely recall it as being more sturdy than the delicate souffle, which is why I wanted to revisit it. 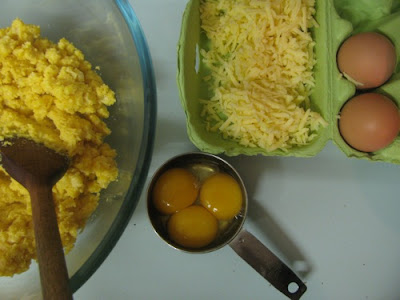 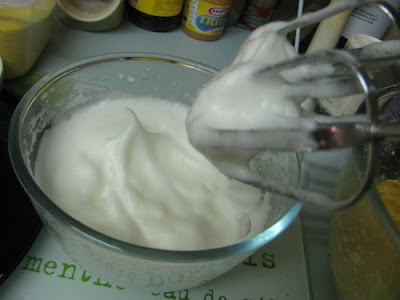 I can barely remember making spoonbread the first time.  It seemed like a large recipe.  I halved it and decided to cook it in ramekins rather than a large dish.  The recipe didn't give as much guidance as a novice like me needed.  I don't cook eggs or spoonbread enough to know what I was doing.  It was only after it went in the oven that I got nervous because I know that souffles are to feared. 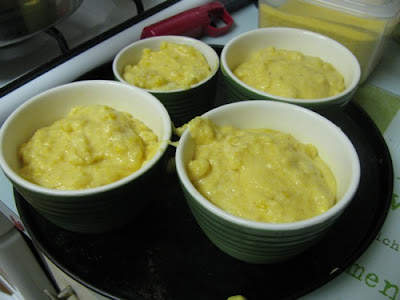 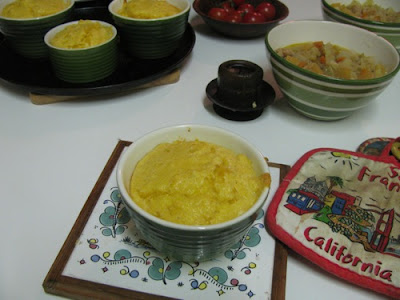 As it was, I needn't have worried.  This was as resilient as I had initially hoped.  No rise and fall.  Not even a lot of air in it.  It would have helped if the recipe had told me how to know when it was done.   I took it out when it was firm but not browned. It was cooked through.  That seemed right. We had it with a simple vegetable soup.  Not only did it wait for us after coming from the oven, but I put one of the leftover ramekins in the fridge and we ate it at room temperature 4 days later.  It still tasted good.

Sylvia wouldn't eat hers but she did enjoy making it with me.  I found a little ramekin for her.  I told her that it was a special one for her.  Since then, she will go to the cupboard and pull out these smaller ramekins and tell me they are special ones for Sylvia. 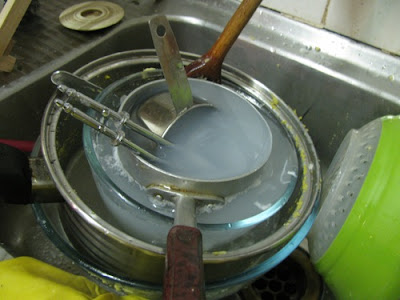 It was a nice meal but not something I am eager to make again.  The spoonbread seemed more like cornbread than souffle.  Quite frankly I prefer other cornbread recipes with less eggs and less dishes.  E agrees!

If you want to see what my Cookbook Challenge Comrades made, go to the community page.

Previously on Green Gourmet Giraffe:
This time last year: Greens, Carrots and Garden Update
This time two years ago: GYO Bill’s Broccoli Salad
This time three years ago: What does a pagan eat anyway?
This time four years ago: Waiter waiter there’s a shark in my chilli non carne

Heat the milk in a saucepan until it just reaches boiling point and remove from heat before it boils (also known as scalding the milk).

Melt butter over medium heat in a large saucepan or frypan and fry the corn and salt for a few minutes, stirring occasionally.  Add cornmeal and fry another 5 minutes, stirring frequently.  I found this went quite dry and gritty.

Pour scalded milk into corn mixture and stir in.  It will thicken.  Remove from the heat and transfer to a large mixing bowl.  Stir in cheese and egg yolks.  Cool slightly.

Beat egg whites until stiff (I used electric beaters but a house mate of mine used to do it with rotary beaters in a copper bowl).  Gently fold into the cheesy corn mixture with a metal spoon.  Spoon into greased ramekins.  It is ok if it doesn't reach the top.

Bake for about 25 minutes or until it is firm to touch.  Eat hot but it doesn't need to be eaten immediately.  We had one leftover and popped it in the fridge for about 3 days and then ate it cold with dinner like a bread.

On the stereo:
New Wave Playlist: various artists
Posted by Johanna GGG at 09:52