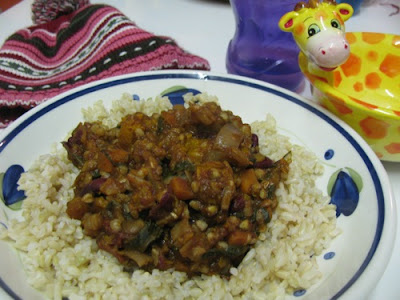 It has been a week of lateral thinking about food and cooking.  I watched a great documentary series on the telly called Recipe for Murder about Sydney housewives poisoning people with rat poison in the 1950s.  We watched an old episode of 30 Rock last night when Liz Lemon said that she used her oven to warm her jeans.  Then this morning Sylvia took a bite of a cake of caramel soap.  As for me, I have made chilli non carne with carob!

I have never been a fan of carob.  So when Ricki and Kim announced that carob was the theme for this month's Sweet or Savoury (SOS) event, I wasn't sure I would participate.  I wanted to.  It is the year anniversary of the event.  Then I discovered that Sylvia likes it.  So I bought a bag and now I must use it. 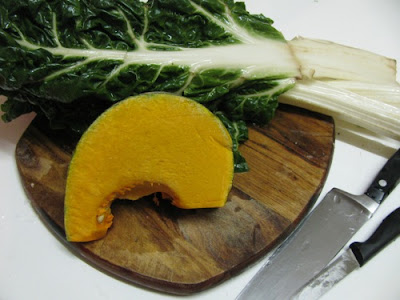 Sylvia loves the carob cookies that my neighbour makes.  I begged a copy of the recipe but it has eggs in it so it wasn't right for the event but stay tuned.  For the SOS challenge, I just couldn't face a sweet carob dish and decided there must be a savoury recipe where I could try it.  My internet searches yielded nothing so I got creative.  I decided to try a chilli non carne with carob rather than cocoa.  It struck me that buckwheat would be a great pairing for carob so this went in too, as did some vegies from the Kinglake Farmers Market. 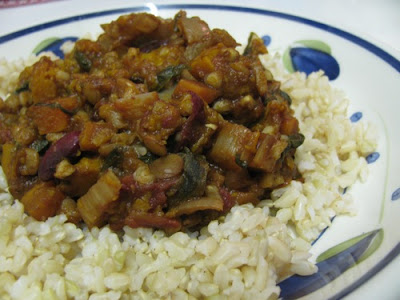 While not my favourite chilli non carne, it was a good one.  I enjoyed the texture of the soft buckwheat, lentils and kidney beans.  The carob gave it a pleasing dark richness.  However I couldn't work out if it was my prejudice against the stuff or that I was unused to it or that I just needed some more spices and seasoning but it seems to be a sweeter flavour than usual.  Despite that, I would try carob in a chilli non carne again.  After all, Ricki and Kim have pointed out that it is packed with nutrients.  And Sylvia loves carob.

Chilli non carne with carob and kasha
Loosely based on this recipe
serves 4-6
Heat the oil in a stock pot and fry the onion, garlic and carrots for about 10-15 minutes over a medium heat until softened.  Ideally at this point add carob, oregano, smoked paprika and chilli powder, and stir for one minute.  If, like me, you forget, just add spices with vegies.  Add stock, silverbeet, pumpkin, tomatoes, kidney beans and lentils.  Bring to the boil and simmer for about 10 minutes.  Add kasha/buckwheat and simmer for another 20 minutes or until lentils and kasha are soft.  I let mine sit for 30 minutes because we ate after we had put Sylvia to bed but this depends on your timing.

On the Stereo:
Picaresque: The Decemberists
Posted by Johanna GGG at 15:43