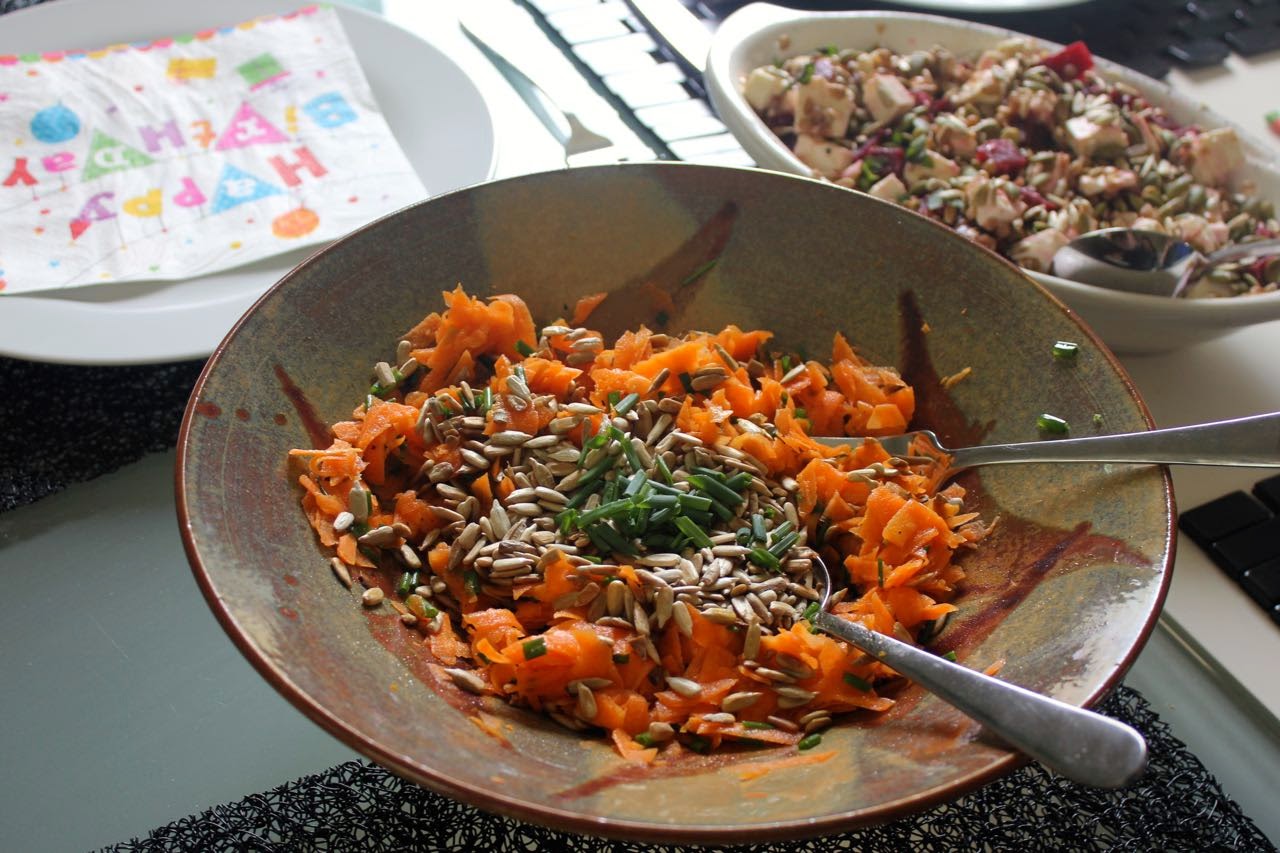 I don't know how he did it.  E opened his bottle of chilli tomato sauce and it exploded everywhere.  Sauce found its way into his eye sending him yelping to the cold water tap.  Later we found blobs of sauce on the tv, the heater, my computer, the couch, the rug.  At the time we didn't notice because I was taking the above photo, E was rinsing his eye and Sylvia burst into tears at the uproar.  That was the last photo I took of the meal. 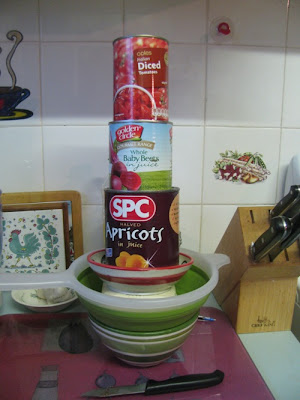 Sauce aside, it was an excellent meal.  I made tofu nuggets that came from Vegan Dad, a blogger for whom I have great respect.   It amused me that the other blogger I took some inspiration from was Your Vegan Mom.  (Mom, Dad, you're the best vegan parents!) I followed Vegan Dad's advice and pressed as much water out of the tofu as possible (see my tower of weighty tins above) rather than marinating them as Vegan Mum suggested. 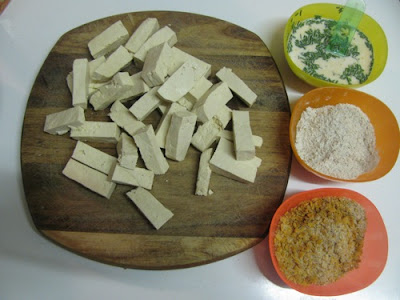 I am not usually one for cooking unmarinated tofu but this worked because the crust was so full of flavour.  Vegan Dad fried his but I followed My Vegan Mom and baked them.  They were really crispy.  Sylvia loved them dipped in tomato sauce.  (She loves anything dipped in tomato sauce).  She is so fussy that I couldn't believe how she hoovered her way through 4 or 5 of these.  They were just like fish fingers for vegan kids.  I would probably prefer them in dipped in mayonnaise or something like Sarah's Queso Dip. 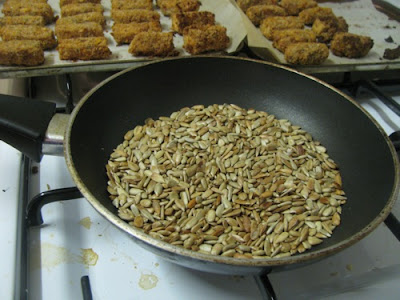 I had made the tofu nuggets because I wanted something to make with the carrot and seed salad.  The salad was made for the Cookbook Challenge.  The theme was crunchy. (See what others made here.)  Not a great theme for the past few weeks when I have had toothache and then a cold, which left me wanting soft comforting soups.  After the Easter excesses, however, I was ready for a virtuous salad.

I joined the Cookbook Challenge to nudge me into using cookbooks that get neglected too easily in this online world.  The salad was from the Rose Bakery's Breakfast, Lunch and Tea cookbook that I got for Christmas from Fran and John.  I admired the book greatly and then lost it in the clutter.  Having now made the salad and pancakes I must try and use this cookbook more. 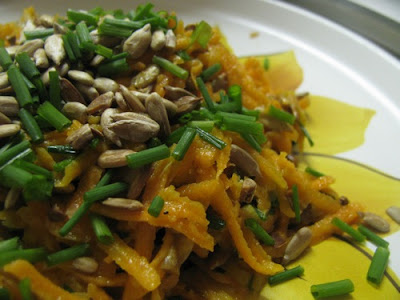 I made a Carrot and Seed Salad that had plenty of flavour and texture from marrying carrots, chives and sunflower seeds.  Instead of just using lemon juice I put in a spoonful of leftover guacamole.  It worked a treat but might have explained why the leftover salad was inedible the next day.  I suspect pure lemon juice would keep better than avocado. 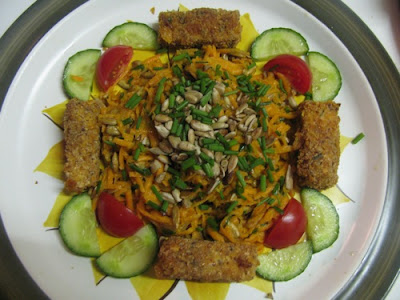 The irony of the meal was that Sylvia and I had been out in town that day.  I had hoped to try the vegan sausage rolls at Lord of the Fries but they had stopped making them the day before (I had only seen them a week ago).  So we had sushi in Degraves Street while watching a jazz trio.  Sylvia had an inari.  I had thought she might like the rice stuffed in the tofu pockets.  She ate the rice but refused the tofu.  So it was all the more pleasing to see her eat the tofu nuggets.  There is more than one way to get tofu into a toddler!

I hope everyone (those with children and those who mother others) has had a nice Mothers Day in Australia and America.  We celebrated with a lovely trip out of town yesterday, which was just as well because I spent most of today in bed with a cold.  I thought it might be a good time to update you on Sylvia, who continues to entertain us. 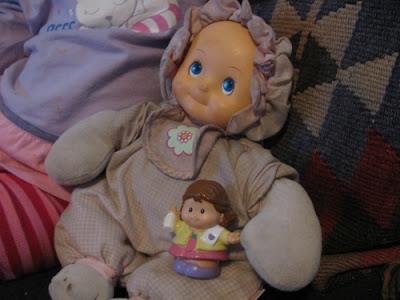 Some of her latest amusements are babushka dolls, beaded necklaces and baking pumpkin scones with me.  Her favourite book is a Rupert Bear annual.  She loves all the characters - Bill Badger, Algie Pug, Lord Ozrik, Dicken of the Dell, but most of all she loved Gregory Guinea Pig.  She asks where they are and loves us to sing songs about them.  There have been a few firsts recently.  Sylvia has mastered the kazoo, had her first visit to the dentist (to watch me), and broken a drinking glass.  She is less and less keen to sit in the highchair, though there are still times it saves my sanity to strap her in.  She is still attached to dolly but now dolly has her own dolly, known as dolly's lady.

Update 2014 - I have updated the photo of the salad at the top of the post, having had a chance to photograph it in natural light without the tomato sauce drama to distract!


Press tofu for about 30-45 minutes.  Slice into fingers (mine were about 2 inches long and half an inch thick).

Place milk, flour and half the crumb mixtures into three shallow bowls and mix each well.  Dip a piece of tofu in the milk, then in the flour, then in the milk again and then in the crumbs.  Repeat with all tofu pieces.  I found that the crumbs got a bit soggy so I suggest only using half at first and refilling when you use it up.

Place crumbed tofu pieces on a lined oven tray.  Spray with oil.  Bake at 220 C (I had my oven on 200 C on fan forced) for about 10 minutes.  Turn them over and spray the other side with oil.  Return to the oven for about 15 minutes or until crisp.

Update: made these with cauliflower instead of tofu - lightly steamed florets of the head of cauliflower for about 10 min until tender.  Once dipped in the crumb coating I baked it for 20 minutes at 240 C.  Delicious!

Update 2021: made these with panko breadcrumbs instead of crushed cornflakes, also fried them not baked, and they were excellent and so crispy.

On the Stereo:
Singles: New order
Posted by Johanna GGG at 19:48