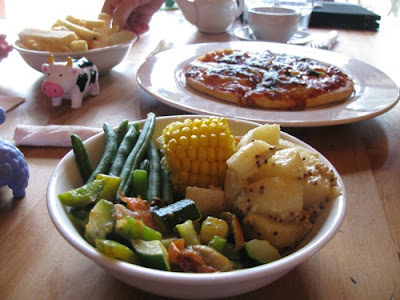 We had a drive out of town on the weekend to visit Kinglake Farmers Market, followed by lunch at Aus 57 Pizza and Pasta Bar.  The drive there was not too long - around an hour - but did involve some very curvy roads, albeit with wonderful scenic views, through the Kinglake National Park. 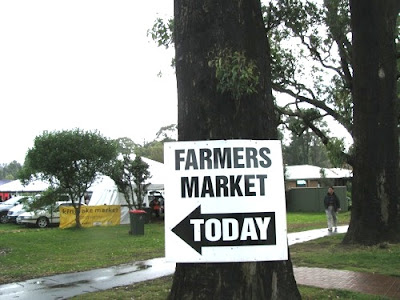 We chose the destination after hearing it mentioned on the radio.  Until then Kinglake was better known to us as one of the towns badly affected by the Black Saturday bushfires.  Even two years later, its impact on the trees was still clear to see with many of them sporting blackened trunks and a peach fuzz of new growth. 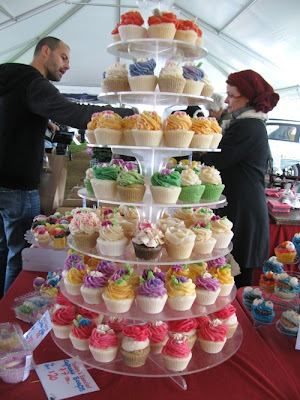 The market was not huge but had many interesting stalls and friendly folk.  The first stall that caught my eye was the above one.  I was quite excited by all the cupcakes, even when I found out they were soap sculptures.  E thought they looked quite awkward to use and I had to explain that some people are quite happy to display pretty soaps in their bathrooms. 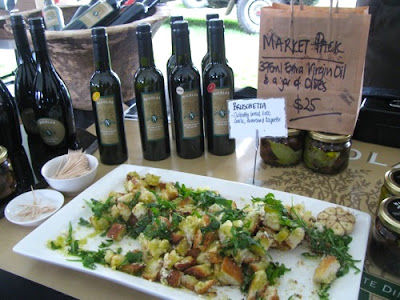 We enjoyed quite a bit of tasting.  I loved this olive oil stall which had one of the best tastings of olive oil that I have seen.  Usually olive oil is in little dipping bowls with chunks of bread.  This display had a colourful platter of ciabatta bread, olive oil, garlic, rocket and parmesan.  I felt like sitting down to a plateful of it. 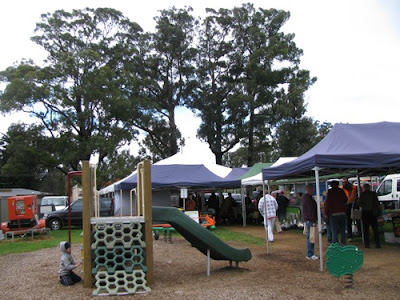 Sylvia loves to ask "are we going to the park?"  Or some days when we are off to the shops, she tells me "park first".  So it was nice that there was a small kids playground in the midst of the stalls.  Unfortunately, it was not quite the weather for it.  Sylvia had barely got on the swing when the rain come on.  It was a day of sunshine one moment and rain the next. 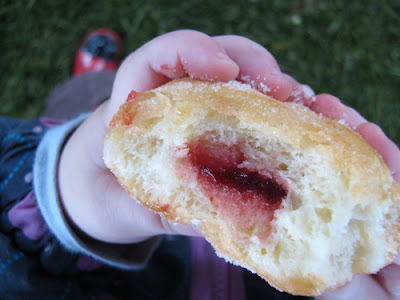 I had thought we might also have lunch at the market but it didn't really cater to vegetarians in that way.  There was a bbq and a stall selling dim sims and dumplings to eat.  Neither had veg alternatives, though there were vegetarian dumplings to take home to cook.  Sweet food was another matter.  E queued up for poffertjes (little dutch pancakes) and I bought a hot jam doughnut.  The doughnut stall cooked them fresh and they were pretty good (though not quite up to Vic Market standard) and had lots of delicious tarts and cakes.  I also noticed a stall doing gluhwein which was tempting, given the cold wet weather that sent rain trickling down between the covers. 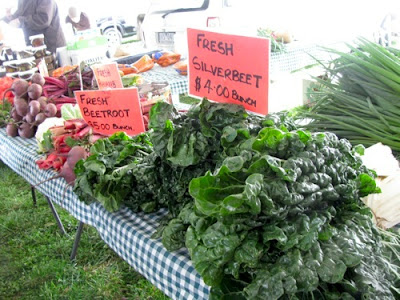 After a sweet snack, we got down to the business of spending our money.  I was disappointed that the rustic loaves of bread that looked so good on the way in had sold out by the time I returned.  There was plenty else to take my fancy.  I had meant to take a picture of our goods when we got home but life is too chaotic.  We left the market with caramel and dragonfruit soap, chilli rocky road, silverbeet, beetroot, parsnips, tomatoes, potatoes, strawberries, chilli jam and a bag of fudge.

It was John and Carol Walker's fudge that was one of my favourites.  Sylvia and I tasted it while waiting for E to take bags back to the car.  I was immediately smitten and asked what was in it.  As I suspected it had condensed milk.  I had a lovely chat to them about how good it was without the grittiness that sugar usually leave in fudge. 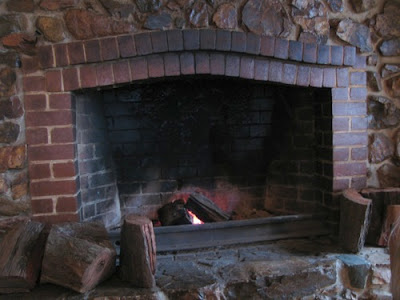 After all that driving and strolling through the market, we were ready for lunch.  We walked across the road to Aus 57 Pizza and Pasta Bar, with low expectations.  From the outside it looked like just the sort of country cafe that has not even heard of vegetarians.  But appearances can be deceptive.  Inside it was warm and welcoming with an open fire and honey coloured pine furniture.

I swithered over a vegetarian lasagna but ordered margherita pizza with sides of chips and vegetables.  Simple food that I hoped Sylvia might share with me.  E had an egg and bacon sandwich with an English Breakfast tea.  We were delighted with the food.  The pizza was made with fresh tomato, onion ring and whole basil leaves.  A bit too chunky for Sylvia but I loved it.  The base could have been a little crispier but the toppings were so good that it didn't matter. 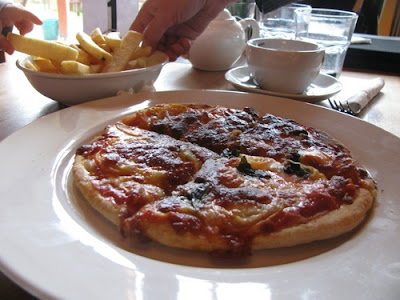 The chips were lovely but the vegetable side dish was stunning (see top photo).  Potatoes in a mustard sauce, zucchini, capsicum and tomato cooked almost as a ratatouille, green beans cooked perfectly and corn on the cob.  What proved how good the vegies were, was that E preferred them over the chips.  Sylvia turned up her nose and concentrated on the chips.

We really enjoyed our visit to Kinglake, though I was disappointed on the way out to see we missed the House of Bottles which has a tearoom.  Next time that will be added to the itinerary.  Meanwhile, all Sylvia needed were a few puddles.  She had on her ladybird gumboots and was hard to get into the car once she discovered how much fun she could have stomping in all the puddles.  I, on the other hand, have a fridge full of vegetables so expect to see a few appear on the blog soon.