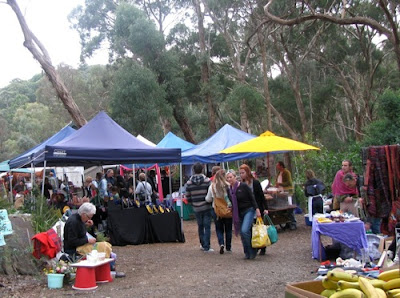 I had a yen to get out of town on Mothers Day, a few weeks back.  I went to St Andrews Market many years ago on a wet miserable day and always meant to return.  This was the weekend for it.  The Market, held every Saturday and only 40 minutes drive North East of Melbourne CBD, takes you into a world of kookaburras, tree huggers and colourful crafts. 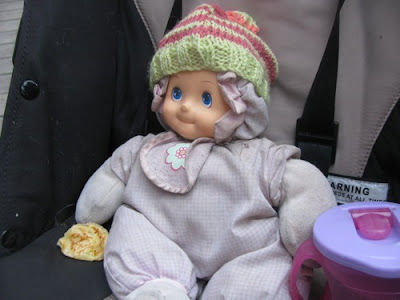 First stop was the hats.  Sylvia loved trying on the pink crochet cloche with the woollen flower.  Instead, we bought her the hippy beanie with the green rim and little stalk on top that made her look like one of May Gibbs' gumnut babies.  Dolly also got a new hat and was very pleased with it. 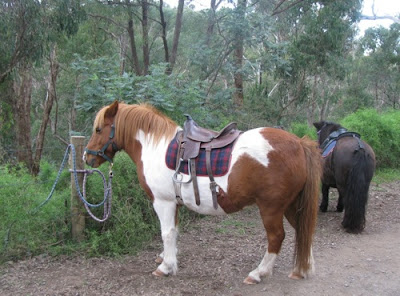 We wondered over to look at the pony rides.  I gave the wee ponies a pat but Sylvia just frowned at them and refused to go near them.  No pony rides for her. 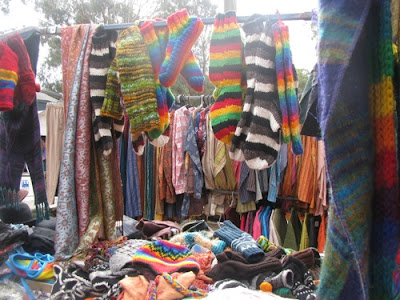 There was an eclectic mix of stalls.  I had to walk past the green celtic-patterned plates and bowls without looking too closely for fear I would get attached.  I loved the funky patterned oven mitts and the junk in the trash and treasure stalls.  We bought Sylvia a little green frog that she loved from a stall packed with old toys.  There were lots of bright clothes stalls selling the sort of stuff you would never find in a department store.  And it is just the place for finger puppets, second hand books, buskers and massage. 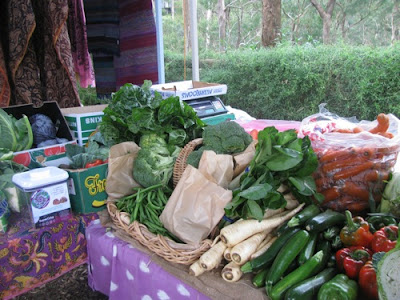 It was lovely to buy some good quality organic vegies.  The market is predominately crafts but there are quite a few vegie stalls dotted about.  You could buy bread, potatoes, pine mushrooms, nuts and raw chocolate at the various stalls. 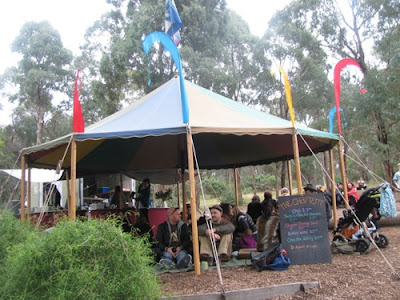 Or you could just sit and relax in the chai tent.  We didn't go in there but it looked like the sort of place where a lot of chillaxing was going on.  I don't regret passing it by.  I do wish I had bought some of the lovely baked goods from this stall below.  Unfortunately we never get to markets early enough to get photos of such stalls overflowing with goods. 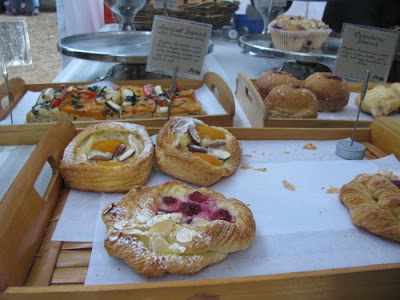 We had planned to go elsewhere for lunch but were drawn in by the food vans.  I had a tofu burger with hummus and salad in a wrap.  The place where I purchased it seemed to be run by a quirky guy wearing a funny little beanie.  I loved generous amounts of fresh salad and hummus.  The latter tasted home made because it had lots of lovely texture and flavour.  Sylvia was very keen on eating pieces of pita bread that I tore off my wrap. 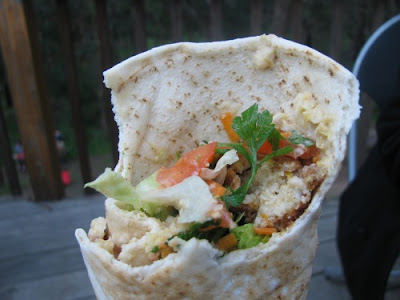 E went to a different stall and had spicy tofu in a roti wrap.  He was very impressed with it but it was a little spicy for me.  I bought a savoury pumpkin muffin for Sylvia but she was not keen on it (it wasn't great).  She was far more interested in the poffertjes (little dutch pancakes) with butter and maple syrup that E had for afters.  Dolly also enjoyed them and you can see she had one next to her in the stroller if you look at the photo near the top of the post. 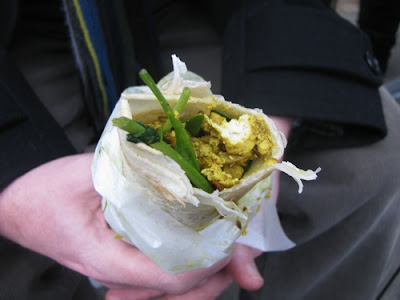 The nicest part of lunch was sitting on a deck overlooking the bush.  After a while we spotted some kookaburras flying about so we sauntered down to sit on the edge of the bush.  It was wonderfully peaceful to be outdoors, watching the birds flitting among the trees. 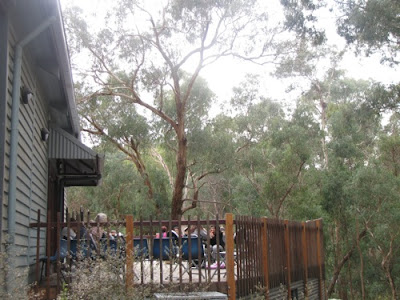 The Market closes at 2pm so eventually it was time to go.  On our way back to the car we stumbled upon St Andrews Bakery tucked away off the main road opposite the market.  I have seen their bread and baked goods at farmers markets around Melbourne.  It has a fine reputation.

We brought some pumpkin scones, some hot stripe buns (think hot cross buns with a stripe rather than a cross) and a loaf of sourdough rye.  All freshly baked.  If I lived closer I would come here often.  Sylvia was excited by the pumpkin scones but she had only started nibbling on one in the car when she fell asleep.  Poor wee thing was dog-tired. 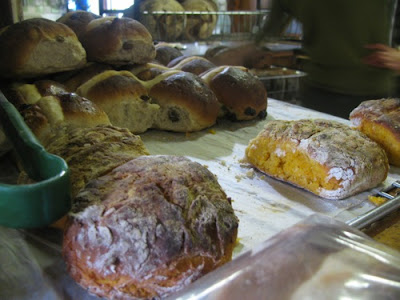