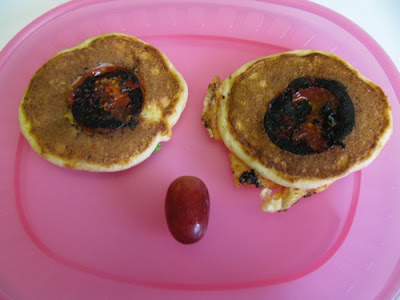 It was been a quiet weekend here.  Too cold and wet to feel like venturing outside.  The washing we hung out was so damp that we brought it inside to dry in front of the heater.  Just the weather to bake and fry and eat in a warm home.  We have had lots of pancakes and purple and porridge.  Sylvia has discovered boiled eggs.  Lots to taste.  Lots to learn. 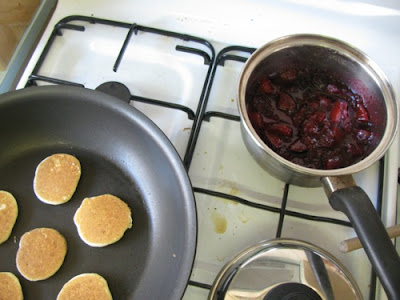 I tried the Rose Bakery's ricotta hotcakes during the week and they were great.  (Quite similar to Bill Granger's famous ricotta hotcakes.)  Sylvia loved them so much that she told me we must make them again.  I enjoyed them but prefer using only one bowl for pancakes and no electric beaters.  I halved the recipe and had half a tub of ricotta leftover to make another batch on the weekend. 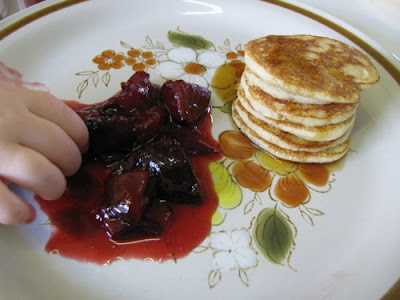 These pancakes are great with stewed plums.  I stewed some plums with pomegranate and strawberry juice during the week and more with barley malt syrup and golden syrup on the weekend.  The first batch were best.  Sylvia loved them.  She ate less of the latter which were more molassesy but still loves making them.  Sitting down in the morning to chop and stew plums with a toddler is fun.  Quite a few get eaten before they are stewed but I don't mind. 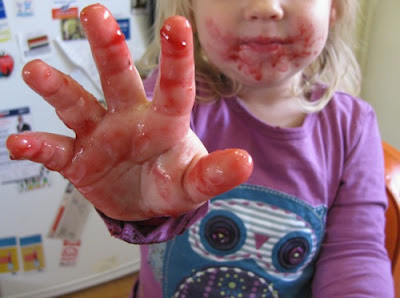 The mess is incredible.  Sylvia eats stewed plums with her hands.  I offer a spoon.  She ignores it.  Perhaps she likes to get mucky because one of her other favourite things right now is spending hours at the sink washing her hands.  She also loves asking where we are (eg "is this a shop?" in the middle of the supermarket) and stomping in puddles with her ladybird gumboots.  Everything takes forever.  I never have enough time for lunch.  I had meant to make her something savoury but we ended up just eating pancakes and plums for lunch, with a few chunks of cheese.  It wasn't that sweet.  Yet it didn't seem like a proper meal. 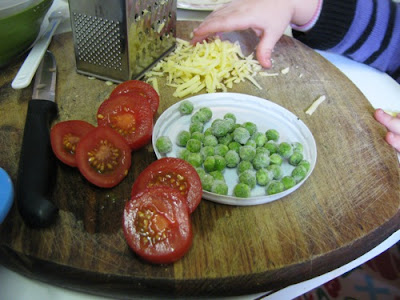 I tried a different approach on the weekend.  I didn't want to make all the pancakes savoury so I added tomatoes, peas and cheese when I fried them.  Since then I have found a similar idea for vegan savoury pancakes that uses even more vegetables.  It means we still had half the pancake batter to make a sweet version to follow. 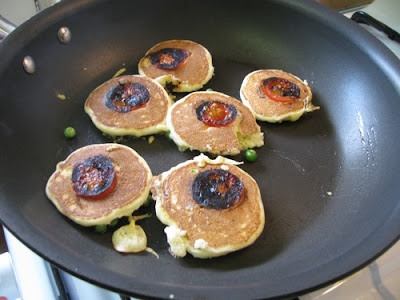 The savoury pancakes needed to cool slightly before eating or the sizzling tomatoes would take the skin off your tongue.  But they were so good.  The peas and cheese were ok but the tomatoes were the best.  They were like tomato jam with a hint of charcoal.  Plus, if you put two on a plate with a grape (top photo) they looked like like an owl.  Sylvia wasn't so impressed with the tomatoes.  She just wanted pancakes. 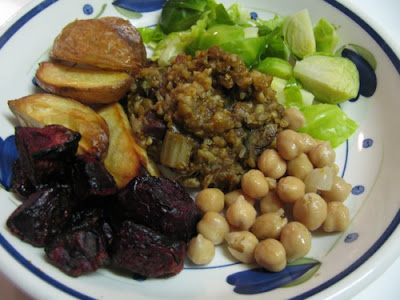 On Saturday night I roasted potatoes and beetroots that I bought at Kinglake Farmers Market and boiled some brussels sprouts.  (Leftovers went into curry.)  I serve them with chickpeas and chilli non carne.  It was a wonderful meal but brings up two issues with feeding children.  One is how many of us remembering our mothers boiling vegetables until they were soft and soggy.  I have tried boiling vegetables until just cooked but sylvia wants hers really soft so I have started to boil some vegetables more than I might usually.

The other issue is about colour and food.  I see so many people giving tips about avoiding beetroot stains on their hands.  However I don't mind beetroot stains on my hands.  They amuse me.  They amuse Sylvia too.  She was intent on only eating the roast potatoes (and they were fantastic).  Then she wanted pink hands like mine.  She learnt that if she bit the beetroot and rubbed it on her hand it would turn pink.  I showed her if she rubbed a chickpea on her beetroot she would have purple chickpeas.  This way she ate the beetroot and lots of chickpeas.  Hurrah for purple food! 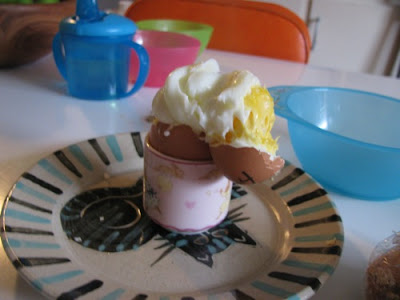 Lastly, I confess that I also lack the basic skill of boiling an egg.  I've never liked eggs.  E has started making Sylvia boiled eggs.  She asked me to boil her an egg while he slept in.  I failed dismally.  The egg was gooey inside.  I put it in the microwave and it sort of burst out of the shell in an eggy cloud.  Sylvia ate the white but wasn't keen on the yolk.  (Incidentally, I always thought an egg would blow the door off a microwave until I saw Jack Dee microwaving his celebrity eggs and they just made disappointingly small explosions.) 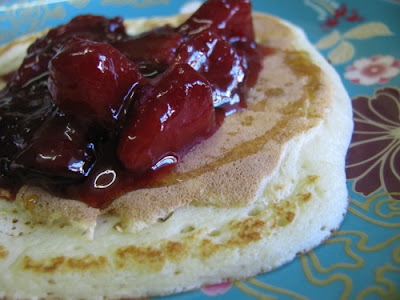 I am sending the Ricotta Hotcakes with Stewed Plums to Ren of Fabulicious Food who is hosting a new event called Simple and Seasonal.  I thought she might like to see what the other half of the world is eating in May.

Separate eggs so the whites are in a small mixing bowl and the yolks are in a medium mixing bowl.  Use electric beaters to beat the egg whites until they are at stiff peak stage.  Now beat together the yolks, milk and ricotta.  Stir the dry ingredients into the ricotta mixture and then gently fold in the egg whites.  Heat a large frypan over medium heat and lightly grease with butter (I often use a piece of kitchen paper to rub a little butter over it so there isn't too much.)  Spoon dessertspoonfuls of batter into the pan and cook until the mixture bubbles.  Flip over and cook another minute or two until golden brown on both sides.  I think I did four batches of 5-6.

Savoury tomato pancakes: Slice up some cherry tomatoes.  Drop slices (flat side down) onto the pan at regular intervals and cook for about 1 minute on a medium high heat.  Drop a spoonful of pancake batter over the tomatoes and cook for about 4-5 minutes until mixture is bubbling.  Drop some frozen peas and grated cheese on the uncooked side and flip.  Cook another minute or two.  The cheese side wont brown so much where the cheese is and the tomatoes will look burnt but taste great.

Sweet plum pancakes: top with stewed plums below and a drizzle of maple syrup if desired.

Place juice, cinnamon, syrup and apple concentrate in a medium saucepan.  Cook for about 4-5 minutes until syrupy.  While the liquids are cooking, stone and chop the plums.  Add plums to syrup and gently cook for about 6-10 minutes until fruit softens.  Serve warm or room temperature.

On the Stereo:
Heavy Horses: Jethro Tull
Posted by Johanna GGG at 07:46