BC Pea and sun-dried tomato porridge 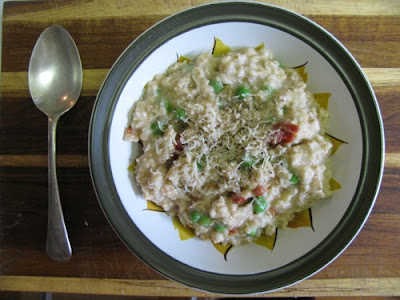 When I agreed to host the Breakfast Club event all I could think was that there aren't enough savoury breakfasts for vegetarians.  Hence I chose the theme of Vegetarian and Savoury.  It has made me think about breakfast.  So let me share a few thoughts and a recipe inspired by the event.

I am not a morning person.  I don't have lots of energy and smiles for breakfast.  We don't have tablecloths and toast racks.  Yet I have always eaten breakfast.  Every day.  Even when going out to brunch I might have something to break the fast before I head out the door.  I am grumpy without food first thing in the morning. 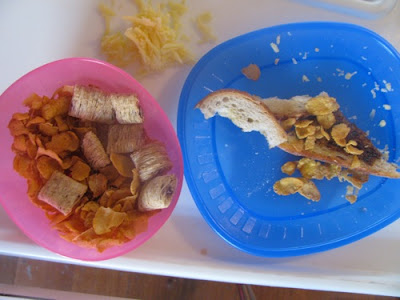 As a child I ate cereal with milk on it but as an adult I am not so big on cereal.  Mostly I enjoy toast, yoghurt, smoothies and fruit.  I love a good fry up if there are no meat or eggs involved. It is just that I rarely have a lot of time for breakfast.  Lately breakfasts have become more of a challenge as I often wait until Sylvia has her cereal before starting on toast and fruit, for fear I will distract her - it doesn't take much.  Most days it seems she would much prefer to feed dolly or pat zinc or roar like a wild thing than to eat her breakfast. 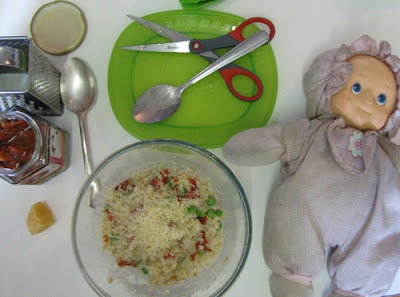 E and I talk about what breakfast ideas we might try with Sylvia.  He loves porridge and is going to make some for her.  I applaud the idea.  However I have never liked porridge.  As a child it was something sophisticated that my dad and my sister ate.  The gloopy nature doesn't seem right to me.  It doesn't make sense that I can't stand the texture when I love so many foods with oats in them. 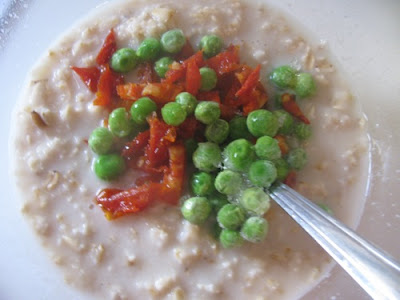 I saw Janet's entry to the Breakfast Club and immediately was inspired.  She made a savoury porridge with soy sauce and nutritional yeast flakes.  I don't know why savoury porridge appeals so much more than the sweet stuff but I can't be the only one as I have heard of Scots salting their porridge (and pouring it in a drawer and slicing it up when cold).  Though I suspect if they saw my version, they might cry out, "that's no how ye make porridge".  (Sorry, that catchphrase stuck from the silly advertisement for oats.) 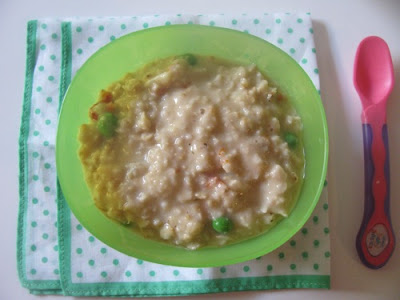 I have tried a veggie-packed version of oats upma before which was ok but not quite right.  So I looked at Janet's and thought I just need a few veg.  Vegetables that don't need a lot of preparation in the morning.  Frozen peas and sun-dried tomatoes.  I liked it.  It was satisfying if still a little gloopy.  I suspect it helped that there was no milk or cream involved as I am not really into creamy.  I consulted Yahoo answers and didn't really judge amounts,  The recipe below is merely a guide as to what I did.  Other vegetables such a pumpkin and baby spinach could be used.  I am not sure this will be an everyday breakfast but maybe it will sneak in on some winter mornings as a warming alternative to toast. 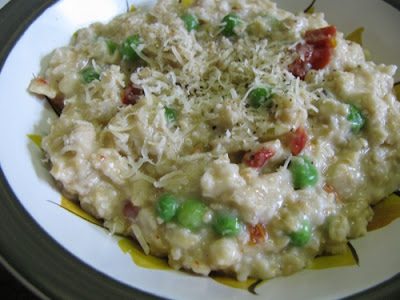 Place oats, water and salt in a medium sized bowl.  Microwave until mixture has thickened and oats are cooked.  It took me about two and a half minutes the first time and three minutes the second time.  I stirred after the first minute and then after every thirty seconds.  Then add frozen peas, sun-dried tomatoes, cheese and soy sauce to taste.  Eat hot.

On the stereo:
Waiting for the Twilight: TAC
Posted by Johanna GGG at 16:12