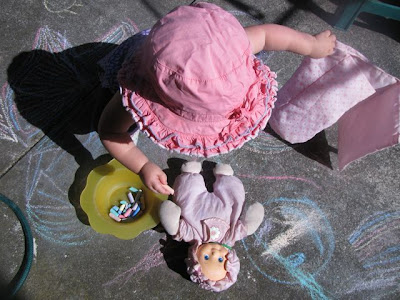 I've been on a quest for kiddie-friendly food that also appeals to adults. It is not for Sylvia but for me. I feel she would be happy to eat plain vegies and tofu or beans every night but I want more for her. I want her to taste more flavours, to enjoy some of what we have, and to be able to eat out where plain food is anathema. I also would be much happier if I only had one meal to prepare each night. So today I will share some of my hit and miss experiments and a glimmer of hope.

Over the past month, I have been trying a few different meals for sylvia and she seems to be willing to try some new things. It never ceases to amaze me as I watch her development. It is constant change. She will now drink from a cup occasionally without a spout or straw (though she is just as likely to throw it on the floor if I don't watch her), she will tell me she wants bikkies if I ask her what she wants for breakfast, and now Dolly often wants a taste too. 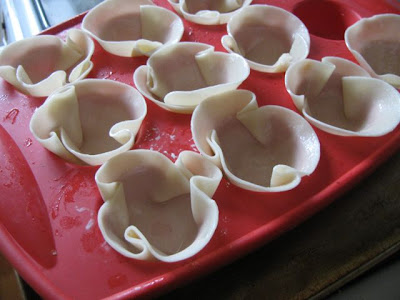 The first meal that I tried was some geegaw cups. I saw them in a magazine while queuing in a shop and liked the idea. I tried them filled with some seasoned vegetables and crumbled tofu for E and myself (a bit like this rice paper roll filling) but it was such a light meal all by themselves that I had to bake him some muffins. I think they would make a good adult appetiser. 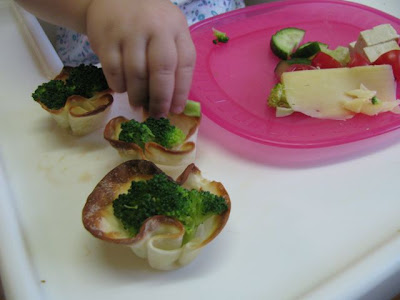 For kids, they are a nice way to present food a little differently. Sylvia loves broccoli so she enjoyed eating it out of these cups and actually seemed to enjoy nibbling on the cups themselves. They were quick and easy to do and I made ravioli out of the remaining wrappers.

Another source of inspiration for Sylvia's meals is to see what sort of food they are feeding her at her child care centre. Not that this guarantees she will eat the food. One day I heard that she had enjoyed some quiches made using puff pastry and filled with tomato, onion and basil. I found a similar recipe that was quite simple and tried it. 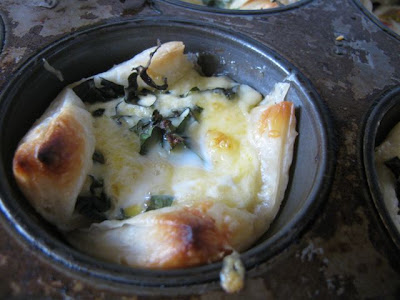 E and I loved these. Sylvia had a little but was not overly keen, though might like them more if I tried them again. She is very wary of food that is too hot and can be found with her face almost in her dinner blowing on it to cool it. Though her judgment of what is hot can be a bit off the mark. She has been known to tell me food is hot when it is almost cold. She also knows to say it is "a bit warm", which means it is just right.

I have found that I can get caught up in trialling new foods for Sylvia, only to find that I neglect to make anything else for us and what she eats can be on the light side for us if there is no side dish. As with the geegaw cups, these would be easy and delicious for entertaining adults. 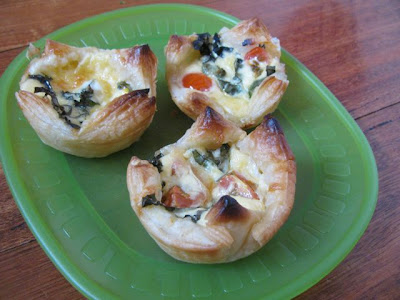 My next experiment was for the child care Christmas party. I thought some fritters would be good and had been meaning to try AOF's fritters. I tried them with carrot, for a bit of extra vegetable, and curry because Sylvia loves it. Would she try them? No! Nevermind, I enjoyed them, though the colour was more glaringly orange than I had expected. 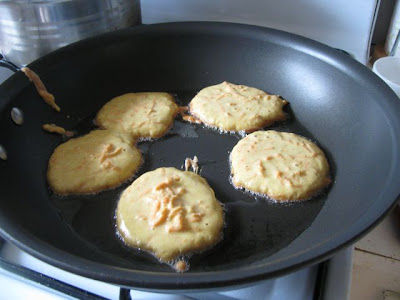 I was taking them to a gathering so others also enjoyed them. Child care parties are overwhelming with all the unknown kids and parents. Sylvia clung to me and didn't eat much at the party. She was more impressed with the fruit and some oaty gingerbread stars than with the savoury food. Most amusing was when Santa Claus made his entrance and Sylvia went the other direction towards the play equipment. She had a lovely time playing while the other kids crowded around Santa. 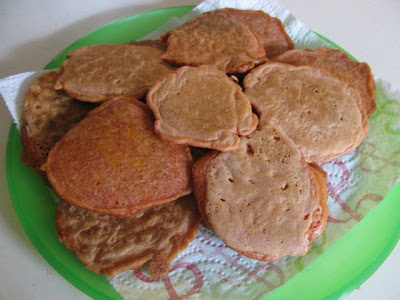 One disadvantage of Sylvia's preference for plain food is that there is nowhere to hide food. I always remember the story of a friend of a friend who loved his mum's gravy and then one day he watched her making it and found she blended lots of vegies into it. Lately Sylvia has been a bit more interested in tomato sauce with pasta but she doesn't seem to like bits in it. I never thought I would join the blending club, but, to my surprise, I found myself pureeing some tomato sauce for Sylvia last week. 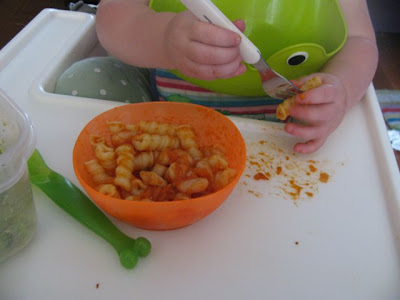 She enjoyed it. It probably helped that the meal combined two of her loves: pasta and forks. She loves feeding herself with a fork, though as you can see above, she is still a novice. I had to help her put her pasta on a fork. Mind you, I have to wait to be asked or the meal can turn ugly! I thought she might like some beans in it because she is back into baked beans (a food she loves and then suddenly wont eat for a while and, if we keep offering it, she will eventually come back to - we have had a few cycles of love and hate). But the beans in tomato sauce were ignored while the pasta was shoved in her mouth. I was pleased that we could have the same meal as her (yes she also had steamed broccoli). 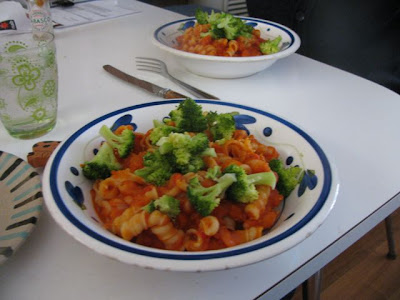 So there is hope that Sylvia might start to eat more of the food that we do. She also likes veggie sausages and potato, which we have quite often now. In the past week she has also had some of the rice noodles and seasoned tofu in fried ginger rice noodles and some seasoned sushi rice (recipe for a salad coming soon).

She continues to want a "cuggle" (that's a cross between a cuddle and a snuggle) in the middle of a meal and ask for fruit bun or bikkies, though she still loves nectarines, grapes, pineapple, cherries and, to my relief, knows to spit out the stones. Over the past couple of weeks I have had a few lunches out with my mum where Sylvia has delighted in eating chippies. 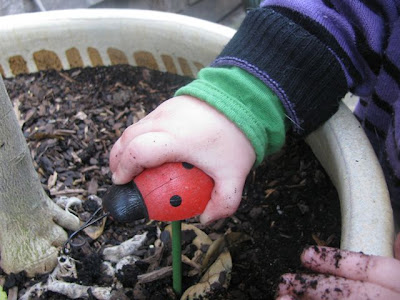 Sylvia is so full of life and laughter. She is talking a lot more now, though words like blanket, bottom and butter can all sound the same. One of her little snippets of conversation that amused me the most recently was one night when she didn't want to sleep. She told me "daddy hungry ... daddy chippies". I am not sure if she was telling me E wanted crisps or that he had been eating them but it alerted me to be careful what I say and do. She is watching and will very soon be telling. Hopefully, this will include telling me what lovely food I am making her.

By the way, you might have noticed that there is a new black cat in my right hand margin. This has been put there especially for Sylvia who likes to bother me while I am on the laptop. It works well as now she asks to see pussy cat and gets great amusement from it.

I am sending the kiddie vegie bolognaise to Claire at Chez Cayenne for Presto Pasta Night #196, the pasta blog event that was founded by Ruth of Once Upon a Feast.

Previously on Green Gourmet Giraffe:
This time last year: Vegetarian San Choy Bau
This time two years ago: Miso Soup for after the feasting!
This time three years ago: My Cookbook List

Sprinkle grated cheese in each lined muffin hole. Use scissors to chop a little basil in each and then arrange a couple of quarters of tomatoes in each. Mix egg and milk in a mug with a fork. Use a spoon to distribute this mixture between each muffin hole.

Bake mini quiches at 230 C for about 20 minutes or until they look golden brown and filling is cooked. Sit for a few minutes and then gently remove from muffin cups with the help of a knife. Eat warm.

Geegaw cups
from Recipes Plus, Dec 2010

Spray geegaw wrappers with oil and place in mini muffin cups. Bake at 200 C for about 15 minutes or until cups are golden brown. Fill with steamed vegetables or marinated tofu.

Place the dry ingredients in a large bowl. Stir in the eggs and soda water and mix til your have a smooth batter. Add grated carrot. Sit for about 30 minutes. Heat a frypan and add a little oil. Make fritters by dropping about 2 dessertspoons into a pile and using the back of the spoon to guide it into a neat circle. Cook about 2-3 minutes each side on medium heat – watch for bubble to show they are cooking. I made about 15 fritters, cooking about 5 at a time.

Cook onion, carrot and red pepper in oil for about 10-15 minutes. Add garlic and stir for about a minute. Add passata, water, promite, mustard and vinegar. Bring to the boil and simmer for 10-20 minutes. Meanwhile cook pasta according to packet (about 10 minutes). When vegies in the tomato sauce are soft, turn off the heat and puree. Stir in beans and heat through. Stir in cooked and drained pasta.

To serve Sylvia (our toddler) I set aside some cold beans and stirred through a couple of spoonfuls of tomato sauce, placed this in the freezer while the rest of the beans heat through. Then I rinsed her pasta under cold water to cool it down before mixing with the cooled tomato sauce and beans. We all ate our pasta with some grated cheese and steamed broccoli.

On the Stereo:
Atlantic Crossing: Rod Stewart
Posted by Johanna GGG at 22:04