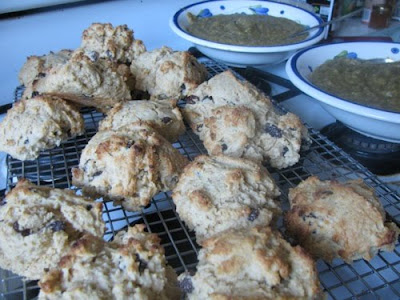 On my recent pouring over cookbooks for the cookbook challenge, I found the very recipe to make for the January Breakfast Club event. The theme is yoghurt so I decided to make Mollie Katzen's Yoghurt Scones. I expect the scones to be all about yoghurt. However I should have taken into account that this is an American recipe and if there is one thing blogging has taught me, it is that in Australia we bake scones differently to our American friends. 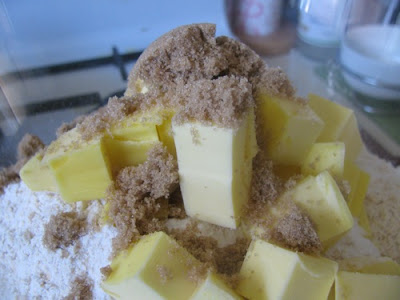 I will confess that I don't read American recipes so well. I looked at 6 tablespoons of butter and it didn't seem a lot. When I converted it to about 170g butter, that seem a truckload! Tablespoons seemed an odd way to measure butter until I found a change comment on a blog. Apparently Americans have tablespoons marked on their butter packaging but we don't.

Australian scones are far plainer than the rich ones made by Americans. Ours are mostly flour with just a little butter and milk. (Or a little cream and lemonade if we want to be fancy.) American scones are full of butter and eggs. More like a cross between one of our cakes and a scone. Their dough is far softer and not often patted out and cut into shapes like we often do. (I wont go into the scone vs biscuit terminlogy as I have already written about it before.) 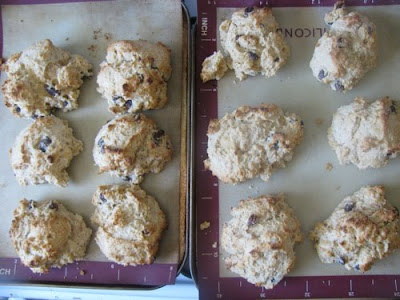 These scones were not cut in wedges like many American scones I have come across. Instead they were dropped on the tray in spoonfuls. (They were also meant to be glazed but the batter was so soft this would have been difficult. I accidentally put the egg for glazing in the dough by mistake, despite reading the recipe first!) It suited me to spoon the batter onto the tray. I had meant to bake while Sylvia slept but she decided on a short daytime nap. Instead we sat on the kitchen floor and she watched and even had a stir. I was glad there was no rolling out of dough involved.

When the scones came out of the oven, Sylvia was delighted. I left the scones on a rack to cool. Sylvia took this as an invitation to help herself. I forget how much she is growing. Now she can reach parts of the kitchen that were hitherto to far away. Every now and again I see the little hands reach up to the bench and feel for whatever goodies (or knifes or plates or whatever) can be found. 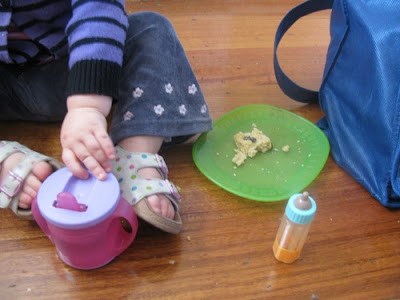 I will take a quick diversion and illustrate how Sylvia feels anything is hers by right. This week we went to the bakery and I sat her on the counter to stop her running out the door. She grabbed a bread roll from a basket, nibbled it and put it back. I paid for it and had it for lunch the next day. I also caught her taking money from my purse as she loves to do. When I remonstrated, she held up her hand and said "stop"! Now I am not sure that is why they taught her to be assertive at her child care centre! I can't help but think this hilarious story could so easily be about Sylvia. (Thanks for the link, Penny.)

Petty complaints aside, I am always happy when Sylvia embraces my cooking. I just wish she wouldn't embrace it until it falls apart in a shower of crumbs. Never mind, she ate enough to enjoy some of the scones.

E and I also enjoyed the scones. We ate them for dinner served with a soup. I am not going to write a recipe because I have too many of these soup recipes on my blog where I just chuck everything in a pot, boil and blend. But I will give you a list of ingredients to give you an idea of the soup: onion, spinach, potato, cabbage, cauliflower, broccoli, zucchini, carrot, celery, rice, brown lentils, stock, salt, smoked paprika, cumin, ginger. It was inspired by the Gluten-Free Goddess' Detox Soup but was actually nothing like it. Maybe another time I will stick to the recipe.

We ate scones for breakfast the next day and they were even better because they weren't so light that they would fall apart as soon as you looked at them. Delicious with peanut butter and I am sure a slick of jam would go very nicely too. Hence I am sending this to Sarah of Maison Cupcakes for the Breakfast Club which focuses on yoghurt this month. This blogging event is run by Helen from Fuss Free Flavours and Sarah from Fingers and Toes.

Previously on Green Gourmet Giraffe:
This time last year: PPN Baby pasta and adult stew
This time two years ago: Apricot History and a Chutney
This time three years ago: In Praise of Cookbooks

Mix dry ingredients in a large bowl and rub in butter and sugar. Lightly whisk yoghurt and eggs together (you can use 1 egg here and 1 for glaze or put both eggs in the mixture). Stir eggs and yoghurt and sultanas into dry ingredients until only just combined. Drop heaped dessertspoonfuls onto a greased or lined tray and bake at 200 C for 10-12 minutes or until golden brown. Cool on a wire rack.

On the Stereo:
Live at the Royal Albert Hall: Tiny Tim
Posted by Johanna GGG at 12:46