Chocolate cake - the way mum made it 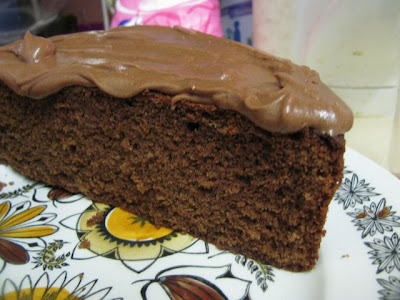 To think about this cake takes me back to my childhood kitchen with the the old electric oven (I still remember my mum's excitement at moving to a house with a gas oven when I was a teenager - she told me that I could bake anytime I wanted because I wouldn't have to preheat the oven!), the sink where I washed and dried so many dishes, and the pantry with the louvered wooden doors. 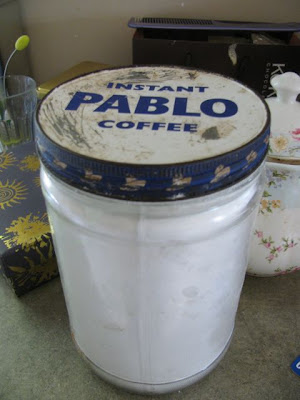 The pantry was big enough to hide inside if we were playing hide-and-seek. It was a great place to hide because you could see a little of what was going on outside the door through the louvres. Or sometimes we climbed the shelves in search of food or other goodies - I am not sure if the shelves were sturdy or it was just that we were too light to bother them. The shelves were always full. My mum tried to put food in containers and used all manner of odd tins and jars. Above is the large coffee jar I remember from my childhood that she still uses to store icing sugar. (The lid is so battered that it is a challenge to screw it on.) 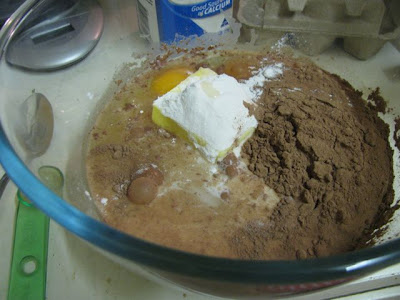 The recipe is an easy one. The ingredients would always be in my mum's kitchen. Dump them in a bowl and mix with electric beaters. Sounds simple, and yet during this process something magical happens to turn the ingredients into a creamy chocolate batter. I still remember visiting family friends and being amazed at how light and gorgeous their cake was. Mrs D gave us her secret. She beat the mixture for a whole 3 minutes. Ever since, I have done the same. It makes a difference, I swear! 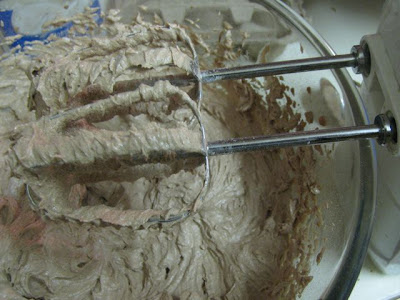 And when the beaters were turned off, what child could resist a taste! Not while they were whirring faster than the eye could see. I was a little scared of them when they were on. I had visions of blood splattering, cartoon style, from fingers that ventured too close. A bit like I would never even touch the oleander bush after being told it was poisonous because I feared that instant death would come to anyone who so much as brushed against it. But I digress!

With many brothers and sisters in my house, there was often a fight over who "cleaned" the beaters and got to lick the bowl. Kids love raw cake batter. They have no horror of raw egg nor calories. I was told that a friend of a friend once made a whole bowl of cake mix with her sister just to eat it raw. They never ate it raw again. I have a friend who has a rubber spatula especially for scrapping the bowl and sampling it once the cake is in the oven. Cake mixture to children is a wondrous thing. Why adults must save it until it was baked and cooled, was a mystery to me as a child. 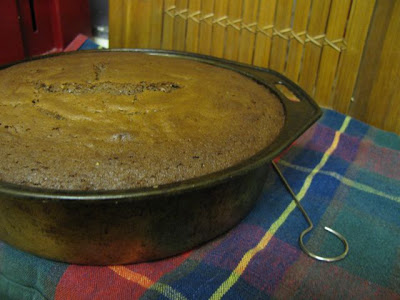 But I am getting ahead of myself. Next the batter was tipped into a round 20cm cake tin. This was our standard cake tin (along with a lamington tin) in my childhood. It was probably the first cake tin I bought when I moved out of home because I thought every home must have one. No fancy springform.

We always greased the tin with butter, usually with fingers but sometimes when a packet of butter had been finished, the paper was used to grease the tin with the butter remaining on the wrapper. I now use baking paper and oil spray, just as I use a skewer to check if the cake is done instead of a butter knife like my mum did. 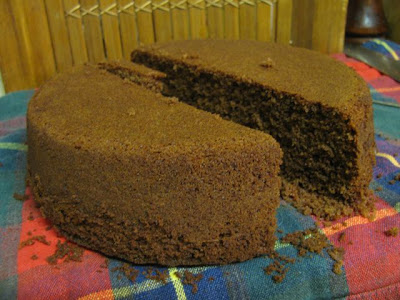 Yes, I don't quite bake cakes the way my mum used to. Nor do I eat them the same way. My mum always insisted that the cake was cooled and iced before we ate a piece. I would beg for a warm piece but she had more self control. The photo above shows that I didn't wait to ice the cake. But I did cut it like my mum. She would cut a thin slice of cake along the middle and then cut this slice into smaller pieces. Then she would put the remaining halves of cake in a plastic container and push them against each other.

I am not so interested in icing but made some for the sake of nostalgia and because E loves it. There was never a recipe for icing in my childhood. Just some icing sugar in a mug, a spoonful of butter and as much hot water as was needed. To make chocolate icing, I added a spoonful of cocoa. Sometimes I had to add a little more water and then more icing sugar to get the right consistency. I still often make icing this way. 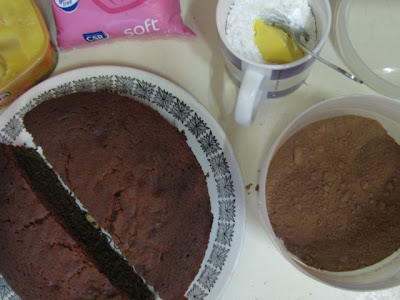 But I did need a recipe for chocolate cake and when I moved out of home, it was one of the first recipes I asked my mum to give me. She didn't turn to a cookbook or her notes. This recipe was in her head. I wrote it down.

Given the sentimental nature of this post, you wont be surprised to hear that I photographed the cake on the plate from my childhood. Well, it is not exactly the plate from my childhood. I am not sure what happened to them. But when I lived in Scotland, we were visiting my parents in law in Peebles one day. As we were driving down the high street, I saw that pattern on a plate in the window. We stopped the car and I bought a couple of plates from the charity shop. These plates were a great comfort to me while I was living far from home.

This cake is also a comfort. No longer my only chocolate cake nor even my favourite chocolate cake but it tastes as happy as licking the beaters and hiding in the pantry and my mum's warm hug. E enjoyed the cake because he likes icing but it is not home for him like it is for me.

I am sending this to Tamanna of The Dazzling Kitchen who is holding a Comfort Food Event. The theme is winter, but although it is our summer, I thought I would send this to her because chocolate cake is so perfect for winter comfort.

Previously on Green Gourmet Giraffe:
This time last year: Tetris, the Foolish Hedgehog and Brunch
This time two years ago: Curry traditions – of sausages and potatoes
This time three years ago: GF delights and fairy bites

Chocolate cake
From my mum

Grease and line a 20cm round cake tin. (When I was young I just used my fingers to smear butter over the inside of the tin. Now I usually cut out a circular piece of baking paper to line to bottom of the tin and spray the sides with oil.) Place all ingredients in a large bowl and beat for 3 minutes with the electric beaters until the mixture becomes lighter and creamy. Tip into prepared tin and bake at 180 C for 40-50 minutes or until a skewer inserted in the middle comes out cleanly. Cool and ice with chocolate icing, if desired. Ours lasted almost a week.