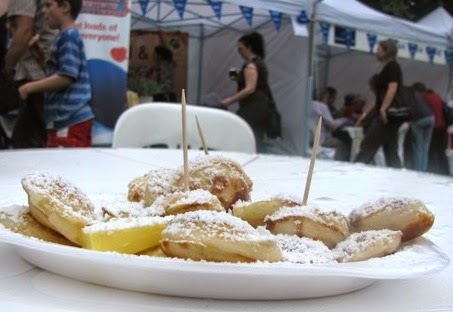 Today is Australia Day so we headed into Kings Domain, a park on the fringe of the city, and joined in some of the fun. A nice excuse for a day out. There was a vintage car display and everywhere we looked seemed to be yet more old cars. Around the cars were lots of activities. However E had one aim when we arrived. Coffee and morning tea. 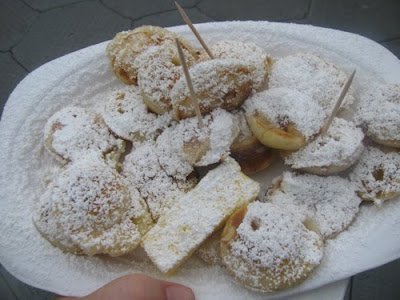 We shared a plate of poffertjes. These are mini-pancakes from the Netherlands that seem to be served at all events where there is a cluster of food vans. We haven't had them for ages. Normally I would have lemon juice or maple syrup on them but we had just sugar and butter so Sylvia could have some. It was Sylvia's first taste and she ate a few. She was fascinated by the toothpicks in them that are for those who don't want to get their fingers dirty. 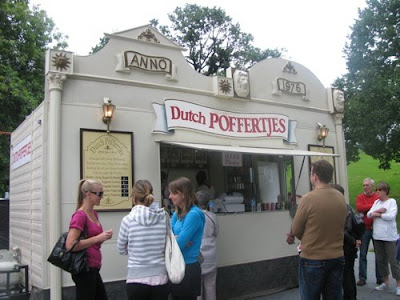 I was fascinated by the poffertjes stall which is trying to get away from tacky greasy fast food van. It aims to look like an historic structure rather than a caravan that is here today and gone tomorrow. I also noticed some green cast iron decoration on the coffee stall. Curious!

You might say that Dutch pancakes are not particularly Australia for our national day. I ate from Dutch, Italian, American and Indian cuisines today. You can't get more Australian that that. If I had seen the scones first I might have had those instead of poffertjes but I had no desire for anything from the yabby stall. We ate pizza for lunch but it was forgettable apart from that Sylvia enjoyed the margherita. 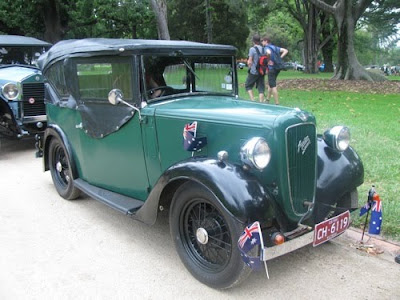 We enjoyed viewing the cars. Some seemed out of the history books and other just seemed to jump out of our personal history. There were lots of activities but we didn't have time for any. I did enjoy looking around as we pushed the stroller along the paths. Everywhere was something interesting - baby animals, alpacas, tai chi, table tennis, boules, trampoline, kiddie soccer, bird house making, boomerang decoration, enjoyed just wandering around and watching rather than We also enjoyed seeing the baby animals, the alpacas, hari krishnas dancing, the parade and a fire brigade display to name a few. 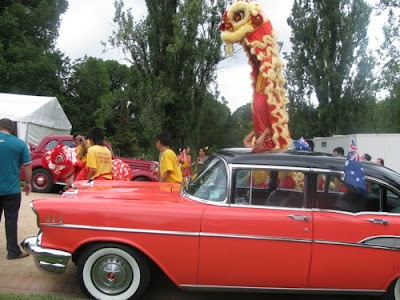 We even saw some of the parade with all sorts of nationalities and communities represented, including jedi warriors! I love the above photo because it looks like the Chinese dragon is driving the vintage car. It is good to see so many cultures embraced in on Australia Day.

However most of all on this day, we must remember the Aboriginal and Torres Strait Islander people of Australia whose invasion and colonisation began 222 years ago. I heard Oodgeroo Noonuccal (formerly known as Kath Walker)'s poem "Civilisation" on the radio this morning. It spoke eloquently to me about how those already living in Australia saw the Europeans who came on 26 January 1988. If I could find it on the web I would share a few lines. In lieu of this, I will leave you with the opening stanza of her poem "No More Boomerang". I must seek out her poetry and encourage you to do likewise.

"No more boomerang
No more spear;
Now all civilised —
Colour bar and beer..."
Posted by Johanna GGG at 21:59