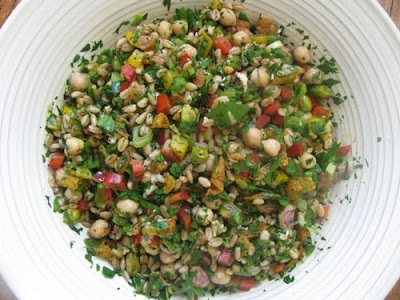 I have been finding inspiration in Joanne's reflections in the Eat Live Be series. Lots of healthy ideas and recipes. So, in the spirit of healthy eating, when my friend Will was coming over to lunch on Saturday, I decided to make Joanne's Morroccan Chickpea Barley Salad. As I started cooking the barley I had vague recollections of Will talking about pearl barley. I feared that he might hate it but it was too late to back out. 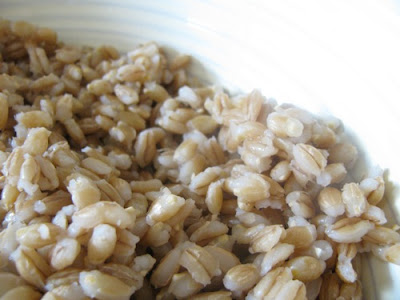 While I have had barley in stews and soups before, I have never used it in salad. Would it taste different in a salad? It turned out that Will loves barley. And chickpeas. He was delighted with the salad. I gave some of the cooked barley to Sylvia and she loved it. What is it about kids and carbs! 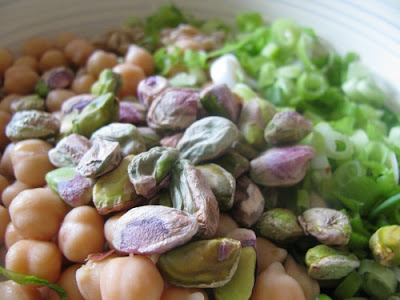 I bought the barley at the Vic Market. Back home I found that I didn't have as much as the recipe required. I didn't mind as I don't like salads that are dominated by grains. I was also pleased that it had dried apricots and pistachios. I love dried apricots and so does Sylvia. I haven't had pistachios for ages and ages. The salad was a welcome excuse to have them in the house. I had forgotten just how pretty they are. 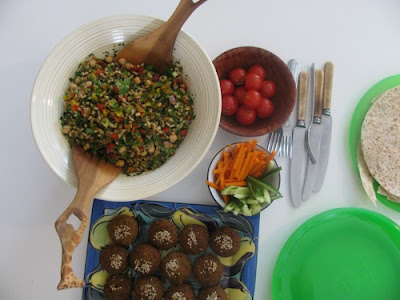 Sylvia had her swimming lesson before lunch so I simmered the barley before we left and bought Half Moon falafels on the way home. In the mall while we waited for falafels to cook we watched the old busker with the didgeridoo. Sylvia refused to give him the coin I gave her to drop on his pile. I chopped some vegetables. I dug out some wraps that fell apart. I brought the yoghurt and beetroot dip out of the fridge. It was a great lunch. Will was impressed. 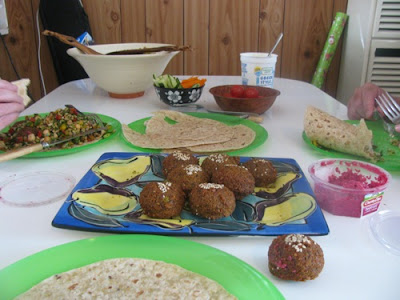 I used some of my Australian spice mix instead of the Moroccan spice mix. I am not sure I got the spices quite right. I found it a little lemony for my liking. There were so many wonderful flavours and textures from the other ingredients that I didn't mind. If I was a different sort of blogger I might try lots of different dressing variations. But I don't. I am posting how I made it anyway. 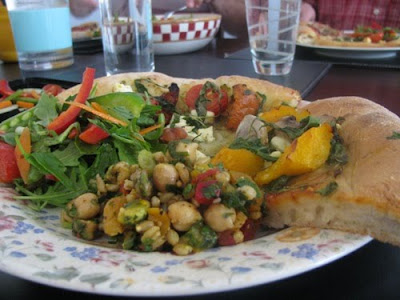 We had leftovers the following day when we were headed over to see Chris, Yav and Florence for lunch. I had said I would take along some salad. So I took the leftovers. I also chopped up lots of veg and made an orange dressing. The barley salad had dried up a little overnight so I poured a smidge of orange dressing on the salad. It worked well. Maybe I would prefer orange juice rather than lemon on the barley salad. Maybe I shall experiment further some time.

As an aside, the salads went well with the pizza that Yav baked. The pizza was a big hit. Even Sylvia loved it. I have been inspired to make pizza last night. Sylvia loved it too. Might need to be a more regular meal.

'Moroccan' Chickpea Barley Salad
Serves 4 as a main, 6-8 as a side, adapted from Simply Recipes via Eats Well with Others

Boil barley in salted water (using about 1 tsp of salt) for 30-60 minutes - I did it for about 50 minutes - until cooked. Drain and lightly rinse. Cool ( as I did or you can serve the salad with warm barley). Add remaining ingredients and mix. Best eaten on the day of preparation but can be eaten the next day - may need a little extra juice or dressing.