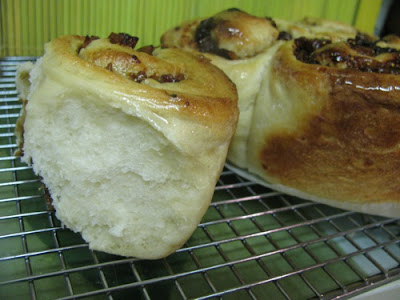 I know the year has well and truly begun when I feel like there was never a holiday from work, I am starting to write the correct year (2011 not 2010), my blog reader is filling with posts quicker than I have time to read them and the Christmas food has almost disappeared from my kitchen. Almost but not quite. I still have a few fruit mince muffins in my freezer.

The fig and walnut fruit mince was among the last of the Christmas baking to go. I had quite a lot leftover from my panforte and didn't fancy making mince tarts. So it sat in the fridge for a few weeks until I checked it was still viable - given that it used banana which doesn't keep so well. I was reminded of it when I saw a link to Chele's Mincemeat and Apple Tart. We had no apples in the house but I remembered C's Mincemeat Swirls with Lemon Icing. 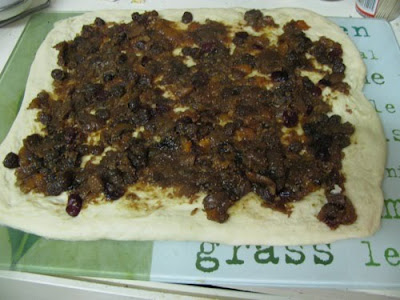 It is ages since I have baked with yeast and normally I would not do so in the middle of summer. I also should have done lots of baking while I had my Christmas break. Yet there was not enough sun, too much food about to justify it and I was too busy relaxing. It was only on my first day back at work when free time seemed precious again that I baked these

I got home to a big cuddle from Sylvia and a chat about the day with E. We had bangers and mash, a favourite meal of ours, especially given that we have had a lot of grey cool days this summer. I put a little leftover cheese and baked beans into the mashed potato. Waste not, want not! But really I tell you this because I then decided that rather than scald milk as C had done for her dough, I would use my favourite potato bread recipe from Nigella. 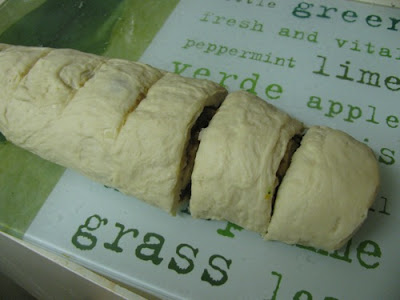 I have read and admired a lot about Dan Lepard on C's Cake Crumbs and Cooking blog. I decided to use his method that C described. It involved kneading for 10 seconds at regular intervals three times in 30 minutes. It was only after I had added all the flour that I read it should be a very soft dough. In retrospect I would have used a bit less flour but I was happy that I was able to use up leftover mash that wasn't too strongly flavoured despite its odd ingredients for a sweet dough. 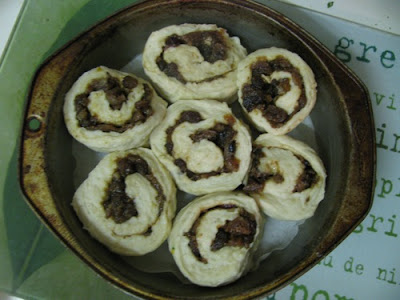 You can see in the above and below photo that the dough didn't seem to increase a lot in the second rise but the resulting scrolls were soft and pleasing. When I have baked bread I have sometimes found that it helps to turn it upside down at the end to brown the bottoms (maybe it is my old oven) and I think it would have helped with these scrolls but I thought of it too late. 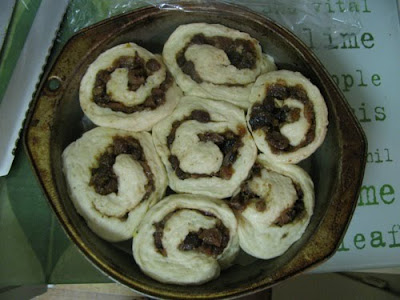 The other change I made was to omit the lemon icing that C used. I am not a huge fan of lemon or icing. Instead I used the glaze that I use for hot cross buns. The fruit mince and the glaze gave all the sweetness I needed. 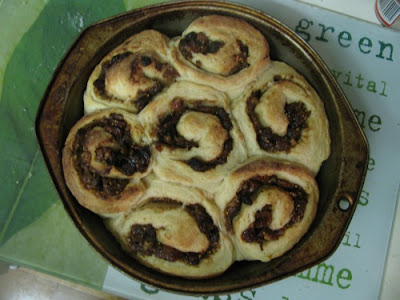 It is a great achievement to try these scrolls. When I was young I loved coffee scrolls - iced yeasted scrolls of bread with a smattering of spice and no coffee. I also remember enjoying the buttery sweet scrolls at Saint Cinnamon when I was studying in the city many years ago. Since starting blogging I have come across a few tempting scrolls, especially these pumpkin cinnamon scrolls and these nutella walnut and orange scrolls, but they seem terribly indulgent and a lot of work.

I love this recipe for not having the butter and sugar that most scrolls have. My fruit mince is home made and has no added fat or butter and no added sugar so it makes the scrolls even more virtuous. I think I preferred these to mince pies. Though I am not sure E did. Sylvia is constantly asking for fruit buns but she seemed to prefer her fruit mince in a pie as well. Not that I was complaining about more for me. They made wonderful breakfasts and work snacks. 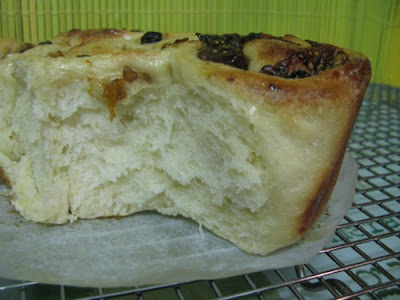 With yet more leftover fruit mince and yet more cool baking weather, I then turned my attention to Haalo's Fruit Mince Muffins. It was such a lovely simple recipe and I was spurred on by my concern that the fruit mince would go off and waste all the lovely dried fruit. I substituted mixed spice for cinnamon and the smell just made me feel like it was Christmas all over again.

They were wonderful muffins even with a bit of wholemeal flour and a bit less fruit mince than the recipe specified. E was not keen on these but Sylvia has enjoyed them. I still have some in the freezer for lunches. Another great alternative to mince pies. 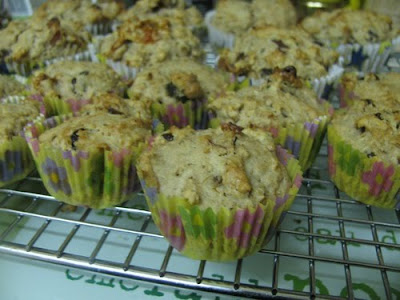 I am sending the scrolls to Susan at Yeastspotting, the weekly blog event rounding up all the yeasty baking in the blogosphere.

Previously on Green Gourmet Giraffe:
This time last year: In search of . . .
This time two years ago: Birthday chocolate cake and crazy computers
This time three years ago: Raspberry Vinegar for Dummies

Fruit Mince Scrolls
adapted from here and Cake Crumbs and Cooking
Glaze:
Mix the mashed potato, flour, salt, yeast, golden syrup and water until you have a soft dough. Knead for 10 seconds on a lightly greased board. Cover and rest for 10 minutes. Repeat knead and rest and then knead for a third time. Cover and rest another 30 minutes or until the dough has grown by 50 - 100%. (Closer to 100 than 50 is better.)

On a lightly greased board, use hands to press the dough into a rectangle of 30 x 20 cm (ie about the size of a swiss roll/lamington/jelly roll tin). Spread the fruit mince over the dough leaving a small border (I think I left too much of a border on the shorter sides). Roll up into a log with the longest side facing you. Cut the log into seven pieces using a sharp knife.

Arrange pieces in a greased 20cm round tin. Rest for approx 30-60 minutes until scrolls are very snug in the cake tin (I think I left mine for 45 minutes). Preheat oven to 200 C while the scrolls rest.

Bake scrolls for 25-35 minutes until the tops are browned and the scrolls sound hollow when tapped. (I baked mine for 30 minutes. If I did it again I would bake it for another 5-10 minutes upside down so that the bottom was browned.

When the scrolls are 5 minutes off coming out of the oven, make the glaze by simmering the ingredients in a small saucepan for about 2 minutes. When scrolls are hot out of the oven brush with glaze. Delicious warm and they lasted about 2-3 days in my house but were not so great by the 3rd day.

Fruit Mince Muffins
adapted from Cook (Almost) Anything
makes 12 regular muffins and 11 mini muffins
Preheat oven to 180 C and line muffin pan(s) with paper cases. Place the dry ingredients in a bowl and mix in the fruit mince, breaking up any clumps with your spoon. Lightly whisk the egg, milk and melted butter with a fork in a small bowl or large jug. Add to the flour mixture and stir until just combined. Spoon into muffin cases and bake for 20-25 minutes or until golden brown and a skewer inserted in a muffin comes out clean. Cool on a wire rack. Can be frozen.

On the Stereo:
An Autumn Almanac: 15 songs in the spirit of Ray Davies (Uncut Magazine freebie): Various artists
Posted by Johanna GGG at 20:27