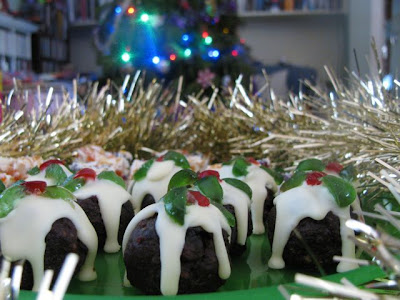 Tomorrow is the Epiphany, the day that celebrates when the wise men visited Baby Jesus. It is the twelfth day of Christmas when the tree and decorations come down. So there is time to squeeze in one last Christmas post with all the reflections on puddings - both Heston's and mine - and a few extra goodies I made out of Christmas leftovers. 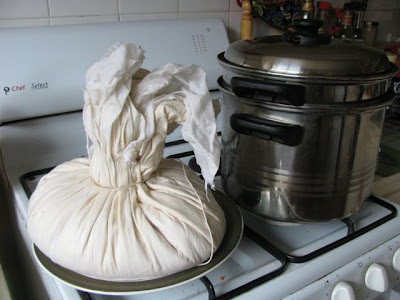 I was making my Christmas pudding before I had heard all the hoo-hah about Heston's. This is my fourth year of making it and I still have problems. My problems are not mouldiness (though by the searches on my blog stats you would think so) but getting a nice crust on the pudding.

So this year I went overboard on flouring my pudding cloth. I also didn't leave the pudding to hang as long after boiling it as I did last time. Instead of leaving it overnight to dry onto the cloth, I left it just an hour or two so the cloth was still moist but not dripping wet. Then I gently peeled it off and had what you see in the below photo. Not a pretty sight but I was excited to have most of the floury crust still on the pudding. This is the bit that gets all leathery and soaks up the flavour of the pudding and is delicious. It also forms a protective shell while the pudding waits for Christmas. 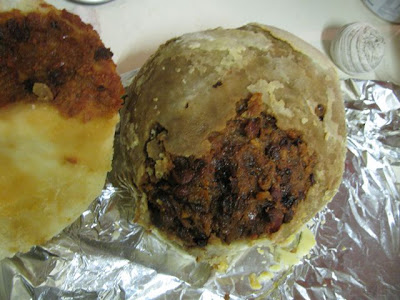 I made my pudding about 4 weeks prior to Christmas day and kept it wrapped in foil in the fridge. Not traditional but I am don't have a cool room to hang it in the cloth and I am paranoid about hot summer days. (And my mum tells me to do it this way!) As usual the pudding tasted rich and fruity and scrumptious but the crust was a problem.

You can see in the picture below that the crust was a monster. It was actually ok on the bottom but the flour seemed to all gathered at the top and was just like a mouthful of flour and water - yucky - because there was too much to soak up the wonderful pudding flavours. Next year I will exercise more self-control with flouring the cloth. 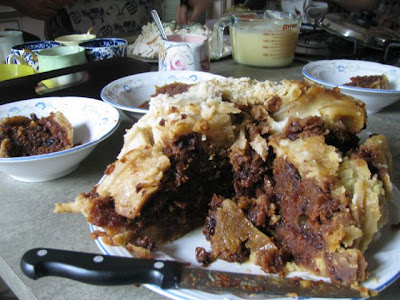 Far prettier than mine, but no photos, was Heston Blumenthal's famous Christmas pudding with the candied orange hidden inside it. It sold for £13.99 at Waitrose supermarkets and when it sold out, was selling at outrageous prices on EBay. Soon, there were failed attempts, recipes, and video demonstrations. Even Aussie blogger, Haalo, had a go at making Heston's pudding. The Brits love a good pudding! If you want to know more, read this article in the Guardian about the history and rituals of the Christmas pudding. 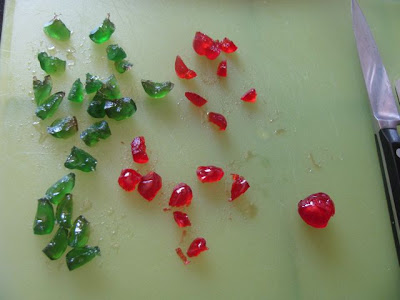 Or if Christmas pudding is not your thing, you may like to follow Cindy's example and make Christmas pudding bites. I was lucky enough to taste these at Lisa's potluck and they were delicious. Cindy used vegan gluten free ginger biscuits instead of sponge cake and I loved the idea but thought maybe gingerbread would also work in these little truffles.

On New Year's Eve, I looked at all the sweet food in the house and decided to make truffles out of some gingerbread my mum had given me. We didn't need a jot more sugar but the gingerbread was not getting the attention it should among the pudding and panforte and mince tarts etc etc. I made a few other substitutions. The truffles were delicious but a little sweet, possible because I used dark choc chips rather than good dark chocolate. (In fact I might try them again with gingernut biscuits for a bit more texture.) I was pleased that I was able to make the truffles out of food leftover from all my Christmas baking. Well almost...

I didn't have any white chocolate in the house for the cute topping that made the truffles look like mini-puddings. On the weekend we had an excursion to stately home, Ripponlea, and bought a packet of white choc chips en route. It seemed a good idea! 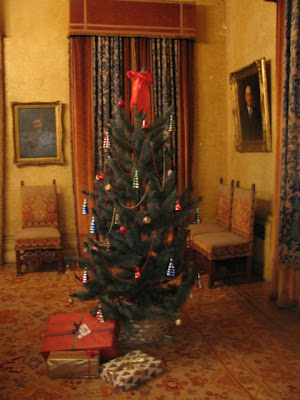 We had a lovely afternoon eating a motley picnic (cheeseymite scroll while sitting on the waterproof cover of the stroller, anyone?), doing a tour of the mansion and strolling around the gardens. It was a bonus that the Christmas decorations were still up in the house. Sylvia was very excited about the Christmas trees (or "kiss-tee" as she calls it) and dumbfounded at the stockings hanging from the mantlepiece.

The day was warmer than I had expected and the car was hot when we returned to it. The packet of white choc chips had become a packet of melted chocolate. So I got home and duly drizzled white chocolate over my truffles. Trial and error proved to me that a bit of oil in the white chocolate made a smoother drizzle. Then I had to find a white chocolate recipe pronto so the rest of the packet didn't go to waste. 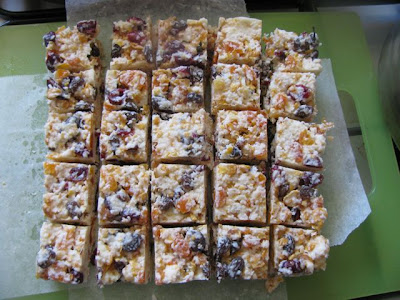 Fortunately Katie Carrot had posted her Vegan White Christmas recipe recently. White Christmas is something that takes me back to my childhood and makes me feel all nostalgic. Traditional recipes (such as this one) use lots of copha, powdered milk and icing sugar. This combination makes me shudder in horror and my pantry just doesn't have room for the useless remains of a packet of powdered milk.

I was intrigued by Katie's use of white chocolate instead of these three ingredients. I rarely eat white chocolate as it is too sweet but here I was with a surplus (albeit not vegan) and a recipe. So I scrounged in the pantry which was still full of dried fruit from Christmas baking. I substituted corn flakes for rice bubbles because we just don't have the latter even though I would prefer them. My one mistake was my concern that I didn't have quite enough white chocolate so I put the remains of my coconut oil in there and it just was far too dominant. Damn you, coconut oil!

Despite my problems, the White Christmas is still very edible. E says it is much nicer than the one from the supermarket that he ended up throwing out. Sylvia asks for a taste or grabs at it from the plate in the fridge at every opportunity. I have enjoyed it so much I am considering making another one with rice bubbles and no coconut oil next Christmas. 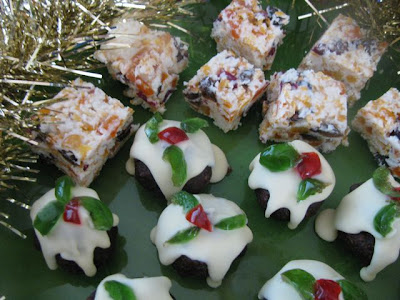 As this is my last Christmas post, I will have a quick whinge! Today I saw Australia Day signage in the supermarket. As I said at the start of the post, the traditional twelve days of Christmas is not even over. Before Christmas I heard advertisements advising people that the traditional day to put up the Christmas tree is 1 December (which is absolute commercial rubbish) and that there were 55 days of Christmas (also garbage). I hate the way that retailers want to bring Christmas into our lives earlier and earlier and take it out of our lives just as early, all for a bit of money! Rant over.

I am sending both these Christmas treats to Chele of Chocolate Teapot for the We Should Cocoa blog event that she runs with Choclette. This month the theme is leftovers, which fits this post as both these sweet bites would never have appeared in our house if not for leftovers.

Place sultanas, prunes, (sugar and jam, if you are using them) and juice in a small saucepan. Bring to the boil and cook gently for about 3 minutes until most of the liquid is absorbed and it looks a bit like fruit mince. Let cool slightly. (I didn’t let mine cool much). Stir in ground nuts, crumbled gingerbread and melted chocolate.

Use your fingers to shape teaspoonfuls into balls. I found the mixture quite soft and sticky and wet my fingers a few times to be able to work with the mixture. Place in the fridge to firm up.

Line a small tin with baking paper. (I did half of Katie's quantity so I used a square 15cm tin but Katie used a small slice tin.)

Measure out all ingredients before melting white chocolate (I advise this because my chocolate started to set before I had added all ingredients). Then melt white chocolate (either in a heatproof bowl over boiling water or in the microwave or by leaving it all afternoon in a hot car) and add all ingredients. Mix well and tip into prepared tin. Spread evenly and smooth with the back of a spoon. Refridgerate until set and then cut into small squares (it is quite rich). It keeps in the fridge at least a week.

On the stereo:
Scottish Pipes Collection (free CD from the Scotsman newspaper) Various Artists
Posted by Johanna GGG at 21:02