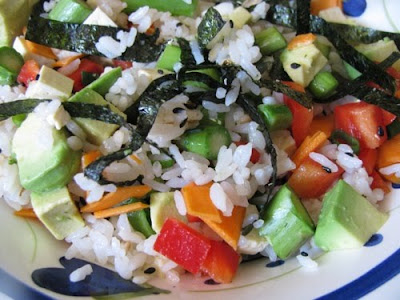 I was beginning to think I would never get this post up. It is not that I am considering close up the blog, or too busy to cook, or that the dish wasn't worth posting. It is my computer! For the past few weeks I have had problems with my computer hard drive being full.

This blog is partly to blame because it is the photos that have really created the problem. My biggest headache has been using iPhoto on my MacBook laptop. It is a mysterious program that "helps" to manage your photos but will not be managed itself. Some days I despair of all the automation that takes us further and further away from understanding computers. It makes 2001: a space odyssey seem more and more realistic. I am still grappling with it but a very helpful guy on the end of a support line and an external hard drive have shown me a light at the end of the tunnel. 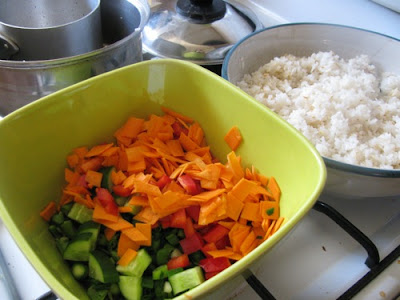 When it comes to computers and cooking, the latter makes far more sense to me. I understand how to chop vegetables and mix flavours. However, the kitchen also holds some mysteries for me. Sushi is one of these. I love to buy (vegetarian) sushi hand rolls when I am out and about but making it still intimidates me. I made it with a friend once but since then haven't dared.

Making sushi isn't top of my list of things to do but I have long wanted to try Susan's Sushi Salad. It is one of those brilliant ideas that has lingered in the back of my mind long after linking to it soon after starting my blog. Perhaps that is why I bought sushi rice some time ago. I was finally inspired to use it when Lisa and Jacqueline announced that this month's No Croutons Required vegetarian soup and salad event was focused on rice. I thought that I had made enough rice salads and lots of rice soups but then I remembered this sushi salad. 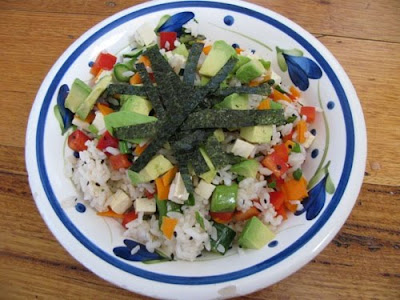 My main challenge was cooking the rice because I don't often use the absorption method. The packet said 20 minutes but after 15 minutes my rice was sticking to the bottom of the saucepan. I took it off the heat, left the lid on and set it aside for about 5-10 minutes and it was fine, albeit with a few crunchy bits from the bottom. Then it was just a matter of mixing in some chopped vegies and tofu. I got additional inspiration from this recipe. Despite my visions of elegantly thin nori strips, the ones I did (with scissors) were a bit more chunky than that. Once mixed into the salad they tasted great. 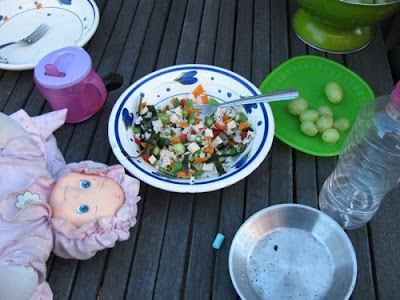 I had expected E to be a bit lukewarm about the salad but was pleased that he loved it as much as me. I made it last week on one of the few hot days we have had. When E got home it was a relief that it had become cooler outside than inside. We sat outside to eat the salad and Sylvia played in the yard. The balmy evening was so lovely that I was loathe to go inside and we were still relaxing outside beyond Sylvia's bedtime. 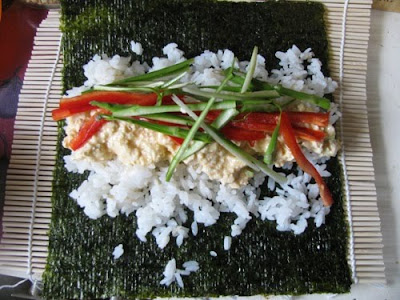 The salad was such a success that I couldn't resist trying making some sushi hand rolls, with the bamboo mat I had bought while buying the rest of the salad ingredients. After all, I wasn't quite sure what to do with the rest of the sushi rice. I tried it on the weekend while Sylvia was sleeping.

The sushi worked but was less impressive than my salad. I tried the avocado and peanuts and the spicy tofu filling from Cindy and Michael's sushi post. The fillings were tasty but I think I overfilled and so I found my sushi rolls were full to bursting. If I keep on trying it, I might post more about making sushi but for now I prefer the sushi salad, which is easier to make and has more vegies. 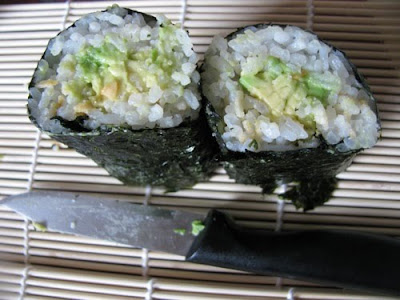 I had one more idea I needed to try with the sushi rice. Sylvia loves rice but when I gave her a heap of sushi rice on her plate she found that most of it stuck to her hands. She was frustrated. I was frustrated. Not a lot of rice made it to her mouth. I remembered going to our neighbours bbq and having Japanese rice cakes. 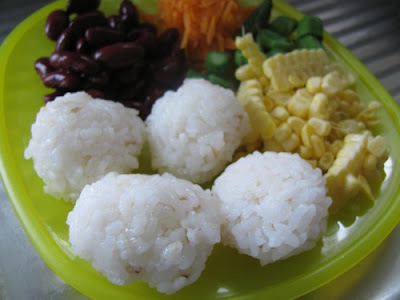 I searched the web and found information on how to make Japanese rice balls (and that they are called onigiri). Yesterday I tried making some simple balls by making sushi rice with some seasoning and wetting my hands to make balls. Sylvia loved them and found them much easier to eat. My only problem was that she wasn't that interested in the rest of her dinner and threw it over the side of the high chair. Sigh! Perhaps I will try putting some under the grill sometime as this was how we had them at the bbq and they were fantastic.

Sushi Rice Salad
serves about 2 adults and a toddler

Rinse rice and then place in saucepan with 1 and 1/4 cup of water. Bring to the boil (covered), then cover and very gently cook for about 15 minutes. Keep your nose alert - mine was starting to stick to the bottom and all water was absorbed after almost 15 minutes (despite the packet saying 20 minutes). I then left it in saucepan with lid on for another 5 minutes.

While rice is cooking, chop up tofu and vegetables into small dice, except carrot. Use a potato peeler to make thin ribbons of carrot and then chop into small pieces.

When rice is cooked, use a large shallow dish to spread it out. Mix with vinegar, sugar and salt. Go easy with these ingredients and taste to see how they go (rice vinegar is much sharper than cider vinegar so next time if just using rice vinegar I would use less). I did find that the rice needed to be more seasoned for the salad than it does for sushi and added a bit more vinegar once I had mixed up the salad. Let rice cool. This should take about 15-30 minutes for it to cool enough to put in the salad.

Mix cooled rice with sesame seeds, tofu and vegetables except avocado. Serve salad topped with chunks of avocado and thin strips of nori.

On the stereo:
With my Little Ukulele in my Hands: I'm the Ukulele Man: George Formby
Posted by Johanna GGG at 15:23