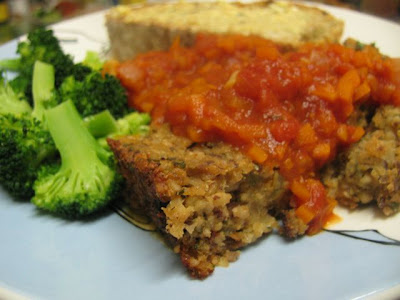 When Carla announced she was having a winter warmers vegan potluck, she didn’t specify that it was gluten free but, through her blog, her efforts to keep gluten out of her diet are on public record. Making a dish that was vegan, gluten free, wintery and portable was a challenge. So I decided to fall back on what I knew – the nutroast! 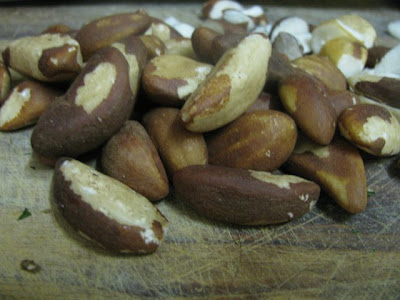 I make nut roasts regularly and decided to create my own for the occasion. I started off with a notion to use brown rice after enjoying my recent walnut and rice nutroast. I rarely use brazil nuts but have read somewhere (I wish I could remember where) of their health benefits. So having brown rice and brazil nuts, I needed something else starting with B and decided on broccoli because it is so excellent in burgers. I also consulted a brazil nut roast by Dhiviya and a gluten free nut roast by Ricki for extra inspiration. 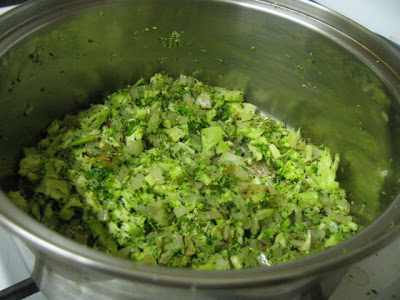 I made the nut roast a few days before the potluck. I had thought I might need a practice run but it made enough for two loaves and tasted good so I put one loaf in the freezer for the weekend. The one that we had at home was delicious with tomato sauce, steamed broccoli (because you can never have enough) and Nora Kinney’s s Irish Soda Bread from Eat Me Delicious. Sylvia even ate some nut roast but I suspect she was just desperately hungry after only eating watermelon all day at child care.

Even better was the next night when I mixed crumbled nut roast with the remaining tomato sauce and some pasta – it was a fantastic bolognaise. I didn’t quite follow a recipe for the tomato sauce but I just cooked onion and carrot in olive oil, added garlic, a tin of tomatoes, 2 tbsp tomato paste, a splash of balsamic vinegar, ½ tsp each salt and sugar and simmered it till it was slightly thickened and then pureed with a hand held blender. 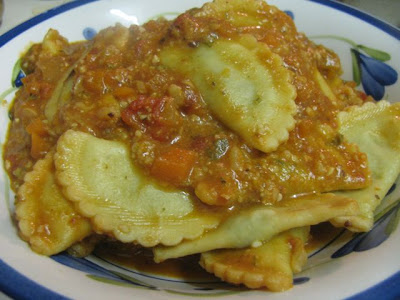 When the potluck came around, E was poorly so Sylvia and I set out to Carla’s with the nut roast, some tomato sauce and a batch of pumpkin brownies. My offerings seemed typical of the wintery food of the afternoon – nuts and chocolate.

As usual I seemed to miss fascinating dishes but enjoyed those that I tried. There were lots of nutty treats that I was drawn to including Vicki’s vegan gf sausage rolls, lentil pies and nutty burgers. I missed Toby’s lemon tricken and Steph’s soup. Admittedly I was also drawn to finger food because I was watching Sylvia the whole time. She just loves to overturn a plate or hurl a bowl as far as she can throw it. 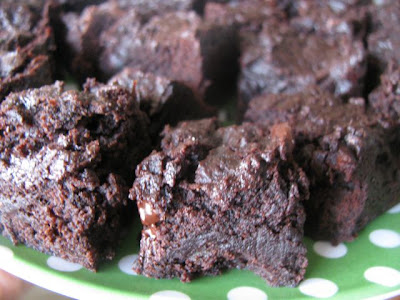 I didn’t take many food photos but I did manage to take a photo of the dessert table. I am most envious of Carla for her kitchen table that sits under a skylight which is wonderful for taking photos in natural light. Her wallpaper that I often see in her blog photos is also delightful.

But back to the food and all those wonderful chocolate desserts. Vicki’s peanut butter chocolate cheesecake slice was great, Tahn’s chocolate kiwi tart looked gorgeous and tasted so intense that a small slice was enough, Carla’s banoffee pie was so wonderfully creamy but I would never have guessed that she had used coconut cream. Kristy made self saucing chocolate pudding, which I love. I had some chocolate fudge that was most delicious. The matrimonial slice (the one with the jam and coconut) was surprisingly pleasing and a big hit with Sylvia. 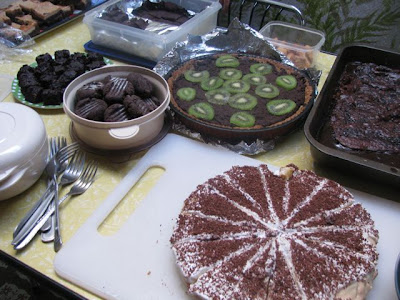 It was great to catch up with some fellow bloggers, especially Vicki with her new wee baby Holly. Lisa was there with her cute little dog Kimba. I thought she would be small enough for Sylvia to enjoy but there were tears and then Kimba was ignored in favour of the pegs on the clothesline. Sylvia got most enjoyment from running down the long hallway of the terrace house. Then, as if we hadn’t had enough excitement for one day, at the supermarket on the way home, Sylvia was serenaded by a sweet old guy with a mouth organ.


Heat the oil in a frypan and fry onions till golden brown. Add broccoli and fry a couple of minutes till it is brilliant green but barely cooked.

While vegetables are frying, stir the linseeds and water in a small bowl and set aside till gloopy.

Mix fried vegetables, linseed mixture and remaining ingredients till combined. Spoon into two greased and lined loaf tins and bake at 180 for about 40 minutes or til golden brown.

On the stereo:
Gather in the mushrooms: the British acid folk underground 1968-1974 – Various Artists