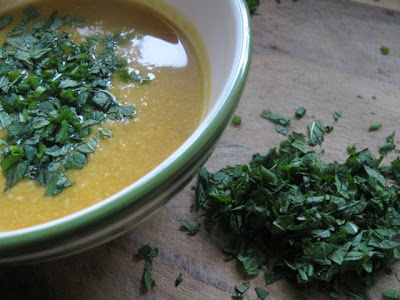 On the weekend, I made chickpea, lemon and mint soup. It was going to be just a casual Sunday night soup but when my friend Will came to lunch I was glad to be able to offer it. By evening I had a mere cupful of soup left for dinner.

The soup was inspired by Ricki and Kim’s Sweet and Savoury Challenge, which focuses on mint this month. I am not a huge mint fan, though there are times I love it. Feeling uninspired, I checked my Stephanie Alexander’s Cook’s Companion because it has a list of companion ingredients for each feature ingredient. I didn’t just find ideas, I found a recipe that I wanted to try. 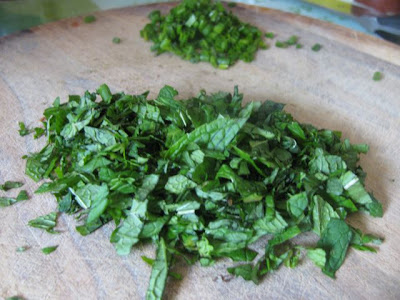 The chickpea, lemon and mint soup was challenging because I don’t usually use dried chickpeas but also because it required me to cook the chickpeas and vegies and then add the seasoning. This is quite a different way of cooking for me.

The soup led to more of the unexpected. I went to the organic stall at the Vic Market to buy dried chickpeas and found to my delight that they were selling Romanescu Broccoli. This is one of the most beautiful vegetables that I have seen on blogs, but until now, never in for sale anywhere near me. These were miniature broccolis, and were being sold alongside mini green and purple cauliflowers. I walked away more excited by the caulis and brollies than the chickpeas. 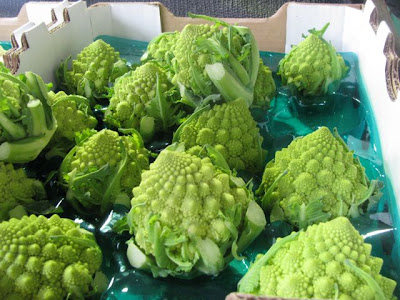 I didn’t wait long to use the vegetables, fearing they would go off. They looked lovely in the roasting tin and, though a wee bit charred, tasted wonderful. Dried legumes are not so impatient and could wait a bit longer. But blog events don’t wait so I set to making the soup on the weekend. 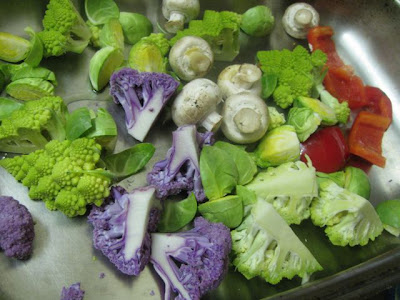 Will compared Sylvia to Chrissie Hynde (oops I think he said Chrissie Amphlett - I get these two confused) upon observing Sylvia’s pout under an unruly fringe upon his arrival and then amazed E by recognizing his choice of music as being by the Strawbs. He offered to provide the bread for the soup, so we walked over the street for some Turkish bread and baklava. It resulted in a delicious ad hoc meal. I am not sure the mint flavour was as prominent as I expected nor was the texture of the soup as creamy as I had hoped for but the soup was full of good simple flavours.

I expected nothing less from Stephanie Alexander, who is a guiding light among Australian foodies. I have avoided buying her Cook’s Companion for many years but now that I finally have taken the plunge and own it, I find it is aptly named. I love the lists of what goes well with an ingredient and all the ideas for each ingredient. There are so many recipes in there that I want to try, that I forgive the weighty tome all its meat recipes and lack of pictures. 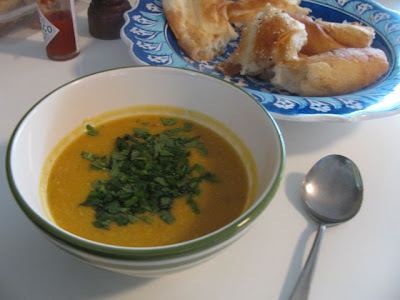 If I wanted any endorsement of my feelings about the book, I need look no further than its inclusion in the Observer’s 50 best cookbooks of all time. There are many cookbooks in the list that I don’t even recognize but I am glad to see Australians represented on the list by Stephanie. So while I might not have made the finest version of this soup, I can assure you it has an excellent pedigree. It also was enjoyed by all who tasted it.

Previously on Green Gourmet Giraffe:
This time last year: NCR Like some pepper in your soup, blondie?
This time three years ago: The Enchanted Broccoli Forest

Add water, bring to the boil, cover and simmer for 1 – 1½ hours until the chickpeas are soft. Stephanie says to reserve 1 cup of water, blend in a food mill and then a food processor. I forgot to take out the water, just used a hand held blender (and later tried sieving but this had no impact) so maybe that is why mine looked more porridge than creamy, which is the opposite of what Stephanie says you should achieve.

Add most of lemon juice (ie juice of 1½ lemons, which was enough for me). Season and add more lemon juice as required. Ladle into bowls and scatter generously with mint and parsley.

On the stereo:
From the Witchwood: The Strawbs
Posted by Johanna GGG at 22:42