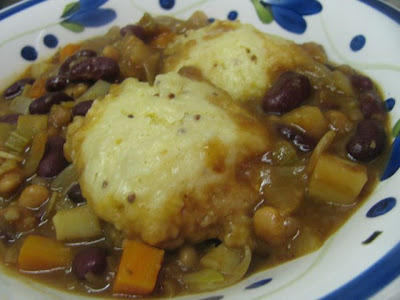 My dad came for dinner last week while my mum is away on holiday. It has been a cold wet winter so I decided to make a hearty bean and beer stew with dumplings. It was from my 30 Minutes Vegetarian cookbook and as usual I managed to take longer than 30 minutes to make it but it was worth every minute. 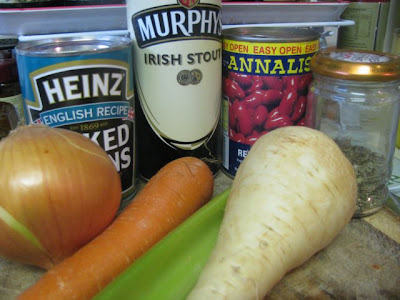 I had thought twice about if I used a tin of baked beans, as I try not to use processed products in my cooking if possible. (You are welcome to spot the double standard since I don’t mind using beer!) But it did appeal to my lack of time these days. The flavour of baked beans and beer worked surprisingly well. I used Murphy’s Irish Stout because it was leftover from bread baking. It was quite strong and I think I might prefer a milder beer next time (and if I was more organised I would look for a vegetarian beer). 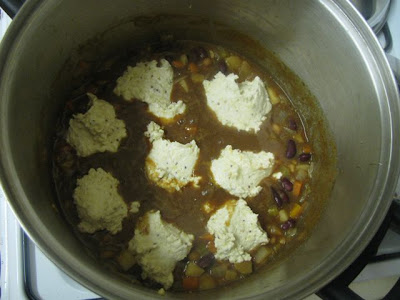 I did make some changes. I added some carrot, garlic, dried herbs instead of fresh herbs and added a shake of smoked paprika. I added cheese to the dumplings and reduced the mustard from 2 to 1 tablespoons. We wouldn’t have wanted any more mustard! I had leftovers for lunch the next day and thought the dumplings were even better after sitting in the fridge overnight. 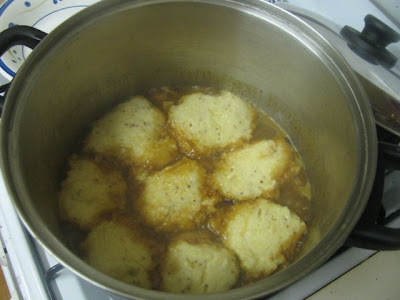 My dad was keen to return the favour. He invited the family for a roast dinner on Sunday. We were all interested to sample my dad’s cooking but unfortunately he was too ill on the day to cook. Lunch was provided by everyone except my dad. It was delicious. We ate at my sister Susie’s place where the kids had a great time playing outside with the basketball hoop. 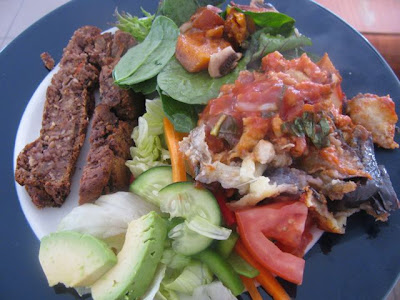 I took down a nutroast. I was pleased that Sylvia had some of it with some of my sister Susie’s salad, though she was distracted by all the action and much preferred climbing up to stand on the kiddie chairs and arguing with Cooper over the piggy bank. My brother’s new girlfriend Sophie brought along a few delicious dishes – an eggplant tomato bake and a pumpkin and pine nut salad – so there were plenty of veg options. For sweets, we had two apple cakes, thanks to Fran and Sophie, a pav with crumbled violet crumble and fresh watermelon and strawberries. 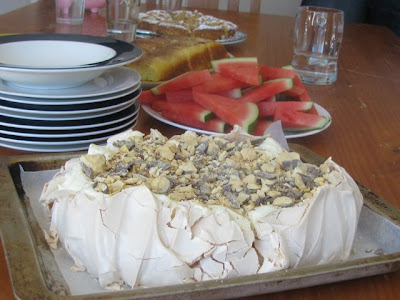 The pav by my sister in law Erica was especially impressive. My mum often make pavlova with peppermint crisp crumbled on it. Erica did well in choosing my dad’s favourite chocolate bar instead. The shards of chocolate and honeycomb sprinkled on the cream were very pleasing and I suspect it wont be the last time we see that combination.

I am sending this stew to My Legume Love Affair blog event, which celebrates beans and lentils. It is the brainchild of Susan from the Well Seasoned Cook and is hosted by Simone from Bricola this month (#26).

Heat oil in a stockpot and gently fry onion, parsnip, carrot, celery and garlic for 10-20 minutes (I didn’t time how long it took me but I did it till they softened). Add stock, beer, baked beans, kidney beans, herbs and smoked paprika. Bring to the boil and simmer for about 10 minutes until slightly thickened.

While stew is cooking, make the dumplings by rubbing butter into flour and cheese, then stirring in the mustard and buttermilk. When stew is cooked, drop 8 dessertspoons of dumpling mixture into the stew. Simmer for 10-15 minutes until the dumplings are cooked through. Serve hot.

On the Stereo:
Set List: The Frames
Posted by Johanna GGG at 22:19