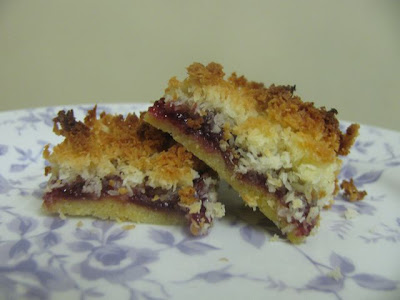 I felt quite flat this morning. I found myself playing The Frames song Pavement Tune and singing along to the lyrics “I want my life to make more sense”. Australia has a federal election last night and neither of the major parties won enough seats to form a majority government. The country feels rudderless, bereft of leadership.

We are waiting to hear who will govern the country. With a hung parliament it could go either way. Postal votes are still to be counted, alliances are to be negotiated, processes to be navigated in this unusual situation. It will feel shameful if the Labour Party does not get back in because we will have such a short-lived stint with our first female prime minister.

I believe that leaders emerge in time. My organisation has finally got a new Chief Executive Officer, after eight months of working in a leadership vacuum. All of the staff are delighted. Australia will appoint a prime minister soon. I fear, based on the election campaigns of the contenders, that it may take longer to get a leader with vision and compassion. 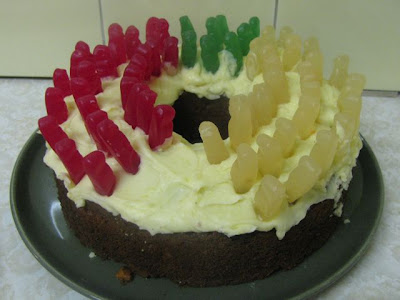 Last night wasn’t all bad. We went to an election night party organised by my friend Yaz. He made a carrot cake, to symbolise the carrots offered to the voters by the contenders, and decorated it with jelly babies to symbolise the graphics that represent those elected in the Senate. Brian served up a plate of watermelon and political simile as he explained that it was green on the outside and red on the inside

I took along a batch of Liz O’Brien’s vegetarian sausage rolls (though they are probably better known in Melbourne as Cindy and Michael's veg sausage rolls). They went down well. If I had been thinking about symbolic food I might well have take some of my matrimonial slice. 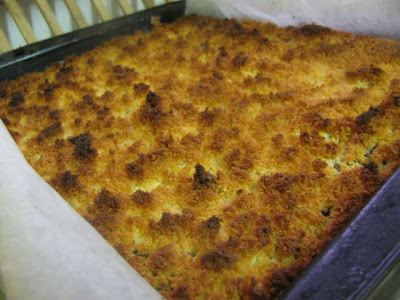 You may know this slice by another name. It has a biscuit base, jam filling and sweet coconut macaroon-like topping. I think it was my friend Nicki C who called it matrimonial slice. I don’t know where the name came from but I assume that it was because it was so good that a gentleman would have to propose to the young lady who baked it for him. A quick search of the internet seems to suggest this is not a common name and that where it is used oats are often involved.

Matrimonial slice might be useful for our unmarried incumbent prime minister Julia Gillard should she wish to marry. It could be useful if the Greens got their way and gay marriage was legalised. But most likely is that it will be useful to the major parties who are looking at a political marriage to gain the power to rule the country. 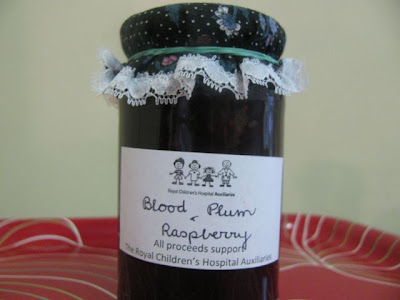 To tell you the truth I actually made this slice because my dad was coming to dinner and I thought he would appreciate some home cooking while my mum was away. It is a slice that my mum often made for us when I was little but I am not sure this recipe is a keeper for me. It needs a bit of work. 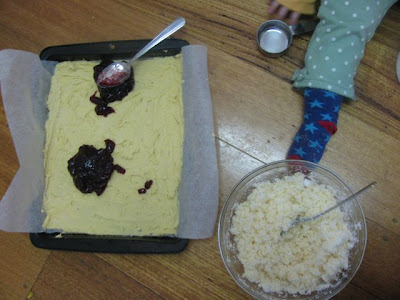 I love the recipe because it is like making shortbread (base) taste better and macaroons (topping) taste more substantial as well as using up jam which I don’t eat so much on toast. Oh and it tastes good too. It is easy to make and uses ingredients that are kitchen staples. Sylvia and I stirred it on the floor and she helped me sprinkle the coconut topping on the jam layer. Only a bit of it got on the floor! You might also be interested to hear that cats find it fascinating! 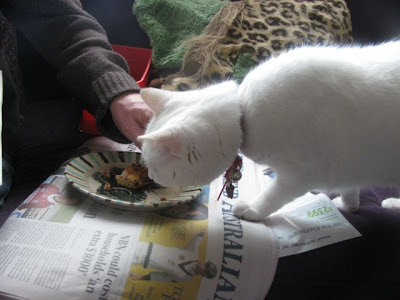 The base on this version was a bit thin and undercooked on the bottom and well cooked on top. Below are a few other versions of the recipe to inspire me when I next try it. You might be interested to notice they are all Australian.
Previously on Green Gourmet Giraffe:
This time last year: PPN Neofolk Buckwheat Pasta Bake
This time three years ago: Blues Clues Birthday Cake

Preheat oven to 180 degrees. Cream butter, sugar and egg in small bowl until light and fluffy (I did this by hand). Stir in flours and custard powder until combined. Spread mixture evenly over the base of a lined 20cm x 30cm lamington tin. (My tin was a little bigger and I thought maybe I needed a slightly smaller tin – maybe my 23cm square tin.) Spread a layer of jam over the base.

Make the topping by mixing all the ingredients together. Scatter evenly over the jam layer and lightly press down.

Bake for 40 minutes and cool in the tin. NB I found this a bit problematic as my oven can be a little fickle and I think the middle could have been cooked more but there was no way to test it till it was cooled according to this recipe. I also found that my slice browned on top really quickly – by about 20 minutes – so I had to put it on the lower rack in my oven for about half the baking time.

The recipe says keeps for up to one week in an airtight container – ours is still tasting good after 4 days. I have read that it can be frozen but I haven’t tried this.

On the Stereo:
Workers Playtime: Billy Bragg
Posted by Johanna GGG at 22:26