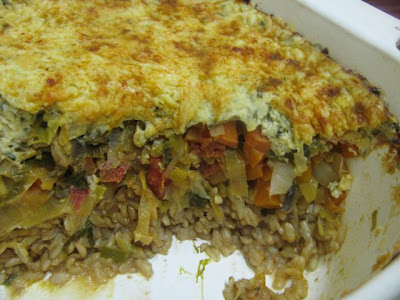 This week I have had some time to cook. I have finally made Florentines and an Irish no knead bread (coming to this blog soon) that I have wanted to make for ages. But I have struggled to come up with ideas for dinner. This rice casserole come from Cooking with Cranks and was a surprising success. 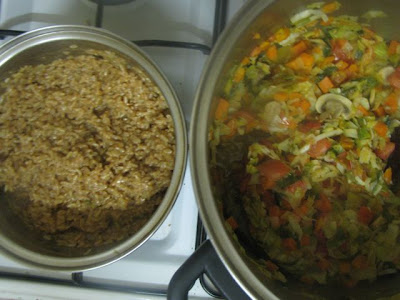 Maybe I expect more from dinner in the way of clearing the fridge. I originally decided to make the recipe as it was written with mushrooms, courgettes, and red pepper that suggested an Italian style casserole. But my mind started searching my fridge and finding sour cream, carrots, mushrooms, dill and chives. It suggested that Russia should be my inspiration. 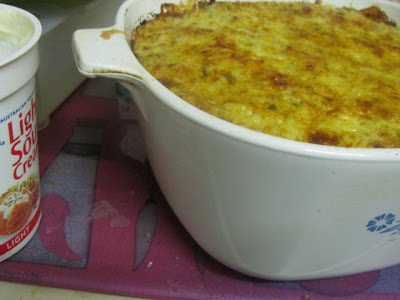 It took a while to put together but it was forgiving of my attention wandering as I put away washing and fed Sylvia her dinner. This casserole lasted us a few nights so it was worth the effort and I loved it. E was a bit less certain and thought it could have a bit more seasoning (he also said that it would be improved with more pasta!!!) but it was enough for me. The lightly seasoned vegetables were a pleasant contrast to the well seasoned rice (I used more stock because my rice took so long to cook) and the tart cheesy topping. 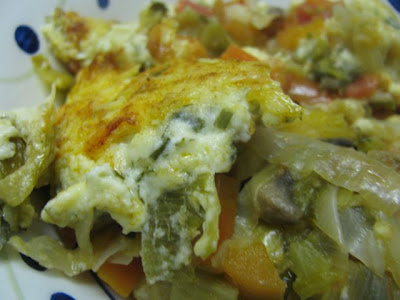 However what was lovely about this was feeling it was almost a formula rather than a recipe. Seasoned rice on the bottom layer, vegetables in the middle layer and a creamy topping based on a white sauce. While the recipe is neither vegan nor gluten free, I could imagine a version with a soy milk, tahini and nutritional yeast flakes topping or even replacing the spoonful of flour with GF flour. And some different vegetables. Maybe some broccoli or pumpkin would be nice. The possibilities are endless.

To make rice layer: Fry shallot in butter until translucent. Add stock and rice. Bring to boil and simmer, covered, for about 30-40 minutes until rice has absorbed the stock and is soft. Add extra water if rice needs it. I probably added almost as much water as stock and cooked mine for about 1 hour because it took so long to soften. (Was it because of the salt in the home made stock?) Stir in egg, if using.

Meanwhile make vegetable layer: heat oil in a stockpot. Gently fry leeks, carrot and cabbage til soft and wilted. I am not sure how long mine took but I suspect it might have been about 30 minutes. I put away washing and prepared other vegetables while it cooked. Once done, add mushrooms, tomatoes, garlic and seasoning. E thought some Worcestershire sauce would be good but I just added a pinch of salt – I thought the rice had enough seasoning. Cook till mushrooms and tomatoes have softened (maybe 5-10 minutes).

To make cheese sauce, melt butter in a medium saucepan and stir in flour to make a roux. Stir the roux over low heat for a couple of minutes and then very gradually stir in the milk and sour cream. Bring to the boil, stirring frequently to avoid lumps. It should thicken slightly. Stir in cheese and herbs. Cool slightly and stir in egg.

To assemble, spread rice in the bottom of a greased 23cm square casserole dish. Spread the vegetable layer on top and then the cheese layer. Sprinkle with paprika. Cook at 200 C for about 30 minutes or until the top is lightly browned. I turned off the oven and left the casserole in it until we were ready to serve. I also heated in in the oven the next two nights – for about 30 minutes at 180 C each night.