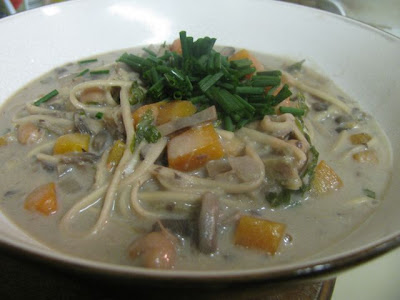 On the weekend we watched the first episode of the remake of The Prisoner. E thought it was great but I missed the whimsy of the original 1960s tv series. That evening as we discussed it, we agreed that my mushroom and rhubarb soup might have gone down quite well in the Village.

The Prisoner was a mystery to me when I was young. The only reason I had heard of it was that in the far away land of the UK, our Aussie tv series Prisoner, was called Cell Block H so as not to confuse it with The Prisoner. I don’t remember watching Prisoner but my sister swears that we used to crawl down behind the couch to watch it when we should have been in bed.

It was only when I met E that I began to appreciate The Prisoner. It was one of his favourite tv shows so he bought DVDs of the series. It is an amazing experience in 1960s psychedelia and paranoia mixed with the British seaside town. E thought an American stuck in the desert in the new series is fine but I just don’t like change that much.

When it comes to food I will embrace the new, though perhaps only when it has its own brand of whimsy. When searching for recipe for Ricki and Kim’s Rhubarb SOS Challenge, I had come across a Mushroom Soup with Rhubarb that intrigued me. 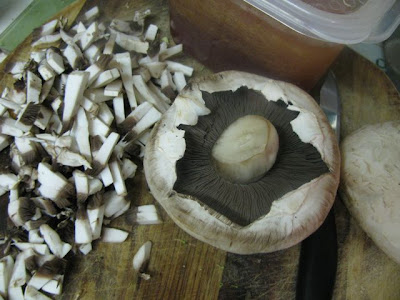 When I told my mum over the phone what I was making, she told me I was crazy and if she made it for dad he would have a fit. In the background E was telling me that take away pizza was looking good and Sylvia was screeching with laughter as she played with her big new green ball. None of this could put me off my challenge

I made some alterations to the recipe. I didn’t dicard the carrots, used less rhubarb, used parsley instead of dill, and added some chickpeas. The soup reminded me of stroganoff with the creamy noodles. The rhubarb made it quite sour and I ended up adding more salt and some honey. I served it with Brussels sprouts and it was nice but more interesting than wonderful. Least pleasing of all was the texture of the rhubarb in the soup so next time I would chop it finely rather than slicing it thinly. 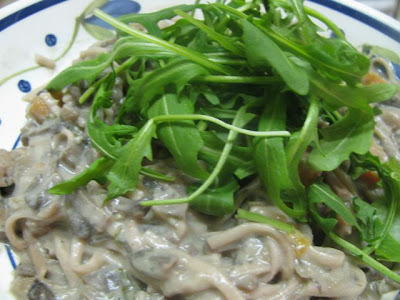 Yesterday I had the leftovers for lunch with rocket and I loved it. I find rhubarb odd to cook with because it takes a bit of cooking for the flavours to show themselves. Maybe for this reason, the soup improves with a bit of maturity. Maybe my appreciation of the new episodes of The Prisoner will also improve with time.

I am sending this to Ruth of Once Upon a Feast for the Presto Pasta Nights blog event (#175). Head over there on Friday for some pasta inspiration.


Heat oil in a large saucepan and fry onions for a few minutes on a low heat. Add carrots and continue frying. I fried them for 15 minutes but if I hadn’t lost a vegie sausage I was giving Sylvia for dinner I might have fried them less.

Add mushrooms and garlic and fry an additional 5 minutes. Add parsley rhubarb, stock, water, chickpeas and a little salt. Go easy on the salt and wait till the rhubarb has cooked to adjust the seasoning with salt and honey because the sourness of rhubarb will alter the flavour significantly. Simmer for about 10-15 minutes and then adjust seasoning.

Add noodles or pasta and cook for just a few minutes (my pasta only needed 2-3 minutes. If your noodles need longer they might need to be soaked in hot water or parboiled).

While pasta is cooking, remove a little of the liquid and mix with the cornflour in a small bowl. Add cornflour mixture to the soup and bring to the boil so it thickens slightly. Add sour cream and heat through.

Ladle into soup bowls and ladle with chives. Serve with green veg and bread.

On the stereo:
Serendipity: an introduction to … John Martyn