Nutty fries and other people’s plates 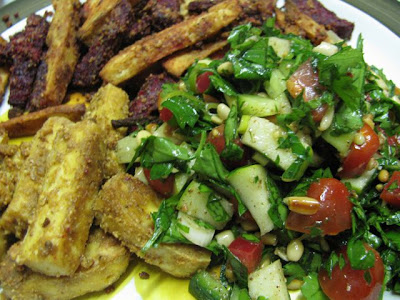 Last week was not a good one for cooking. Perhaps that is why when I went to the supermarket yesterday Sylvia decided she had to walk around by herself and make some choices. So today I will tell you a bit about what we have been eating and give you a couple of recipes I made earlier.

I tried a Peruvian baked quinoa and cheese from Vegetarian Times last week. The recipe suggested it was a gluten free alternative to mac and cheese, but I didn't see much similarity. We were not that keen on it – too milky and not enough texture. Sylvia wouldn’t touch it but when we ate it with potato scones and Brussels sprouts, she was interested in these side dishes. 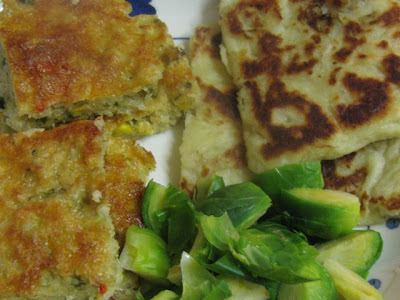 We’ve all been to a restaurant, made our choice and seen someone else has chosen what looks much better. Sylvia is often that person in the restaurant. She refused potato scones when I gave them to her but loved eating them from my plate.

I didn’t even offer her Brussels sprouts because they suffer so much bad press. But a good example is a powerful thing. We eat lots of sprouts in winter and Sylvia has chosen to start eating sprouts by helping herself to the ones on my plate. She loves them so much she even has tried to offer them to Zinc. I shouldn’t have been so surprised. As a lover of broccoli and peas, she does not have any problems with green vegetables. 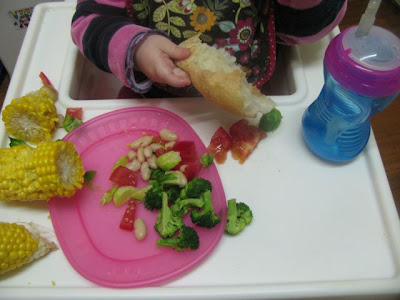 I was even pleased on Friday that she chose a green bowl for her breakfast cereal. She loves to help with breakfast by getting her box of mini wheats, the carton of milk and her bowl.

Sylvia grows more and more alert to the extent that she is now starting to choose bowls, coats and shoes. She loves her shoes and would give up all the fancy toys for a pair of socks to pull on and off her feet. She notices each plane flying over the house, delights in jigsaws, cries if I make her get off a swing, and can point to her nose when asked. 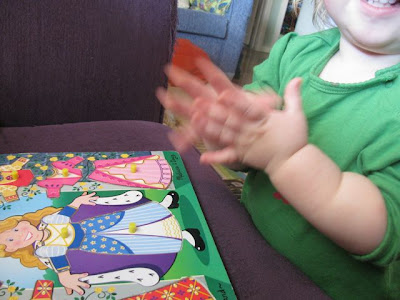 Watching Sylvia is a reminder of how wonderful simple things can be. Her excitement at a piece of fruit is so intense as she reaches out with impatience. Lately her favourite fruit is banana but she loves apples and pears and watermelon and pineapple and mandarins. Though I suspect she might eat gingerbread men instead if given the choice. She loves to dip her chubby hand into the biscuit barrel for a gingerbread, which is why I have found the smallest gingerbread cutter possible. 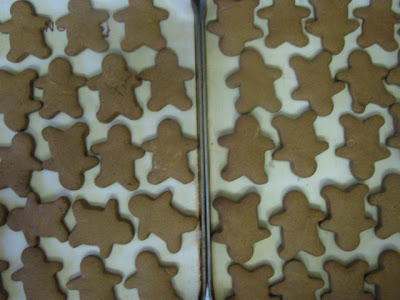 Sauces and stews don’t interest her. Sylvia likes food plain. When I made tofu omelettes the other day, she kept begging for raw tofu before it went in the food processor. Most nights she has a selection of vegetables (such as broccoli, corn, tomato, mushrooms) and either chickpeas, vegie sausages or tofu. She will have rice, scrambled eggs or pasta so I keep trying other food but it is slow work. She wont eat mashed pumpkin but enjoyed pumpkin scones. She wont eat mashed potato off her plate but is curious about it when it is on mine. 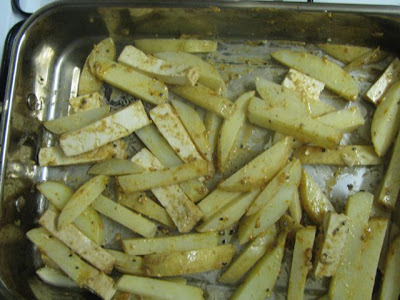 However potato is popular in roast potato and chips - like most other carbs such as taco shells, crisps, rice crackers and toast. That seems quite normal with kids. But when I recently made some nutty fries, they were well seasoned so I didn’t think they would appeal to Sylvia. To my surprise, she was eating them off my plate. 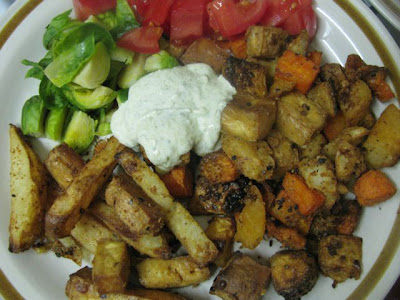 The recipe was an amalgam of one given to me by my sister, Fran, and Ricki’s almond crusted fries. I first made it last October. It wasn’t quite right because the fries didn’t crisp up enough but we were impressed. I tried more oil but that didn’t help. When I tried it again recently, they still weren’t crisping as much as I hoped. The only possible solution I can see seems to be frying them longer because my oven isn’t that powerful. It also depends on what vegies or otherwise are used.

I have tried a variety of root vegetables, potatoes and tofu. Potatoes take ages but tofu cooks quickly. Sylvia was not so keen on the tofu fries but even the potato fries had added protein so I was happier for her to eat these than usual. 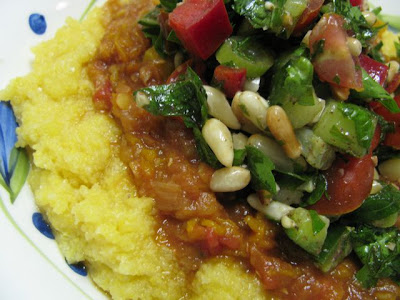 The fries are best with a good salad but also good with some sprouts, tomato and a pesto yoghurt dressing. I was given a pinenut and parsley salad recipe for serving with the fries so I have also included it below. It is like a low carb gf tabouli and is delicious. When I made the salad, on the second night I had it with soft polenta and tomato sauce which was excellent too. Unfortunately I don’t have a source because Fran’s recipes seemed to come from a collection of cookbooks. 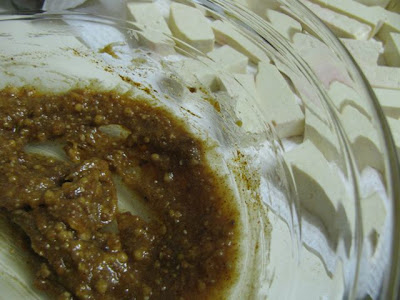 Previously on Green Gourmet Giraffe:
This time last year: Apple and date cake
This time two years ago: Do I dare to cook with one less pear?
This time three years ago: Baking cake for climate change

Flavouring:
Vegetables of choice, cut into chips:
Mix all the flavouring ingredients together. Toss with vegetables and/or tofu of choice in two large baking dishes. More room will help the fries crisp up. Bake at 220 – 230 C til they are golden brown and (if possible) crispy. I baked them for 50 minutes at 230 C on the top shelf without checking and then lowered the heat slightly and baked another 30-40 minutes but a better oven should do it in a shorter time.

Parsley and Pinenut Salad
adapted from an unnoted source
serves 4
Mix everything together and serve at room temperature.

On the stereo:
Closer: Joy Division
Posted by Johanna GGG at 11:11