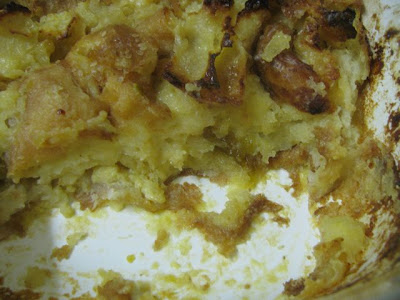 Back in April when I visited Yaz at Easter time, he gave me a jar of homemade fig jam and an accompanying recipe for Turkish fig pudding. The jam sat in a corner of my kitchen in a corner with my good intentions until my mum cleaned up on one of her visits (I tell her she doesn’t need to tidy up but she insists) and opened the jar so she could take half home. Once opened, it seemed time to make the pudding, and once tasted I was amazed at how indescribably good it was. 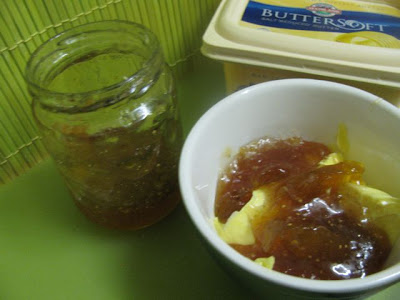 The Turkish fig pudding is a bread and butter pudding with a difference. It is quite unlike the ones I have made before. No fruit, no chocolate, not even a scattering of coconut on top. Instead it had lots of cream and Turkish bread, which was a challenge.

We have many fine Turkish shops selling bread that is so good it is tempting to just eat it before it becomes pudding. It comes in large flat soft loaves with indentations that encourage pulling it apart to dredge through dips. The first loaf I bought was torn into chunks and dipped into hummus. 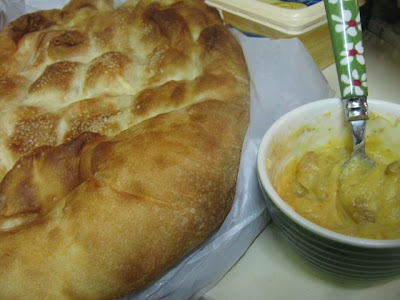 The time I bought a loaf for the same purpose, I made the pudding that night. I was glad I only needed half the loaf so we still had more to eat.. I had never thought to try Turkish bread in bread and butter pudding before but it was wonderful. It was also my first time using rose water in any sort of baking and I am pleased to say it was a success. I was so wary that I added it a quarter of a teaspoon at a time, tasting after each addition. 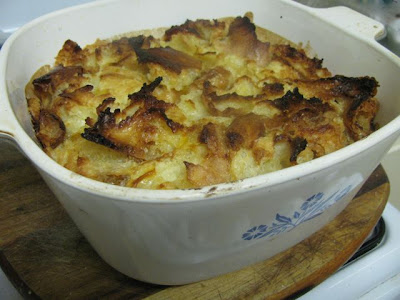 This pudding is different from my usual desserts and has to be tasted to be believed. I kept thinking of jelly though bread, butter, jam, cream and eggs surely do not make a jelly. They do make a melt-in-the-mouth bready custard that is more creamy than eggy. The combination of fig and rosewater imparts an exotic sweetness that cloys and yet satisfies in a similar way to honey. Perhaps the rosewater made me think of Turkish delight and hence the taste of jelly.

It is rich so you wont want too much, though you may need another sneaky spoonful when you start to get curious about how good it tastes. I highly recommend it in small servings. I would like to recommend that you use fig jam made by a good friend who makes figs with the fruit of the trees in his backyard, but not everyone is so lucky. I am sure any fig jam would still make a pudding to cause fathers and babies alike to swoon. Actually Sylvia only had three spoonfuls but that is a good result with her. I took some to my parents and my dad was delighted by it. 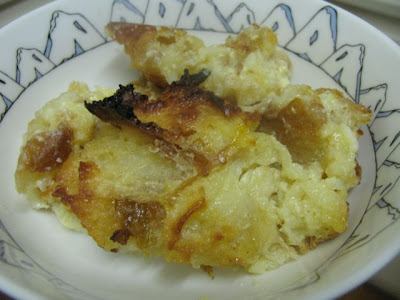 I am sending this pudding to Susan for YeastSpotting which showcases all things yeasty around the blogosphere including baking with bread.

Previously on Green Gourmet Giraffe:
This time last year: Bizarre gnocchi and strange crumble
This time two years ago: Paella with thanks
This time three years ago: Lasagne and the Boy Wizard

Turkish fig pudding
adapted from Three ways with...stale bread, and 99 other ingredients you'll find in your pantry, fridge or freezer by Ross Dobson
serves 6-8
Preheat oven to 200 C (I had mine at 210 C) and grease a medium oven proof dish.

Slice the Turkish bread in half to make two thinner pieces. Roughly tear into bite-sized pieces. Combine butter and jam and then spread over pieces of bread. I found this time consuming but I think it was worth it. Place buttered bread in prepared dish.

Combine cream and milk and add sugar and rosewater to taste. (I prefer to taste before the raw eggs go in). If you are a rosewater novice like me you can add a little at a time to see how much you need. Lightly whisk in eggs and pour the mixture over the bread. I pressed it into the bread a little but there didn’t seem to be any need to leave it to soak like some other bread and butter recipes I have encountered.

Bake for 30 minutes or until it is crisp on top and the custard is set. After 30 minutes when I put a spoon in, the mixture was too runny so I baked mine an additional 30 minutes.

On the Stereo:
Space Hymns: Ramases
Posted by Johanna GGG at 23:45