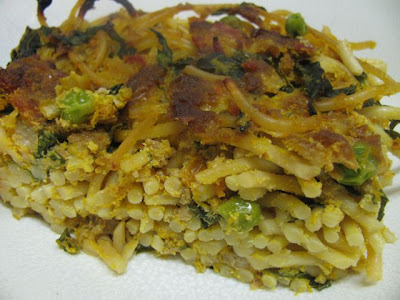 Last week the doctor said that Sylvia was too sick for childcare so I needed some sturdy meals to see me through some days at home with a sick grizzly child. I decided to try Helen’s Sicilian Spaghetti Cake. It was made easier to put together because Sylvia insisted on staying outside playing in her favourite pots of dirt. 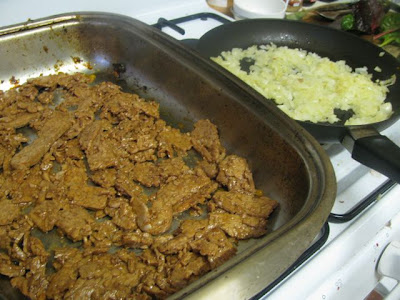 Deciding what to include was made easier in an unexpected way. I was thinking about what to include instead of bacon and perusing the comments on Helen’s post. There was my own suggestion of pumpkin that I had forgotten. (So next time you are wondering if you should comment on a post, here is one reason to do so!) I decided to make facon out of tempeh and add some parmesan for some of the intensity that would have been found in the bacon. I was pleased to be able to use a lemon and some baby silverbeet from the garden. 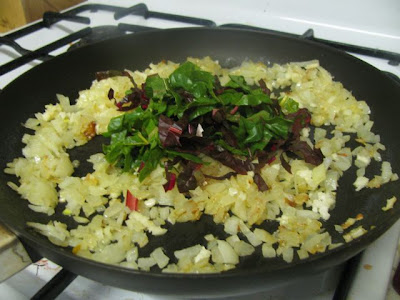 My version was remarkably different to Helen’s. Hers was a round spaghetti cake filled with lemony ricotta, bacon, olives and artichokes. Mine was a roasting pan bake with roasted pumpkin, sun dried tomatoes and facon, which all fused with the ricotta to give it a wonderful flavour. I didn’t find the need for the generosity with olive oil that Helen encouraged, which may be due to the different ingredients I used. 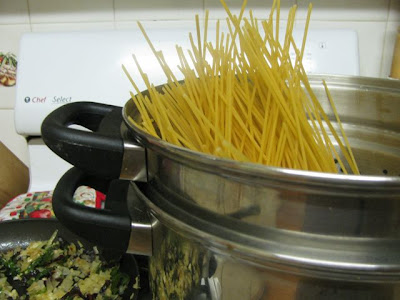 It was only when we ate that I found the taste familiar and identified it as similar to a macaroni cheese that I had posted a few years ago. However, this dish had different flavours and was less heavy. I think the facon was essential in replacing the saltiness in the bacon, even though it made the dish a little more complex. I am yet to find a perfect facon recipe as I just can't work out how to get it as crispy as bacon, but I will keep searching. 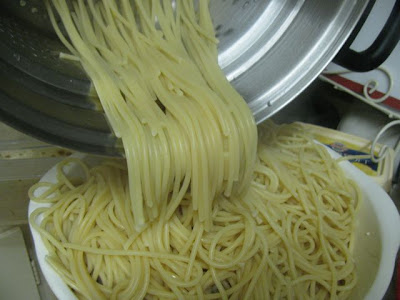 The best surprise was that Sylvia loved it. She now rejects a lot of food I make for dinner. But she loves spaghetti and enjoyed shoving the long wriggly strands in her mouth, especially when she grabbed them off my plate. I hoped that some of the vegetables and facon stuck to the pasta but I think that kids are often as sneaky as parents when it comes to food. 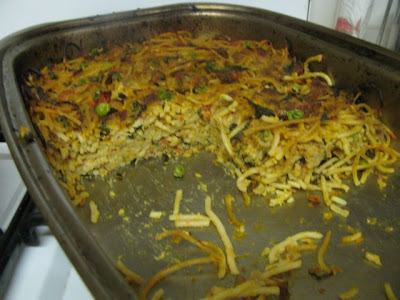 The pasta bake lasted for a few nights as well as doing very well for the odd lunch and night time snack. It reheated well but Sylvia got less and less enthused each night we had it. Not to worry. E loved it and I was grateful to have the delicious leftovers at the end of a few tiring days. 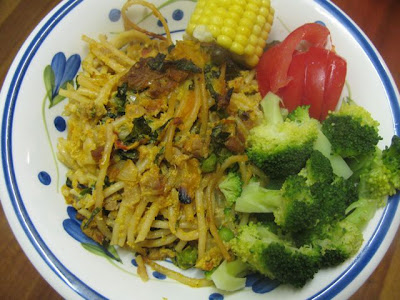 I am also sending this to Helen of Fuss Free Flavours for this week’s Presto Pasta Nights (#171), the event coordinated by Ruth of Once Upon a Feast.

Pumpkin, Ricotta and Facon Spaghetti Bake
inspired by Food Stories
serves 8
Toss pumpkin with olive oil and pinch of salt in a roasting dish and bake at 220 C for 30 minutes or until soft.

Cook the spaghetti til it is a little less cooked than you would like. I simmered mine for about 8-9 minutes in a large stockpot because it is far more pasta than I usually would cook.

Fry onion in 1 tsp olive oil for about 10 minutes till golden brown. Add garlic and silverbeet and fry another 1-2 minutes.

Mix together pumpkin, onion mixture and remaining ingredients then add cooked spaghetti and toss so it is coated evenly with the ricotta mixture. Coating the spaghetti is not easy because there is so much and it loves to clump together but using a spiked spaghetti serving spoon and mixing in my stockpot helped me.

Scrape all the spaghetti mixture into a greased roasting dish – I used the same one that I roasted the pumpkin in (but cleaned it first). Bake at 220 C till crispy and brown on top.

Facon (Tempeh bacon)
adapted from Diet Dessert and Dogs and Vegan Brunch
Slice tempeh into wafer thin slices and place in a large plastic tub. Toss with remaining ingredients and marinate for about 45 minutes (or more if you get organised), giving a good stir every now and again. Arrange slices in a large roasting try and bake until most of the moisture has been absorbed. I baked mine for 15 minutes at 180 C and then for 15 minutes at 220 C. I always live in hope of crispy facon but have only managed to get good flavour but not the right texture.

On the stereo
What I did on my holidays: an introduction to…: Fairport Convention