Falafel for E, Pizza for Sylvia 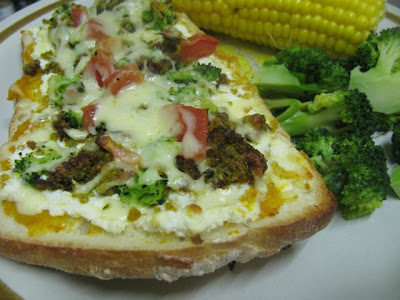 Last night I got home from work and told E that I had decided we would have falafel for dinner. I had bought some falafel on special and it's best-by date was yesterday. He looked at me in surprise and said, but we had most of them for lunch. Necessity being the mother of invention, dinner morphed into falafel pizza on turkish bread.

I love trying different pizza toppings. Last night it was inspired by the contents of the fridge: mashed pumpkin, ricotta, steamed broccoli, diced tomato, crumbled falafel, and grated mozzarella cheese on top of two halves of a small turkish bread baked in a hot oven for about 10-15 minutes. Delicious. 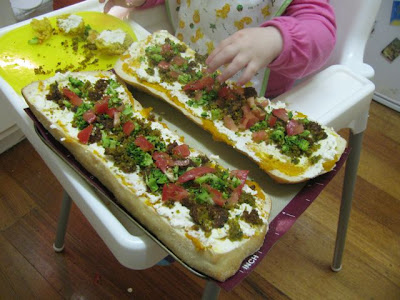 Most amusing was my help in the kitchen. Sylvia was grizzly so I put her in the high chair by me and placed the turkish bread on the tray in front of her. She was fascinated by the ricotta and kept digging a chubby finger in it. She also enjoyed sprinkling some of the toppings on it. But when it came out of the oven, she turned up her nose and left it to E and me to enjoy it.

On the Stereo:
Early Morning Hush - Notes from the UK Folk Underground 1969-1976: Various Artists
Posted by Johanna GGG at 19:56