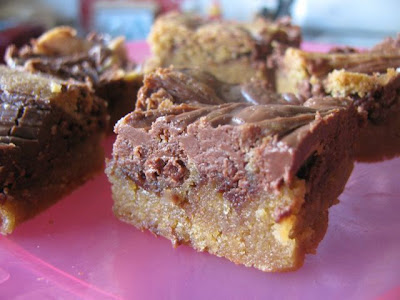 On Monday it was my turn to do morning tea at work. I had decided to make a batch of nutella brownies that I had found online recently. Cooking for colleagues means that I am not familiar enough with everyone’s tastes to feel I can experiment too much. This recipe seemed both safe and impressive. 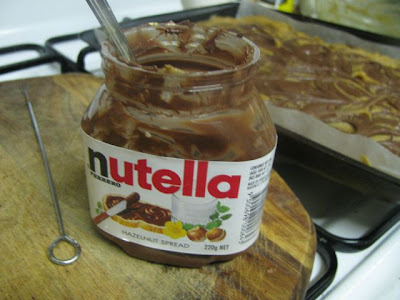 I had never encountered a “blondie” as a slice before I started blogging. Hitherto the term either referred to a hip post punk band, a silly cartoon or a patronising way to address women. I had had my fair share of Nutella in my childhood – our school canteen was into health food but they did sell little sachets of Nutella. But I have not really had much success baking with it. This slice showed me just how good blondies could be and one of the best ways I have come across to use Nutella in baking.

If you are seeking either blondies or Nutella recipes, I highly recommend this one. I am backed up by my work colleagues who enjoyed them whole heartedly. Just as well morning tea was a success as nothing else seemed to go well that day. 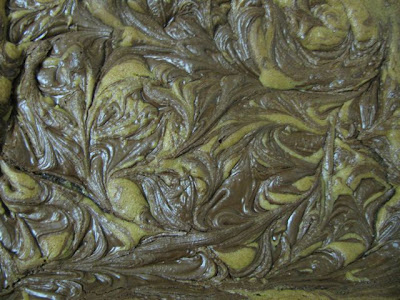 I am sending these nutella blondies to Champa of Versatile Vegetarian Kitchen for her weekly Bake-Off round up. This is an event that I have just discovered. It showcases a whole array of baked goods in the blogosphere, including cakes, casseroles, cookies, quiches, scones or anything else produced in the oven. Lots of great ideas.

Finding out about blog events is always a bit of a challenge. I have some links on my blogroll but they constantly change. So I was pleased when Jacqueline, of Tinned Tomatoes blog, announced that as well as bringing up her gorgeous wee baby, keeping up her blog and co-hosting the No Croutons Required event, she has a new project - the Food Blog Diary that lists blog events and other food events.

Nutella Blondies
From the Cookbook Chronicles

Melt butter in a large heat proof bowl in the microwave. Add eggs, brown sugar, castor sugar, salt, vanilla, flour, baking powder and bicarb soda. It will be quite a thick batter.

Spoon batter into the prepared tin and smooth with the back of a spoon. Dollop nutella over the batter. Use a skewer to swirl it through the batter and make lovely designs.

Bake for 25-30 minutes until the batter is puffed and golden but still a little moist in the middle. (The recipe warns not to overcook but my oven is not too powerful so I did 30 minutes without too much cooking however I felt it was quite soft in the middle once it cooled.) They will collapse slightly once out of the oven.

Cool in tin and then slice into squares or bars. (The recipe says to cool for an hour but I cooled mine overnight.)

On the stereo:
Serendipity: an Introduction to John Martyn
Posted by Johanna GGG at 19:17