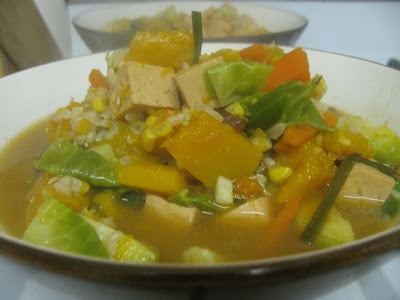 I stood in the middle of the kitchen not knowing what to eat for dinner. I was tired after a busy day at work and the night was slipping away. E suggested pasta and pesto but I needed something full of healthy vegetables. I try to eat well but it really is easier when there is plenty of energy and time.

E tries to help but what do you expect from a man who sees “tins toms” on a shopping list and buys two packets of tim tams – an extra one because he expected I would be baking with the chocolate biscuits. Surely everyone know tins toms means tins of tomatoes! 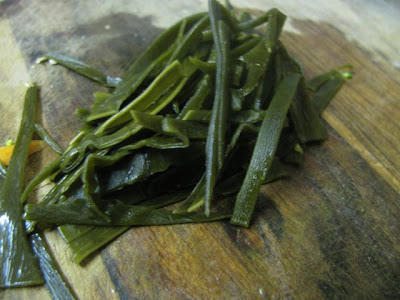 I had a packet of soba noodles and decided to turn them into soup. I perused my savoury recipes notebook before finding the recipe that I had in mind. Somen Noodles in Autumn Broth. From The Age Good Weekend Magazine many years ago. It was bursting with vegetables and flavours: pumpkin, mushrooms, yellow squash, 100ml of mirin, fish sauce, kombu, white miso. I used the vegetables I had and eased off on the seasoning. The fish sauce was replaced with tamari and a touch of umeboshi vinegar. I found some leftover brown rice in the fridge that was used instead of the soba noodles. 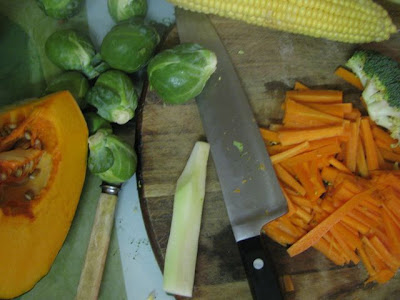 The soup was just what I needed. Delicious, seasonal, packed with vegetables and light enough to leave room for dessert. Which was just as well because I had some leftover rhubarb and quince crumble (recipe soon). My only quibble was that I could have cooked the Brussels sprouts a little less. 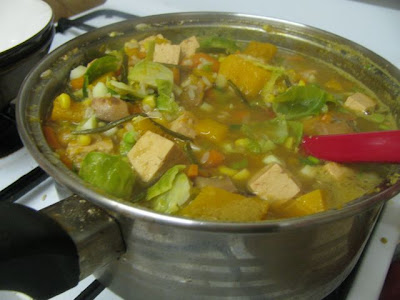 I was pleased to have leftovers the following night because we had a full day visiting Heide Museum of Modern Art and I could just warm up the soup when we got home. It had been quite an outing because it was our first trip where Sylvia constantly wanted to be out of the stroller and digging her fingers in dirt or climbing any stairs she could find. I enjoyed seeing the house where Sunday and John Reed had lived (Heide I) especially the warm inviting library. I liked Simryn Gill’s exhibit though the corner where the public was invited to rip up old books to make paper boats looked like the cleaners had forgotten to clean up (but it was fun). 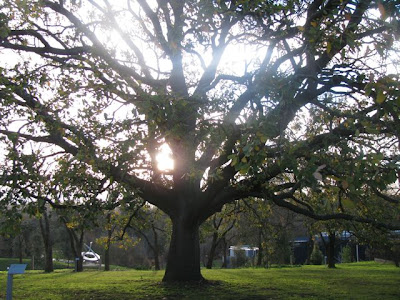 This was last weekend not yesterday. This weekend we have all been snuffly and miserable. We have missed two of Sylvia’s cousins’ birthdays and I have had Sylvia sleep on my lap for over an hour today. I have made soup that looks like Dickensian gruel but fortunately we have been comforted by a batch of pumpkin scones. As I write, E is playing guitar and Sylvia has run into the lounge room with his plectrums giggling mischievously.

And just to prove E is not the only one to make mistakes (with tins toms) I will tell you about my cinema expedition last Sunday. I raced to the cinema thinking that my free cinema pass expired at the end of June. It was fortunately that I had misread the due date, which was actually the end of July, because I found that I was at the wrong cinema chain. Going to the cinema is a rare treat these days so I paid up and saw Animal Kingdom anyway. I highly recommend this well made Australian film about the demise of a criminal family. On the way home I finally got Sylvia some bookends for the books in her room. 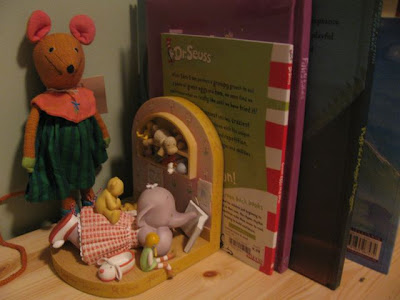 I also highly recommend this soup. It is the sort of thing that I make in summer often but don’t often make a winter version that is hearty enough to satisfy but wont weigh me down.

Japanese-style Pumpkin, Sprouts and Tofu Soup
Serves 4
Soak kombu in cold water for about 15 minutes (which can be done while you are preparing veg), then drain and cut into thin strips. (The soaking liquid can be reserved and tipped into the soup)

Place stock, water, tofu, shitake mushrooms, dash, ginger and carrot into a large saucepan or stockpot and bring to the boil. Simmer for about 5 minutes. Add pumpkin, corn kernels, brown rice and kombu and simmer for 5 minutes. Add Brussels sprouts and cook for about 3 minutes.

While the vegetables are cooking, spoon some hot stock into a cup or small bowl and dissolve the white miso into the stock. Stir in tamari and mirin.

On the stereo:Calling for Vanished Faces: Current 93
Posted by Johanna GGG at 18:05