PPN: Of birthdays, farewells, and noodles 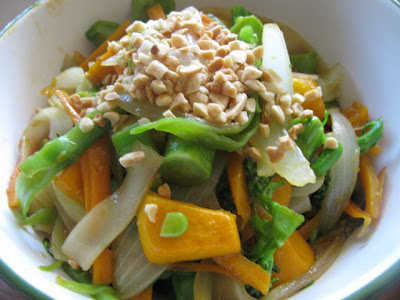 Today we welcome autumn in the Southern hemisphere. A time when change is foremost in my mind. The days are cooling and darkening. The past week seems full of more than its fair share of farewells. Sylvia is learning to wave goodbye. She smiles as her little chubby hand flops about without much control. She hasn't yet learned the sadness of farewells. But at least she knows the comfort of noodles served with lots of vegetables. 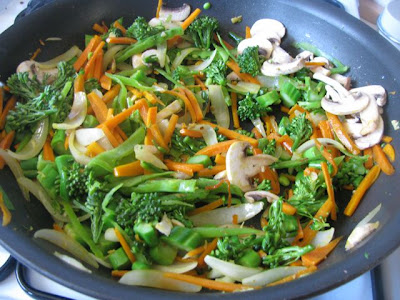 The most important farewell last week was a bittersweet one. We celebrated Sylvia's birthday and said goodbye to the her first twelve months of rapid development and moved into her second year. She is also now able to clap her hands and laughs with joy at what her hands can do. A birthday at the change of season is not a bad thing. It means celebrating at a time when we have had enough of the heat (and sunburn) of summer and welcome some cool weather. This summer, however, has not been overly hot. Yet I still feel glad we will be having more baking weather.

I will also be glad to see Sylvia move further away from the days of chewing anything in sight. Last week she drooled over my camera cord so much that I can no longer use it to download photos to the computer. I found out that it is not easy to replace such cords so I am now using a card reader. I guess I will get used to it, like all changes. 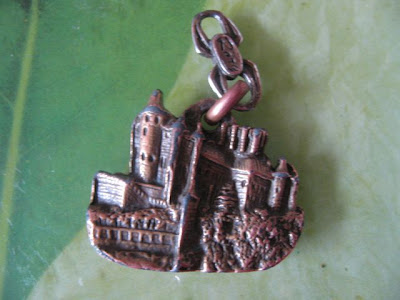 It was also a week to find out that Tart n Round cafe is closing today, that wonderful trendy grocery store on Lygon Street (where the Vina Bar was) called Two Prickly Pears has also closed, and to see that the VeganCowGirl blogger is riding into the sunset. Then my lovely Alcazar keyring that I bought in Segovia, Spain fell apart. All will be missed. Tart n Round goodies will be still sold elsewhere but I don't know where I will now find Herbie's beetroot powder (other than online). Even at work we launched a new organisation in line with a new round of funding that will mean the end of the research centre that intially employed me some years ago. 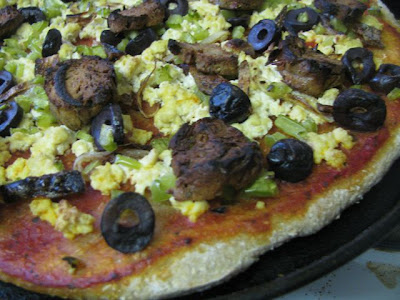 As for the eating plan, we didn't do too badly. Pizza Monday sort of worked. The yeast in my frozen pizza dough seemed to have done its own farewell as the dough did not rise. The pineapple was past its best. But we enjoyed the vegan cheese and sausage toppings. We had salad and rice and pasta but not necessarily on the days in the plan. 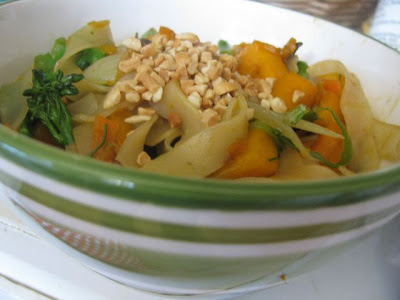 Noodles featured this week. I tried a new recipe for the flat pad thai rice noodles on the weekend. I love these noodles in Pad Thai but it seems too overwhelming some nights so I loved this simpler recipe. It has those dry almost rubbery noodles that are so comforting and lots of flavour. I didn't soak the noodles, which extended the preparation time needed. 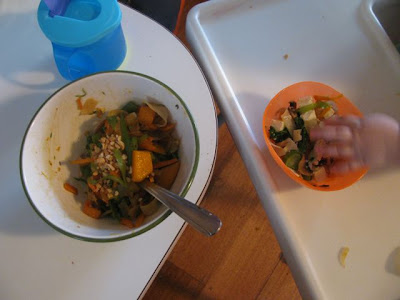 I made this dish again on Sylvia's birthday. They worked much better the second time around. I had wanted a meal we could eat together at the table and that all the family would enjoy. Sylvia's first food was rice cereal and she loves noodles. I tried to put a lot of her favourite things in it - tofu, carrot, pumpkin and broccolini. We all enjoyed it, though E wanted some of Sylvia's tofu but there wasn't much left. The birthday girl got the tofu and we had chopped nuts. 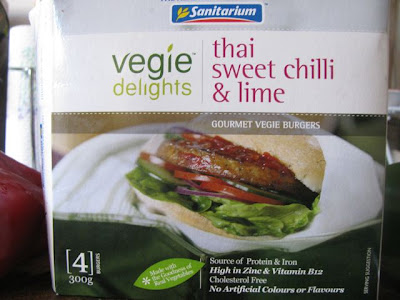 I had been inspired to make thai noodles because I had bought some Thai burgers. I wont horrify you with the charred grilled burgers that I served with the ginger noodles on the first night. But I will share the other noodle recipe that I made last week.

I had been idly browsing through a freebie box of recipe cards from The Age newspaper that I had found in a pile of papers. As E commented when he saw the recipe card, was I really going to make Thai Chicken Salad. Not on your nelly! But I liked the sound of the dressing and decided I could use the burgers instead of chicken. No relation to chicken at all, but substantial enough to take its place. 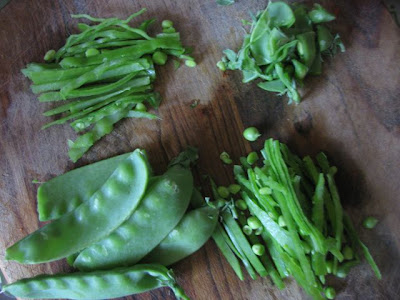 Then I chopped up lots of vegies. Above is a picture of how I like to cut up snowpeas for such Asian salads. Many more vegies than the recipe called for but just the sort of colourful concoction I love.

I am so often intimidated by Thai recipes but this one had ingredients I have about the house. Fish sauce was a prominent ingredient. Many moons ago Lucy had suggested umbeoshi or plum vinegar so I tried a combination of tamari and umeboshi plum vinegar. I went vegetarian before fish sauce became fashionable so I am not familiar with the taste but I loved this dressing. Of course I couldn't resist calling it Thai Tricken Salad. 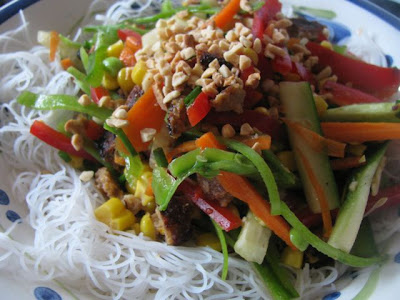 We served it on rice vermicelli noodles but it would be just as good on rice. However last week the rice dish we had was a variant on Rice and Beans. It gave me a chance to use some of the huge tub of olives that E bought and the roasted pumpkin I made with the large pumpkin I bought. 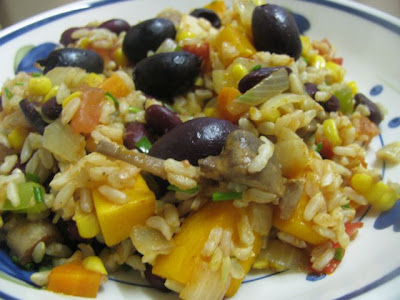 I am sending the Fried Ginger Rice Noodles to Ruth from Once Upon a Feast for Presto Pasta Nights (number 153). This is a special week because it is three years ago that this inspiring blog event was started by Ruth. Three years is along time in the blogosphere for bloggers to be sending pasta dishes to Ruth and all her guest hosts. I am constantly amazed at the interesting variety of all types of pasta on display. I encourage you to check out the PPN website. Congratulations to Ruth and all her hosts on a great achievement!

Making dressing by lightly whisking all ingredients together. If using tofu, marinate in dressing as much as overnight or as little as 30 minutes (while you chop vegetables). Then drain and grill (broil) or fry until golden brown. If using Thai burgers, cook under the grill until golden brown. Chop burgers into small cubes.

Place all vegetables in a medium salad bowl with tofu or burgers. Toss together with dressing. Serve sprinkled with chopped nuts.

Mix together the tamari, mirin and ginger juice mixed in a small bowl ahead of time. If you are using tofu, marinate it in the mixture as long as overnight or as short as just before you start cooking the dish.

Heat a frying pan or wok on a medium heat and add the oils. Fry the onion, carrot, garlic and ginger for about 5 minutes or until the vegetables are almost soft.

Meanwhile soak noodles in boiling water for about 5 minutes until soft or as directed on the packet.

Add the mushrooms, snowpeas and broccolini and tofu (if using). Stir for 1 minute. Then add drained noodles and ¼ cup of water. Cook for a few minutes until water has almost evaporated. Stir in pumpkin.

At this stage if you want your dinner less seasoned for a baby add a little of the tamari mixture to season to taste and then remove baby serving. I added just a little tofu for Sylvia at this stage as she did not get any nuts on her baby helping and I didn’t have much tofu.

Add remaining tamari mixture to frypan and stir for a few minutes until most of this has evaporated. Serve in bowls and sprinkle with chopped peanuts and spring onions.

On the Stereo:
The good, the bad and the queen – self titled