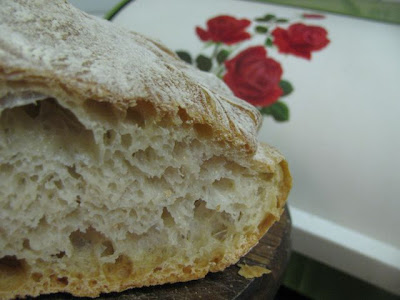 Yesterday I went to a cafe where I found I had forgotten my purse upon paying (fortunately I had some extra cash on me), then I went to a shop that only took cash and I only had plastic, then I went to the supermarket which didn't have the key ingredient (paneer) that I needed so I went to an Indian grocery and ended up buying takeaway Indian curries for dinner. It was just one of those days! But at the end of the day I produced a piece of our heater from my cleavage and a wonderful loaf of bread from the oven!

I hadn't got myself organised to post anything on International Women's Day but I believe it is an important day to remember. Too many people I meet talk as though the feminist struggle is over because it is not longer relevant. Yet our foremothers' rallying cry for 'bread and roses' is as meaningful as ever.

As daughters, friends, wives and mothers, we are still treated different to our menfolk. These days rather than having a choice between being Damned Whores and God's Police we are expected to both provide the bread and smell the roses. We are still socialised into our roles very young. Even when we are aware of trying to avoid our daughters becoming girly girls, it is hard to avoid the pull of gender stereotypes (sorry Sylvia). 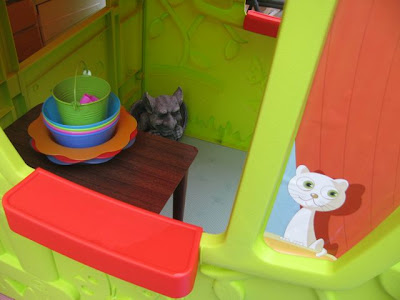 So it is that in my house that, although I refuse to do all of the cleaning, I do most of the cooking. The simple reason is that I love it and I love eating well. So I was excited to finally be inspired to bake the famous No Knead Bread after seeing Katie's post on her version. It is a bread that I see every now and again in the blogosphere, but apparently first was quite popular on blogs after the New York Times published the recipe. Last night I told my mum I was baking it. Oh yes, she told me, it was very popular in the 1970s. I asked if she had tried it and of course she had. Sometimes it does seem that everything is derivative.

Never mind who originally started posting or publishing or passing down the recipe, it is fantastic. It gave me the most professional looking loaf I have ever made. Lots of airy holes. So many in fact that when I first cut a slice there was a little fffst of the air escaping. E loved the bread because it was light like a good fresh ciabatta rather than dense and heavy. More importantly for busy women today, it is a forgiving recipe that is happy to fit around life's crises. 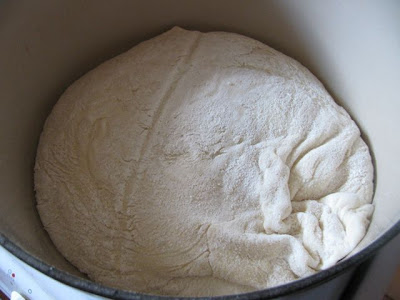 I have copied the recipe from the times below almost verbatim, which I don't usually do, but I have included many notes about my experience making the bread to personalise it, and to share what I did for anyone else who is intimidated by this recipe. It is a simple recipe but if you want more flavours, you could check out the no knead recipes in the Vegetarian Times magazine in Feb 2010. I intend to do so as soon as I can find the time and energy.

I had intended that I would buy a lovely red rose and photography my bread with it to symbolise bread and roses but my good intentions amounted to nothing as I struggled to tick just a few things off my list. However I found some red roses painted on my retro bread bin (which you can see in more detail here). So you can see my photo of my bread and roses.

You may be wondering why this reference to bread and roses. As I was baking the bread, the song 'Bread and Roses' kept coming into my head. I first encountered it when I was in the Trade Union Choir many years ago. But more recently it is a song that I have enjoyed singing to Sylvia and she has often gone to sleep hearing this song. 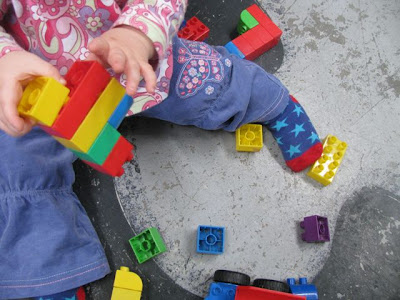 It is a song that is uplifting, lyrical and has a stirring social conscience. The song begins "As we come marching marching, in the beauty of the day / a million darkened kitchens, a thousand mill lofts grey / are touched with all the beauty that a sudden sun discloses / the people hear us singing, bread and roses, bread and roses." Every time I hear it, it still sends a shiver up my spine. It was written (by a man called James Oppenheim) in 1911 and is often associated with a 1912 textile workers strike.

I had also thought that the picture needed some purple and green (the colours used by our foremothers to represent feminism). I was pleased to see there was green on my bread bin and the rose leaves but no purple. So Sylvia helpfully has supplied this post with some purple. Aren't her new little purple trews gorgeous (from her Scottish great aunt Bridie and great uncle Frank for her birthday). This photo is of her playing with lego at the Court Jester cafe yesterday where after refusing some of my plum jam on toast, she enjoyed sampling vegie burger, tomato and sauerkraut on burger bun, pickled gherkin and sour cherry pierogi.

There are lots more things that I could tell you for International Women's Day but already another day has whizzed by and I must away. So I will finish with a word of hope that our little Sylvia grows into a woman that we can be proud of and one who will enjoy bread and roses whether from her own kitchen and garden or not! 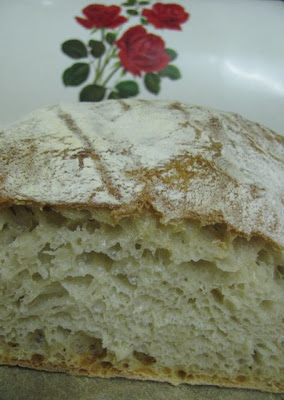 No-Knead Bread
Adapted from the famous New York Times recipe (8 November 2006) that was based on a recipe by Jim Lahey, Sullivan Street Bakery
Time: About 1½ hours plus 8 to 20 hours’ rising 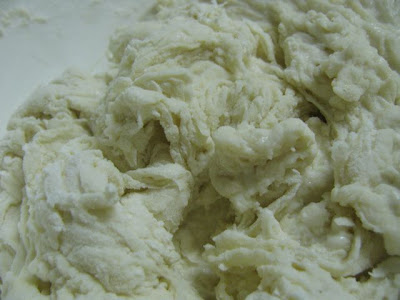 Step 1. In a large bowl combine flour, yeast and salt. Add 1and 5/8 cups of water, and stir until blended. The dough will be shaggy and sticky. Cover bowl with cling wrap and rest dough at room temperature until the surface is dotted with bubbles. 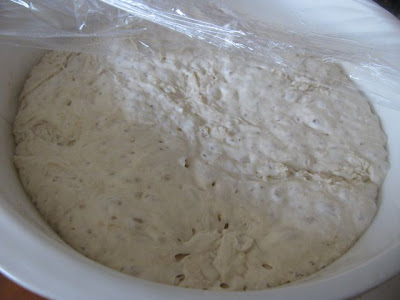 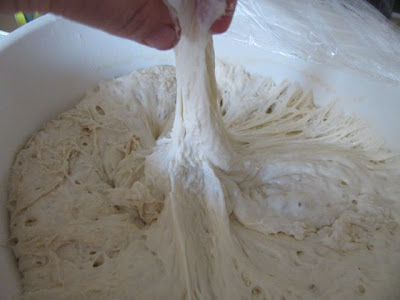 Step 2. When bubbles appear, lightly flour a work surface and place dough on it; sprinkle it with a little more flour and fold it over on itself once or twice. Cover loosely with plastic wrap and let rest about 15 minutes. 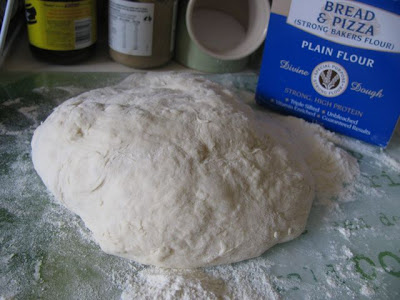 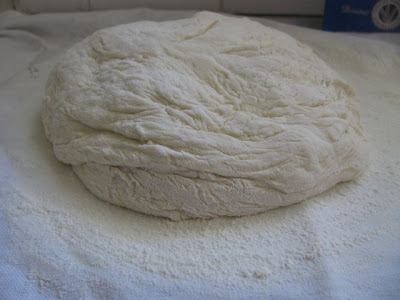 Step 3. Using just enough flour to keep dough from sticking to work surface or to your fingers, gently and quickly shape dough into a ball. Generously coat a cotton towel (not terry cloth) with flour, wheat bran or cornmeal; put dough seam side down on towel and dust with more flour, bran or cornmeal. Cover with another cotton towel and let rise for about 2 hours. (I did 3) When it is ready, dough will be more than double in size and will not readily spring back when poked with a finger. 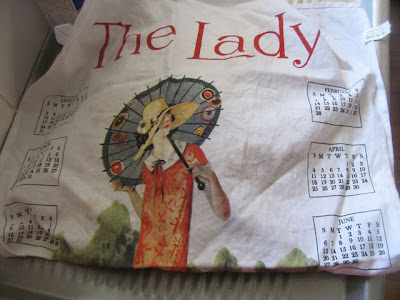 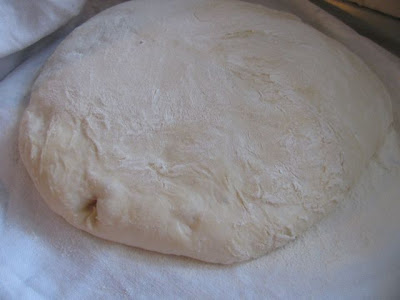 Step 4. At least a half-hour before dough is ready, heat oven to 450 230 degrees. Put a 6- to 8-quart heavy covered pot (cast iron, enamel, Pyrex or ceramic) in oven as it heats. When dough is ready, carefully remove pot from oven. Slide your hand under towel and turn dough over into pot, seam side up; it may look like a mess, but that is O.K. Shake pan once or twice if dough is unevenly distributed; it will straighten out as it bakes. Cover with lid and bake 30 minutes, then remove lid and bake another 15 to 30 minutes, until loaf is beautifully browned. Cool on a rack. Yield: One 1½-pound loaf. 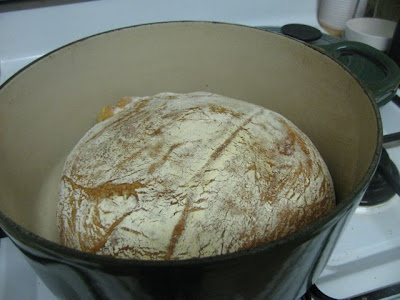 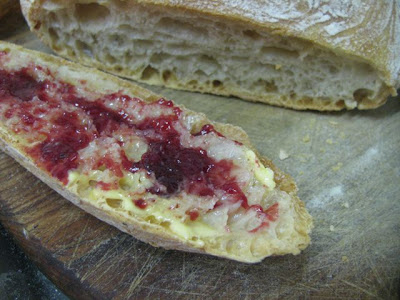 PS Oops - forgot two things when writing this post last night. I had meant to mention I was sending this to Susan for Yeast Spotting. I also meant to tell you that the heater part, which I mentioned at the top of the post, came from Sylvia who loves to sit and dismantle the vents. I figured that you probably guessed this.

Update 19/5/2010: my mum and I have both been making this bread since my first time. We have been using a smaller diameter dish to cook it in (I use a ceramic casserole and my mum uses glass) - it sometimes comes out a little damp but is still wonderful toast. I wonder if this is because it needs more time to cook through when a higher loaf. I have tried it with a little wholemeal flour instead of white bread flour and this works well. I have also found that using wheat germ instead of flour to dust the tea towel gives a lovely malty smell to it.

On the stereo:
Works, Volume 1: Emerson, Lake and Palmer