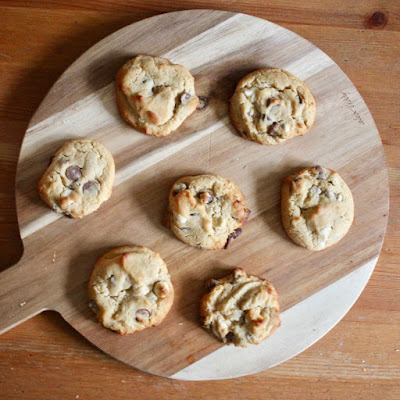 Reorganising our home seems to be an ongoing project. Every now and again it gets a new burst of life with a visit to Ikea. Just a few weeks ago we went to Ikea and bought a flat pack cupboard. E put it together over a couple of days. I made some condensed milk choc chip cookies for him as a reward for his work. 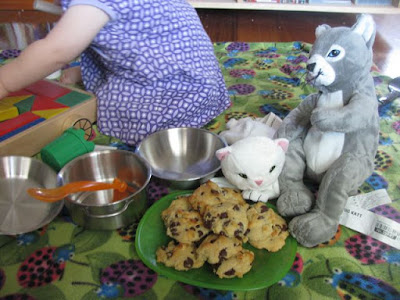 We find it hard to go to Ikea and not be tempted by bits and pieces. In fact, one piece of the cupboard was missing and I had to return today to buy this $4 item and found myself with quite an armful of stuff we needed. I saw a woman queuing at the check out with only one item and I admired her self-control. We just can't resist a gloomy grey cat or a kiddie saucepan set. 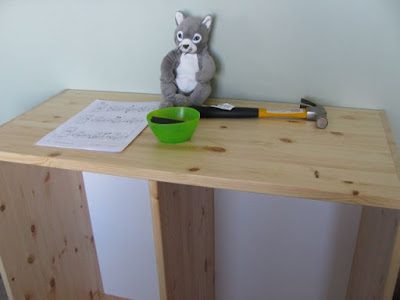 In a similar way, I can't resist a new choc chip cookie recipe. Despite a book dedicated to choc chip cookie recipes, oodles of bookmarks and recipes copied from cookbooks, I still noted the recipe on a condensed milk tin with interest. It was so simple and had no eggs. I first made these quite a few weeks ago when we had a social evening at Sylvia's child care centre. It seemed a good recipe to have in reserve in case my plum muffins didn't work. The child care centre is not only nut free but also egg free as many children seem to have allergies. 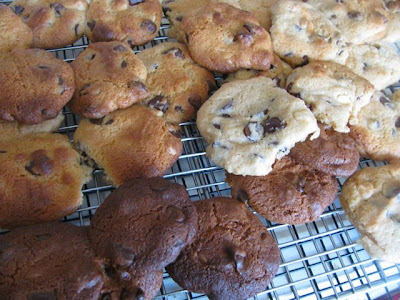 In the end, I was glad the muffins worked out because I got a little distracted while the cookies were baking. I had foolishly decided not to put on the oven timer for the first batch because Sylvia was sleeping and you can see the result. When it came to the second batch I didn't want to repeat my forgetfulness and so I used the timer. Sylvia slept right through. I try not to tip toe around her too much when she is sleeping, but some days I just don't want any excuse for her not to sleep.

These cookies were a bit like the little girl who had a little curl right in the middle of her forehead - when they were good they were very very good but when they were burnt they were horrid. We managed to save some of the less burnt ones by crumbling them over yoghurt and raspberries that had a drizzle of maple syrup added to them. I can highly recommend this rescue remedy. 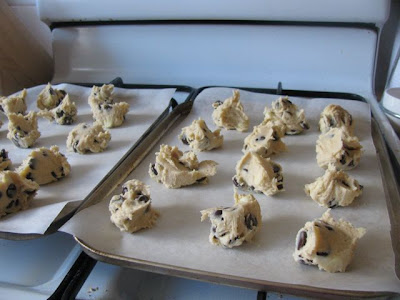 E was also pleased that the cookies didn't go to the social evening. He loved them so much he told me not to worry about dinner, he would just eat 10 of these. They were very moreish and I was glad they could keep well in the freezer so I could keep them out of the path of temptation. 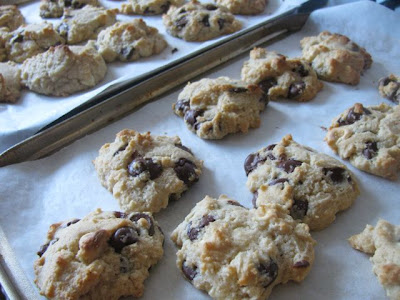 The first lot of cookies that I made had butter and I substituted some soy flour and baking powder for half a cup of the self raising flour. They had a more rounded shape and were chewier. The second time I used Nuttalex vegan margarine. I assume it was the butter rather than the soy flour that made the difference. Both times I found the dough too soft to roll them out and flatten slightly as the recipe said.

This recipe confirms my belief that condensed milk makes everything taste great but I think my next batch of choc chip cookies might see me reverting to one with oats for a bit of texture and nutritional oomph. However given that E loves them so much, I suspect there will be opportunities to experiment with this recipe further.

Beat butter and sugar til creamy (I used a spoon). Add condensed milk and beat once more till creamy. Stir in flour and choc chips til combined.

The mixture will be quite stiff but mine was not stiff enough to roll into balls as the recipe directed. I just dropped teaspoonfuls onto a baking tray covered in baking paper. (I tried silicone mats and found they weren't great for these cookies.)

Bake for 12-15 minutes* or until just starting to colour - err on the side of less cooked here rather than overcooked. Leave on tray for about 10 minutes and then transfer onto a wire rack to cool. These are delicious eaten warm but they keep for a few days and keep very well in the freezer.

Update September 2016 - made these this week and found that 10-12 minutes is probably more accurate for the timing.  Even 12 minutes seem to brown them as much as you would want and as my oven is pretty slow this is probably more than some oven's need.  They only need a little bit of golden brown around the edges to be done. Update 2018 - We accidentally made these with plain wholemeal flour and don't recommend this.  I made another batch and updated the top photo.

On the Stereo:
self titled - Tracy Chapman
Posted by Johanna GGG at 22:03