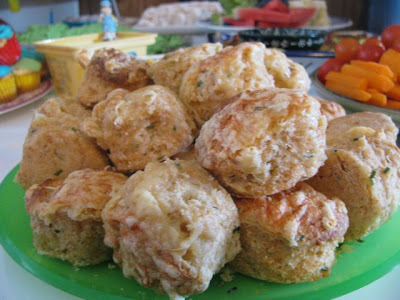 I was pleased that we did so well in catering for the gluten free among my family at Sylvia's birthday party. But there are some foods that I still find difficult to make without wheat flour. Scones are such an easy thing to bake and just pulling out the regular self raising flour is part of that simplicity. So unfortunately I did not offer a gluten free option for the cheese scones.

I confess that they were so good that I would have been happy if my whole family were gluten free and I had to eat them all myself. Of course I am happy to share with them but had hoped for one of two of them to be leftover. After all, I had been inspired to make them for E who had asked for cheese muffins. So it seems I still need to make a batch that will be around the house for him. 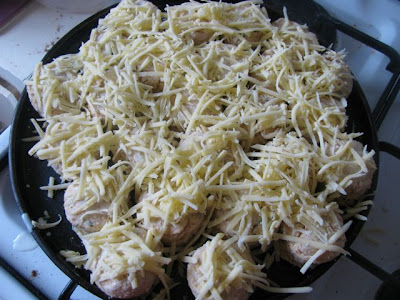 I quite like baking scones for a crowd and had some gruyere cheese in the fridge. With E's request in mind, I was immediately taken by Ashley's Cheddar and Black Pepper Scones. They looked both virtuously wholemeal and indulgently packed with cheese. I started to follow the recipe but felt it had more sugar and salt than I needed. I had a look at Cindy's Gruyere and Pecan Scones, which she says are perfect for an afternoon tea with friends. Her recipe had no sugar and a quarter of the salt that Ashley used. I added some seasoning and would use smoked paprika again but am not sure the chives were necessary. 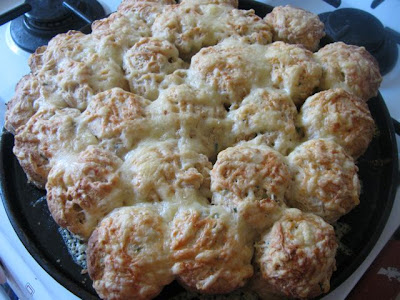 I also couldn't resist Cindy's scattering of cheese over her scones. Gruyere is always great when it melts and crisps up. I chose to cut out small round scones and cluster them together. One of the problems with the method is that the outside ones seem to cook quicker than those in the middle.

My parents arrived just as I took the scones out of the oven. They looked ok but I thought maybe the middle ones could cook a bit more. My mum and I had a taste and decided they were a little doughy so I put them back in the oven for another 5 minutes. It was a good decision. They went straight from the oven into a teatowel until we were ready to serve them with butter. 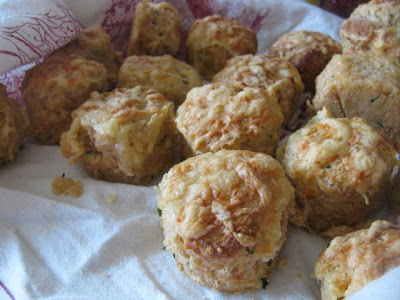 As I said, the scones went down very well. They were so good they could have been eaten warm with no spread but they were lovely with butter melting into them. I would even like a bit of jam on top. Scones warm out of the oven are always welcome and just the thing for any afternoon tea.

Gruyere Scones
Adapted from Where's the Beef and Eat Me Delicious
Makes about 24 small scones
Preheat the oven to 230 degrees C (if your oven is an old one like mine) and lightly grease a baking tray.

Place the flours, chives (if using, spices, salt and 100g grated cheese into a large bowl. Add the butter and rub the butter in with your fingers. (I think it was quite clumpy, especially as I used warm soft butter rather than cold hard butter but don't try this at home if you are wise!)

Now the recipe said to add a cup of buttermilk and add more if needed. I thought it looked dry and added the full 1½ cups. My resulting dough was quite soft, which might be why it needed a bit longer. Use a butter knife to gradually incorporate the milk into the flour mixture. The butter knife is to stop you overmixing so just mix till it comes together.

Scrape the dough onto a flour board and gently knead just until it becomes a smooth ball. Roll out with lots of flour to about 2cm high (or maybe 1½cm). Use a floured scone cutter to cut out circles and cluster on the greased tray. (You could also make it into a round circle and mark wedges with a sharp knife.) I lightly brushed the scones with buttermilk and scattered with the remaining cheese.

Bake for 15-20 minutes until the cheese is golden brown on top and the scones are golden brown on the bottom. Wrap in a teatowel until you are ready to serve. Break open with your hands and smear with butter and/or your choice of spread. Best served warm on the day of baking.

On the Stereo:
The Early Years: Roxy Music
Posted by Johanna GGG at 22:33