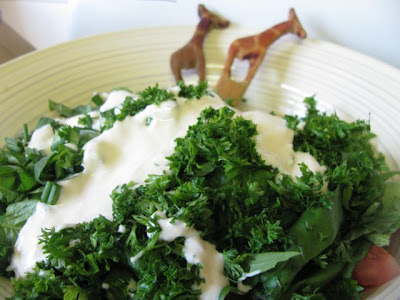 Happy St Patrick’s Day! Some say it is just another day but I say it is a day to wear, eat and enjoy all things green. Having Irish-Anglo ancestors and being taught by an Irish order of nuns means that St Patrick’s day was always significant when I was growing up and it is especially significant now for my sister and her family who live in Dublin!

One of the dilemmas about St Patrick's day food is that Irish food is not particularly green. Potato, cabbage and stout are not the greenest of foods. So the days seems to present an awkward choice between eating Irish food or green food. Today I will have the best of both worlds by posting some recent green salads and making an Irish dinner that I will blog later.

Today’s salads have lots of spinach and herbs but they actually were inspired by Lisa and Jacqueline’s monthly vegetarian soup and salad event, No Croutons Required, which is focused on chickpeas this month. I share Lisa’s love of chickpeas. The hardest thing about this event was choosing from lots of ideas. I tried three ideas. The first was inspired but didn’t quite work, the second gave me a chance to try an unusual ingredient and was very good but my favourite was the ad hoc salad I made last night. 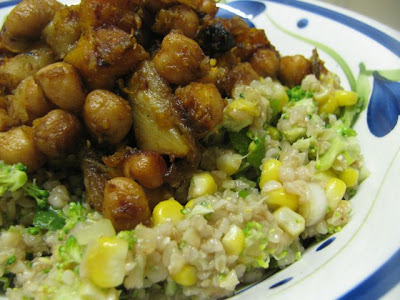 So let’s start at the beginning and let me tell you why the first salad didn’t work. I decided to make salad with cracked wheat because I was clearing out bags of grains that the weevils were eager to share. It was bought for recipes requiring kibbled wheat and I have always been a bit confused about if it is the same as bulgar wheat. I think it is but is a coarser grain. So I boiled it for about 15 minutes, added some vegetables and dressing but it didn't have enough flavour.

What was best about the salad was the panfried chickpeas, fresh pineapple and microwaved pumpkin in olive oil with a tablespoon of balsamic vinegar thrown in at the end. It was tangy, sweet and delicious but E didn’t like the pineapple.

Then I saw a recipe on Cookin’ Canuck for Spinach Salad with Fuyu Persimmon, Jicama & Avocado with Miso Dressing. I had just bought a couple of persimmons without really knowing what to do with them or even what sort of persimmon they were. 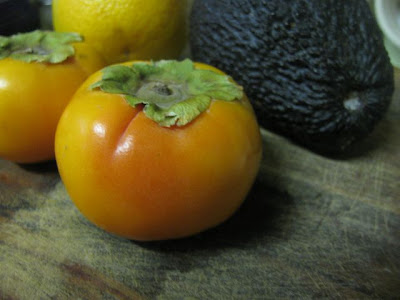 I know that Susan had a useful persimmon post at Food Blogga so I went there and found I had bought fuyu persimmons – the shorter squat ones that can be eaten firm or soft. I once ate an unripe Hachiya persimmon that a work colleague brought in from his tree and I swore never to go near the fruit again but fortunately I have found that fuyus are more friendly and don’t need to be soggy ripe to eat them. Susan also gave a great harvest salad recipe with a great orange dressing that I decided to use. 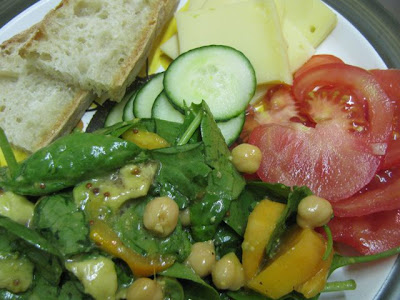 So I had persimmons, but there was no chance of finding jimaca and I had to find a ripe avocado. I have taken to going to the Vic Market more often, now I am back at work so was able to find ripe avocados, though it is always a bit hit and miss till you open them. The one I bought was ok but no great so I only used half of it, which was probably enough. Instead of jimaca, I used chickpeas. E surprisingly said that he liked the persimmons more than other fruit I put in salads. I actually think it was because the dressing was so good. We ate it with no-knead bread, cheese, tomato and cucumber. A fine simple supper. 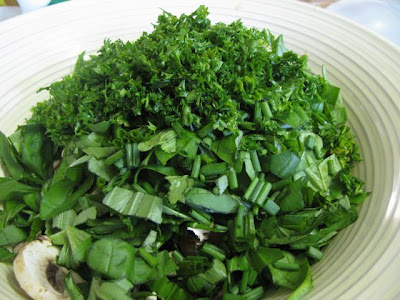 Then last night I decided to make salad with what was in the fridge. Chickpeas, pumpkin and spinach with a simple tahini/lemon/yoghurt dressing is a favourite combination. So the salad was based on this with a little extra thrown in. It was one of those salads that just come together into a great meal more through intuition than planning. I loved this one and didn’t even need any bread with my meal. It occurred to me that this would be a good combination to bake in the oven with some spaghetti and a little tweaking of the dressing. 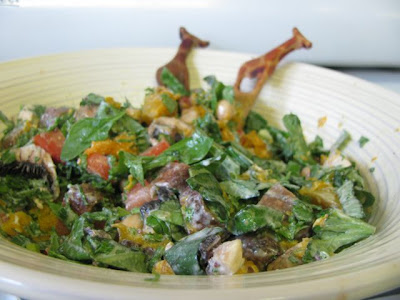 Sylvia has been quite grizzly lately – a combination of teething and missing me while I am at work. I sat with her on the floor while I ate my dinner and she had a few bits off my plate – she loves the chickpeas and the sausage. The highlight of the meal was when she took her first step unaided. Being a foodie baby, her first step was reaching out for a piece of bread. Then she reverted to crawling about on all fours. But it is all the proof that I need that this salad will fill you with energy and put a smile on your face.

Arrange salad on shallow salad bowl. Lightly whisk the dressing ingredients together in a small bowl and drizzle over the salad. Toss and serve.

Chickpea, sausage, pumpkin and greens
serves 2-3 as a main meal