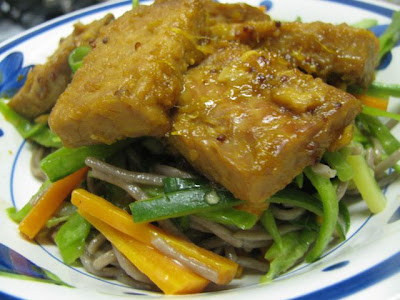 At the moment it feels like there are not enough hours in the day. I don't make as much food as I plan to, I struggle to find time to post on this blog about this cooking, and I don't find the time to comment on other blogs as much as I want. But once I do visit other blogs, I find myself sucked back into the world of wonderful foodie ideas that I must try and the cycle of cooking, posting and visiting blogs begins again. One blogger who often inspires is Heidi of 101 Cookbooks. I found myself adapting and pairing her recipes last week. 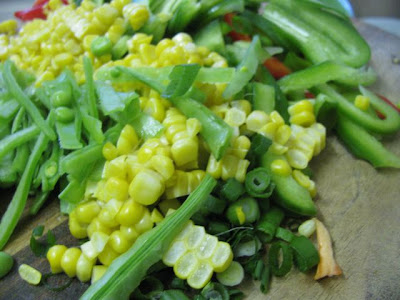 I had some buckwheat soba noodles that I had bought to make a quick salad for the recent potluck. A few days after, I had a chance to make the salad. There are many soba noodle salad recipes on the web but as so I often happens, I found myself drawn to one of Heidi's recipes. I love her flavours but often add more vegetables. 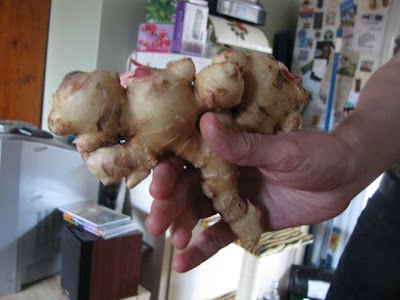 I made the salad one night after work. When I have been working all day Sylvia can be very clingy. So on this night I gave her a cuddle while instructing E on making the dressing. He had lots of fun being Captain Kirk playing with the ginger Phaser. (I had to check this on Wikipedia and couldn't believe the huge list of Star Trek weapons.) He was less enthused at measuring out honey. Sylvia was then calm enough for me to get the vegetables together and tweak the dressing. It was very spicy and I later wondered if E had put in enough honey. 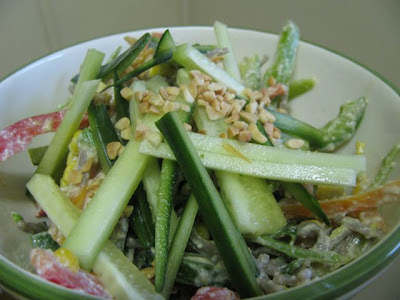 I enjoyed the salad that night but I think I loved it even more the next day when it has sat overnight in the creamy dressing. Being cautious I had only added tofu and tahini to half the dressing and boiled up half the soba noodles. The next night I chopped more vegies and cooked more noodles. It was equally good with the dressing, without tofu and tahini. 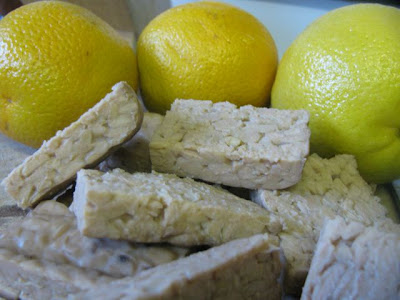 I liked Heidi's suggestion of pan frying some tofu for the salad. But I had a slab of tempeh in the fridge that I had bought with the intention of revisiting a Heidi's Orange Glazed Tempeh. I had first made this a few weeks back and it was so good that E said it could fool (or satisfy) a carnivore. It was crispy and substantial and full of flavour. 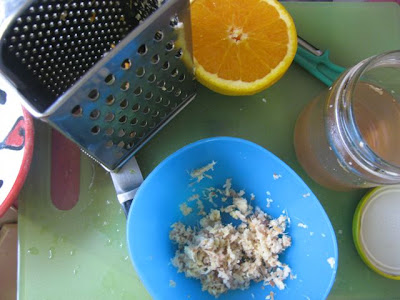 I had meant to serve it with brown rice but the weevils had beaten me to it. So I made a plain basmati rice salad with lime juice and vegetables to accompany it. As I was able to dig in, Sylvia fell over and began crying. I was hungry! So I sat on the floor with her while I ate. 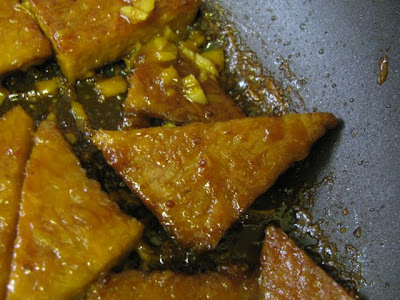 She had a lovely time sticking her hand into the rice and I was glad it was so plain. Maybe she recognised it as being similar to her meal of rice, vegies and beans. I would like to say that she ate a lot of mine but she was more interested in scattering it on the rug. I was more impressed at her steadiness as she stood beside me to reach into my bowl. 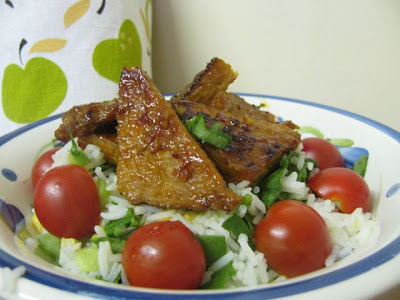 The second time I made the dish the flavours were still delicious but I was a little impatient with the tempeh and didn't fry it long enough to be really crispy. It was nice but not as spectacular as the first time. A good lesson for me on frying up tempeh! I must try it again to do it properly again and remind myself of just how crispy it can be.

I am sending the Orange Glazed Tempeh to Mirch Masala who's hosting this month's My Legume Love Affair, the monthly event focusing on legumes, including soy based products such as tempeh and tofu, which is overseen by Susan of The Well Seasoned Cook.


Make the dressing by whisking together all ingredients in a small bowl. If you chose to use the tofu and tahini it will be quite creamy but should keep overnight after being stirred into the salad. (I had some for lunch the next day and it was fantastic.) We also had a second lot of soba noodles with the dressing without tofu and tahini and that was very good too.

Cook the soba in a large saucepan of lots of boiling salted water until just tender, then drain and rinse under cold running water. I would like to tell you to check the instructions on the packet but my packet didn't actually give a time - I think it took me about 5-10 minutes but I can't remember. I do remember that I used a small saucepan and they really needed to be stirred to separate them once the water boiled and a bigger saucepan with lots of room would have helped the noodles separate. I also put my carrot in with the noodles to cook a for a few minutes.

While the noodles are cooking, prepare the vegies and firm tofu (if using). Heidi cooked her tofu in oil until 'bouncy'.

When noodles are cooked, toss with dressing and vegetables. I kept the cucumber and chopped nuts aside to use as garnish once I had served the salad in bowls.

In a small bowl, place the orange juice, juice of the grated ginger, tamari, mirin, maple syrup, mustard, and garlic. Mix together and set aside.

Slice the tempeh into bite sized pieces - I found that rectangles fit in my frypan easier than triangles although triangles are more pleasing. Heat a large frypan over medium heat and add oil to hot pan.

When tempeh is well cooked, pour orange juice mixture into pan and simmer for about 10 minutes or until the sauce has reduced into a syrupy glaze. Turn tempeh over once during this time and spoon sauce over it to ensure it is well coated. Serve over a grain, such as rice or noodles, and vegetables.