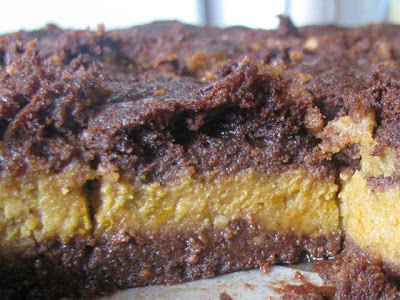 Baking for a cheesy potluck doesn't sound too hard until you hear it is vegan and gluten free. Last Friday, Kristy held a vegan potluck that was to have a cheesy theme but meanwhile she was diagnosed with celiacs and the gluten free theme took over. But there were still a few cheesy dishes on the rugs. My offering was a work-in-progress pumpkin cheesecake brownie. 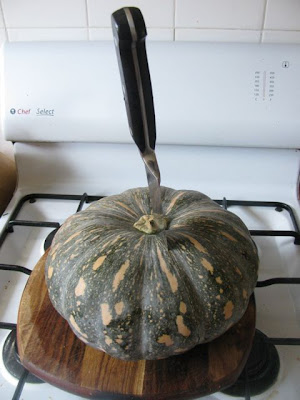 Pumpkin cheesecake brownies is something I have wanted to bake for eons so this seemed like a good opportunity, even if it would not include wheat flour or cream cheese. However, I couldn't find a vegan gluten free recipe so I had to create one by adapting and adjusting other recipes. I was a little nervous about how it would work and did one trial run. 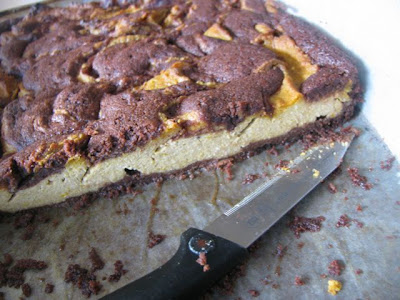 I have had success with substituting banana for egg and besan for wheat flour so I used this tried and trusted wisdom to adapt the brownie part of a pumpkin cheesecake brownie recipe. I found that most vegan cheesecake recipes had tofutti cream cheese in them but I felt that the more processed foods I used, the greater risk of a forbidden ingredient sneaking in. And I was curious about making it from scratch. Ricki had a Vegan Farmer's Cheesecake that was made with tofu and cashew butter. I skimped on the sweetener and left out the lemon juice. Big mistake!

I was glad I hadn't taken this one along. The brownie base worked fine. The cheesecake part was too much tofu and too little anything else. The swirls looked pretty but there was a lot of tofu filling. I would have liked a few more trial runs. However there is only so much dodgy test brownie I can eat through, even if it is relatively low in fat and sweetener. 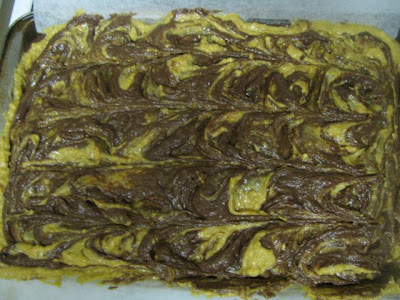 I decided that to try and make a brownie virtuously healthy as well as gluten free and vegan was too much of a challenge. I also looked for more cheesecake ideas. I found a creamy cashew cheesecake on veganbaking.net that involved making your own cashew cream cheese. While that wasn't exactly what I had in mind, I did find inspiration in the use of more cashews and some lemon juice and nutritional yeast. 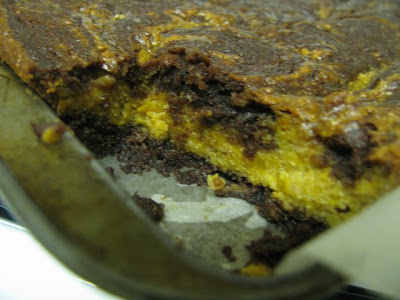 You may gasp in horror at the idea of nutritional yeast in a sweet brownie. I did at first. But one of the questions I kept asking myself in this quest is: what are the flavours in cheesecake that I was trying to reproduce? Nutritional yeast and lemon juice seemed to get me closer to what I was after. I also roasted the pumpkin to give a deeper flavour and less watery texture.

The brownie took forever to cook through the second time. I think the pumpkin cheesecake mixture was too soft and in future would probably add more soy flour (I have amended it from 1 to 2 tablespoons below). The whole slice was soft and crumbly when I cut it and was definitely better for sitting for a day or two. I also need to improve my marbling skills as my swirls still weren't deep enough but were far better than my first attempt. 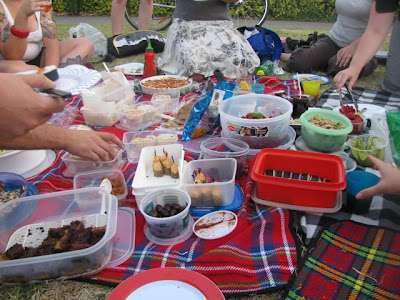 I had intended to also make a soba noodle salad but upon arriving home on Friday night after work (having made my pumpkin cheesecake brownie the night before) I found that Sylvia was in need of my attention. She seems to have cottoned on to the idea that when I go out the front door it might be a long time til I return. (She even howled this morning when I went out to get the paper.) So there was no time for salad and there were tears when I left. 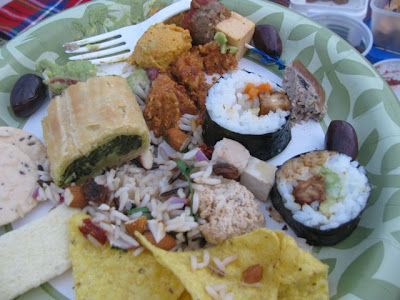 When I arrived at the picnic in Princes Park, the tartan rugs were unfurled on the grass there was a continual stream of people arriving with interesting food in plastic tubs. I thought I would take a photo of my plate of food but there were quite a few additions that required another photo. So much good food. Some of the food you can see on my plate are Steph's sushi and nacho dips, Kristy and Toby's goats cheese, Vicki's spinach rolls, Carla's rice salad, Michael's cheese and sausage cocktails. 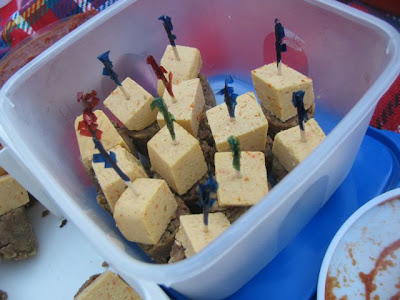 Yes, that's right! Vegan, gluten-free sausage and cheese cocktails! What a classy mix of kitsch and gf/vegan cred. In fact, I felt quite impressed looking across the rug at all the amazing food to think how well one could eat on a vegan and gluten free diet with a little effort. It was also a great learning experience of the sort of foods a diet might include and exclude. I was impressed at the firm little cheese squares on Michael's sticks but also surprised to hear that Chinese five spice is not gluten free. 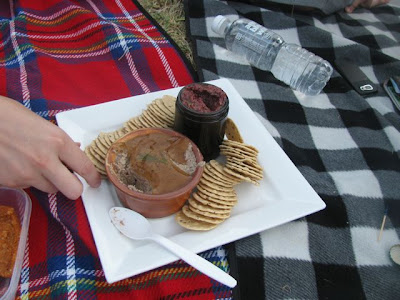 Most people brought their own plates and cutlery but I had some plastic spoons that had been kicking around my house. I used these to put in each dip so that I could spoon a decent portion onto my plate because I was too far away to keep leaning across and dipping into them. One of the dips was the walnut pate that Jo had made. I loved the thin layer of jelly across the top that made it look almost too carnivorously real. But the soft vegan pate was as wonderful as the presentation. (Would love this recipe!)

There were lots of other great foods that I didn't get a chance to photograph, taste or find out who was the creator. Craig's crispy potato cakes were a huge hit (made with besan instead of flour and double fried!) When the crumbed tofu and lots more salads came after I had been digging into the sweet food I had to switch back to savoury. I then went back to the sweet food. I loved Kristy's Iced Rooibos Blueberry Tea especially because I misplaced my water bottle. But I didn't get to taste her blueberry cheesecake ice cream. 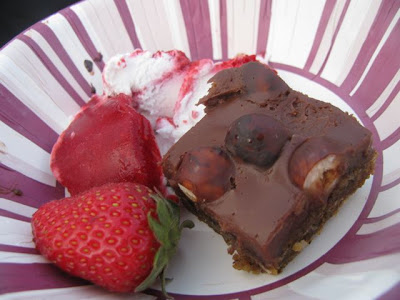 I took even less photos of the sweet food. Being a chocoholic I couldn't resist tasting all the chocolate slices. (I wasn't the only one as I heard someone say in delight that they hadn't had chocolate caramel slice since they went vegan!) My favourite is photographed above and if anyone is posting (or emailing) the recipe I would love to get it. Beside it is Cindy's amazing rasbperry and coconut ice cream. I should have tried the muffins and pear torte but it was just all too overwhelming.

It was a most pleasant evening sitting on the rugs as twilight fell, discussing dodgy doctors, applesauce and knitting, among other things. One of the strange things about such a gathering is being introduced to others as Johanna from Green Gourmet Giraffe - something that would not be understood in any other setting. I have said it before and I will say it again, food bloggers are such great people to spend time with and it is a joy to be able to taste some of the food that I see them posting.

All too soon I had to return home to my little blog orphan who loudly cried to demonstrate her relief to see me home. Or maybe she was just cross that she didn't get to come along and sample the food! I wouldn't blame her! 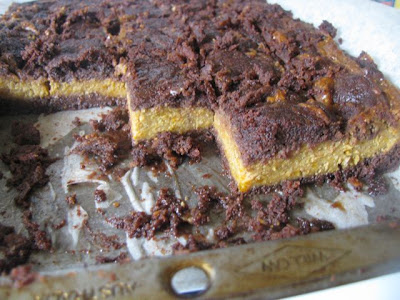 Though it is work in progress, I am sending this recipe to Susan of the Well Seasoned Cook who is hosting Weekend Herb Blogging (#223) this week. The event, coordinated by Haalo and founded by Kalyn is all about featuring interesting ways to use vegetables, fruit and herbs. I think that this is one of the most unusual ways I have even used pumpkin and I hope it might be inspiration for others.
Pumpkin Cheesecake Brownies

To make cheesecake layer: Blend all ingredients in a food processor till well combined. Taste to check for sweetness and flavour. Adjust flavourings if necessary.

To make brownie layer: Beat together margarine and brown sugar in a medium mixing bowl until smooth and sugar is incorporated. (I just used a spoon to do this but you could use electric beaters.) Stir in banana and then add in dry ingredients and stir until combined.

Bake for 40 minutes, or until center is set. (NB the first time it took me 40 minutes but the second time it took 40 minutes plus 30 minutes at 150 C and it still wasn't quite as firm as I would like - which is why it is work in progress. But I think the little bit of extra soy flour I have added to the cheesecake ingredients here might help - or you might even add a little more.) Cool completely in tin. It is best to sit for a day or two before cutting and serving.

On the Stereo:
Hits: Joni Mitchell
Posted by Johanna GGG at 13:50