Panzanella and return to work 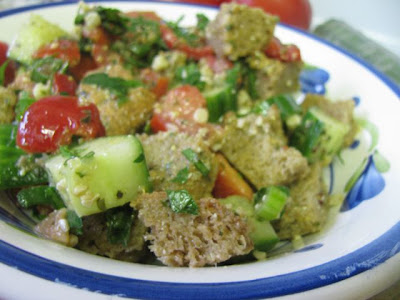 It is now about a month since I returned to work after almost 12 months at home with Sylvia. I have had a few questions about how I am going so I thought I would tell you by comparing it to food. (That is the fun of a food blog!)

Firstly let me tell you how lovely it is to be able to ride my bike to work a couple of days a week. It is hard to find time to ride a bike with a baby and I am much less fit than I was. So it is a joy to fly along the bike paths, past the traffic and the trams where I have sat and gazed upon cyclists in nostalgia.

Like my dad used to say when taking us to his old haunts, I know this place like the back of my hand. If I had been wiser when I was younger I would have reminded my dad that hands develop lines, spots and scars with age. There are a few changes along my route, mostly the improvements of the council. I have changed far more than the bike paths. I am less fit and still need to get my bike serviced properly. But I know where to slow, when to race a train, where the road slopes slightly uphill and where is the best place to turn. 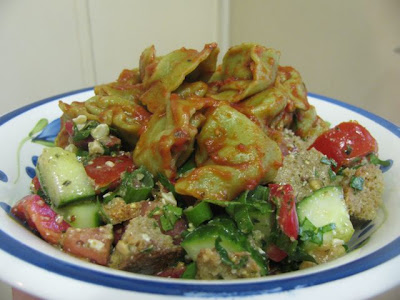 My comfort food, that is simple enough to do without thinking, is pasta and bottled pasta sauce. It is similar to riding home and finding you can't remember a moment of the ride because your mind was elsewhere but the body just ploughed on like a homing pigeon. Just cook the pasta and throw in the sauce. I especially love 'fresh' ravioli, which cooks really quickly. Last weekend I decided I didn't have the energy to cook and would just throw together pasta in pasta sauce. Easy peasy! Of course when you give food to Sylvia it can look unfamiliar. (She ate a few ravioli but wasn't too keen) Then I saw the stale sourdough bread from Andre's and remembered the panzanella I had eaten at Each Peach recently. It is something that I have often seen but never attempted. I felt quite unsure of how much to soak the bread in the dressing. I had a quick look at the internet and found a recipe by Johanna at the Passionate Cook. Not only did it have tomato, cucumber and bread but also pesto and red capsicum. These unexpected ingredients took the salad above the ordinary and made it interesting. Plus they were residing in my fridge, waiting for meaning to be bestowed. 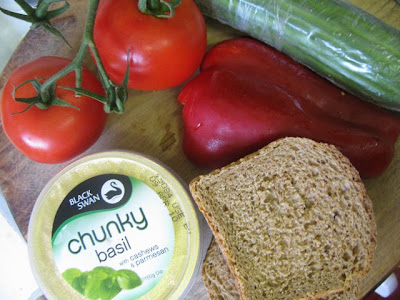 So it is with my workplace. There are familiar ingredients but it is hard to recognise. One would think that a return to work would mean slotting back into place. However my job has continually changed since I started in my research centre about 6 years ago. I still struggle to describe my job. Now it is even more complicated because we are entering a new funding round with our centre's life extended and expanding into an additional institute as well.

You might call it the OWL Institute - as in Only Worriers and Lunatics - ie if you aren't a lunatic you are worrying about the others who are. Though of course everyone thinks they are a worrier and everyone else is a lunatic. Don't they? Seriously though, if you want to find out a little about where I work, you could do worse than to peruse this article. 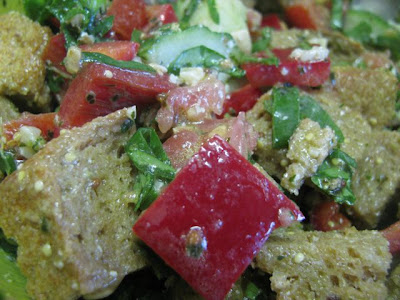 Back to the panzanella, it was wonderful. The bread was rescued with the tart vinaigrette that coated it but it retained a little resistance to the teeth. I felt it was quite an appropriate use for my stale bread. No heating bread on low in the oven to make it take like stale bread. No, my bread had just been hanging about too long and was in danger of being binned. E was a bit less keen on the salad. He liked everything but the bread. I think next time I will serve his without bread. No point in throwing pearls before swine.

The panzanella salad was a wonderful interesting accompaniment to the pasta. However, when I hear the Chinese curse, may you live in interesting times, I prefer an interesting dinner to an interesting workplace. I am sure that work will settle down somewhat over the next few months but meanwhile I hope I will keep feeling inspired about dinner.

I am sending the salad to Susan of Wild Yeast for her weekly YeastSpotting, which features all things yeasty around the blogosphere, even ways of making dishes with yeast products such as bread!

Panzanella
serves 2 as a main course on a hot summer's day
Adapted from The Passionate Cook
For the vinaigrette:
Combine all vegetables in a bowl and pour over the vinaigrette ingredients. Toss well. Just before serving, fold in the stale bread pieces (Johanna says to decorate with fresh basil but I didn't have any on hand).

On the Stereo:
The Best of Emerson Lake and Palmer: ELP
Posted by Johanna GGG at 11:30