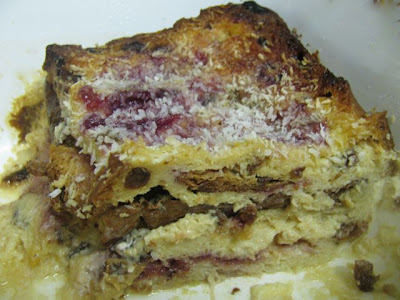 Hurrah for finally figuring out how to put anchors in my recipe index for easier searching! Hurrah for an award from Jacqueline! Hurrah for Sylvia eating smoothies, sausages and sweets! Hurrah for a happy positive start to this post even though I want to have a whinge! 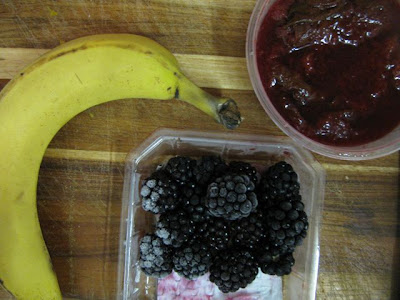 Last night I was planning to write up a post and was waylaid by the idea of putting anchors into my blog index. I found this post helpful for anyone who has also not known how to do it. Life has been busy as usual and so now that I have accomplished the anchors, I would catch up with some photos of good food we have eaten recently and a chat about having a vegetarian baby.

But first I would like to thank Jacqueline of Tinned Tomatoes for her warm words that she sent to me with an award for brightening her day. I have already handed this award around so I will send you back to my recent award post rather than do another one...

....This post has been coming together so slowly (two conferences in a week has left me with far too little blogging time and energy) that I also must thank Ricki for sending me an award. I was delighted to get an award back from two of my favourite bloggers. Both Jacqueline and Ricki have written up fantastic posts full of gorgeous photos, generous descriptions and lots of links to more interesting blogs that I must check out (if I can ever get on top of my backlog!!!). 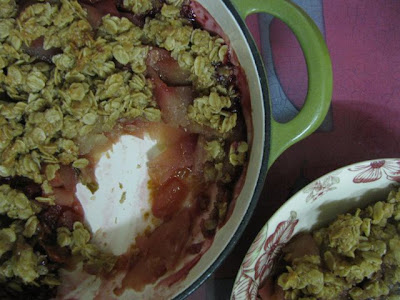 I love hearing little updates on Jacqueline's gorgeous baby Cooper and I know she will be interested to hear about Sylvia. Ricki is very sympathetic about food intolerances and also takes a great interest in my little one so here is a little update for both of them and for anyone else with an interest in rearing a vegetarian baby.

Just before Sylvia had her first birthday we went to the maternal and child health nurse for her 12 month check. She asked me if I had any concerns. I said no. Maybe it was a trick question. By the time I had finished talking to her it seemed I should have many concerns about her diet. The nurse seemed quite horrified that she hadn't put on much weight and was no longer at the top of the chart with her weight despite still being above average weight. In retrospect I wish I had told the nurse that she was my main concern. 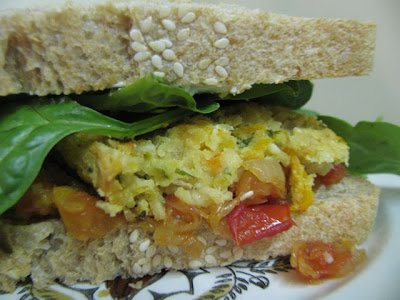 I was made to feel that Sylvia was underfed and in danger of not developing well. But the nurse's irrational approach made me question how concerned I really should be. When I said that Sylvia didn't like milk and in fact I didn't like milk, she decided Sylvia was dairy intolerant. She told me I could try soy milk but I should be warned that she might be soy intolerant because about 50% of babies are. She obviously hadn't been listening when I had mentioned minutes before that Sylvia loves tofu. I came out feeling that the subtext was that my vegetarianism was just whacky and dangerous.

I decided to discuss it with my doctor who started questioning where Sylvia got her iron. Again the implication was that I had to be very careful about her being a vegetarian baby. It was as though vegetarianism is a phase I have been going through (for almost 20 years!) and now it was time to grow up and eat meat. I bought the iron supplement that the doctor recommended and was unhappy to see that the second ingredient was sugar. 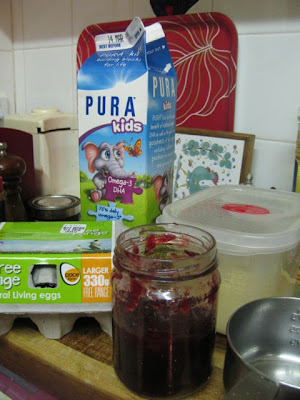 Since then I have been on a mission to try and get Sylvia eating more and in particular more eggs and dairy. I have visited the doctor again who is actually quite nice and seems to think Sylvia is fine. But I resent that these health professionals have honed in on my vegetarianism rather than asking me why I think she might have put on so little weight and discussing with me how I might get her eating more. I am trying to give her more frequent meals as the doctor suggested but there is only so much of my day (and energy) that I can devote to Sylvia's mealtimes. 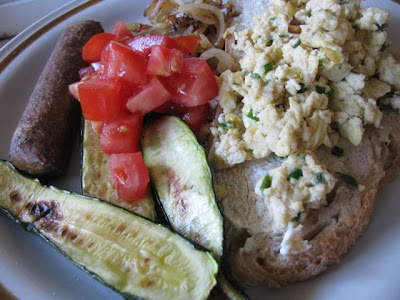 It makes me angry that these health professionals who are meant to support parents bring up their babies are actually making us more paranoid and unhappy. Among my friends I have known people whose babies weigh too little, weigh too much, aren't walking early enough and aren't saying enough words. If they don't fit into a narrowly defined "normal", parents are made to feel there is a problem.

The whole guilt trip for parents starts early with the foods that may be harmful in pregnancy and the midwives with their contradictions at the hospital straight after birth. Thank goodness for the common sense of mother's club chit chat about babies progressing at their own pace and parents ignoring charts based on bottle fed babies. Bloggers can also help to reassure with useful information, such as Sophie's recent post on the benefits of tofu with regards to calcium intake.

Nevertheless, I have been watching what Sylvia eats carefully. We have tried to get her eating more milk and eggs but it is not easy when it does not come naturally to me. E is loving my attempts to make her scrambled eggs - something I would not normally make. Jules idea of adding creamed corn was great. It is a surprise to see that she eats it. 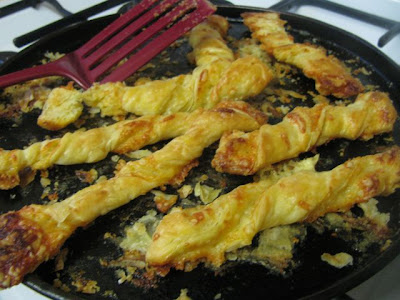 Far easier for me is cheese. I was pleased to see her eating cheese straws inspired by Lorraine - if not as pretty (note to self, remember to use baking paper next time). She has also loved my creamy pumpkin dip on toast, loves vegetarian sausages and has tried some sausage rolls (I tried cindy's vegan version) but refused my adaptation of this lentil loaf. It was a bit dry. Never mind, I loved the loaf in a burger with tomato, onion and sauerkraut inspired by the Court Jester. 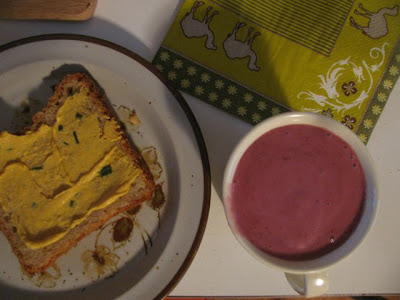 As for milk, the very idea of drinking a glass of a stuff makes me shudder in horror. The doctor suggested smoothies which I love but she was even more impressed when I said that I had made bread and butter pudding. Obviously she expected it to be full of eggs and milk as did my mum when I discussed making it with her. My favourite one I have made to date is actually the very vegan friendly Pumpkin and chocolate bread pudding with no eggs. But I didn't mention that.

I had told my mum that I wanted to put in some of the blood plums I had bought. She thought it sounded too fruity and suggested I use some of my plum jam. I did so because I wanted to make it like my mum had made it for me as a child. Strangely enough I had never thought of it as a healthy food but there you go. I used some panettone that I had been saving to make a summer pudding and the milk I had accidentally bought a day before the use by date. I gave it the full nostalgic treatment of coconut on top and served it with a little milk and sugar like my mum used to. 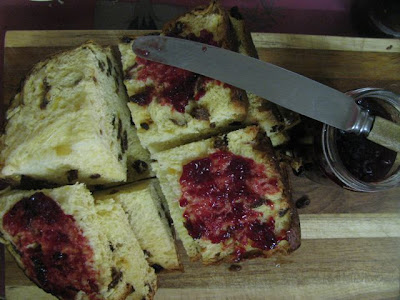 It was delicious. Maybe it needs to be a regular health food in our house. If I didn't have panettone I think a good sourdough fruit loaf would suffice or else plain bread with some butter, sultanas and a little orange zest.

When I said the blood plums had to be used, my mum said she would stew them for me. She was as good as her word. Stewed blood plums also make me think of my childhood. I used quite a few of them in smoothies for Sylvia. The combination is below. It took me a few attempts to get Sylvia drinking them but she has just learned to use a straw and sucking anything through a straw delights her, even smoothies. The rest of the plums went with some stewed apples (thanks again mum) into a crumble like this one that Sylvia also loved. 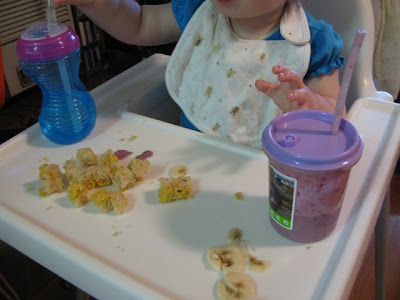 So now that my rant is done, here are a couple of recipes, which are just written as I did them. The bread and butter pudding goes to Susan for YeastSpotting. I don't always have plums and leftover condensed milk and unused panettone in my kitchen but if I did I wouldn't hesitate to make these again, baby or no baby!

Blitz all ingredients in a blender til smooth. Pour and drink!

Spread panettone with plum jam. Layer in a greased casserole dish. Lightly whisk together milk, eggs and condensed milk and pour over panettone. Press down to make sure the panettone soaks up all the milk and egg mixture and leave to soak for at least 30 minutes. Sprinkle with coconut and bake at 180 for about 45 minutes or until top is golden brown and crispy. Sit at least 10 minutes before serving. You can serve it with a smidge of milk and a sprinkle of sugar if desired. It will keep overnight and taste even better the next day - I just heated it in the microwave.