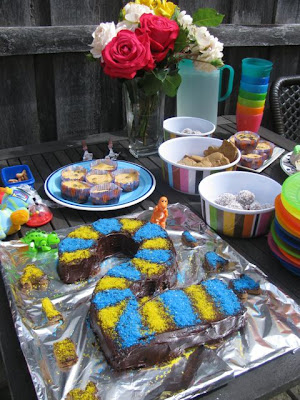 Yesterday we had a small afternoon tea for our second year of celebrating a birthday without our birthday boys. It is not easy when Alex and Ian were stillborn with not a breath of life and we must observe their death along with their birth. I wish it wasn’t so. It is important to remember their place in our family, and even more so with the arrival of Sylvia this year, who was a distraction yesterday but a joyful blessing nevertheless. 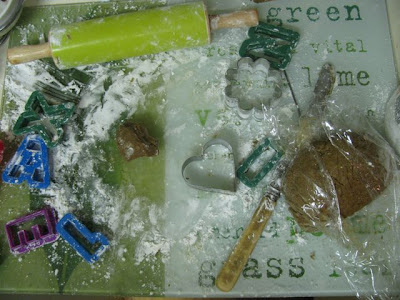 The day before I baked a birthday cake, took gluten free gingerbread dough from the freezer to bake into shapes and made pumpkin cheesecakes. I was glad they were done by the time Sylvia decided not to sleep. She refused all attempts to settle her to sleep yesterday. In desperation, E left a sink full of dishes to play her guitar and then walked her in the pram. Finally she slept in the World War II section of the library. 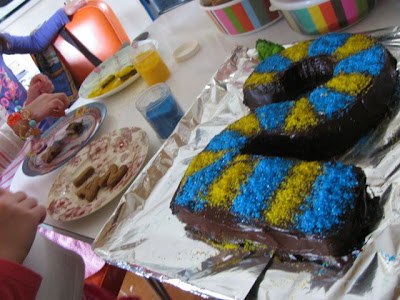 Meanwhile back at home, I began to decorate the cake with less than an hour till the family arrived, half the dishes still to be washed and mess all around me. People started to arrive as I was finishing the cake. I still had to get the gingerbread letters done so my little nieces helped to sprinkle (or heap) sparkles on them for me. My dad helped with the dishes, my sister tidied up Sylvia’s toys and mum busied herself around the kitchen.

It didn’t take long to arrange the food on the table and the chairs around it outside in the sunshine. My mum had brought us a bunch of roses from her garden, including a couple of sweet smelling Alex Red Roses. Maddy and Ella brought along jack o lanterns that they made with my American sister in law Miriam. Sylvia spent most of the time in the stroller in the hope she might sleep more but after a few grizzles she perked up and was wide awake. 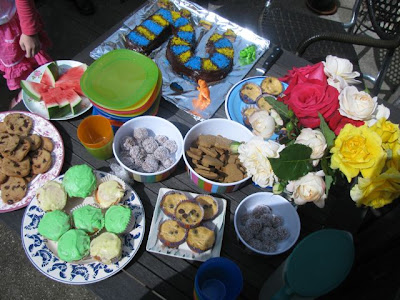 We only have a small unit but the kids kept themselves busy. Cooper took great delight in constantly climbing the three steps to our back door and when he wasn’t climbing he banged on the shed door. My little nieces hopped and skipped and played with Sylvia’s toys and even disappeared inside to pet Zinc who was hiding in the bedroom. Grace found a little green caterpillar on the lemon tree. One of the most amusing moments was when everyone was suddenly quiet and the only voice to be heard was my sister Susie reading to Ella from our Cheeky Little Cats book, saying loudly, “haven’t you heard of an indicator, you mongrel”. 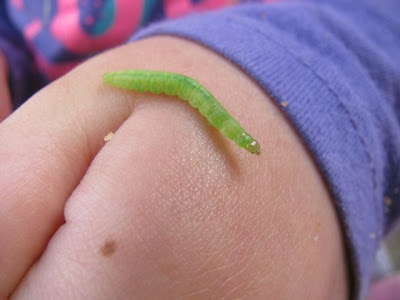 Susie went to a morning tea at work last week where there was no gluten free food so she was unable to eat anything. Yesterday we had plenty of gluten free treats, which meant to I could send a lot of leftovers home with her. My mum brought along some gluten free little cakes and gluten free choc chip cookies. I made grubs with and without ‘gluten’ biscuits. 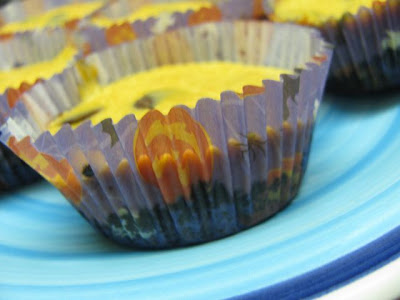 I made some chocolate pumpkin mini cheesecakes. It meant I was able to use some pumpkin and my purple cupcake papers as a nod to Halloween. Doing mini cheesecakes made it easier to cater for gluten free guests. I used oreos for the gluten eaters and made an almond/coconut/soy flour concoction for the GF ones. When I made them, I just used a knife to chop and crush the oreos because I was worried the food processor would wake Sylvia. The GF crust seemed to work ok but I wish I hadn’t melted so much butter for the crust. I loved the cheesecake recipe that I found on Pinch My Salt but I added some choc chips and reduced the sweetness. 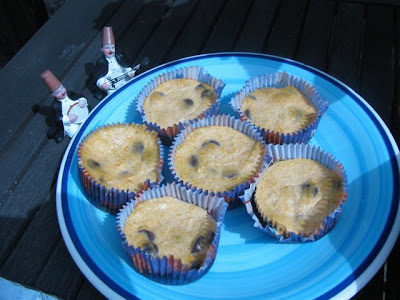 We didn’t need too much sweetness after the cake. I had asked E what cake to make. He wanted some butterscotch so I decided to make a chocolate banana cake and substitute chopped caramels instead of chocolate. If I had butterscotch chips I would use these. I have made this cake a few times before. I thought it was darker last time but it was still soft and delicious especially with dark chocolate ganache covering it. 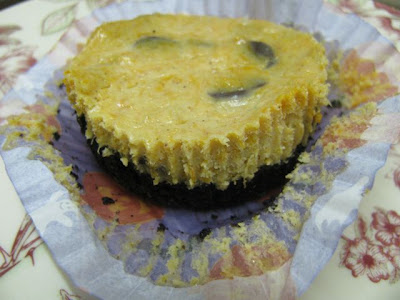 The cake was the only non-GF food in the spread but we made sure that it had a GF element. A couple of weekends ago I tried making some gluten free gingerbread biscuits and took them down to Geelong especially for Susie and Grace. The biccies were ok but E was not keen. I actually liked them the second day when they were softer but they were slightly pasty and were not as chewy and dense as my bush buddies gingerbreads. So I was surprised to hear that after I left Geelong the nieces devoured them. I would like to try them again with a different gluten free flour mix, but I had some of the dough in the freezer to bake another batch. 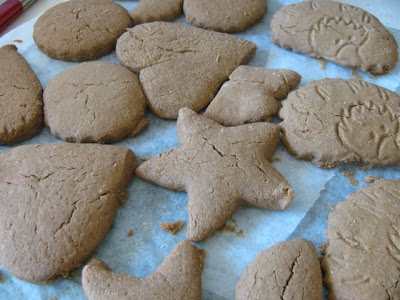 I found a set of number and letter cookie cutters last week. I decided that, rather than making a little GF cake on the side as I often do, I would spread ganache – the best part of the cake – over gingerbread letters spelling Alex and Ian’s names. This gave some fun activities for the kids and something for the gluten free ones to eat. As the cookies are vegan, it would be possible to use vegan cream (like soyatoo) or coconut cream for the ganache and cater for them as well in this way. This batch was a little crispy but the next day when I tasted the ones with chocolate ganache the biccies had softened and tasted wonderful. They were the finishing touch we needed for the cake. 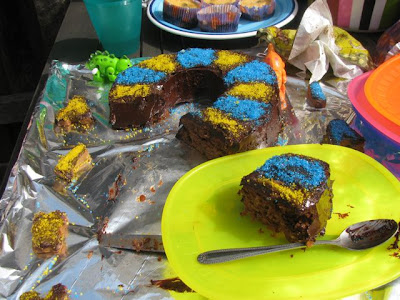 Lastly we had some chunks of watermelon that were popular. I had bought other fruit to put out but didn’t have time to chop it because we were so disorganized. E and I agreed that next time we must have some savoury food because the sweet food was pretty intense after not having a chance to eat lunch. But it was delicious party food that I hope my boys would have loved. 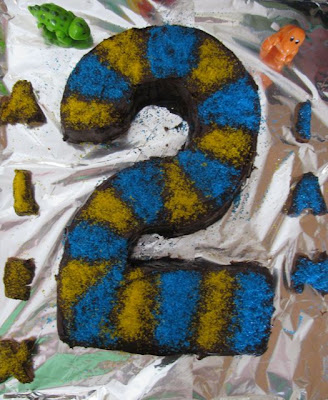 How to Make a Number Two Cake 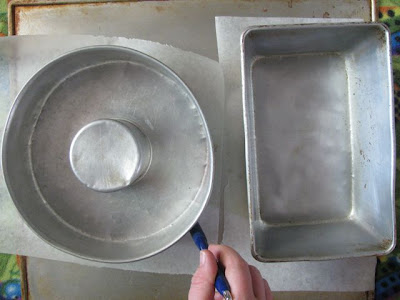 You will need a 20cm ring tin and a 13 x 22cm loaf tin (or a thinner loaf tin if you have one). First make a template using a pen to trace around the tins onto paper – I used baking paper. Cut out these shapes. To cut a hole in the ring tin template fold the circle in half and in half again and again til you have a little wedge. Place wedge against the tin to measure where to cut the end off and when you unfold you will have a ring. (See photo). Arrange as a number two on the tray or plate that you will use for the cake. I used a baking tray covered in foil. 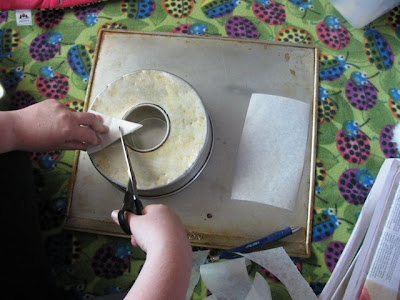 The day before decorating cake, make the cake and cookies using the recipes below to make the letters of names or words you want to display. I like the cake to have sat overnight to make it easier to handle. The cake is quite soft but don't worry if it collapses a little as the ganache will cover a multitude of sins. 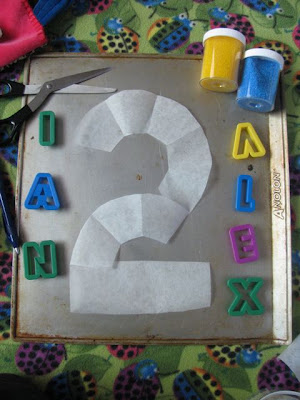 Use the paper shapes to cut and arrange the cake to make a number two. I had to 'discard' (ie eat separately) some of the loaf cake and a little wedge of the ring cake to make the shape right. Spread ganache over the cake and sides but put a few spoonfuls to the side for the letters. Use coloured sprinkles to make stripes along the two. I used a spatula held above the cake to help me keep the edges a bit neat. 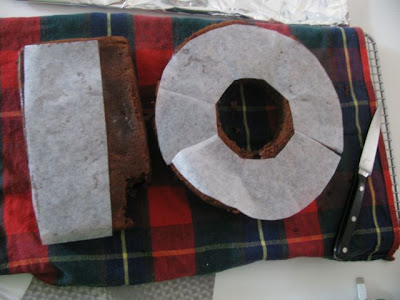 Use the remaining ganache to carefully spread over the letters with a knife and scatter sprinkles over each on a plate. Place letters along the sides to make words. 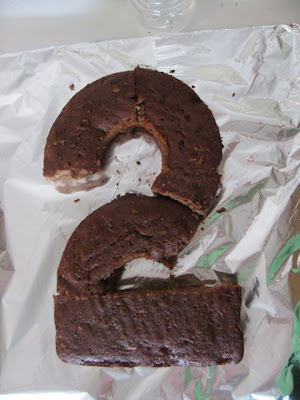 Beat together butter, sugar, flour, cocoa, eggs, golden syrup, 1 mashed banana and 3 tbsp water until soft and creamy. (I did this by hand but you could use electric beaters.) Fold in chopped banana and caramels and spoon into prepared tins. Smooth tops and bake for 30-40 minutes until a skewer comes out cleanly. (My ring tin took 30 minutes, my loaf tin took 40 minutes and when I used a 23cm square tin, it took 45 minutes.) Cool in tin for 5-10 minutes and then turn out onto a wire rack to cool. (NB I found that the cakes stuck to the tin where the caramels had melted so I had to be very careful running the knife around the edge and giving the tin a shake to check it had come away from the sides before turning out.)

Combine margarine, molasses, brown sugar and vanilla til creamy (I did this by hand but you could use electric beaters). Fold in remaining ingredients except water and corn flour. Add water as necessary to make a moist ball of dough. My dough was very very soft so maybe I could have done with less water. Divide dough in half. Wrap each portion in cling film ad chill for at least one hour. It can be frozen at this stage.

Preheat oven to 170 C or 325 F. Line baking trays with baking paper (or silicone liner – I have just bought one).

Liberally dust work surface and rolling pin with corn flour. My dough was really soft (even after the freezer) and I needed lots of corn flour to handle it. Roll dough out to about ½ inch thick (that is what recipe suggests – I think mine were a little thinner but I wouldn’t recommend any thinner than ¼ inch as the thinner the dough the crisper the cookie).

Cut shapes as desired. An eggflip or spatula or just a bread knife is useful to lift shapes onto baking tray. Leave a bit of room for them to expand. Decorate shapes with a sprinkling of coarse sugar or dried fruit or just leave plain.

Bake for about 25 minutes or until lightly browned. Cool on the tray for about 5 minutes before carefully transferring to a wire rack to cool completely. I found they were better after a day or two.

Mix filling ingredients in a medium mixing bowl. Spoon on top of each base, dividing evenly among the 12 muffin cups.

Bake in oven for minutes. Remove from oven and cool slightly then remove from muffin tray and cool completely. Chill in fridge till ready to serve – I chilled mine overnight.