The Wall, Rose Petals and Biscuits 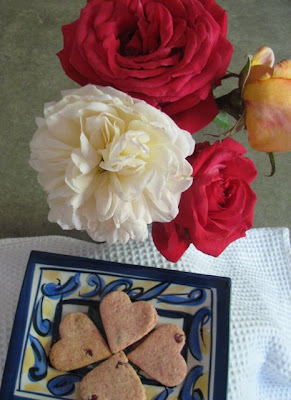 It was the 20th anniversary of the fall of the Berlin Wall yesterday. I was not really interested in politics when it came down in 1989 so it wasn’t a huge event in my life. But I did visit Berlin in 1998 and viewed the remains of the wall including the wonderful “graffiti” on the East Side Gallery. So to celebrate the anniversary, I have a special photo of the weekend’s biscuits with one of my travel pictures and my tacky souvenir of a little bottle of rubble from the wall. 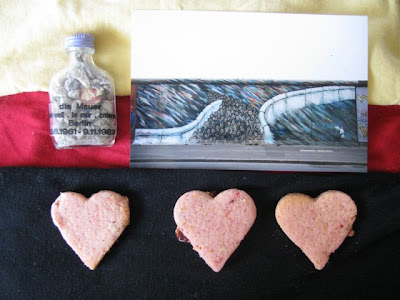 While the world was remembering the fall of the wall, my family celebrated my brother, Dave’s birthday. I went down to Geelong on the weekend for a barbecue and cake. I took down some pink heart-shaped biscuits, which are not really suitable for a boy’s birthday, but I had a yen to try them. They gave Dave a smile anyway.

I saw the cut out biscuits recipe on Cakelaw’s blog a few weeks back and bookmarked it. She used lavender, which I want to try. Then soon after she made the recipe again with rose petals. It was perfect timing as I was looking for ideas for some rose petals I had just purchased. At the same time I bought some beetroot powder and decided to try making the biscuits pink with it. 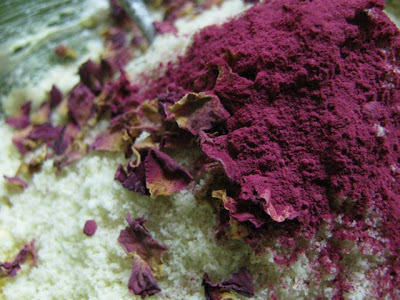 They are part of the amazing Herbies spices range that I found at Two Prickly Pears in Lygon Street. When I opened the rose petals the heady aroma took me back to my childhood. I am not sure why. Possibly because we would attempt to make perfumes with petals from the garden. I hoped the scent would remain in the biscuits but was not as strong once baked with the more dominant orange zest. The beetroot powder surprised me with a strong smell of beetroot but I was glad that this smell didn’t remain with the baking. 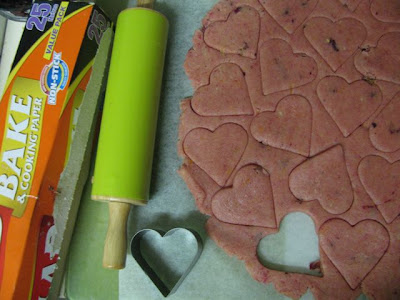 I decided to bake these biscuits at 10.30 on the night before going to my parents’ place. I was filled with foreboding and feared I would regret this as I have had a few baking spells late at night when I am waiting for something to come out of the oven and I just want to go to bed. But these biscuits were a cinch. Cakelaw put her dough in the fridge to chill and warned that the dough was so soft that it needed to be handled quickly and carefully. I didn’t chill the dough and found it quite easy to handle. It helped that I rolled it out on baking paper but I hardly used any flour. I was finished by 11.30, even with having to settle Sylvia during baking.

The dough might have been softer for Cakelaw because she is in Brisbane, which is hotter than Melbourne was on Friday (though I might need to chill the dough if baking it today with temperature at 34 C). She might have also found it harder to handle because she used larger cookie cutters. I decided to use heart shaped cookie cutters because they seemed appropriate for pink rose biscuits but you should check out Cakelaw’s gorgeous biscuit shapes – baby bottles, prams, ballgowns and shoes. 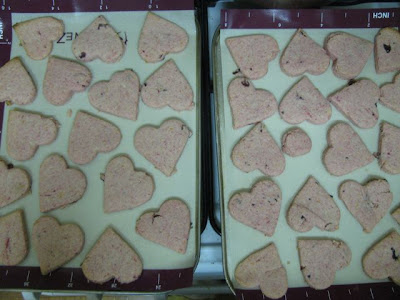 We loved these biscuits in our house. E was very impressed. They were a bit like pretty shortbreads – pink, very soft and buttery with a subtle fragrance and studded with the odd rose petal. I was impressed that they stayed pink. I was a bit unsure of the beetroot powder and didn’t use much, partly because I was worried it would flavour the biscuits but I think I will try using more next time. One reason I bought it was that it seems a more natural way to colour food than the usual chemical-filled pink food colouring. 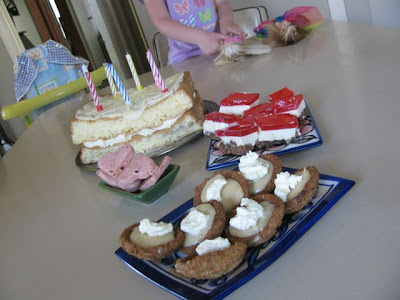 After the barbecue on the weekend, we had a birthday cake for Dave. My mum had made a sponge cake with cream in it. As usual, she couldn’t resist making a few other treats. We were all amazed at her take on gluten free jelly slice. This is a favourite of my childhood, which I rarely have now because I have not come across a gelatine-free version (but I must try one with agar agar). It had well cooked Aunty Kath’s choc chip cookies and butter on the base, condensed milk, cream cheese and lemon in the middle layer and jelly on top. She made delicious little caramel tarts with gingernut crusts and some caramelised leftover condensed milk. My pink hearts joined the spread and were appreciated but too many in the family are on diets that don’t allow such food.

E was poorly and stayed at home but Sylvia and I had a nice time. She loved the swing in the yard and played with Cooper – when he wasn’t sucking on the door. My dad set up a tent in the backyard for my nieces who had lots of fun playing in it. I was amused to hear about 4 year old Ella discovering the origin of meat last week. She asked about the pork they were eating. When told it was a pig’s leg, she was asking about the pig who only had three legs. No, it was killed, she was told. Ella then quite cheerfully went around telling people about the dead pig! I was surprised she wasn’t that upset but at least she knows where her food comes from. 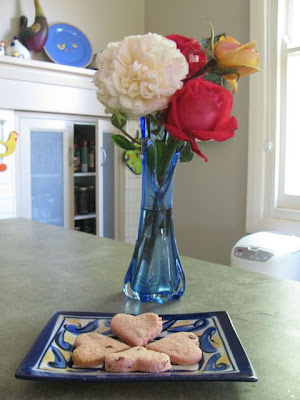 As for the rose petal biscuits, you only have to look around my parents’ garden to see where they come from. It is a blaze of colourful roses, although they are starting to feel the heat. Biscuits from the kitchen and roses from the garden are simple pleasures I highly recommend.

Mix butter, orange zest, sugar and the egg yolk in a large mixing bowl. Add remaining ingredients and mix till it comes together into a dough. At this point, Cakelaw flattened hers between two sheets of baking paper and put it in the fridge for 30 minutes but I didn’t and my dough was ok to handle. Briefly knead dough into a smooth ball.

Preheat oven to 180 C and line two baking trays with baking paper or silicone mats. Roll out dough on a sheet of baking paper to about 5mm thick. Cut shapes and transfer to prepared trays with a little room between – but the biscuits hardly spread. Bake for about 12 minutes or until just starting to turn golden brown. Remove from oven and cool on the trays.

Turn the dough out onto a floured work surface and knead until smooth. Flatten the dough with the palm of your hand, and place between two large pieces of baking paper. Roll the dough out with a rolling pin to a thickness of approximately 5mm. Roll out dough on baking paper and cut shapes – transfer to prepared trays.

On the Stereo:
The Velvet Underground and Nico