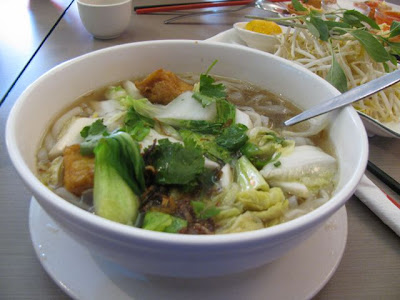 On a sunny Sunday a few weekends ago, we met Yavanna and Chris for lunch on Victoria Street in Richmond. For anyone who doesn’t know the area, there is a heavy concentration of Vietnamese grocers and restaurants along this strip. My family usually goes to Thy Thy but I was interested in trying a new place - Thanh Nga Nine.

I love Asian soups with lots of noodles and exotic flavours but they so often have fish in the stock that I have become too wary to order them. So I was excited when I read AOF extolling the virtues of Thanh Nga Nine, including an appreciation for vegetarian food extending to stock. She referred to an article in the Age newspaper, which I presume is this one with a great story of a family on an odessey of sampling 22 Vietnamese restaurants in Victorian Street over a year. 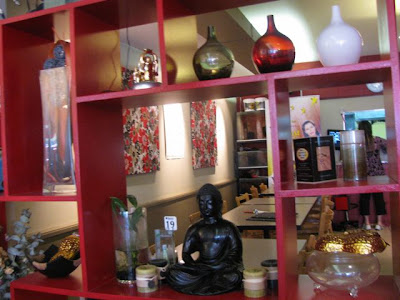 Thanh Nga Nine is a clean modern restaurant with some traditional touches like a Buddah and Asian fabrics displayed on the walls. For the Collingwood tragics in my family, there is also a signed footy jumper. In one corner is a large fish tank full of a school of fish that darted about too quickly for my camera. I rang a few days earlier and booked a table because I wanted to check it was a baby-friendly place. They had set up a high chair when we arrived and there was room to park the stroller beside the table.

While service was occasionally a bit slow, the staff were most obliging. Tea was available upon arrival but it took a couple of requests to get some water. Finally we were told that it was taking a while to get the ice. The orders seemed to be taken a little quickly for me to fully peruse the menu but that was possibly because I was feeding Sylvia, who mercifully pretended to be a good eater. So I don’t have a good memory for the dishes but wanted to share my experiences. 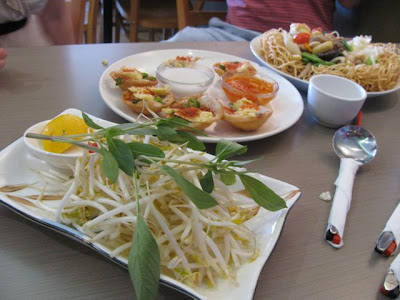 The vegetarian section of the menu was quite substantial. Some of the starters were the sort you would find anywhere – spring rolls and rice paper rolls. But I was intrigued by the vegetarian mini pancakes. I was also determined to order a noodle soup, which is such a rare pleasure. I think I also might have spied a noodle and vegetable dish like they served at the Vina Bar, my favourite Vietnamese restaurant until its recent sad demise. 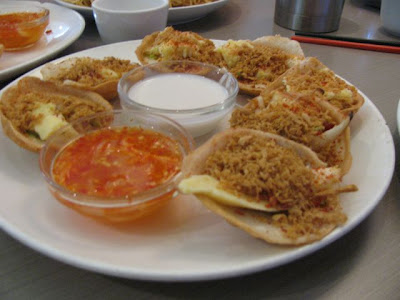 I am no fan of faux meat so it was unfortunate that I inadvertently ordered two faux meat dishes. The pancakes were light little pancakes with faux shrimp, what we think was a dab of mung bean paste and a sprinkling of what I think was faux fish seasoning. They were sort of interesting but too fishy for me. Yavanna who was sharing a plate of seafood pancakes with Chris, tasted the vegetarian version and said it didn’t taste as good.

Next my pho soup came and was full of faux meat – little dumplings and slices of some sort of white meat. I took one look and shuddered in horror. Very apologetically I explained that I did not like faux meat and had not realized it was in the soup. They kindly took it away and replaced it with a noodle soup with deep fried tofu, bok choy and bean sprouts. Not enough vegetables for me so I ordered a plate of steamed vegetables on the side, specifying that I wanted carrot and corn and broccoli like in Chris’ dish. I needed colour! Once this arrived I was very happy with my meal. The soup (pho) had a lovely subtle flavour of star anise and I enjoyed it very much with lots of flat noodles. 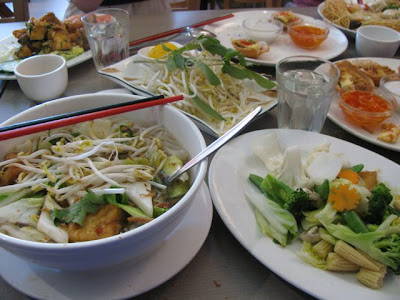 At the end of the meal, one of the waiters came to ask how our meal was. We said it was great but I talked to him about the faux meat issue. He said they had been considering rewriting their menu to make this clearer. I was impressed that he said his mother had recreated the pancakes for vegetarians because they were so popular. I stressed that I didn’t like faux meat but I know others would appreciate it.

Meanwhile the rest of the dishes were enjoyed. E had a chicken dish with lemongrass and Chris had an impressive spread of lots of seafood and noodles. But the starring dish of the day – for me at least – was Yavanna’s choice of deep fried eggplant. It was soft inside and crispy on the outside, had lots of peanuts and chilli and a delicious marinade but I can’t tell you any more than that. I will tell you to go and order it and taste how good it is for yourself. Even E, who is an avowed enemy of eggplant thought it delicious. 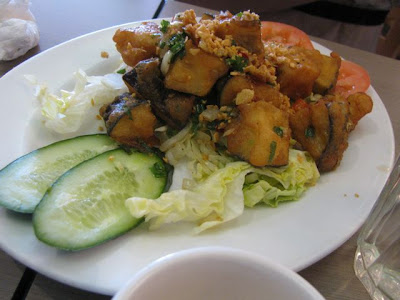 Despite my problems with the faux meat, it was a great meal out. I liked being able to try different dishes than the standard ones and appreciated the attitude of the owners in catering for vegetarians and families. No wonder it was busy. The food was not only delicious but also cheap. We walked away having paid $66 for the four of us for starter and main course. With interesting conversation and Sylvia doing her little dance in the highchair, it was a very pleasant lunch.