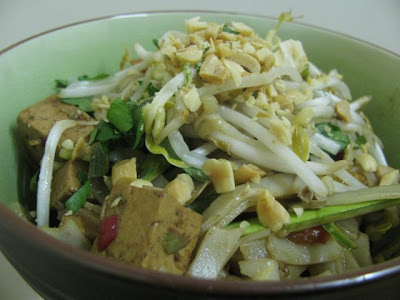 Every now and again I feel the need to recreate a meal I love eating in restaurants but am intimidated about making at home. Pad Thai is just such one of these dishes. I love it with the flat noodles, chunks of tofu, crunch of peanuts and fresh bean sprouts. Making it at home had the advantage of being able to make it my way. Lots of vegetables and no egg.

I decided to try it a few weeks back. I bought the tamarind paste and bean sprouts which are not usually in my kitchen. I searched recipes. I found Pim’s sage advice via Nupur. Pim takes your hand and walks you thought the elements of Pad Thai with lots of tips and chats about the sour, salty, sweet and chilli flavours. She is into her meat and seafood so I turned to Andrea’s Easy Vegan Cooking for a vegan recipe full of tofu and vegetables. 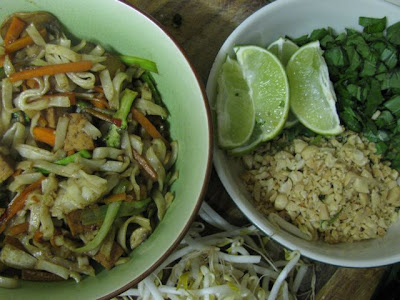 My first attempt was not quite right. I was intimidated enough to prepare everything before I started. The sourness of the gloopy tamarind paste gave the right flavour but the chillis weren’t hot enough and the long life soft noodles were too few and too soft. But I know I was close. 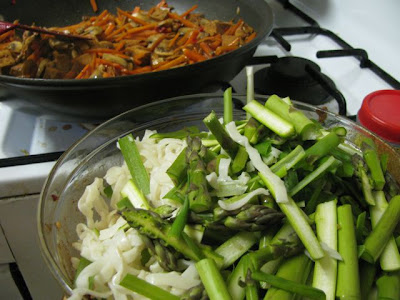 This week I returned to Project Pad Thai. I bought dried noodles which worked better – other than when I tipped them down the sink by accident when trying to drain them and had to scoop them up. I was amused to see the brand was Pandaroo and I thought the packaging was cute. The red chilli I bought gave a pleasing warm tingle, which is all I want given that I am a chilli wimp. I also added more tofu because I felt the first attempt was lacking a little there. 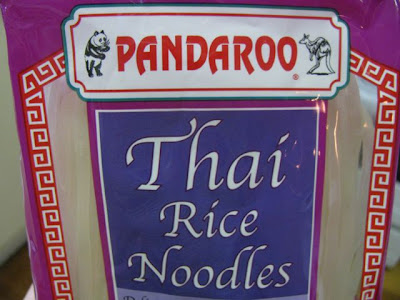 The ingredient, other than tamarind, that really challenged me was palm sugar. It is something that I have never seen before and didn’t really know what it was. I looked in small ethnic supermarkets without luck and then found it in the large local supermarket. It came in lumps that reminded me of sugar lumps but it was more sandy and together. I have seen that you can grate or chop it so I chopped it into small pieces and mixed it into the marinade where I think it dissolved. I am not sure it made the marinade very different to agave syrup that I used the first time. Now I have a box of palm sugar to use but I guess I can substitute it for regular sugar in baking. In future I probably wouldn’t bother buying it but I think tamarind is important to the flavour. 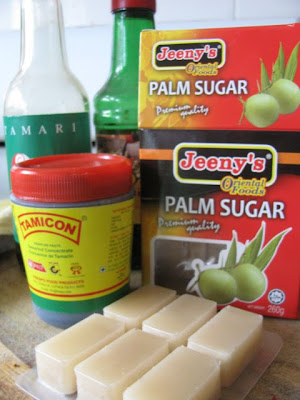 The second time I made the Pad Thai it was much better. The noodles and tofu seemed right and I loved all the vegetables. I forgot the lime wedges but we weren’t too bothered because last time E overdid the lime juice on his. I think bean sprouts are necessary but I hate having to buy a whole packet in a plastic bag when I only want a handful, especially as E doesn’t like them. As for fresh coriander, I avoid it and tried both basil and parsley which are ok but if you can stomach coriander it is probably more authentic. 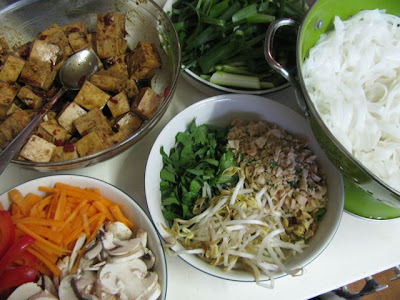 I am pleased with the below version of the recipe. There was a little marinade leftover but Pim says it is better to have too much than too little and she advises that it can be kept in the fridge for next time. I recommend keeping it rather than tipping it all in as the noodles should be just coated with no sauce sloshing around. The preparation is very important as there is very little cooking involved. I quite enjoyed the slight crunch in the vegetables but make sure they are chopped into thin matchstick pieces.

Some of you will make Pad Thai without much fuss or sweat. But if you want help in making a good vegan one I suggest checking out Pim’s advice and I hope this post will also help. We are not going out for dinner very much at the moment and it is a small consolation to be able to have a favourite restaurant meal at home. I will be returning to this recipe and hope that eventually I will be more relaxed about it. It really isn't that difficult! 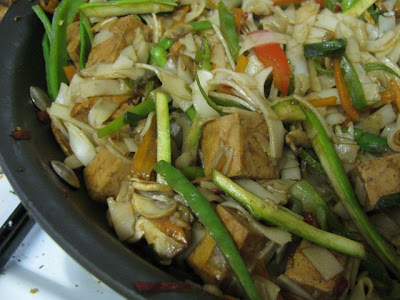 Mix all the marinade ingredients together in a medium bowl and taste to check the flavours balance together. Toss tofu chunks in it so they are covered. Marinate for at least 30 minutes. You will probably need this time to prepare the vegetables if you cut at the same rate as me.

Now pour boiling water over noodles and leave for 20 minutes, then rinse under cold water.

While tofu and noodles are set aside, chop the vegetables. Then heat oil in a wok or large frying pan over medium heat. Use a spoon or fork to remove the tofu from the marinade. Stir fry tofu, carrot and mushrooms for about 4 minutes. (If you want to have leftovers, you can make up to this point but I found that the noodles were not great the next day.) Add noodles, asparagus, snow peas, spring onion and enough of the extra sauce to coat everything and stir fry for 1-2 minutes. Put any leftover marinade in fridge for another time.

To serve spoon some noodle mixture into a bowl. You can serve on a table with bowls of bean sprouts, peanuts, coriander and lime wedges for everyone to help themselves or you can arrange these on top of each bowlful.

On the Stereo:
At First Sight, Violets are Blue: The Stems