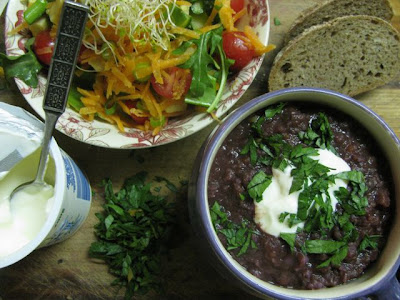 I strolled down to Sydney Road, Brunswick last week and hit the shops before it became too hot for such walks. I returned home with a swag of goodies. Most exciting and intriguing were a packet of dried chestnuts from The Mediterranean Supermarket and a bunch of purple carrots from La Manna Fresh. 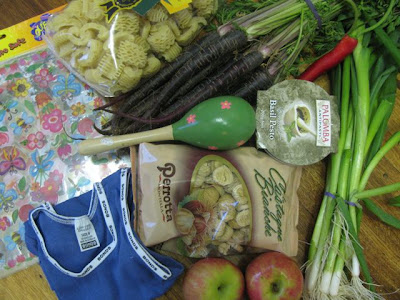 If only I had these carrots for my purple post but it was not to be. Prior to my delight at discovering this bunch, purple carrots were as elusive as the Scarlet Pimpernel. I have envied other bloggers their multi-coloured carrots but never considered that I might be lucky enough to find them for a reasonable price at a local fruit and veg shop. 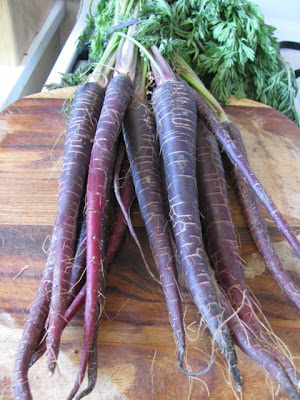 Purple carrots are a rare pleasure but it did make me wonder, if the Dutch had not been so patriotic about breeding carrots to pay homage to the House of Orange, might we take purple carrots for granted today just as we do with the common orange ones. Or maybe we would have both. Don’t they look lovely together. 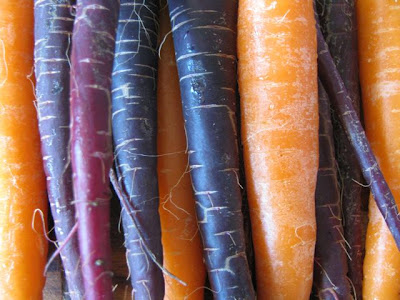 Serendipitously, Lisa had asked for root vegetable soups or salads in November for No Croutons Required, the monthly blog even she holds with Jacqueline. I knew this was an opportunity to show off my lovely purple carrots. The chestnuts were also beckoning. So I set my sights on a carrot and chestnut soup. Carrots are in many of my soups, though as background rather than featuring but chestnuts are still a bit of a mystery to me. 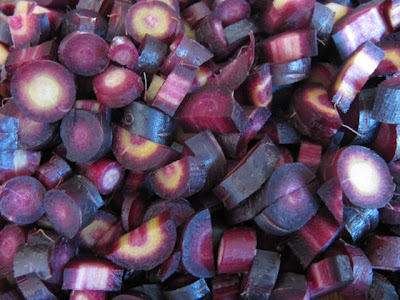 I set off in search of ideas about using dried chestnuts. Ilva in Italy seems to use them a lot – for example in her Chestnut, Rosemary and Parmesan filled Brussels Sprouts. I was pleased to see that Clotilde had a recipe for Carrot and Chestnut Soup. It seemed like I had the right idea. But I wanted something a bit more chunky with rice. Both Kevin and Sophie combined their chestnuts with lentils (oh and I had even tried the combination). So when I found some puy lentils in the back of the pantry, I threw them in. 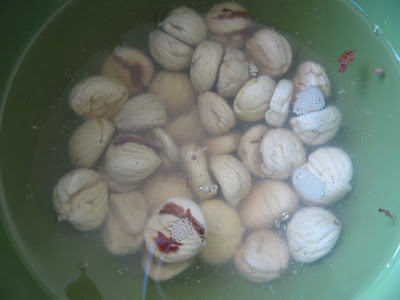 The chestnuts did not look at all attractive. In fact, they reminded me of creepy brains. It would have been helpful to have instructions for cooking them on the packet. I thought they wouldn’t take too long once soaked, based on what I read on the net, but they took forever. Well after almost one and a half hours I wasn’t sure that they were cooked. But I just wasn’t sure what they were meant to taste like. Finally, I was hungry, so in frustration, I decided just to blend the soup. 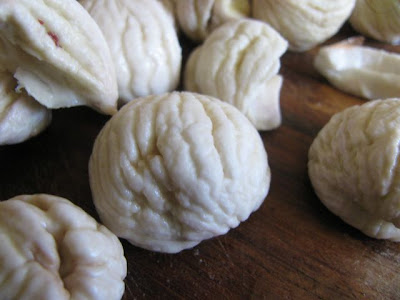 I served dinner to E with trepidation, not expecting him to like it. It was a deep purple colour and quite thick and chunky. To my surprise, he loved it. It was very rich and sweet, despite quite generous seasoning. It was good but full of unusual flavours and textures that I couldn’t quite name.

It needed something. I sprinkled parsley over it but it needed something else to lighten it. I didn’t have any parmesan and if I had had more energy I would have tried making Philippa’s parasalmond (ground almonds, nutritional yeast, salt and sesame seeds). The next day I bought some yoghurt and it gave the lift it needed. Makes me think that maybe some lemon juice might have also helped. We ate it with salad over a couple of nights and it was great with lots of vegetables. 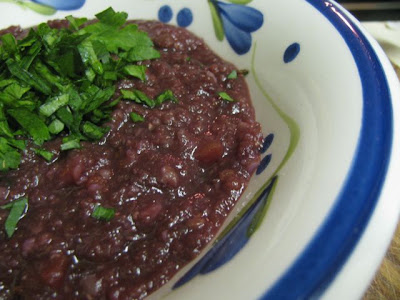 Overall, the soup was a success, albeit a little odd. I now have most of the bag of dried chestnuts to play with, if only I could be certain when they were cooked. More experiments await. I hope more purple carrots also lie ahead too.

Fry the onion in olive oil for about 5 minutes in a large stockpot. Meanwhile drain the chestnuts and remove any brown bits of shell. Roughly chop the chestnuts.

Blend and check seasoning. Add a little more water to thin a little if it is too thick. (I found I needed more water when reheating leftovers.) Ladle into bowls and top with yoghurt, parsley and black pepper.

On the Stereo:
The best of Jack Jones