Pizza for the Impatient 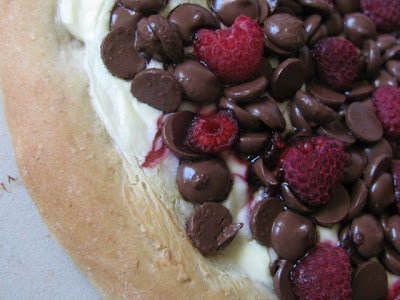 I did it again! I bought fresh yeast and then was compelled to use it before it lost its zing. I made a great zucchini bread, which I hope to share soon but most of my yeast baking over the last week has been pizza.

Soon after I started blogging, I was amazed to find Katie at Apple and Spice making a yeasted pizza base that went straight into the oven without any proving. I get a little nervous about working with yeast and was impressed with the bold nonchalance with which she treated it. The very idea that I didn’t have to wait for yeast to rise seemed a great innovation. I meant to try it straight away and then I was distracted by other recipes. 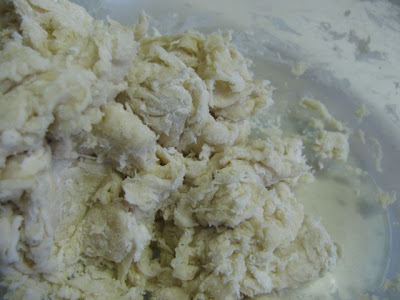 I love the idea of waiting around for bread to rise and develop but often I want my loaf now. As the days warm up as we rapidly approach summer, I have less patience for bread. Having yeast to use in hot weather is no fun. Lately we have had days when I couldn’t bear to turn on the oven, and the heat zaps me of energy and motivation. So I have seized upon the cooler days (oh blissful 25 C) to bake. Even then, organizing myself around Sylvia is a bit of a challenge. I have found that Isa’s pizza base is great but you do need some time to do it. So I decided the time was right to try Katie’s pizza. 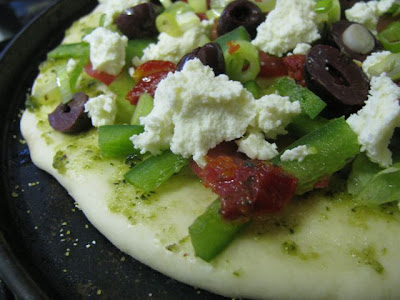 The first time I tried it, I followed Katie’s instructions and rolled it out as soon as I had mixed the dough. It was amazingly light, thin and unleavened. We had pizza with pesto, tomato, green capsicum, sundried tomato, olives, ricotta cheese and spring onion. I meant to make salad but didn’t manage to get organized. The pizza was quite small and not that filling. I should have known when the dough was about the size of my fist. 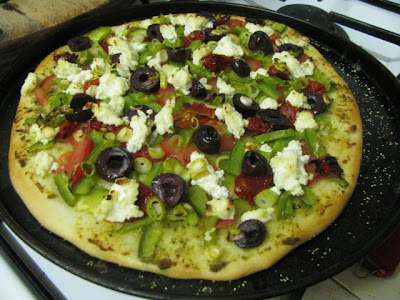 The dough was so easy to make that it seemed the ideal opportunity to finally try a dessert pizza. I mixed some honey and raspberries with ricotta and topped it with choc chips. I was pleased that when I left the dough for a short rest and used my hands rather than a rolling pin to stretch it, the pizza base was a little thicker and more bready. The topping was ok but not great. E was not at all enthused. 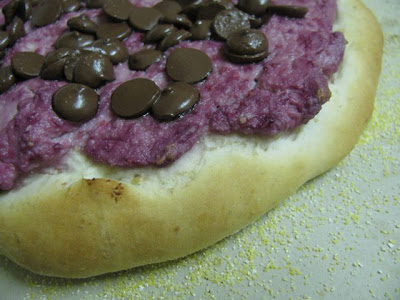 The next morning I decided to try it again but with cream cheese and nectarines. But when I opened the fridge to look for cream cheese I found some beetroot dip had spilled everywhere and in trying to clean it up I tipped blueberries all over the floor. At the moment Sylvia started crying. The pizza had to wait a few days till I found the time. 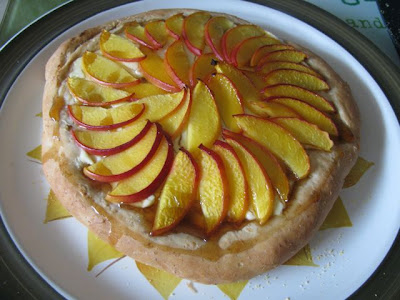 The cream cheese and nectarine topping was a great improvement on the ricotta job but I ran out of bread flour and added 1 teaspoon of gluten flour (vital wheat gluten) and some wholemeal flour. It was quite stodgy and I wasn’t sure it was cooked enough in the centre. However, a drizzle of maple syrup made it feel both decadent and suitable for breakfast. 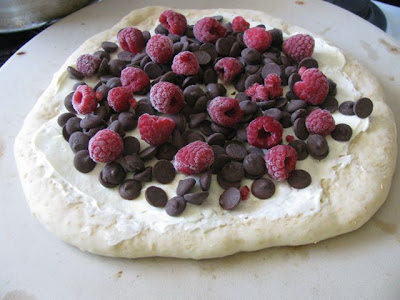 Yesterday I finally found dessert pizza nirvana with a winning combination of cream cheese, chocolate and raspberries. It was creamy and chocolaty with the tart berries studded throughout. I had thought I would need some extra sweetener when it came out of the oven but it was sweet enough. Then after leaving it for about 10 minutes the chocolate was even more melty. Even the pizza cutter tasted good after making its way through that molten mess.
It was so good that E was swooning over it. It took me great self control to save some for dessert and to be nice and leave him some. It was so good that I didn’t care that Sylvia is starting to move about more and is now finding her way into the cat food bowl and our CDs or that Zinc spent the day miaowing at me to let her out even though it is too hot for her sensitive white fur, or that feeding Sylvia is a battle that zaps my energy or that I am behind in the housework as usual. This pizza is far better than a bex and a lie down. 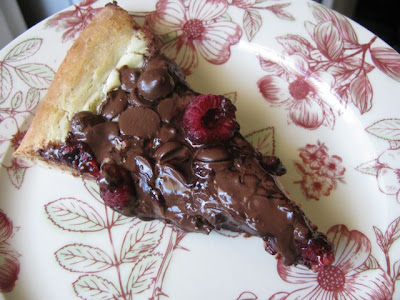 Now I will be tempted to buy more fresh yeast just so I must make more chocolate pizzas. But then again, you don’t need an excuse for pizza that tastes this good and is ready in just over half an hour.

I am sending the chocolate raspberry pizza to Susan at for her weekly Yeast Spotting that continues to inspire me to bake interesting bread.

Preheat the oven to 190 C. Mix the yeast and sugar in a medium mixing bowl till the yeast is liquid (or if using dried yeast mix with sugar). Add water, oil and milk. Then mix in flour until it comes together into a firm but slightly sticky dough.

Lightly knead for a few minutes on a lightly floured surface until it is smooth. Use a rolling pin to roll out to about 3-4mm thick and place on a baking tray that has been well dusted with polenta (Katie recommends you heat the tray but I didn’t for the savory pizza).

Arrange the toppings on the pizza and bake for 15-20 minutes until the crust is golden brown.

*Alternatively you can replace choc chips and/or raspberries with 2 nectarines thinly sliced and a drizzle of maple syrup (note to self - try it with some sugar crystals sprinkled on the nectarine before cooking).

Mix the yeast and sugar in a medium mixing bowl till the yeast is liquid (or if using dried yeast just mix with sugar). Add water, oil and milk. Then mix in flour until it comes together into a slightly sticky dough. Lightly knead for a few minutes on a lightly floured surface until it is smooth.

Turn on oven and heat to 190 C with a pizza baking stone inside. While oven is heating, let dough rest for 15 minutes in the mixing bowl – I didn’t clean or oil mine – covered by a damp tea towel. This time is quite flexible as I left it for different times depending on what I was doing while it rested.

The dough wont rise much but will puff up a little. Punch it down and press and stretch it gently to be about 5 mm thick, although it will be thicker on the outside which is ok because this part cooks more.

Have your topping ready and take pizza stone from the oven. Sprinkle polenta on the tray (but if you forget that is ok as I found out) and place flat circle of dough on the tray. Spread the cream cheese almost to the edge, scatter choc chips and then raspberries on top.

Bake for 15-20 minutes until the edges are golden brown. Sit for at least 5-10 minutes before eating because, speaking from experience, it will melt a bit more once out of the oven and will burn your mouth if you eat it straight away.

On the Stereo:Scott Walker: The Collection
Posted by Johanna GGG at 23:02