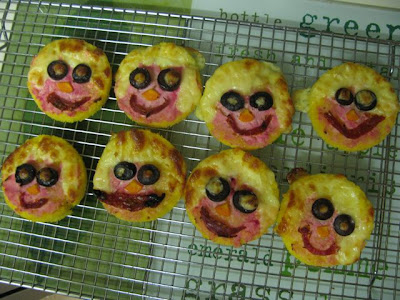 Another weekend, another family birthday. They come thick and fast at this time of year but I am glad this is the last of them before we start the festive season. Today was the 5th birthday of my twin nieces Grace and Ella. I originally had said I would do the cake but as Rabbie Burns says, "the best laid schemes o' mice an' men / Gang aft agley." 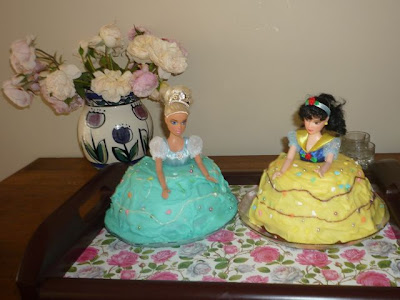 The kiddies party in the park was at 10am, which is not a good time for Sylvia and me. We are not morning people and only managed to get there at 11.30 so it was lucky that my mum and Susie took over cake duties and taking a photo for me. They made the girls two gorgeous Barbie doll cakes with butter cream skirts decorated with glitter icing, icing hearts and shiny silver cachous. By the time we arrived the cakes looked like this: 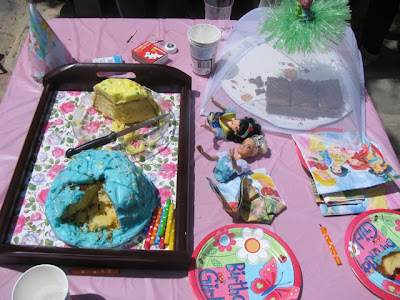 My sister Fran managed to get in first with Sylvia’s Christmas presents. She had bought her some very cute silver sandals but worried that Sylvia would outgrow them soon so she gave them to her early. Sylvia is not even crawling yet so she doesn't wear shoes generally but I can see why Fran could not resist their charms. Unfortunately the moskitos felt the same way about my blood and kept coming back for more. 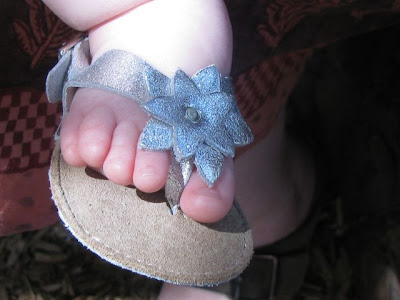 After the morning party, the family had a barbecue at home. A simple affair of sausages (with vegie sausages for me) and salad. Due to the heat and various diets, I decided against baking and made little polenta pizzas with faces instead. 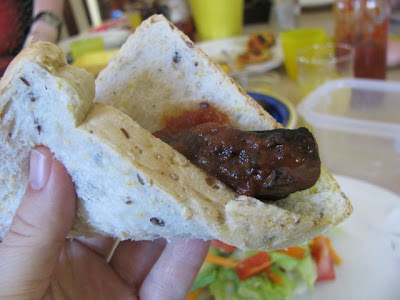 I thought they would be good gluten free party food but Grace was not keen on them. Susie, who is also GF, liked them and so did other members of the family. They were quite large for party nibbles and I am not sure how easy it would be to make lots of them. I only got about 8 of them out of three-quarters a cup of polenta. But I would make them again.

After lunch I went for a swim with my 7 year old niece Maddy. She made me feel old when I told her that I remember when the area of Geelong where she lives was just fields and she started talking about dinosaurs. She also was amazed to find my car was 21 years old – ‘I didn’t know cars could last that long’, she said. 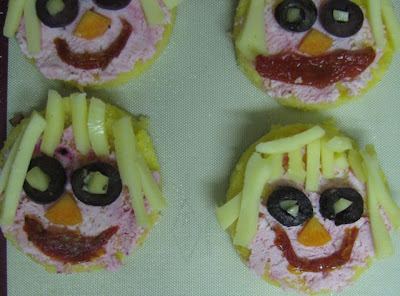 While we were playing in the pool, my mum made the Christmas pudding with some dried fruit I had soaked over night for her. I have made the pudding the last few years but this year I have less energy for it so mum helped. I just wish I could have been here to see how she does it, especially how she fits the mixture into a teatowel to boil it. When we got back, the pudding was merrily boiling and Sylvia had been awake for about 6 hours with only a 15 minute powernap but was playing on the rug quite happily. I was glad that she slept soundly in the car on the way home.

To make polenta pizza faces: I made up polenta in the microwave and spread it as thinly as possible in a shallow dish to cool. Then I cut round circles and placed them on baking trays. I spread each circle with some ricotta mixed with a little beetroot powder colouring. This not only represented pink skin but also gave something to hold the features of the face. Eyes were slices of olive with a small piece of cheese inside them, the nose was a thin triangle of carrot and the mouth was sun dried tomato. Then I cut sticks of mozzarella cheese and arranged it as the hair. Other things I might try when doing this again include as capsicum, capers, green olives with pimento in them and grated vegetables for hair. I baked them for about 15 minutes at about 220 C. 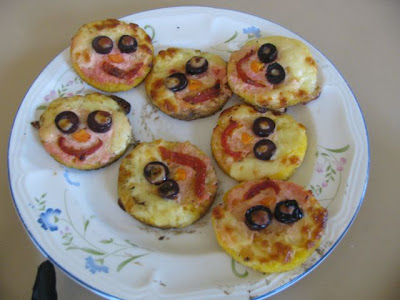 They looked cute but I wished that I had baked them with the bottom side up first to make it crispy – as I did with the polenta pizza tart. The bottoms were a little soft for my liking. However, this problem was solved at my parents’ place when we decided to put the pizzas on the barbecue. It warmed them up and the bottoms were brown and crunchy. I don’t have a barbecue but could heat them in a frying pan for a similar effect.

On the stereo:
The Colour of White: Missy Higgins