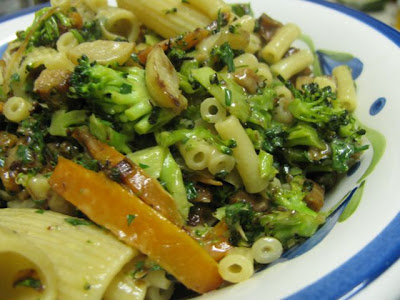 It is not yet summer and already we are suffering a sweltering heatwave. Yesterday morning I was pleased to hear my favourite radio show host Jon Faine making the point about climate change that a vegetarian in a sports car is less harmful to the environment than a meat eater on a bicycle. The talkback caller belligerently replied that he wasn’t about to stop eating meat. I wish there was more discussion about vegetarianism and climate change for people like this caller.

While I would love to live in a vegetarian world, I understand that this sort of change does not happen overnight. Incremental change is much more realistic. I think that a good start would be to encourage everyone to eat less meat. I love the idea of the Belgian town , Ghent, which is declaring every Thursday to be a vegetarian day. 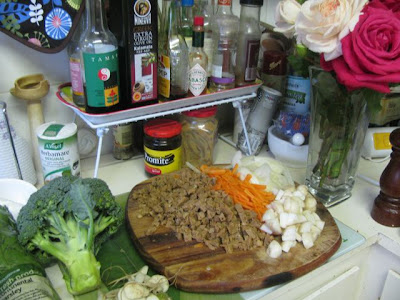 But I know that there are some people who would find this idea challenging. Since I made vegetarian sausages with gluten flour, I have been experimenting with some sausage and pasta dishes. The sausages were a bit intense and rubbery when eaten alone but were fantastic in pasta dishes. It occurred to me that this is a meal I would recommend as a good way to start reducing your meat intake. If you don’t have the desire or time to make your own vegetarian sausages (you can also try a couscous and chestnut sausage or a rice and oats sausage), they are quite easy to buy in the supermarket (in Melbourne), as I did for the third dish. If you really want your meat, you could make these dishes with meat sausages but I would never recommend such a thing.

I have consciously been trying to reduce my dairy intake so I thought I would tell you about the meals in order of with cheese, with vegan cheese and then without cheese. All are quite substantial meals that can be made fairly quickly. 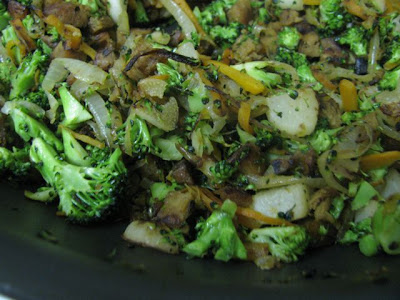 The Cheesy Pasta with Sausage and Veg (pictured at the top) was made with vintage cheddar cheese after a family afternoon tea. We were low in energy and surrounded by sweet leftovers. This dish took only 30 minutes to make and used up some of the scraps of ingredients around the house. It also had lots of vegetables, which we needed.

Mum had brought me some baby turnips she had found on special. I wanted to use up the cheese and, unusually, had cream in the house. I cooked both large and small pasta tubes to use up the dregs of packets. This was a very dairy-heavy dish that was delicious because the cheese was a really good one but it was a bit richer than I would prefer. I did enjoy having the sausages fried up into crispy bits that reminded me a bit of bacon. 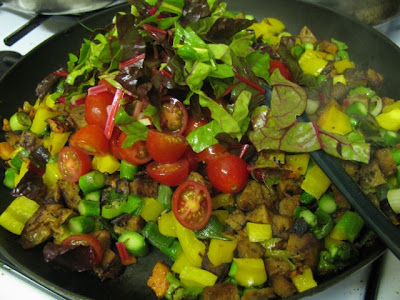 Next I made Vegan Cheesy Pasta with Sausage and Veg. After making my vegan cheesy sandwich spread, I decided to try some of this sort of spread in a pasta sauce. The result was not particularly attractive as it looked a little curdled but it tasted good, especially with the sausages. I liked the wholemeal pasta with this one because it gave the dish a more wholesome feel. E said he enjoyed this one but it had a bit much pineapple. I stared at him in astonishment and then realised he was talking about the yellow capsicum. 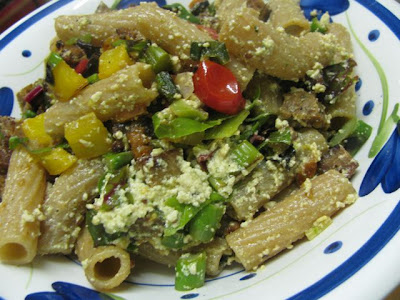 For this second dish, I decided to use up the baby silverbeet or rainbow chard in my pot. My mum had given me the pot many weeks back and I had been unsure about when they were ready to pick. By the time I made this dish I decided they were well and truly past their peak but I was determined to use what I could. Homemade sausages, homemade cheese sauce, homegrown silverbeet. This made me feel like a real homemaker. 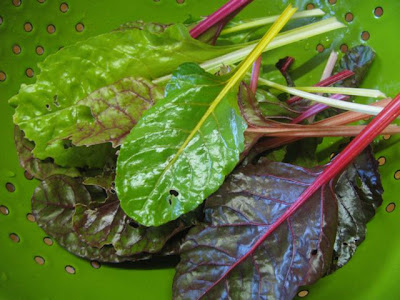 I have a before and after photo of the silverbeet in the garden. The first photo was taken soon after mum gave me the pot. 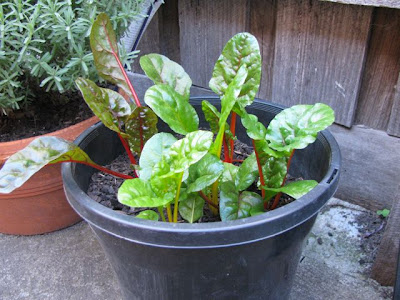 The second is taken just a few days ago. But one of the joys of a garden is the constant change. Even now it looks different. I pruned the lavendar bush yesterday and it looks like it has had a really bad haircut. Pruning is not a skill of mine but it had to be done. You can see that all the plants are drooping a little in the midst of our heatwave, except our little bay tree (is that a treelet?), which is full of new growth. 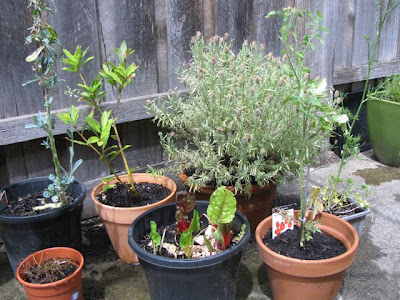 A few weeks back we also had our lemon tree full of flowers. When you think that every little flower is potentially a lemon, that is a lot of fruit. Too much for our young tree to bear. 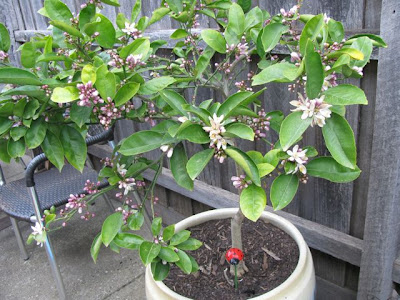 But after our heat wave there are considerably less baby lemons still hanging in there. Fortunately there are still quite a few little ones that might become lemons we can use. 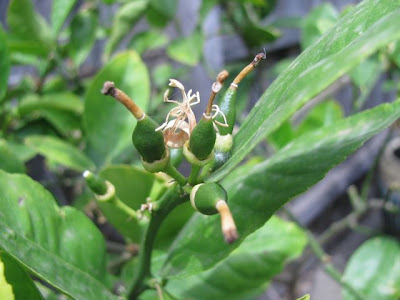 We even have a few little baby limes on our lime tree though I will be surprised if any of them become adult limes as they have an even tougher time than the lemons. I am just glad to see our lime tree doing well as it has always been the less healthy of our two citrus trees. 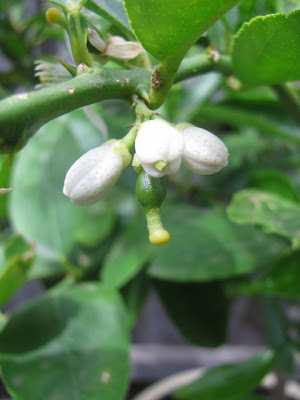 But enough of our stroll around the garden. Back to the pasta. The third dish to share is a Pasta with Sausage and Lentils. I made it a few nights back after a hot and busy day. I had been inspired by Cindy’s comment about the homemade sausages being good in Red Wine Lentils. It seemed like a good rich pasta sauce. But on the night in question, rich and heavy were not at all what I needed. I decided to make something that was far more like a warm pasta salad.

I chopped up all the vegetables, put the pasta on and dumped the lentils in a colander to rinse. All afternoon I had had a headache and suddenly I got a lot worse and had to lie on the couch. It was so simple to make that I could just tell E what to do to finish it off. By the time he was eating it, I had gone to bed. So the resulting dinner was considerably plainer than I had planned. This was a good thing when I needed to eat a little something later in the night. 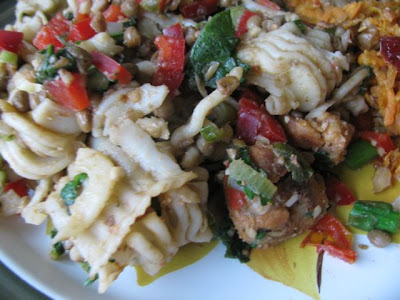 When we had leftovers the next day, I added a few things I had planned to add the previous day and served it with a VT carrot, cranberry and walnut salad. It tasted lovely and I wished I had a more appealing photo to share but the lentils make it look all sludgy. Don’t be fooled by the messy picture, pasta and sausage is just the thing for a hot November night. And if you use vegetarian sausages just maybe you can help keep the heat down a little. 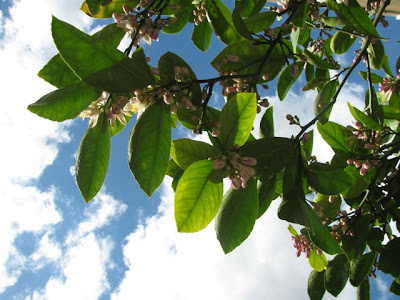 I am sending my sausage pasta dishes to Kait of Pots and Plots for this week's Presto Pasta Night (#139), an event founded by Ruth of Once Upon a Feast.

Heat the oil in a large frypan. Fry onion, sausages, carrots, turnips and garlic for about 15 minutes on medium heat. At this point I had to turn it off and feed Sylvia but I think you could just keep on going. Add broccoli and fry over medium heat for another 15 minutes until broccoli is soft. While broccoli is frying, cook the pasta in salted water as per directions on the packet. Check vegetables are cooked and take the frypan off the heat. Add cheese, cream, drained pasta and black pepper. Toss to mix it all up and serve warm.

Fry the sausages and carrots in 1 tablespoon of olive oil in a large frying pan for about 15 minutes over medium heat.

While these are frying cook the pasta in salted water as instructed on the packet and make the cheese sauce by mixing all ingredients together.

Add spring onions, capsicum, asparagus, and 1 tablespoon of olive oil to the sausage mixture and stir fry over low heat for about 8-7 minutes until just cooked but still a bit crunchy. Turn off the heat and stir in the baby silverbeet and tomatoes so they warm through. Stir in drained pasta and cheese sauce.

Cook sausages under the grill (broiler). Cook pasta in salted water in a large saucepan as directed on the packet. While pasta and sausages are cooking, chop the vegetables. When pasta is cooked, drain and add remaining ingredients to the pasta saucepan which will still be hot. Stir until vegetables are warmed through – a few minutes. Chop sausages and add to vegetable mixture. Add pasta and toss together. Serve warm.

On the stereo:
Love Dreams: his 16 most beautiful melodies: Francis Lai